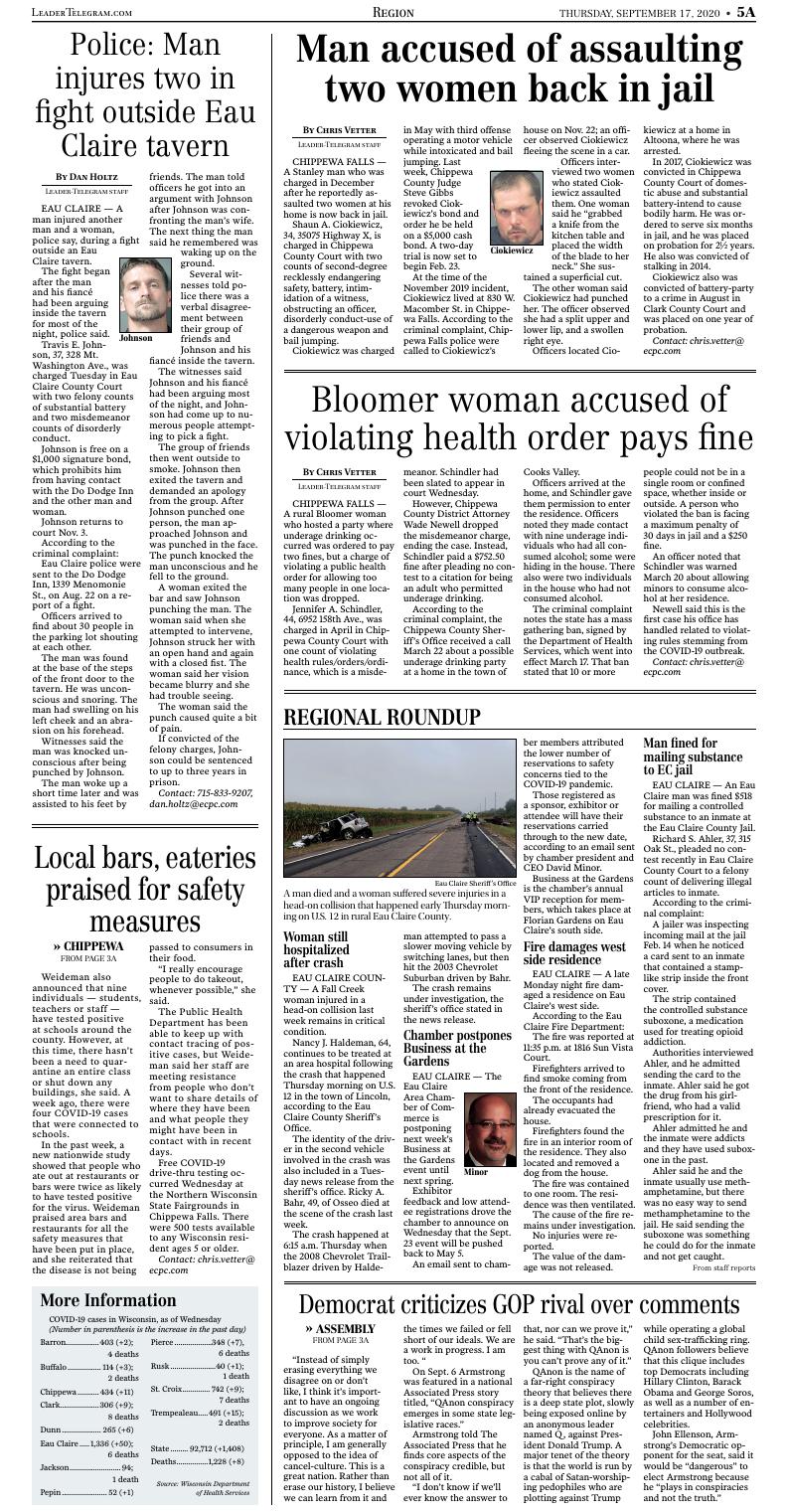 CHIPPEWA FALLS — A Stanley man who was charged in December after he reportedly assaulted two women at his home is now back in jail.

Shaun A. Ciokiewicz, 34, 35075 Highway X, is charged in Chippewa County Court with two counts of second-degree recklessly endangering safety, battery, intimidation of a witness, obstructing an officer, disorderly conduct-use of a dangerous weapon and bail jumping.

Ciokiewicz was charged in May with third offense operating a motor vehicle while intoxicated and bail jumping. Last week, Chippewa County Judge Steve Gibbs revoked Ciokiewicz’s bond and order he be held on a $5,000 cash bond. A two-day trial is now set to begin Feb. 23.

At the time of the November 2019 incident, Ciokiewicz lived at 830 W. Macomber St. in Chippewa Falls. According to the criminal complaint, Chippewa Falls police were called to Ciokiewicz’s house on Nov. 22; an officer observed Ciokiewicz fleeing the scene in a car.

Officers interviewed two women who stated Ciokiewicz assaulted them. One woman said he “grabbed a knife from the kitchen table and placed the width of the blade to her neck.” She sustained a superficial cut.

The other woman said Ciokiewicz had punched her. The officer observed she had a split upper and lower lip, and a swollen right eye.

Officers located Ciokiewicz at a home in Altoona, where he was arrested.

In 2017, Ciokiewicz was convicted in Chippewa County Court of domestic abuse and substantial battery-intend to cause bodily harm. He was ordered to serve six months in jail, and he was placed on probation for 2½ years. He also was convicted of stalking in 2014.

Ciokiewicz also was convicted of battery-party to a crime in August in Clark County Court and was placed on one year of probation.

CHIPPEWA FALLS — A rural Bloomer woman who hosted a party where underage drinking occurred was ordered to pay two fines, but a charge of violating a public health order for allowing too many people in one location was dropped.

Jennifer A. Schindler, 44, 6952 158th Ave., was charged in April in Chippewa County Court with one count of violating health rules/orders/ordinance, which is a misdemeanor. Schindler had been slated to appear in court Wednesday.

However, Chippewa County District Attorney Wade Newell dropped the misdemeanor charge, ending the case. Instead, Schindler paid a $752.50 fine after pleading no contest to a citation for being an adult who permitted underage drinking.

According to the criminal complaint, the Chippewa County Sheriff’s Office received a call March 22 about a possible underage drinking party at a home in the town of Cooks Valley.

The criminal complaint notes the state has a mass gathering ban, signed by the Department of Health Services, which went into effect March 17. That ban stated that 10 or more people could not be in a single room or confined space, whether inside or outside. A person who violated the ban is facing a maximum penalty of 30 days in jail and a $250 fine.

An officer noted that Schindler was warned March 20 about allowing minors to consume alcohol at her residence.

Newell said this is the first case his office has handled related to violating rules stemming from the COVID-19 outbreak.

A man died and a woman suffered severe injuries in a head-on collision that happened early Thursday morning on U.S. 12 in rural Eau Claire County.

Nancy J. Haldeman, 64, continues to be treated at an area hospital following the crash that happened Thursday morning on U.S. 12 in the town of Lincoln, according to the Eau Claire County Sheriff's Office.

The identity of the driver in the second vehicle involved in the crash was also included in a Tuesday news release from the sheriff's office. Ricky A. Bahr, 49, of Osseo died at the scene of the crash last week.

The crash happened at 6:15 a.m. Thursday when the 2008 Chevrolet Trailblazer driven by Haldeman attempted to pass a slower moving vehicle by switching lanes, but then hit the 2003 Chevrolet Suburban driven by Bahr.

The crash remains under investigation, the sheriff's office stated in the news release.

EAU CLAIRE — A man injured another man and a woman, police say, during a fight outside an Eau Claire tavern.

The fight began after the man and his fiancé had been arguing inside the tavern for most of the night, police said.

Johnson is free on a $1,000 signature bond, which prohibits him from having contact with the Do Dodge Inn and the other man and woman.

Officers arrived to find about 30 people in the parking lot shouting at each other.

The man was found at the base of the steps of the front door to the tavern. He was unconscious and snoring. The man had swelling on his left cheek and an abrasion on his forehead.

Witnesses said the man was knocked unconscious after being punched by Johnson.

The man woke up a short time later and was assisted to his feet by friends. The man told officers he got into an argument with Johnson after Johnson was confronting the man’s wife. The next thing the man said he remembered was waking up on the ground.

Several witnesses told police there was a verbal disagreement between their group of friends and Johnson and his fiancé inside the tavern.

The witnesses said Johnson and his fiancé had been arguing most of the night, and Johnson had come up to numerous people attempting to pick a fight.

The group of friends then went outside to smoke. Johnson then exited the tavern and demanded an apology from the group. After Johnson punched one person, the man approached Johnson and was punched in the face. The punch knocked the man unconscious and he fell to the ground.

A woman exited the bar and saw Johnson punching the man. The woman said when she attempted to intervene, Johnson struck her with an open hand and again with a closed fist. The woman said her vision became blurry and she had trouble seeing.

The woman said the punch caused quite a bit of pain.

If convicted of the felony charges, Johnson could be sentenced to up to three years in prison. 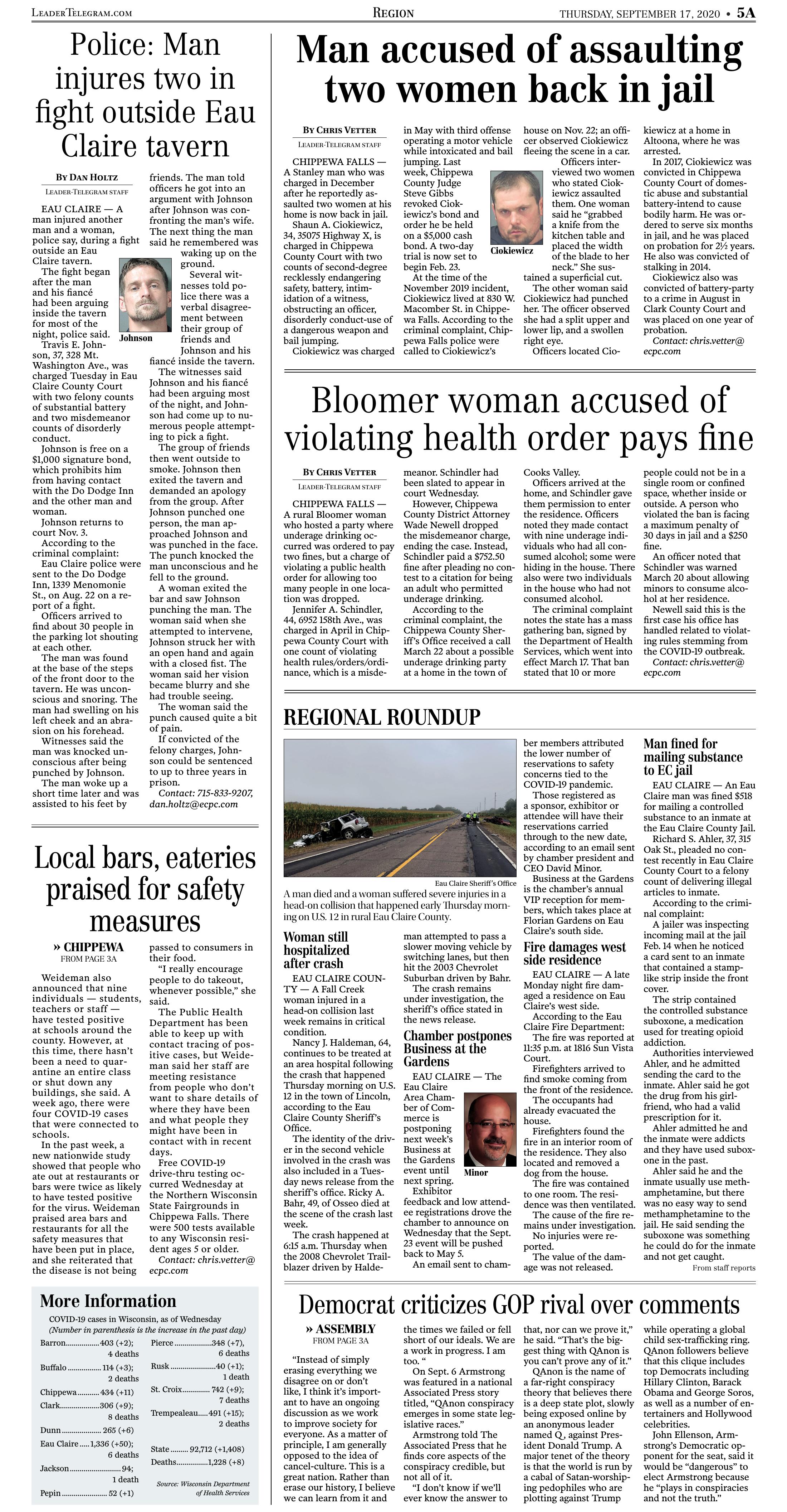