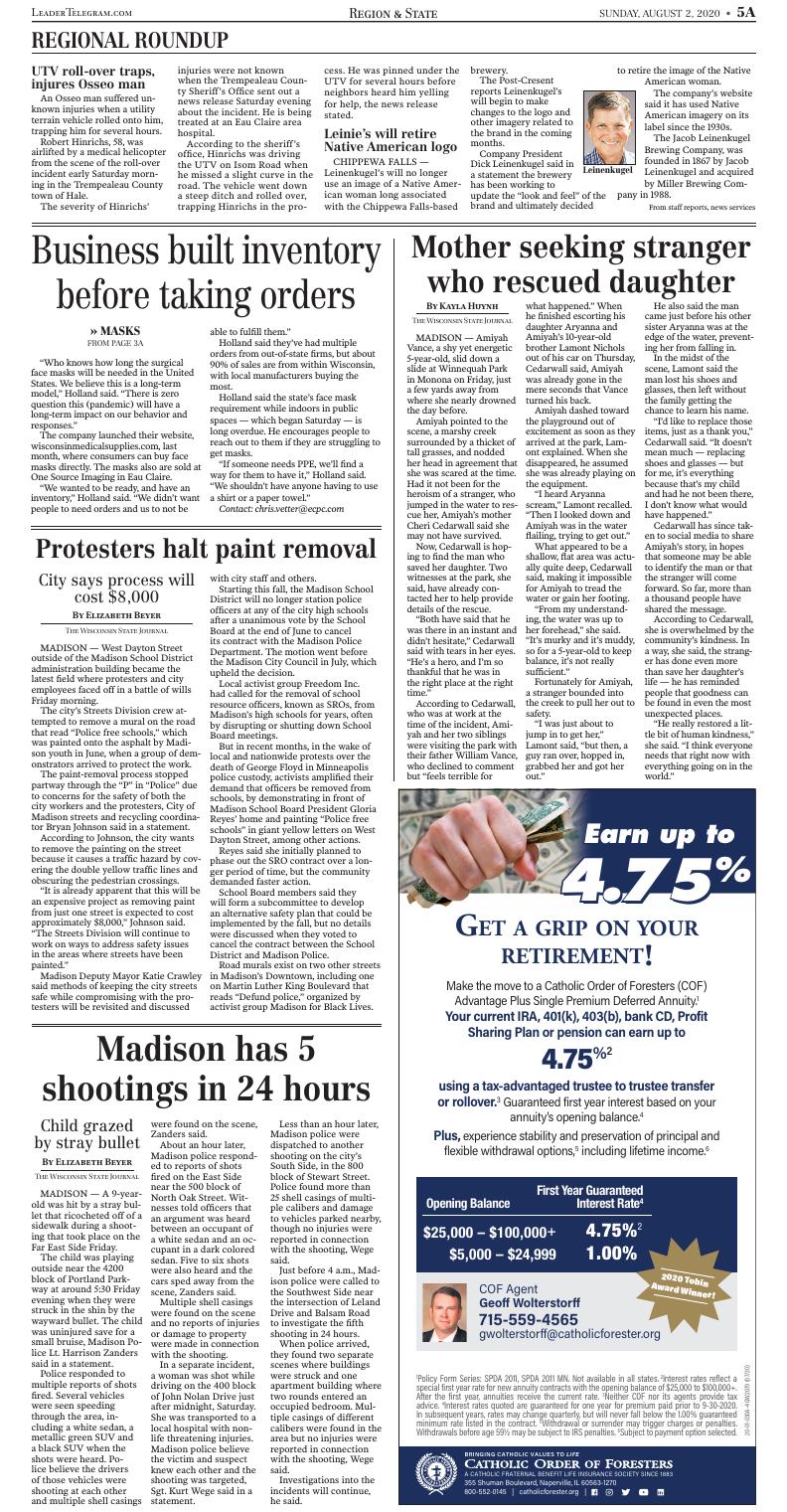 CHIPPEWA FALLS — Leinenkugel’s will no longer use an image of a Native American woman long associated with the Chippewa Falls-based brewery.

The Post-Cresent reports Leinenkugel’s will begin to make changes to the logo and other imagery related to the brand in the coming months.

Company President Dick Leinenkugel said in a statement the brewery has been working to update the “look and feel” of the brand and ultimately decided to retire the image of the Native American woman.

The company’s website said it has used Native American imagery on its label since the 1930s.

State
AP
9-year-old hit in one of five different shootings across Madison in 24 hours
By Elizabeth Beyer The Wisconsin State Journal
08.01.20

MADISON — A 9-year-old was hit by a stray bullet that ricocheted off of a sidewalk during a shooting that took place on the Far East Side Friday.

The child was playing outside near the 4200 block of Portland Parkway at around 5:30 Friday evening when they were struck in the shin by the wayward bullet. The child was uninjured save for a small bruise, Madison Police Lt. Harrison Zanders said in a statement.

Police responded to multiple reports of shots fired. Several vehicles were seen speeding through the area, including a white sedan, a metallic green SUV and a black SUV when the shots were heard. Police believe the drivers of those vehicles were shooting at each other and multiple shell casings were found on the scene, Zanders said.

About an hour later, Madison police responded to reports of shots fired on the East Side near the 500 block of North Oak Street. Witnesses told officers that an argument was heard between an occupant of a white sedan and an occupant in a dark colored sedan. Five to six shots were also heard and the cars sped away from the scene, Zanders said.

Multiple shell casings were found on the scene and no reports of injuries or damage to property were made in connection with the shooting.

In a separate incident, a woman was shot while driving on the 400 block of John Nolan Drive just after midnight, Saturday. She was transported to a local hospital with non-life threatening injuries. Madison police believe the victim and suspect knew each other and the shooting was targeted, Sgt. Kurt Wege said in a statement.

Less than an hour later, Madison police were dispatched to another shooting on the city’s South Side, in the 800 block of Stewart Street. Police found more than 25 shell casings of multiple calibers and damage to vehicles parked nearby, though no injuries were reported in connection with the shooting, Wege said.

Just before 4 a.m., Madison police were called to the Southwest Side near the intersection of Leland Drive and Balsam Road to investigate the fifth shooting in 24 hours.

When police arrived, they found two separate scenes where buildings were struck and one apartment building where two rounds entered an occupied bedroom. Multiple casings of different calibers were found in the area but no injuries were reported in connection with the shooting, Wege said.

Investigations into the incidents will continue, he said. 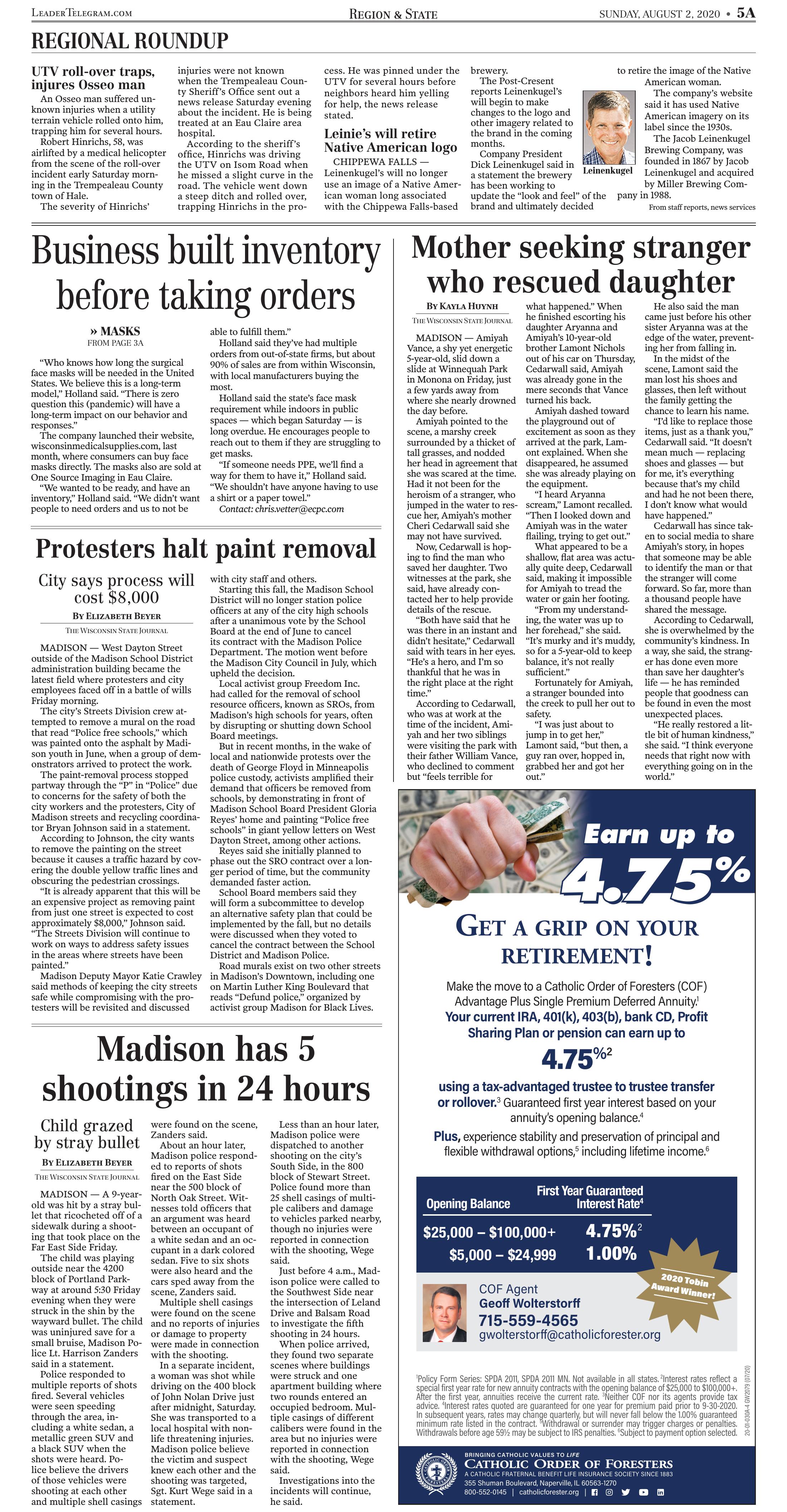