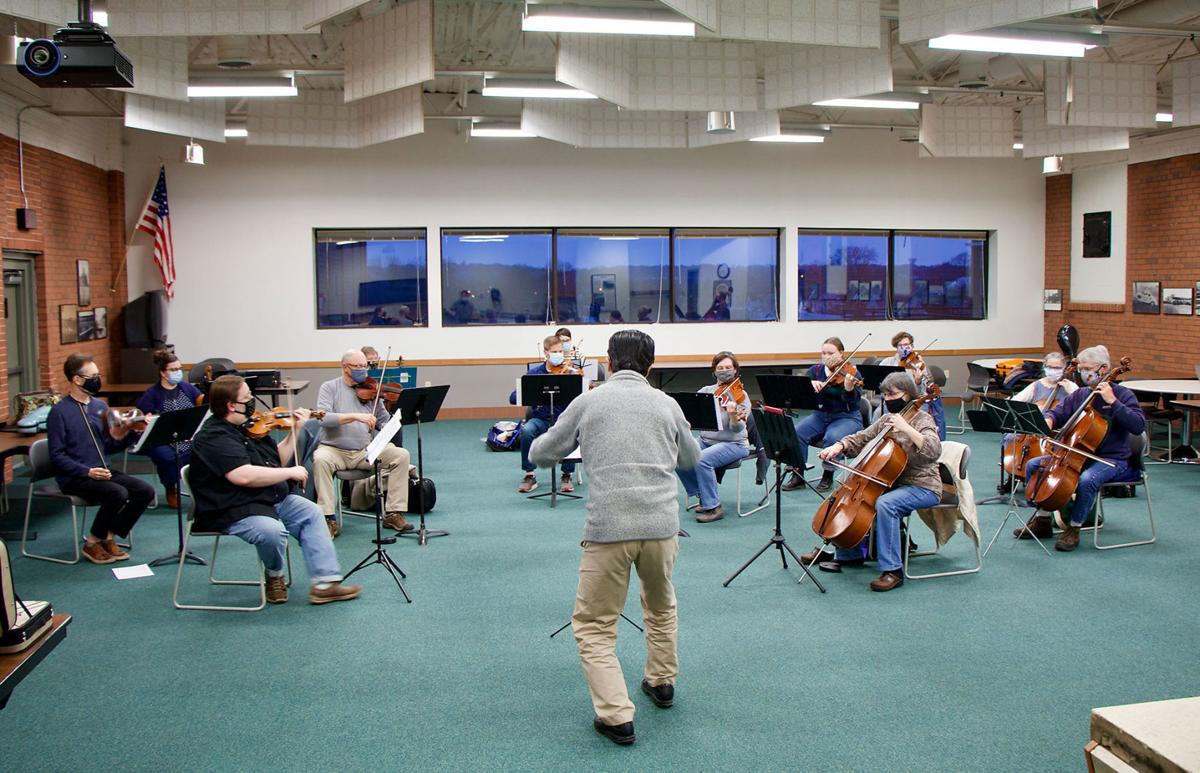 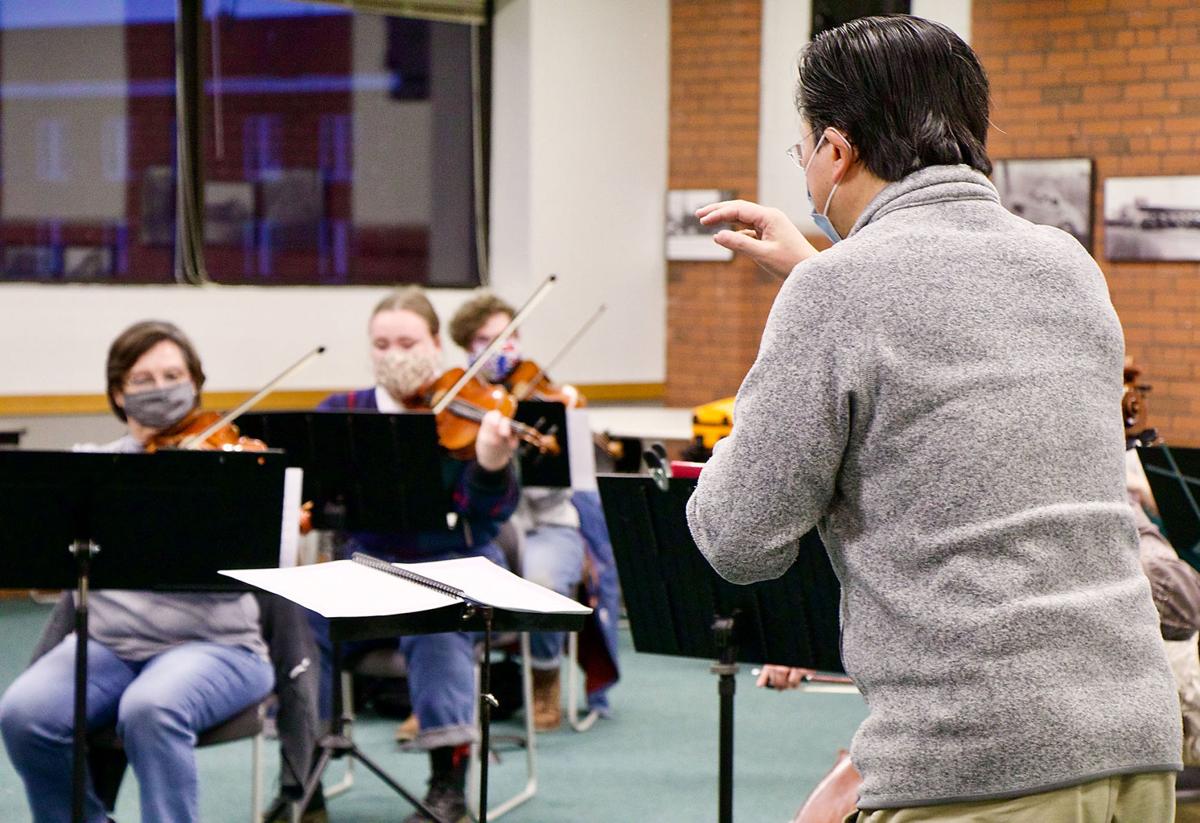 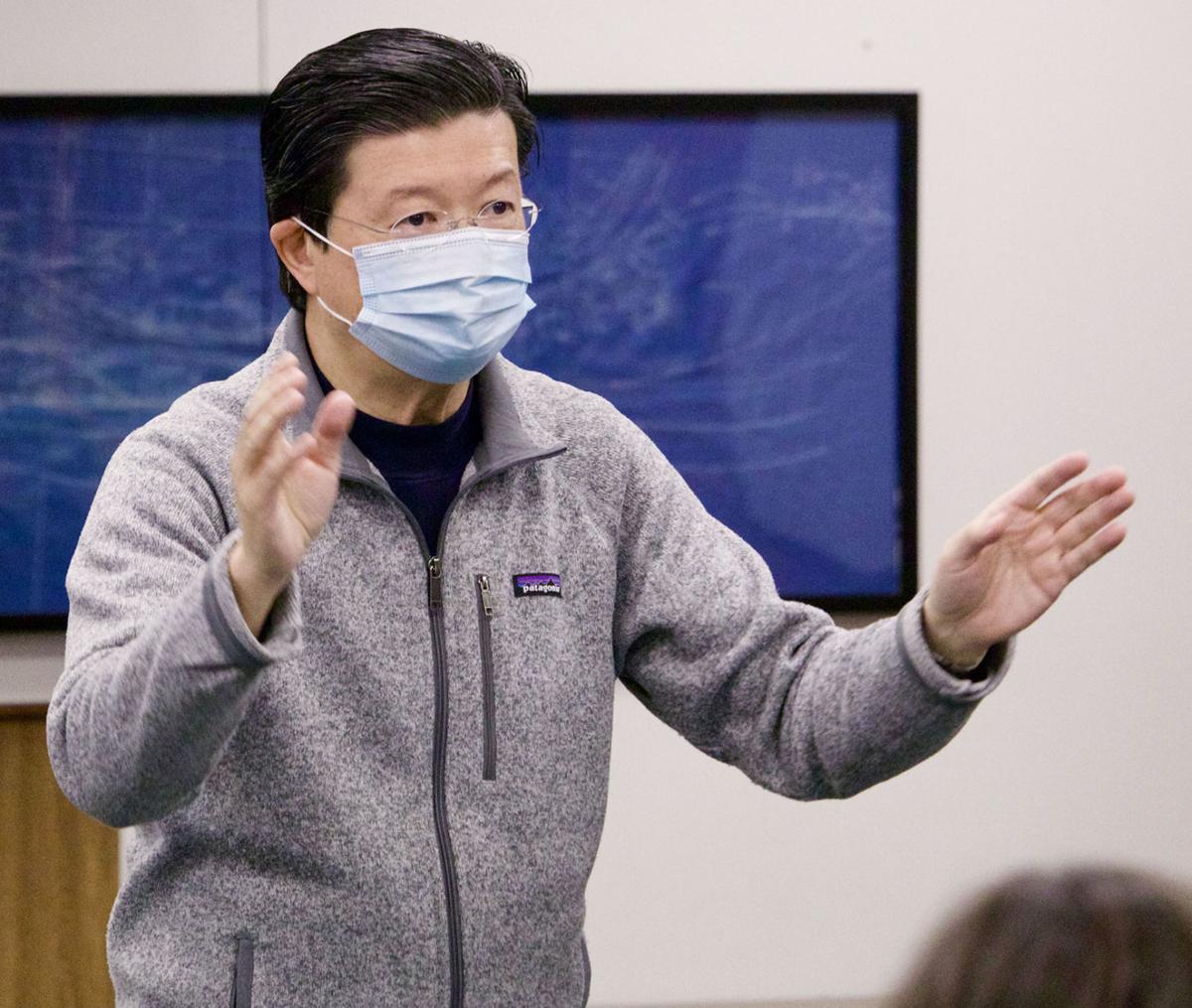 Nobuyoshi Yasuda, music director of the Chippewa Valley Symphony Orchestra, is preparing for when restrictions imposed by COVID-19 can be lifted and the orchestra can resume its regular schedule of rehearsals and concerts.

Nobuyoshi Yasuda, music director of the Chippewa Valley Symphony Orchestra, is preparing for when restrictions imposed by COVID-19 can be lifted and the orchestra can resume its regular schedule of rehearsals and concerts.

EAU CLAIRE — Nobuyoshi Yasuda used a simple but expressive word to describe what it was like to rehearse again with members of the Chippewa Valley Symphony Orchestra: “Wonderful.”

The music director of the CVSO then added a few more adjectives to characterize the elation.

“Everybody just felt, ‘Wow, this is amazing!’” Yasuda said in a phone interview. “It’s not just playing music but just feeling something together. Sometimes we forget — we play music together; that is wonderful. But we are sharing our emotions through music together. That’s an incredible sensation.”

Yasuda was referring to the time the group spent preparing a performance titled “Sharing Hope,” which, after two rehearsals, was recorded and can be seen on video premiering Saturday at cvsymphony.org.

This “CVSO Condensed” concert features a smaller group of musicians and a shorter concert length than a typical concert.

The performance was designed with safety in mind, with musicians staying 6 feet apart, not sharing music and performing selections that don’t require wind instruments so all musicians can be masked. Rehearsals were in a spacious room at Banbury Place in Eau Claire, and the performance was recorded at River Prairie Center in Altoona.

The concert comes a little more than a year since March 2020, when the burgeoning coronavirus pandemic ended the orchestra’s 2020-21 season and has continued to keep the full orchestra from resuming its regular schedule.

The idea for “Sharing Hope” was spurred by a Christmas concert featuring a string quartet of CVSO musicians that music lovers also can enjoy on video (cvsymphony.org/music). Specifically, it reminded players how much they missed making music as a group.

“I heard from many musicians when I had a chance to talk to them: ‘We are practicing or playing something at home alone, but it is not the same,’” Yasuda said.

He understood their feelings.

“I’m always passionate about live music,” he said. “I’m always telling everybody, ‘I want everybody to experience the power of live music.’ Live performance — that has been my thing.”

Under the current guidelines and restrictions because of COVID-19, however, Yasuda gladly joined in an effort to make music happen in this format.

“I thought, if musicians really, really want to play music together, that would be a great project,” he said. “I would be very happy to be part of this.”

“It felt great to make music again with the other musicians,” he said in a phone interview. “But it also felt great to see the players because for some of us it had been a year since we had seen each other and played together.”

Laura Jensen, a cellist in the orchestra, also found the experience special.

“It was wonderful to actually be in the same room rehearsing music with friends,” she shared in written comments. “In ‘normal’ times, I look forward each week to being able to play music and learn more about music with Nobu. Nobu knows a lot about the scores, knows a lot about many different interpretations, and he really encourages us to produce better and better music.”

The video has added benefit, Jensen pointed out.

“I also have family and friends far away, and I am looking forward to their hearing this concert,” she wrote. “I am playing on a cello that I bought from my first cello teacher, Paula Baker, who lives in Texas, and it will be fun for her to be able to see her instrument making music!”

Ben Cheney, a violinist in the orchestra, acknowledged that the initial moments of the first rehearsal were “a little shaky,” as it had been almost exactly one year since group had played together. But he emphasized the positive sense of working with his fellow musicians.

“It was so grounding to be in the same room with my colleagues again as you can imagine,” he shared in written comments. “For the symphony to come together again and overcome some obvious obstacles I think it dawned on me the determination to pull this off.”

For the “Sharing Hope” program, Yasuda had a number of things in mind. The musicians’ enjoyment was one, which is why the concert begins with the allegro moderato movement from J. S. Bach’s Brandenburg Concerto No. 3.

“It’s a very brilliant piece,” Yasuda said. “For musicians it’s fun to play.” And true to form, he added, “Definitely they had a fun time playing together.”

Although Jensen found fun in all of the pieces, she’s especially fond of the Bach.

“I have played it in many different settings,” she wrote. “There is a solo passage towards the end for the cello section, it involves jumping from low notes to high notes, and it can sound ragged and growly.”

It was memorable to her not only because of the music but also the circumstances in which she performed it.

“I once used this passage as an audition piece when I auditioned for the Symphony, and played it for Nobu and Ron Keezer,” she wrote. (Keezer, beloved musician and music professor at UW-Eau Claire, passed away last year.) “So I was thinking about Ron and all the people who have died from COVID, and also trying to make that passage sound good! I think we were successful.”

Giovanni Bolzoni’s Menuetto and Ole Bull’s “The Herdmaiden’s Sunday” were both part of a concert in 2019 during the CVSO’s first season in Pablo Center at the Confluence, which opened in fall 2018.

That concert highlighted the rich musical history of Eau Claire, which Yasuda learned about through his own research, finding that Eau Claire attracted top level musicians back in its early decades. In the 2019 concert’s program, he cited times that both selections were performed in Eau Claire:

• Menuetto was presented on May 18, 1914, by the Philharmonic Society of Eau Claire, conducted by Edwin Howard, at the Grand Opera House.

• Bull performed “The Herdmaiden’s Sunday” himself on April 22, 1869, at the Music Hall. As Yasuda found, Bull was considered a violinist on the level of his peer Niccolo Paganini. Local history buffs also would be interested to know that Bull would marry Sara Thorp, the daughter of an Eau Claire lumber baron, whom he met in Madison.

The two pieces are not performed very often these days, but that’s fine with the orchestra.

The Bolzoni piece stood out for Cheney.

“It sparkled,” he said. “I really don’t know much about the piece, but the mood is so playful.”

“We decided to do another take ... and I thought that we in the first violins offered more beauty than in any of the rehearsals,” he wrote. “I felt I was really home again with performing (that piece).

Yasuda chose the Air movement of Edvard Grieg’s “Holberg Suite” because he thought it captured the general mood of the current time with its slightly melancholic feeling but also featuring an “incredibly hopeful” section.

“We are hopeful but at the same time not completely happy,” he said. “The music just kind of expresses that feeling so I just wanted share that feeling with our wonderful musicians.”

That piece was a favorite of Abuan’s.

“I felt it was a nice selection for this concert because it’s short but it takes you through a lot of intense emotions from joy and hope to frustration and sadness,” he said. “It takes you back and forth between those emotions as the melody and the harmonies change between the different instruments. So I thought it was fitting in terms of this last year and kind of the intensified emotions and different experiences that we’ve had as a nation.”

Besides being powerful, Abuan said, “It just really represented this opportunity we had in a really beautiful way.”

The final piece is Gustav Holst’s upbeat Brook Green Suite, capturing the “absolutely great time” the orchestra had during this project.

“I just wanted to basically conclude music at this concert with very nice, not sophisticated, not too difficult piece, just fun for musicians to play,” he said. “The third movement ends with some kind of jig.”

The opportunity to present music for an audience, albeit through video, portends a time when the Chippewa Valley Symphony musicians can return to performing live.

“Our hope is we can actually go back to the Pablo Center and we can play music in front of our local audience again,” Yasuda said. “That day is coming soon; we are hoping that.”

Nothing definite has been decided about when performances will start up again, Yasuda acknowledged, but “we are very hopeful anyway.”

In fact, Yasuda has been busy planning a new season. He also has been taking precautions. At the time of the interview, he had received his first vaccination and looked forward to the second. “I’m going to be immortal, right?” he joked.

Jensen had received her first COVID-19 vaccination by the time they rehearsed, and is vigilant about wearing masks in public.

For her, the project brought to mind feelings of gratitude.

“I feel grateful to have survived for the last 12 months, and grateful that I still have some musical skills,” she wrote. “I really enjoy it when the symphony makes Really Big Sounds. (If you don’t think that classical music is head-banging music, you haven’t gone to many classical concerts.)”

Grateful also for her fellow musicians.

“The orchestra has been a source for friendship and musical projects ever since I came to the Chippewa Valley in 1990,” she wrote. “I look forward to a time when we can play safely for the public. In the meantime, I hope that this online concert will help people heal.”

For Abuan “Sharing Hope” brought to mind the full meaning of community.

For Cheney, the get-together meant even more than the opportunity to make music; it brought some light in a dark time.

“While COVID’s worst-case scenario is still awful, I felt a break in isolation,” he wrote. “... COVID is still contagious but I’m learning that hope, too, is contagious and so is success.”

For that matter, so is the love of music.

What: Premiere of “Sharing Hope,” a video recording of a concert performed by the Chippewa Valley Symphony Orchestra, conducted by Nobuyoshi Yasuda. The program is performed by a smaller ensemble than is typical for the orchestra because of safety considerations.

When: Premieres 7:30 p.m. Saturday and can be viewed after that on the website.