Matt Yetter performs at the 2019 Rush River Folk Festival. This year’s festival will be Saturday at Vino in the Valley’s scenic location in Maiden Rock. 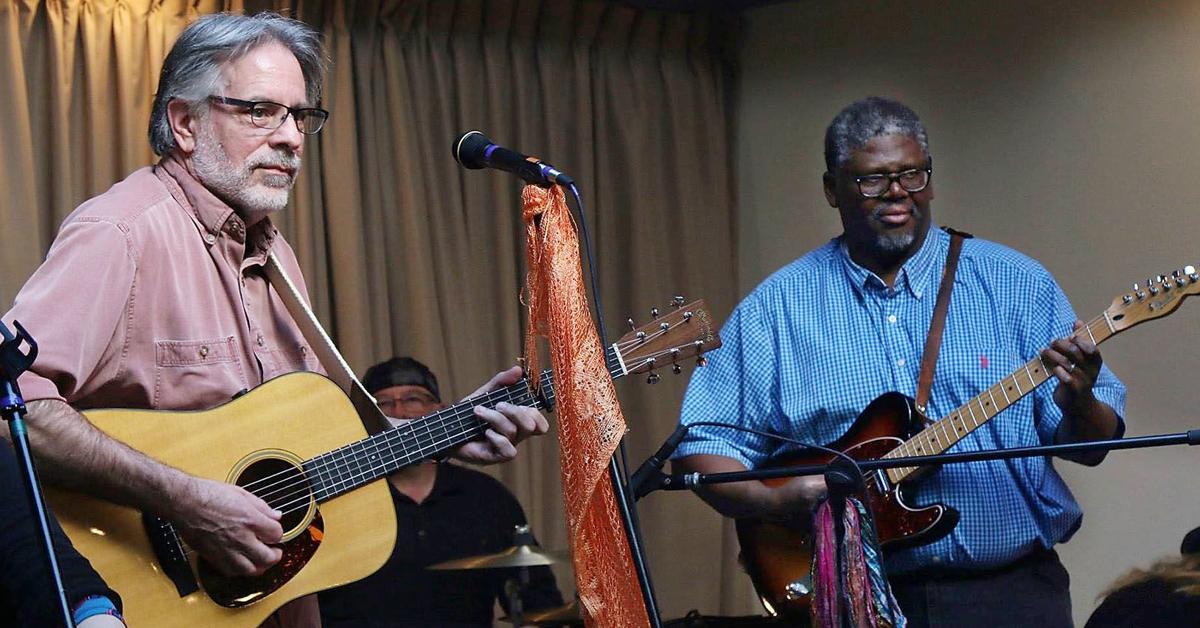 Davey J and Duffy perform at The Plus. The duo will be the first of three bands to perform Saturday at the seventh annual Rush River Folk Festival at Vino in the Valley in Maiden Rock.

Matt Yetter performs at the 2019 Rush River Folk Festival. This year’s festival will be Saturday at Vino in the Valley’s scenic location in Maiden Rock.

Davey J and Duffy perform at The Plus. The duo will be the first of three bands to perform Saturday at the seventh annual Rush River Folk Festival at Vino in the Valley in Maiden Rock.

MAIDEN ROCK — As with any music event presented during the COVID-19 pandemic, the Rush River Folk Festival will take health and safety into consideration for its seventh annual offering Saturday in Maiden Rock.

For starters, this is how Larry Brenner, owner of host venue Vino in the Valley, described the grounds. “It’s about a 35-acre field,” he said in a phone interview. “There is plenty of room to spread out.”

David Jones, producer of the festival and one of the performers, also noted the grounds’ ability to stage this kind of event.

“It is a very big outdoor space with enough room to do some genuine social distancing,” he said in a phone interview.

Jones, as part of Davey J and Duffy, will open the musical festivities at 1 p.m. The duo will be among the three acts performing two-hour sets, followed by Barrel Flash at 3:30 p.m. and Little Wing at 6 p.m.

With many stages closed because of the coronavirus, Jones said it’s especially important to continue the folk festival this year.

The size of the facility isn’t the only guard against COVID-19. In its dining room, Vino in the Valley seats people at every other table. “Then, while wiping those tables down after guests leave, we’re sanitizing those,” Brenner said. Plus, “We all wear masks. There’s sanitizer everywhere, on the bar, on tables.”

Jones led Davey J and the Jones Tones, a blues, rock and variety band that performed across Wisconsin and Minnesota for nearly 20 years. His recent musical activity includes work on two new CDs (tentatively titled “2020 Blue” and “Life is a Love Mix”), production of a weekly radio show for 99.9 FM Converge Radio in Eau Claire (“Jazz, Blues, and Beyond”), and a venture into studio production and sales of acoustic guitars (Davey J’s Garage).

Duyfhuizen is known for his Americana band Eggplant Heroes as well as solo work. He used to play in the Jones Tones, and Davey J and Duffy got started in the late 2000s.

On Saturday afternoon they will play straight through, Jones said, with each performing solo at certain points.

“I’ve always enjoyed his folk spirit and sensibility,” Jones said of Duyfhuizen. “Since he’s from New York City, I like it when he plays Paul Simon, Bruce Springsteen. He’s a big John Prine fan and has a lot of originals too.”

With Jones playing more blues as well as folk and originals, “I think our styles complement very well,” he added.

Next up on stage will be Minneapolis band Barrel Flash. Typically a trio, songwriter-musicians Julia Brown and Ross Johnson will make the trip to Maiden Rock. According to their Facebook page, their “wildly eclectic” repertoire features originals, traditional songs and covers.

Jones was especially interested in bringing Barrel Flash to the Rush River Folk Festival because of the bluegrass element in their wide palette of musical styles.

“I think that’s one area that none of the other artists (at the festival) do,” he said.

The headliners, Little Wing, consist of Faith Ulwelling on lead vocals and Tim Caswell on keyboards and guitar. They also play in the larger ensemble Left Wing Bourbon and are among the founders of the annual Blues on the Chippewa festival in Durand (which was canceled this year because of the pandemic).

On Saturday they will be presenting the band’s mix of 1960s soul, boogie and Delta blues in more of a folk vein.

“I am a great admirer of Tim and Faith,” Jones said. “Just their versatility is really remarkable as far as jazz, blues and soul. And they have a very polished but also kind of a regionally specific sound.”

Part of the Rush River Folk Festival’s appeal is its receptive audience and its rural setting, Jones noted.

“I’ve always enjoyed folk festivals myself because I think it draws just a more appreciative crowd, and I think that’s one of the things that’s consistent about the atmosphere,” he said. “It’s that people are there just to relax and enjoy the music and the food, and it feels like a destination once you get there. So it kind of replicates the feeling of a whole weekend somewhere, but it’s a one-day festival with no cost. So it’s very accessible; its very family friendly.”

Another star of the show, so to speak, is the picturesque grounds of Vino in the Valley.

“What’s special about the grounds is that you’re in the middle of a deep valley,” Brenner said. “No other houses or anything can be seen except woods.”

Two bodies of water meet behind the vineyard: the Rush River and Lost Creek. “A lot of people, while they’re waiting, they take their pager and put it in their pocket and take a glass of wine and walk down there and enjoy the river, maybe put their feet in,” Brenner said.

The music will be performed at an outdoor pavilion that’s shaped similar to an amphitheater, sloping down to a gazebo where the artists will be playing.

Brenner is optimistic the venue’s safety precautions will prove effective, and guests are welcome to wear masks.

“We serve thousands, and no one to our knowledge has gotten sick here,” he said. “We’re hoping that continues. There are no guarantees, but we’re doing everything to take care of our guests and our employees. I don’t want my employees getting sick either.”

Beyond the music and the scenery, Brenner added, “People are just so excited to get outside and do things. Outdoors is still one thing that we’re allowed to do.”

Even so, attendees have options if they feel the crowd is too large for their comfort level, Brenner added: “If they want to hear the music, they can go off at a distance by one of the fire pits or whatever and have their own little party.”

Where: Vino in the Valley, W3826 450th Ave., Maiden Rock. Guests are invited to bring blankets and lawn chairs.

When: Saturday. Festival opens at noon and features the following performers: