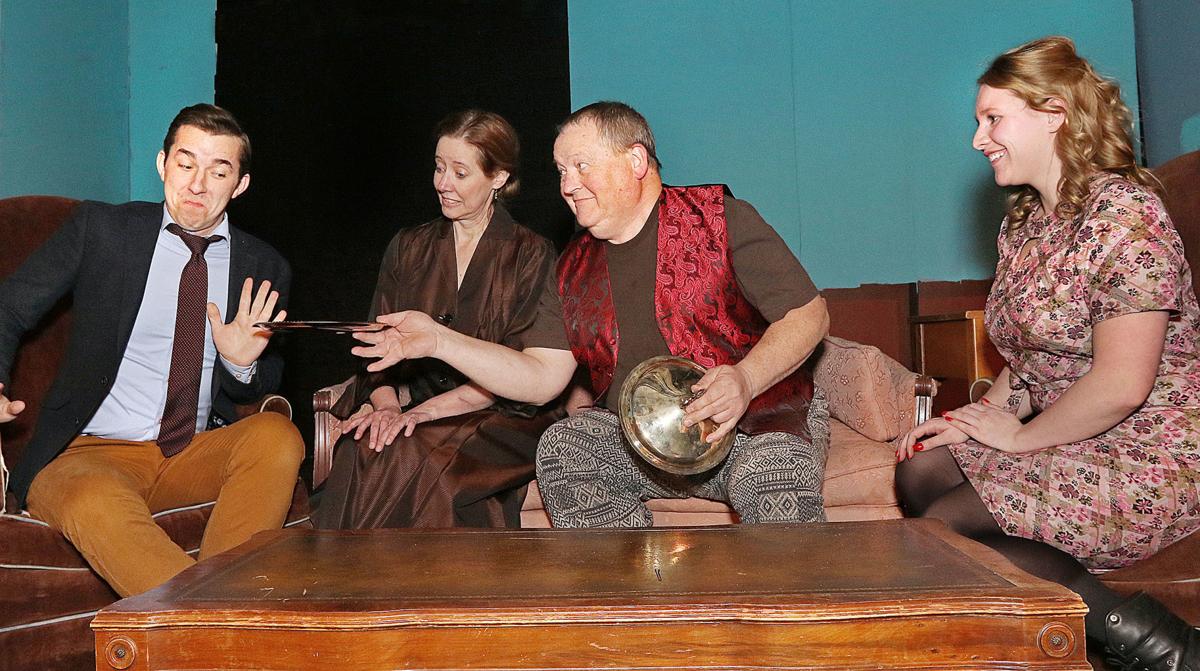 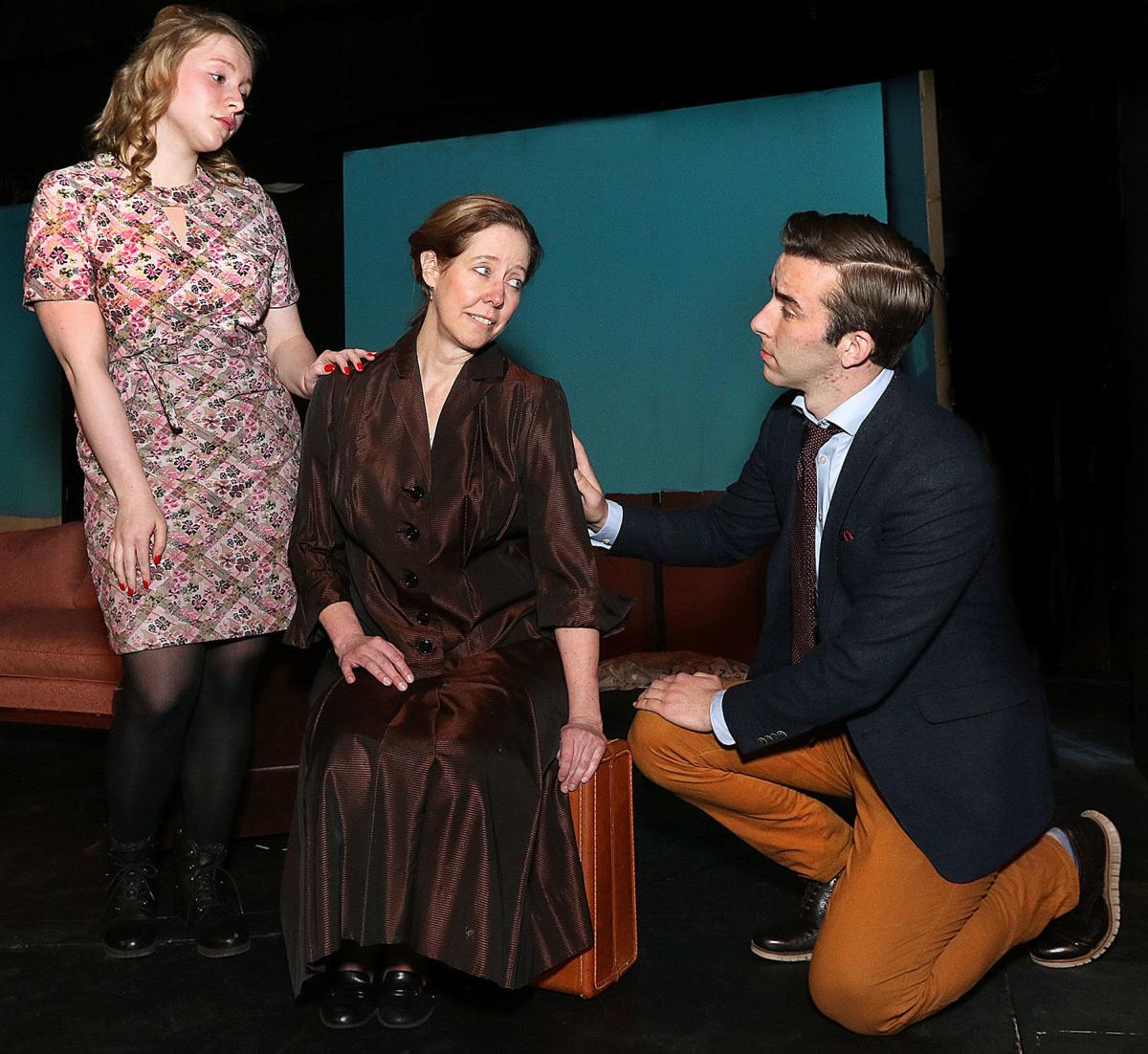 The Chippewa Valley Theatre Guild presents Neil Simon’s romantic comedy Barefoot In The Park beginning Thursday at the Grand Theatre and running over the following two weekends. Acting a visit from mother are, from left, Josie Mae Butzler, Michele Langhough and Jeffrey Peterson.

The Chippewa Valley Theatre Guild presents Neil Simon’s romantic comedy Barefoot In The Park beginning Thursday at the Grand Theatre and running over the following two weekends. Acting a visit from mother are, from left, Josie Mae Butzler, Michele Langhough and Jeffrey Peterson.

Members of the team presenting Neil Simon’s romantic comedy “Barefoot in the Park” have specific attractions to the play, whether it’s a love of theater, appreciation for this particular work, or another reason close to their heart.

What: The Chippewa Valley Theatre Guild presents “Barefoot in the Park,” a romantic comedy by Neil Simon.

Jillian Phillips, who is directing the Chippewa Valley Theatre Guild production that opens Thursday, said her interest stems from memorable experiences with the 1963 play, in which newlyweds Corie and Paul Bratter try to make the relationship work despite their dramatically different personalities.

“I saw this show for the first time on my birthday at Fanny Hill (Dinner Theatre in Eau Claire) ... and I just really fell in love with it,” said Phillips who talked about the play with four cast members before a rehearsal at The Grand Theatre.

Her judgment was reaffirmed when she attended a Menomonie Theater Guild staging of the play that included a friend of hers in the cast. “So I really wanted an opportunity,” she added. “This is my first time directing with the (Chippewa Valley Theatre) Guild, so I was glad to have a show that I know and I love and I’m very comfortable with.”

Phillips elaborated on what she enjoys about the production, which local audiences can see during the eight-performance at The Grand Theatre.

“It’s so loving and hopeful,” she said. “It’s Neil Simon, so you do have a bit of that ‘Odd Couple’ thing with Paul and Corie. But they care so much about each other, even though they’re complete opposites. And Victor (Velasco, the couple’s neighbor in their New York apartment building) is such a fun, zany character, and the mom is just every mom, especially every ’60s mom. It’s really funny, it has a lot of heart, and these guys are so good at it sometimes it just doesn’t feel like work.”

For Gary Hanson, who plays the colorful Victor, the production offered another chance to get onstage. Before moving to the area, he had lived in Clear Lake for about 15 years and acted in numerous productions there, including characters known for generating laughs. The role of Uncle Fester in “The Addams Family” musical is among those he has he enjoyed.

But Hanson hadn’t participated in a play for about two years before seeing the “Barefoot in the Park” audition announcement. So he watched a production on video and tried out, aiming specifically for Victor’s role.

“I’ve always played the goofy characters, or the eccentric in some way or another, in my previous work,” he said. “Victor looked like that one was the one that would kind of fit.”

Jeffrey Peterson, portraying Paul, knew the show because one of his best friends directed the Menomonie Theater Guild show Phillips had seen.

He wanted to audition for this production, but it turned out a work conflict would get in the way. Much to his appreciation, things were worked out.

“(Paul is) an interesting character,” Peterson said. “He’s kind of multilayered. A lot of the other roles I’ve played ... have been more on the fun side, more of the charming type or whatever you might say. Whereas Paul is a little bit more straight-laced.”

In particular, Peterson was drawn to a scene in which Paul gets pulled out of his comfort zone, which he considers “one of my favorite scenes in a performance of any show ever.”

In the role of Corie, Josie Mae Butzler said the last two productions she had performed in were musicals and she wanted to do a straight play, and the charms of “Barefoot in the Park” stood out.

The role of Corie’s mother was especially important to Michele Langhough. The last time she saw “Barefoot in the Park” it was at Fanny Hill and her friend Lois Hodgins played the same part. Lois and her husband, Don Hodgins, led the dinner theater for nearly its entire 35-year run — Lois as actress and group sales director, and Don as artistic director and actor. Lois passed away from cancer in 2018.

“If I could even take a tiny bit of her and be able to do this role,” Langhough said.

She added that she was interested in acting again after taking a break so she could direct instead.

While the show offers abundant laughter, as one would expect from a theatrical legend such as Neil Simon, it offers more substance, the actors said.

Phillips said the genius side of the equation comes with the characters’ depth.

That skill is apparent whether it’s on an individual or a group basis, other actors said.

“He comes in a much different character than when he leaves after the show goes on,” he said. “He’s still got many of the intricacies with him, but with the relationships he has and how he evolves through that is interesting.”

“You’ve got these four wildly different characters in almost every way,” he said. “And the way they all blend together by the end of the show, it’s almost seamless. It just happens.”

“He did start out kind of a comedy writer, and it’s always that next punch,” she said. “And he still brings that to the show too, to where you can feel it’s all of a sudden right there, and then there’s another punch, there’s a punch at each other like two comedians, who’s going to get the better of the other one, and you can feel that even in this show.”

Peterson acknowledged that Simon raises the stakes on the challenge of learning a role.

“Anytime you perform, you’re balancing and juggling a billion different things in your head to try and do the production justice,” he said.

With Simon, he continued, sarcasm gives power to the punches the lines deliver.

“He’s very sarcastic,” Peterson added. “His humor is very on the nose. ... So understanding those moments and how to emphasize the punch lines is something you kind of always have to be aware of when you’re going through the script.”

Phillips and the cast have paid particular attention to how the dialogue should be delivered, Butzler noted.

“That’s something that Jillian has had us be really cognizant of is remembering our beats and our comedic timing because that’s something that is once again so punchy, that flows so well, it’s easy to forget that,” she said. “And just for maximum effect you really need to study and really be aware of where that natural flow comes from.”

With this fictional story’s detailed exploration of real-life love and relationships, it seems the Theatre Guild has chosen an appropriate time of the year to stage it.

“I’m so glad we’re doing it around Valentine’s Day because I think it will remind couples that while we do have our times and our moments, we do really love each other,” Phillips said. “And, oh, I need to call my mom when I get home.”

A specific scene that helped prompt Phillips’ comment about true love comes near the end of the show and involves advice Corie receives from her mother. To get word-for-word accuracy she turned to Butzler, who responded: “You have to give up a little bit of you for him.”

To which Phillips responded: “They bring out the best in each other.”

Seeing an opening for a bit of humor, Hanson added: “And sometimes the worst,” which did in fact stir laughter from the group.

Finally, illustrating through conversation how Simon can deliver humor along with the deepest emotions, Phillips reaffirmed her earlier statement.

“But that’s the thing,” she said. “It’s all going to come out, but as long as love is the strongest emotion that you have for each other, you know you can get through anything.”