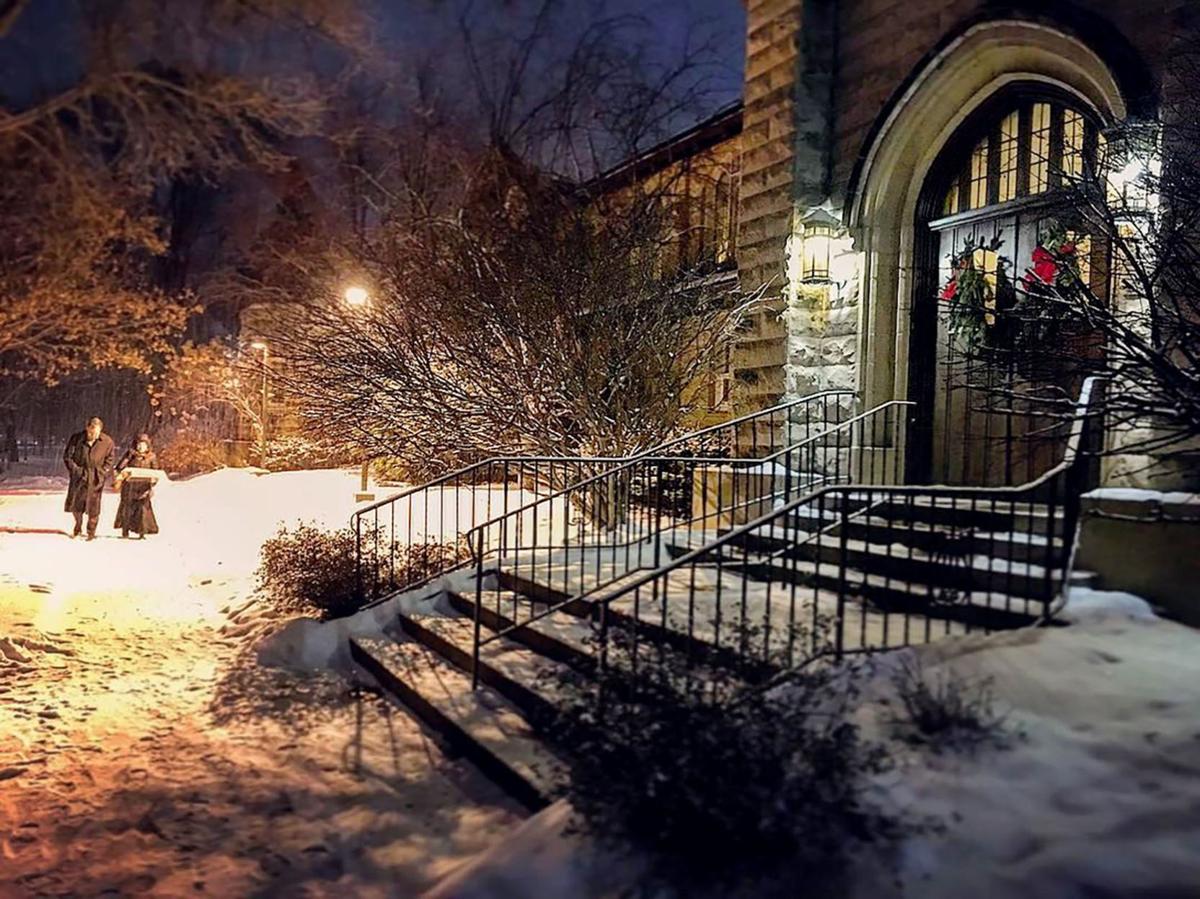 Two members of the Master Singers walk outside First Congregational United Church of Christ in Eau Claire. Four recorded concerts by the Eau Claire choir will air the next four Sundays on Wisconsin Public Radio’s News and Music Network. 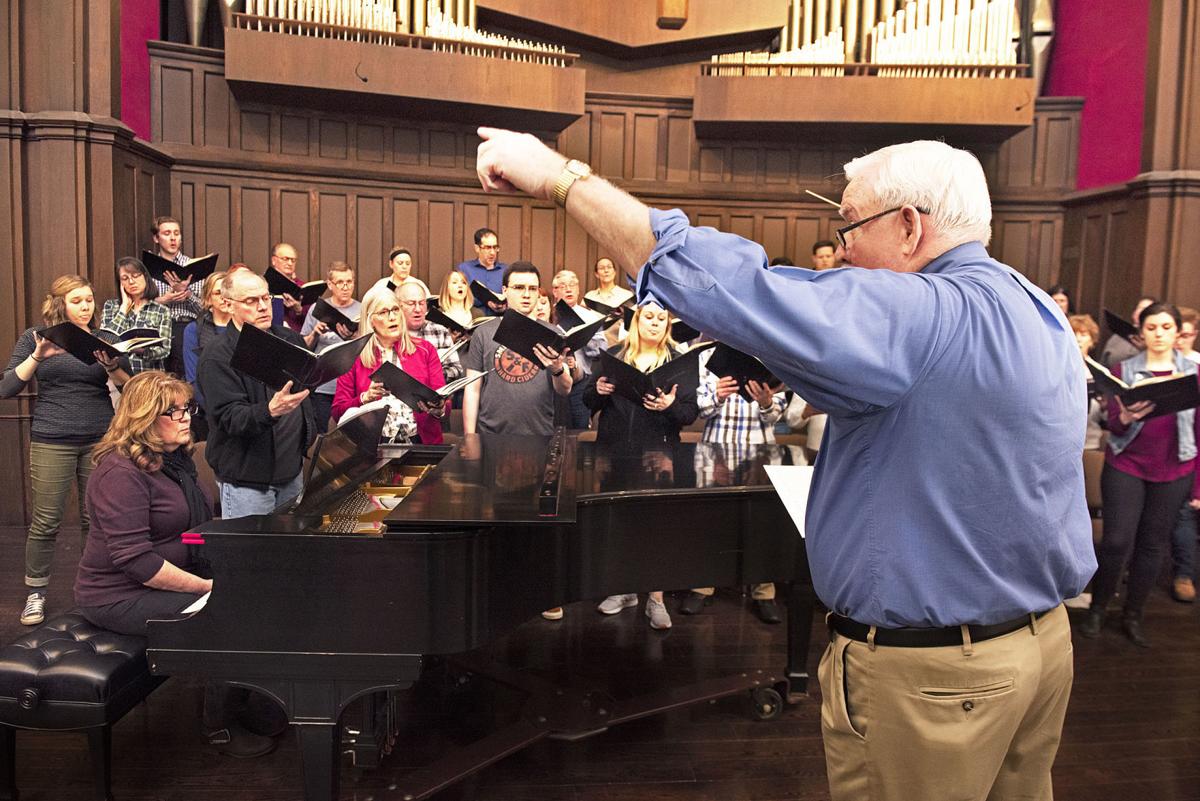 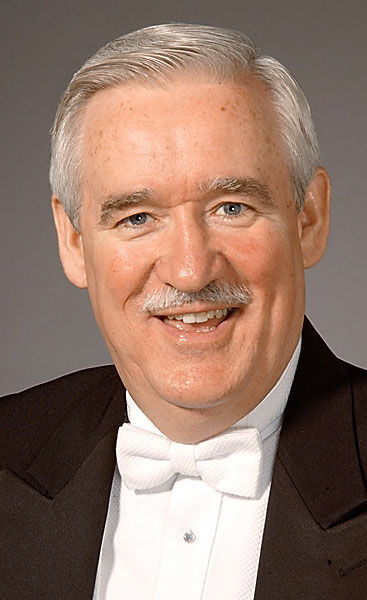 Two members of the Master Singers walk outside First Congregational United Church of Christ in Eau Claire. Four recorded concerts by the Eau Claire choir will air the next four Sundays on Wisconsin Public Radio’s News and Music Network.

EAU CLAIRE — While the Master Singers had to cancel their 28th concert season, choral music lovers have multiple opportunities to enjoy past performances.

Four of the choir’s previous concerts can be heard statewide at 1 p.m. the next four Sunday afternoons on Wisconsin Public Radio. In addition, listeners can enjoy their music on CDs and recordings posted on the group’s Facebook page and YouTube channel.

All of the broadcasts are airing on the “Wisconsin Classical” program, hosted by Lori Skelton. The first concert is titled “America, My Home 2016: Hairston and Hogan,” featuring influential composers Jester Hairston and Moses Hogan, who are remembered for African American spirituals and other Black choral music.

The other three performances feature the choir’s annual Christmastime concerts from the past three years.

“We’re honored by this,” said Gary Schwartzhoff, artistic director and founding conductor of the Master Singers. “We all know across the state of Wisconsin there would be a whole lot of possible artistic organizations that could do this as well as us, including a host from Eau Claire.”

Skelton shared her appreciation of the Master Singers in emailed comments and a follow-up phone conversation. As she said during the call, when she listens to the choir, “I always expect to hear, in addition to very fine singing … really, really great choices in repertoire.”

Skelton, a longtime member of the Milwaukee Symphony Chorus, noted Schwartzhoff’s attention to contemporary American composers. “I’m just incredibly impressed with how devoted they are to furthering the choral repertoire,” she said.

In past years, Skelton has aired the recording of the previous year’s “Lessons and Carols” concert the Sunday before the Master Singers’ live performance, she wrote. When she and Schwartzhoff spoke in June, it was clear there would be no live “Lessons and Carols” performance this year, so they made plans to air the 2019 concert early next month.

Skelton also arranged to have Schwartzhoff to send her a “best of” list from previous “Lessons and Carols” to be aired in December of next year – a selection process sure to be difficult because of the choir’s wealth of strong performances.

In October, when WPR began planning for holiday programming in December, Skelton remembered the Master Singers’ Hairston/Hogan program, which she had featured in 2017.

“Those rousing spirituals would be the perfect thing to remind us of strong ties to tradition, when more and more of us are looking at a subdued, definitely-not-traditional, holiday season,” she wrote. “Four Sundays between Thanksgiving and Christmas ... why not four Sundays of the ECMS?!!!”

For the “Lessons and Carols” programs, Schwartzhoff looks for international flair.

“They’re all carols of the holiday season, but carols from around the world instead of focusing on American carols,” he said. “There are a lot of other nationalities featured in the program, which we cite.”

There also is a commissioned work for each year’s concert.

About 15 songs are performed, including one hymn or carol the audience sings while the choir goes offstage for a quick drink of water.

At one time, the program featured about 15 lessons, but that has been changed to one lesson before each block of five carols “to be respectful of time,” Schwartzhoff said.

Before airing a performance on her programs, Skelton, who also hosts “Afternoon Classics” on WPR, familiarizes herself with the piece.

In looking at the 2019 program, set to air Dec. 6, Skelton recognized some pieces.

“There was one collaboration that was new to me,” she said. “A Norwegian composer (Kim Arnesen) who collaborates very often with a Welsh poet, and the piece is ‘His Light in Us.’” St. Olaf Choir commissioned the work in 2016.

“But then Gary is also including a 1953 motet, so there’s this incredible range of what these musicians are bringing,” Skelton continued. “And that to me is always a delight. Every time I get a CD from this group, I open it, and it is like opening a treasure chest — what am I going to find?”

In its 27 seasons, the Master Singers have produced at least 40 recordings, Schwartzhoff estimated, not counting the ones made for archival purposes.

“For a group of our nature to have a discography of that size … that’s a lot of music,” he said.

Some of those performances can be heard, along with a still photograph of the choir, on the Master Singers’ Facebook page and YouTube channel.

Four to six pieces are posted each month. With Christmas season unofficially starting in earnest, a couple of songs a week will go up, probably lasting through January, Schwartzhoff said.

Schwartzhoff stressed the importance of these outreach efforts in reminding people of the group’s talent. “I guess in part that’s why we’re doing it, to indicate to people that this ensemble exists,” he said.

The fall concert and “Lessons and Carols” were canceled earlier this year. This week the decision was made to forgo the spring concert as well. The main reason focuses on health and safety related to rehearsals and concerts.

“There are a few people that probably would go with it, but the majority of the ensemble, given their ages of 40 and above, and some 60 and above, are not going to risk their health, nor should they, to come for the purpose of ongoing rehearsals leading up to a public concert, he said.

To see if the virtual arrangement would work from a technical perspective, they did a “test case” with the Gustav Holst hymn “In the Bleak Midwinter.” That persuaded Schwartzhoff to proceed.

While the approach presents technological challenges, Schwartzhoff noted the importance of social interaction in the making of music.

To assist the choir, Schwartzhoff encourages supporters to take the following steps:

• Make a donation, which Schwartzhoff said has been done generously, especially from the corporate benefactors.

• Buy a CD and share comments about those recordings on social media. Some DVDs also are available.

Giving a statewide audience a chance to hear talented musicians in their own region provides multiple benefits, Skelton pointed out. One is introducing listeners to group.

“That is the hope,” she said. “The other side of that is just as important for those in a community who know an ensemble and already have a great deal of pride in what this particular group of artists has accomplished — to then turn around and be able to share that with others.”

In that mission, Skelton also has featured west-central Wisconsin’s Chippewa Valley Symphony Orchestra, the Eau Claire Chamber Orchestra and the Red Cedar Symphony among the 20-some orchestras on “Wisconsin Classical.”

Furthermore, the broadcasts are streamed so they can reach an even wider audience.

“What if you are a member of the Eau Claire Master Singers, but you’ve got family in Pennsylvania or you’ve got family in Britain?” Skelton said, adding that the opportunity enables them to say: “‘Guess what, Aunt Cathy? My group is going to be on the radio and on the computer. Finally you’ll be able to hear me sing.’”

Skelton also looks to the future of musical organizations she features: “When they’re ready to do a live concert again, maybe you’ll want to go check it out.”

The following past concerts by the Master Singers will be featured on Wisconsin Public Radio’s “Wisconsin Classical” program, hosted by Lori Skelton. The program is part of NPR’s News and Music Network, which includes the stations WUEC (89.7 FM) in Eau Claire and WVSS (90.7 FM) in Menomonie.

Those programs, and many others, also can be heard on CD. To buy those recordings and for more recorded pieces by the Master Singers, go to themastersingers.net. For more about the choir, go to the website,  facebook.com/TheMasterSingersEauClaireWisconsin, or the choir’s YouTube channel: tinyurl.com/y2awoeeo.

For more about Wisconsin Public Radio, including hearing the performances via livestream, go to wpr.org.

All four of the Master Singers concerts airing on Wisconsin Public Radio will no doubt rekindle happy memories for audiences and choir members.

That’s especially true of this weekend’s broadcast for Gary Schwartzhoff, artistic director and founding conductor of the Master Singers.

“America, My Home 2016: Hairston and Hogan” presents the music of celebrated Black composers Jester Hairston and Moses Hogan, and Schwartzhoff got to work with both men.

Schwartzhoff took part in a workshop setting once or twice with Hairston, who died in 2000. In 2002, Hogan, who was inspired by Hairston, spent a few days on the UW-Eau Claire campus, where Schwartzhoff was director of choral activities from 1991 to 2016.

Schwartzhoff brought Hogan to campus for a few days in April 2002 that culminated in a public concert as part of the university’s Artists Series. The performance included UW-Eau Claire’s Concert Choir and Singing Statesmen, both directed by Schwartzhoff, and Women’s Concert Chorale, directed by Alan Rieck. Also taking the stage was a faculty voice quartet.

The day of the concert, high school choirs were invited to visit campus and work with Hogan at a clinic; some of those students stayed for the concert.

During Hogan’s stay, Schwartzhoff asked if they could record the Artists Series concert but was told that Hogan’s record company restrictions wouldn’t permit it.

“I said, ‘Moses, this is too big an event to let it go,’” Schwartzhoff recalled. “‘What if we did it for archival purposes?’”

Hogan relented “‘as long as you promise you won’t release it.’”

That turned out to be a fortuitous decision. Less than a year later, “(Hogan) was gone, and oh my goodness we have these treasures,” Schwartzhoff said.

In fact, Hogan’s parents asked for a copy of that concert. About five or six years after receiving it, they contacted Schwartzhoff again requesting another copy — the first one had been worn out from repeated listens.