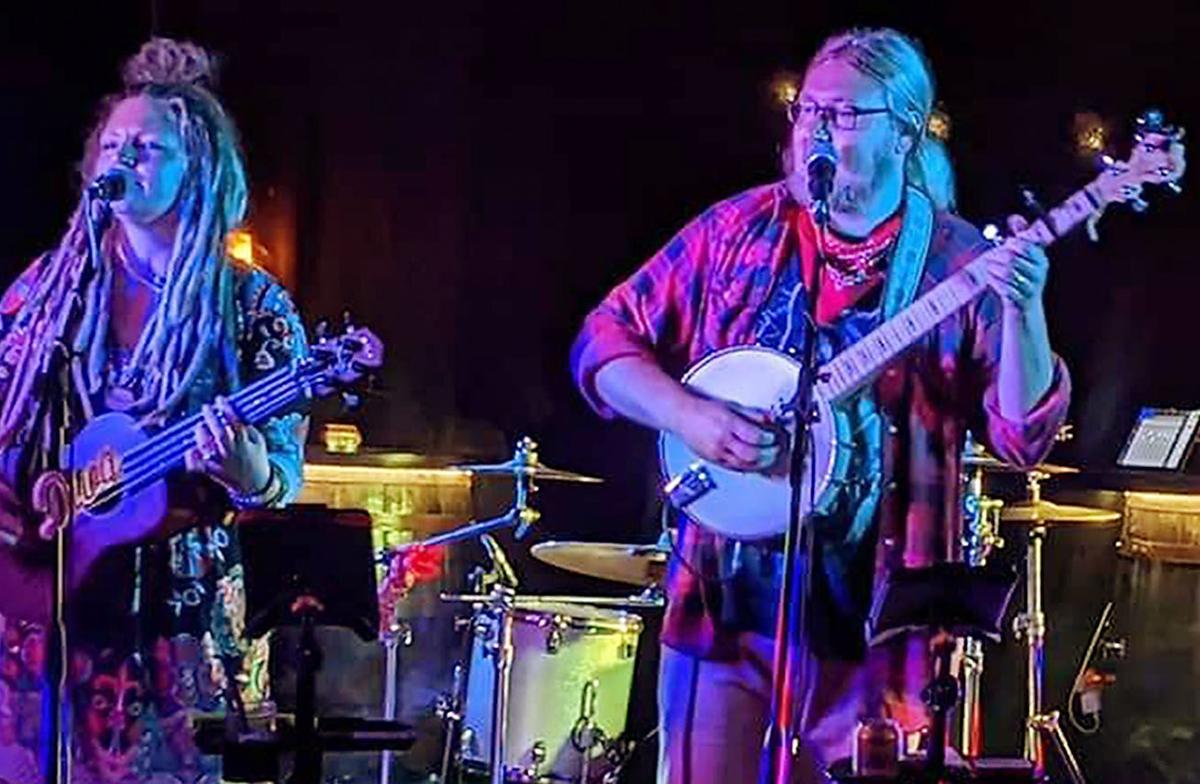 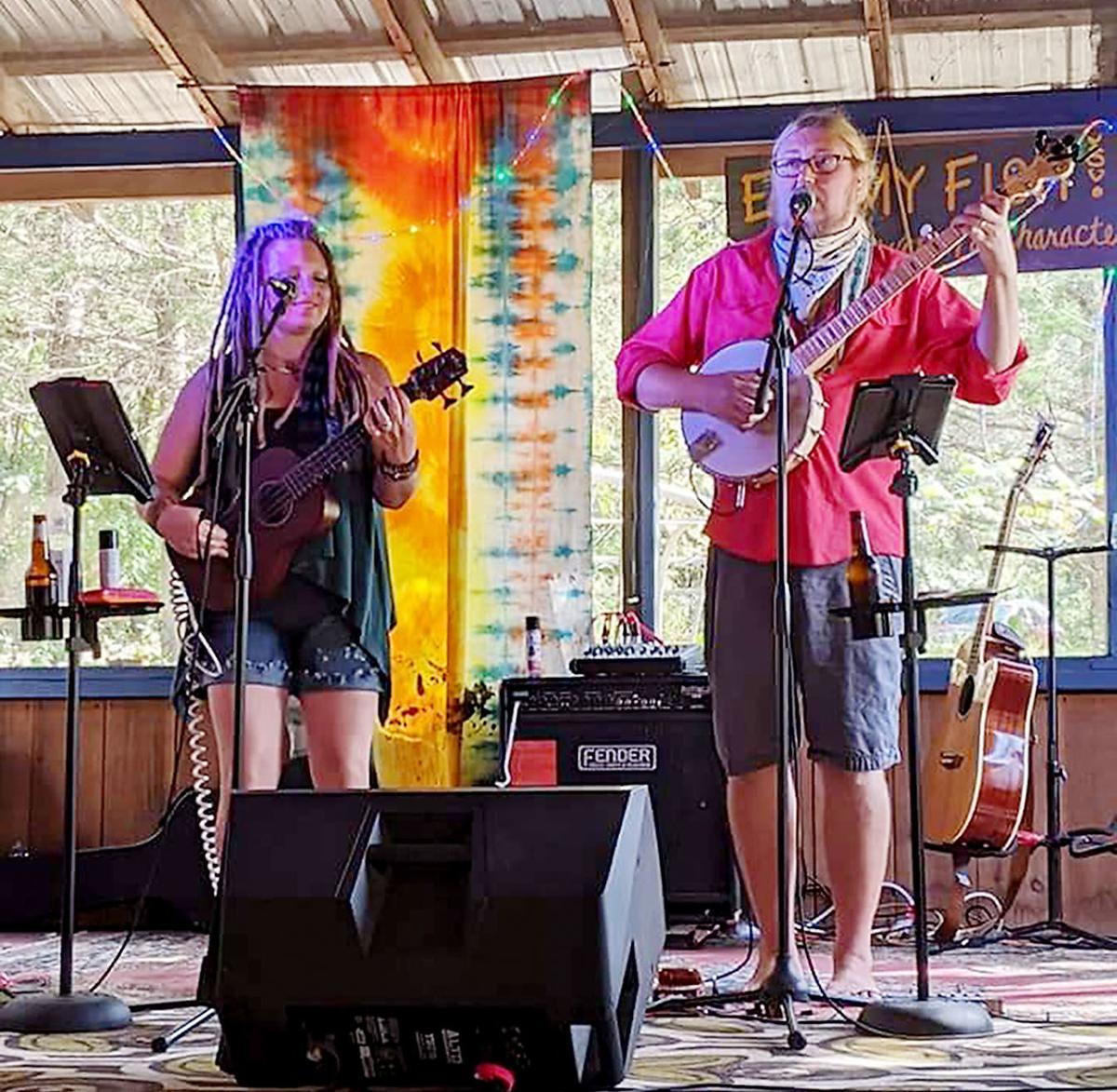 The Rock Creek Song Dogs are starting to work on their fourth album after a busy schedule of outdoor performances this summer. 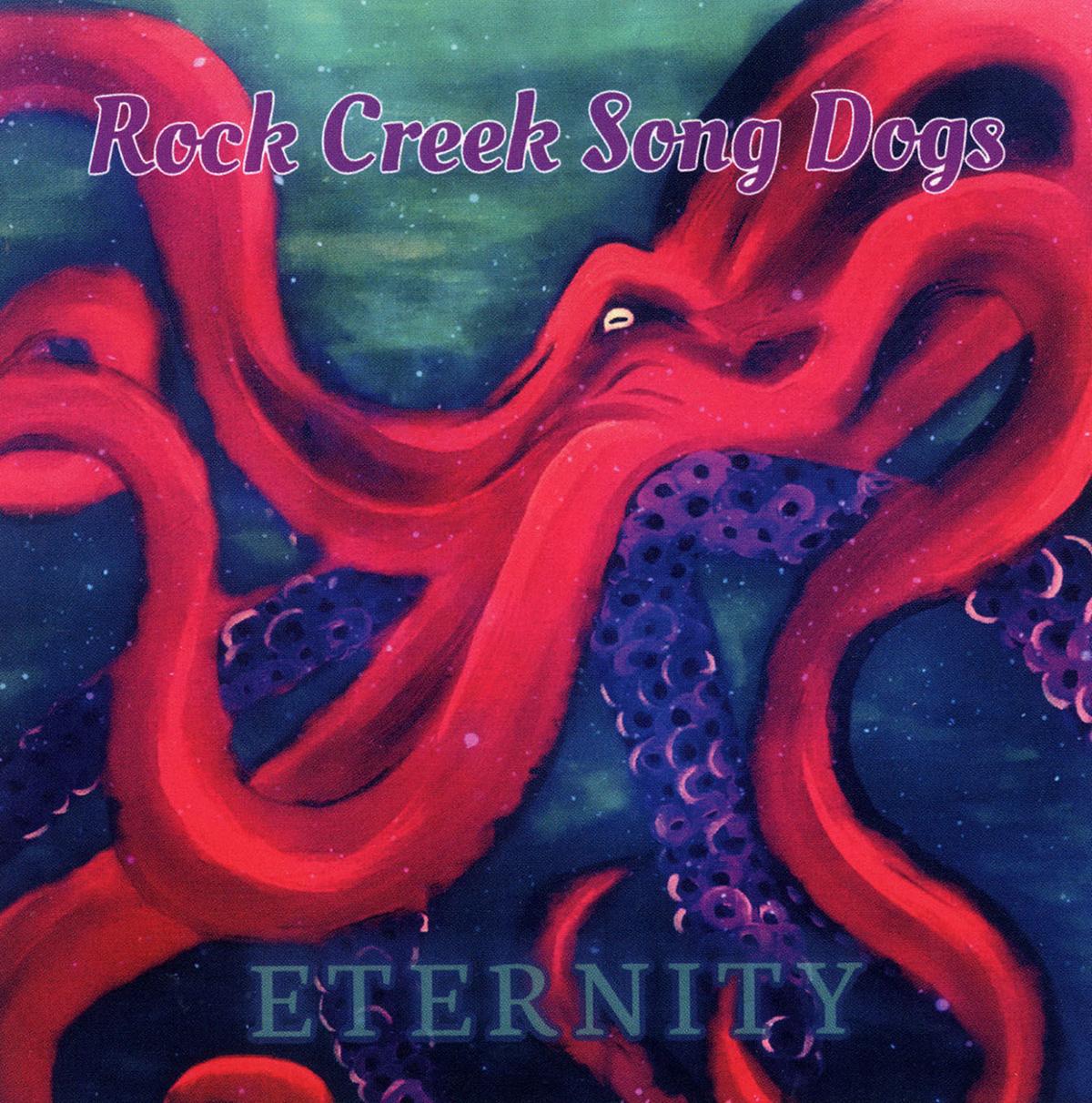 All of the Rock Creek Song Dogs’ three albums, including this year’s “Eternity,” were recorded in their home studio.

The Rock Creek Song Dogs are starting to work on their fourth album after a busy schedule of outdoor performances this summer.

All of the Rock Creek Song Dogs’ three albums, including this year’s “Eternity,” were recorded in their home studio.

It might seem incongruous to make music that’s driving and upbeat but with sinister overtones — especially because Jake and Dani Jo Soha are known as people “who love to joke around and stuff like that,” said Jake, who sings and plays guitar, banjo and mandolin.

In a recent phone interview, the Sohas good-naturedly explained how those heavier themes emerge, among other subjects.

“Some things are easier to sing than they are to say,” said Dani Jo, who sings and plays bass, Ubass and harmonica.

“Absolutely,” Jake added. “I’d agree with that, where you wouldn’t necessarily want to sit down with your friends and family and talk about your struggles or personal demons and issues like that. It seems to be a lot easier if you just record it and let everybody hear it.”

“I’m not going to compare myself to Nirvana or anything like that,” Jake said. “But you think about a band like that and how they’re able to sing very dark things over some very powerful, higher energy chord progressions, I guess what you’d call them.”

The Sohas helped illustrate their creative process through a couple of songs on “Eternity.”

“The Flood,” for instance, makes a real-world connection through ominous opening lyrics: “When the floodwaters rise, and the snakes pour out.”

“The main line came very literally for us,” Jake said. The Sohas bought their home near the Buffalo River in Mondovi two years ago, and the weather at the time proved to be less than welcoming.

“That first spring, I don’t know if you remember but it was after the winter of hell, of record snow levels,” he said. “And then when that spring came, it flooded so bad. Everywhere kind of stayed flooded down along the river that whole time, and every time it rained the river would swell and snakes would come pouring out.”

But as they’ve performed the song, the meaning has broadened beyond that memorable experience.

Another set of words that grabs the listener around the collar can be found in “To the Void,” in which Jake sings: “Call me paranoid, call me to the void.”

The phrase just came to him, “and I kind of built the whole rest of the song around that,” he said.

Jake and Dani Jo explained the meaning, a response that speaks to how their collaboration works:

Jake: “A song about being pulled in different directions.”

Jake: “More kind of accepting what is.”

Dani Jo: “Accepting what is and what your fate might be.”

That effort has been productive, as “Eternity” is the Rock Creek Song Dogs’ third album in three years, including “Dead Man Pickin’” last year and “Perseverance and Gin” in 2018. All were recorded in their home studio.

Of their prolific output, “It kind of comes in spurts,” Jake said, with Dani Jo adding that discipline plays a role.

“We really carved out the time for us to sit down and be reflective,” she said, explaining that they do their music full time.

Jake elaborated: “Nine out of 10 times I will come up with a chord progression that we like with our main theme of the song and then just kind of start singing out a melody of nonsense words and just will get one line or two lines out of some gibberish and then kind of take off from there. That’s essentially how almost every song has been written.”

The music they write and perform reflects ensembles they admire, such as The Devil Makes Three of New England and, from Saskatchewan, The Dead South, two groups whose sound draws from punk and more traditional bluegrass or string-band music.

“I will listen to everything, but a lot of the bands we enjoy listening to kind of have that same feel to them,” Jake said.

“I spotted Jake in choir class — that was the first day of school when we were freshmen,” Dani Jo said. “Then later the same day we met and introduced each other in art so class. So choir class and art class were shared things throughout high school.”

“My guitar playing was pretty ... she’s using that term loosely for when I was 15,” he said, as they both laughed. “I think I knew four chords. But damn, I felt like I knew everything then.”

Dani Jo played saxophone in band, and Jake did in fact introduce her to the guitar.

“He would kind of give me lessons now and again, and my parents bought me a guitar so he could teach me, and then this friendship just kind of grew,” she said.

She spoke modestly about her abilities on guitar, but added: “I used what Jake taught me about the guitar to transfer it to the bass later when he started playing banjo and mandolin and performing out.”

Jake, with his forceful, rough-edged voice, handles most of the lead singing, and Dani Jo contributes warm harmony vocals, and she sings lead on songs such as “Ether” on the new album.

The Sohas enjoy a wide spectrum of musical styles, but for their own music they work in an Americana sweet spot.

“It’s a beautiful genre of music because folk music, bluegrass music … you can always put in your own little touch on things, your own personal taste into it,” Jake said. “And if you want your bluegrass to sound a little more rock ‘n’ roll, well, you can definitely do that. If you want it to sound even basey or almost hip-hoppy, you can do that too. That’s kind of what folk music’s all about, Americana’s all about.”

They host an open mic at Farm to Folk outside of Mondovi from May through September. They also lead open mic at Northwoods Brew Pub in Osseo, but that has been put on hold because, as Jake put it, “COVID has been putting a damper on everything else.”

So their date tonight at Infinity Beverages in Eau Claire, and another performance at the same venue Friday, Nov. 13, will be among the rare opportunities to catch them live for the time being as the weather turns colder. They were grateful to play at many outdoor venues this summer, Jake added.

But that hasn’t stopped their music making, as they start work on the next album by writing songs and with Jake continuing to hone his production craft in their studio.

“We call this time of year recording season,” Jake said.

The couple also reflect on the joy they take in what they do.

“We don’t want to be totally cliché here, but we really feel genuinely blessed to be able to do this, and we count ourselves as being fortunate to be creating music and having the time and ability to create, record and share our music with, I guess, the world,” Jake said. “We’re super grateful to everyone who’s ever come to a show or bought a CD or listened to a song.”

Those comments suggest that, while their music may have touches of darkness, their outlook focuses on the bright side.

• The albums also are available on all download and streaming services, and people can check out their music on their YouTube Channel (tinyurl.com/y2fqqx3x).

For more information, go to rockcreeksongdogs.com or their Facebook page.