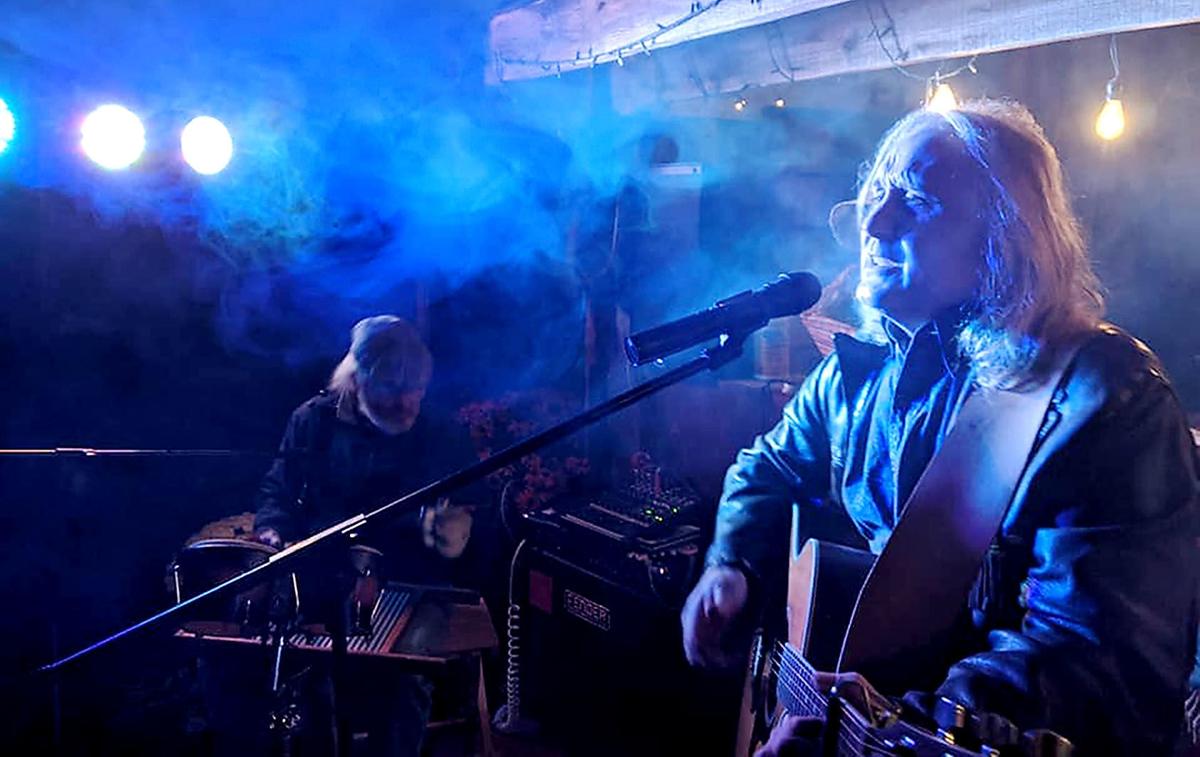 Top: Todd Adams performs with Ben Johnson at Farm to Fork Retreat at Dancing Yarrow in Mondovi. The singer-guitarist has released his first album, “The Todd Adams Experience,” including original compositions he’s performed at Farm to Fork and other local venues such as Together Farms in Mondovi and Northwoods Brewpub in Osseo. 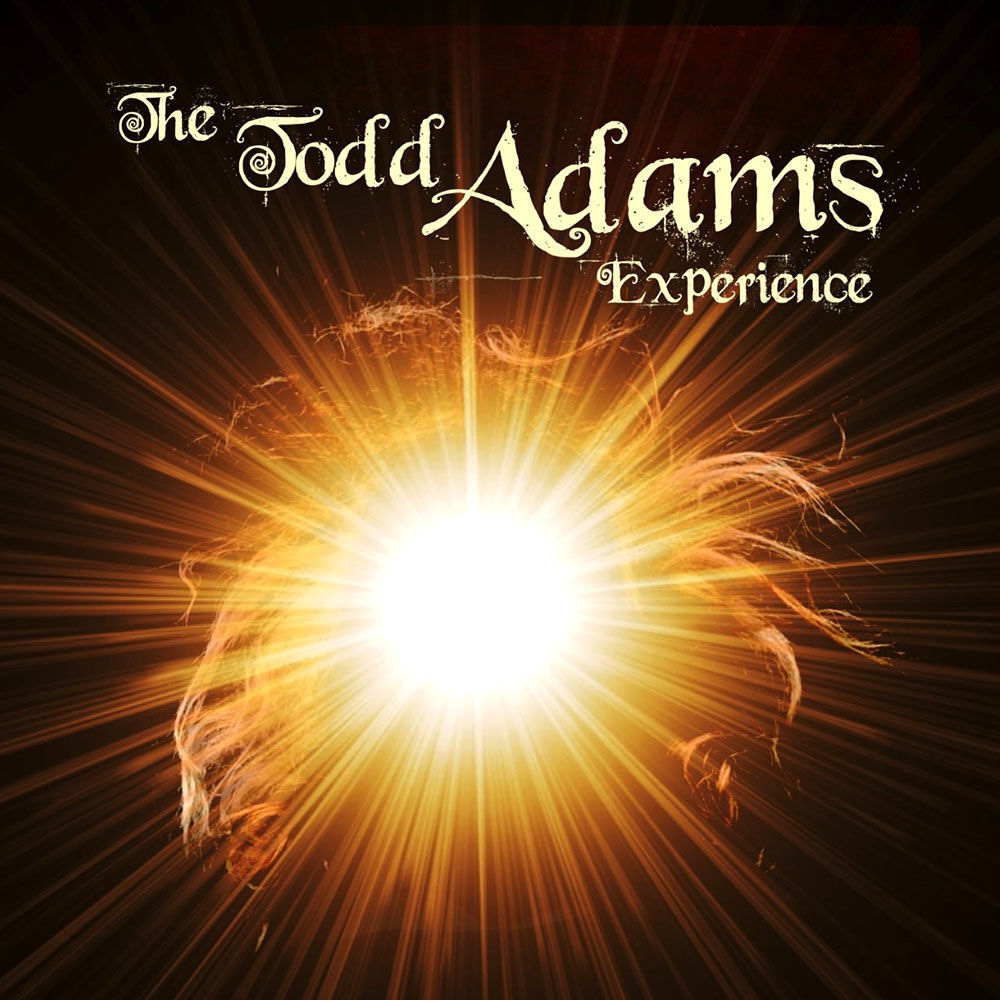 “The Todd Adams Experience” features eight songs: seven originals by Adams and another he adapted with the words of Shakespeare.

Top: Todd Adams performs with Ben Johnson at Farm to Fork Retreat at Dancing Yarrow in Mondovi. The singer-guitarist has released his first album, “The Todd Adams Experience,” including original compositions he’s performed at Farm to Fork and other local venues such as Together Farms in Mondovi and Northwoods Brewpub in Osseo.

“The Todd Adams Experience” features eight songs: seven originals by Adams and another he adapted with the words of Shakespeare.

“It’s just something that I started doing more as a way to try to record my things just to have a copy of them,” Adams said in a phone interview. “From there it expanded to the point where it got to be, well, I think I can come up with enough to actually put together an album’s worth of material. So we just kept working on that, focused on that.”

“I really feel like Todd’s music and his songs are 100% genuine,” said Soha, who, with his wife Dani Jo, makes music in the folk-bluegrass duo the Rock Creek Song Dogs. “They are from the heart. He’s not looking to write some pop hit or earworm. He’s singing a genuine song from within. Each song has its own kind of emotionally driven story behind it — very organic songwriting formula.”

“The Todd Adams Experience” consists of eight Adams compositions on which he sings and plays guitar.

The emotionally driven stories, to use Soha’s phrase, include the opening “As the Rain Pours Down,” featuring a bit of political commentary along with expressions of hope; “Just a Dram,” which turned an occasion sampling Scotch whisky in Scotland into something more universal; and “The Earth Mourns,” with a compelling, plaintive refrain.

In total, the lyrical depth and metaphorical power show why Adams was drawn to songwriting.

“It’s great to listen to music and read books and to watch movies and stuff like that, but it’s nice to find a way to express yourself,” Adams said. “Some people paint, and some people sew. Some people do anything for their art. My art comes through trying to express myself musically.”

Adams first picked up the guitar about 25 years ago, taking basic lessons from a friend in Minneapolis.

“I didn’t really have time to follow through with it and spend time with it, so it kind of languished for a while, and then when I moved to Eau Claire I thought I’d have a bit more time to take the guitar out,” he said.

Eventually Adams progressed to the point of playing at open mics, in church groups and for a few years in the bluegrass band formed by local radio station WHYS (96.3 FM).

Venues Adams has played include Lake Altoona County Park (when he played in the WHYS band), Northwoods Brewpub in Osseo, and two in the Mondovi area: Farm to Fork Retreat at Dancing Yarrow and Together Farms.

“Usually just doing open mic, anything from two to two dozen songs, depending on how many people are there,” he said.

While Adams puts his music in the folk category, he enjoys a wide spectrum of sounds.

“I listen to absolutely everything from punk rock to experimental music to vintage country to modern indie music; pretty much everything,” he said. “There’s great artists within all those different genres, but most people never get a chance to hear them because they just hear what the popular things are. But it’s nice to kind of seek out that other stuff that’s going on and really delve into that too.”

When Adams began planning to make an album, he initially thought about bringing in other musicians.

Soha, whose production role included recording, mixing and mastering the project in his Buffalo River Recordings studio, thought the solo format would serve the material well.

“I feel like they’re very good stand-alone songs,” he said.

Most of the songs on the album were written in the last two years, Adams said, many of them in the last year.

The oldest song was one he wrote eight to 10 years ago, even though he didn’t begin to hone until much later. In the album’s liner notes he succinctly described “Just Ask the Lord”: “One of the first songs I wrote that I did not immediately discard. A source of strength that is always present.”

Making for an appealing contrast, the lyrically concise and direct “Just Ask the Lord” follows the album’s one song for which Adams didn’t actually write the words — for “The Quality of Mercy” he adapted lines from William Shakespeare.

The song derives from a section of “The Merchant of Venice,” which Adams discovered in “The Ballad of Buster Scruggs,” the Coen brothers’ 2018 film. Uttered by the character known as the “Wingless Thrush,” the words inspired Adams to find their origin.

“I got where it came from and got some of the other words and kind of the gist of what they were talking about,” he said. “And basically kind of paraphrased it and came up with it pretty quick, that night, I think. William’s got good words to work with, you know?” He chuckled. “And good concepts and stuff too.”

The album closes with a one-two punch of a sort of ominous feeling in the final two tracks: “Just a Vision” and “Day By Day the Night Comes.”

“‘Just a Vision’ I wrote about something I experienced a long, long time ago and it always kind of struck with me,” Adams said. “The change in the pacing or the energy of the songs kind of shows in that too. ‘Just a Vision’ is something that I’ve played with other people, and they really help me to kind of push it along. Doing it on my own, it kind of took me some time to figure out how to work that through by myself, just the one-take kind of thing.”

Of the closer, “Day by Day the Night Comes,” Adams says in the notes: “This song has a lot to do with, or maybe everything to do with, the darkness that comes from within.”

Instrumentally, the song allowed him to present a guitar sound that’s different from some of the other tracks.

“That’s more the fingerpicking kind of style so that gives me a little chance to branch out a bit, sometimes fluctuate a little bit like in some of the pacing and things like that,” he said.

For the sequencing of the tracks, Adams credits Soha, who could rely on his experience making the Rock Creek Song Dogs’ albums: “Perseverance and Gin,” “Dead Man Pickin’” and “Eternity.” (A fourth album by the duo is planned for release in the spring.)

Soha explained his process, starting with why he put “As the Rain Pours Down” at the top.

“To me it’s always nice to have a song right up front that is mor or less attention grabbing, and I feel like that one has a real driving pace to it,” he said.

For the rest of the record, Soha continued, “I think it’s important when you have a collection of songs like that to pace them out where you might have a faster song followed by a slower song, and you kind of augment them step by step.”

“The thing is it’s taking a concept that’s based on maybe a book I read or a movie I saw or something that happened as I was just going through day to day life and then just finding something unique in that to try to bring forth,” Adams said.

He especially appreciates it when the listeners engage in what he has written.

“You hope that somebody will actually pay attention to it and look at it carefully, try to really understand what’s going on,” he said. “A lot of times with music it’s just played in the background and people don’t really pay attention to what’s going on. I would hope that people would take the time to listen to the words and kind of think about what they’re saying.”

Adams’ liner notes hint at future projects with the line “Other things might be forthcoming …” He’s more specific when asked if the record-making experience encourages him to produce a follow-up.

“I think it does, “he said. In fact he’s already written four or five new songs since wrapping up “The Todd Adams Experience.”

One difference with the next album might be to ask other players to join him.

“Try not to overdo it and make it real overbearing, but I’ve played with some really great musicians around town,” he said. “It would be nice to let them because I can’t play leads. … Some people are extremely gifted at that. And if they can add that in a part where I would just strum through a break or something, it would just add a whole new dimension to it.”

In his modest manner, Adams summed up his evaluation of the new album: “I’m definitely not the best guitar player, but I do like some of the songs,” he said. “That’s what I’m really trying to focus on, writing songs in a way that’s not trite or predictable, or whatever. Just something that will have some sort of flow to it, some sort of merit.”

Soha’s description would also would seem to fit: 100% genuine songs from the heart.

“The Todd Adams Experience,” the new album by Eau Claire songwriter-musician Todd Adams, can be bought at the following Eau Claire locations:

The album also is available by sending an email to ToddAdamsMusic@yahoo.com.

“The Todd Adams Experience” can be heard on streaming services such as Spotify and Apple Music.