Fans enjoy the 2019 Northwoods Blues Festival at Chippewa Riverfront park in Chippewa Falls. The festival will return to the scenic location Friday and Saturday, with headliners such as Curtis Salgado and Southern Hospitality. 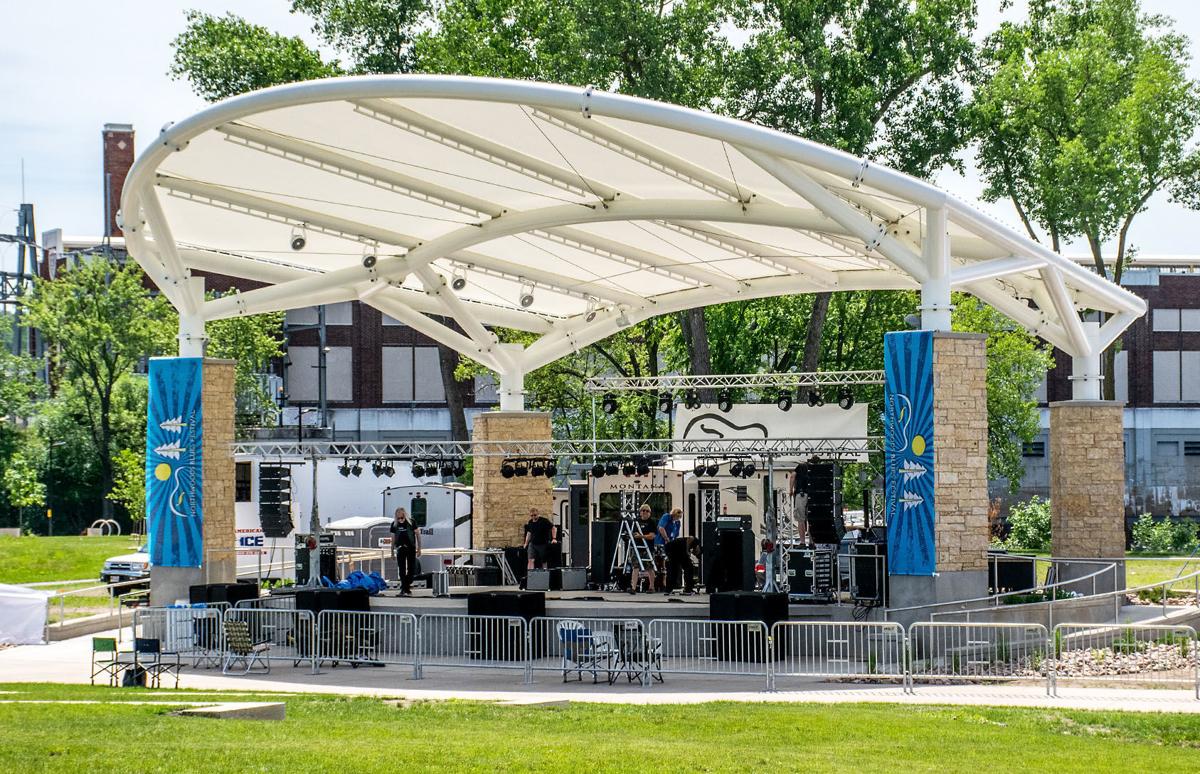 The stage for the Northwoods Blues Festival, seen in 2019, affords a scenic view of the Chippewa River where it’s set up at Chippewa Riverfront park. During the 2019 festival, Xcel Energy lit up the nearby dam in blue.

Fans enjoy the 2019 Northwoods Blues Festival at Chippewa Riverfront park in Chippewa Falls. The festival will return to the scenic location Friday and Saturday, with headliners such as Curtis Salgado and Southern Hospitality.

The stage for the Northwoods Blues Festival, seen in 2019, affords a scenic view of the Chippewa River where it’s set up at Chippewa Riverfront park. During the 2019 festival, Xcel Energy lit up the nearby dam in blue.

CHIPPEWA FALLS — For all the preparation that goes into the Northwoods Blues Festival, Steve Rheaume acknowledged another key but less predictable factor: luck.

Rheaume, CEO of the two-day festival hitting the stage Friday and Saturday at Chippewa Riverfront park in Chippewa Falls, said he knew that, when organizers were finalizing a date, June might be a little early to hold the event because of COVID-19. Still, with the pandemic situation better but still concerning, they decided “pretty much in March that this was a go.”

“Now it seems like it’s absolutely perfect,” he said in a phone interview, laughing. “It’s like my golf game. I play good and I’m lucky sometimes, and I’m much better when I’m lucky. That’s what this is about. I think the stars just simply aligned on this thing. People wanted to get out and see live music. It’s going be a fun event.”

In one of the ways Rheaume was lucky, the entire main-stage lineup booked for the canceled 2020 festival will make it to this year’s event. That includes headliners including Curtis Salgado and Cash Box Kings on Friday and, on Saturday, “supergroup” Southern Hospitality and Toronzo Cannon.

“I went to every artist and basically said, ‘We would be honored if you would want to roll over to the next year,” he said. All the main stage acts agreed, although one replacement was needed on the side stage.

Social media responses confirm the lineup’s strength. “We really are getting great comments,” he said, with repeated “best lineup in the Midwest” reactions.

“People are so excited to be able to get out and see live events,” he said. “It’s been 15 months. It’s just a great coming out party, if you will.”

Count Howard “Guitar” Luedtke among the performers eager to take the stage. Luedtke and his band, Blue Max, will be leading off the festival at 3:30 p.m. Friday, a spot they’ve held for every Northwoods Blues Festival.

“I enjoy doing it; I enjoy kicking it off,” Luedtke said in a Friday phone chat.

“It feels good to do it again,” Luedtke said. “It’s sort of like riding a bicycle. You jump back on and ride it, just like you never stopped. It’s very enjoyable to play after all that time.”

Luedtke appreciates playing the festival, in part for the opportunity to mingle with the crowd.

“I’ve met a lot of people there that I haven’t seen for a while; people come up and introduce themselves,” he said. “Jake Leinenkugel came up. … bar owners from the area I hadn’t met before. There’s a lot of people in and out of there. And people from far and wide. I’ve seen old friends from the Wausau area, as far north as Superior. We have a bunch of friends from La Crosse.”

For his part, Rheaume said, “We just love Howard, of course.”

True to Rheaume’s observation, Luedtke added that audiences seem to be reveling in the opportunity to attend a concert in person.

“They seem like they’re eager to hear live music again, and they’ve missed it for a while,” he said, adding wryly, “They’re glad to get back to what we used to call abnormal, I guess.”

“Maybe it’s not over yet, but it looks like as far as everybody’s concerned, it is,” he said.

The Northwoods Blues Festival will follow all guidelines from the Centers for Disease Control and Prevention, as well as local health department recommendations, Rheaume said. Although masks aren’t required, the festival will have them available at the gate.

Related to health and safety, extra attention will go toward keeping the portable restrooms clean, and the number of hand washing stations will be increased.

For the 2019 Northwoods Blues Festival, organizers moved to Chippewa Riverfront park from the Northern Wisconsin State Fairgrounds, and fans seemed to enjoy the change.

“We had great feedback from people at that location,” Rheaume said. “It’s very special. A lot of people that are blues fans think of Bayfront Park in Duluth on the water,” referring to the Bayfront Blues Festival. “This is right there on the Chippewa River.”

A neighbor to the festival location, Xcel Energy, lit up the nearby dam in blue at the previous festival.

Organizers have taken steps to give the scenic vistas full visibility.

“Everybody hears me beat this mantra all the time of how we’re configuring our tents and everything,” Rheaume said quoting, his own oft-repeated instructions: “‘We do not have anything directly behind the stage between the stage and the river.’ That’s so that people can sit out and see through (the stage area) and see the river.”

Luedtke also has found the location well-suited to music.

“To me it seemed like when they fenced it off and the sun was setting, it was just like the city disappeared and we were just in our own blues world,” he said. “It worked out really good.”

The “blues world” of this year’s festival features heralded veterans of the genre as well as rising stars.

Salgado, for instance, recently won the 2021 Blues Music Award for Best Male Soul Blues Singer. Among the many Blues Music Awards Salgado has earned over the years is the B.B. King Entertainer of the Year honor in 2013. He also has performed with blues great Robert Cray.

“He’s got a real interesting back story,” Rheaume said, explaining how the Eugene, Oregon, native met and befriended actor John Belushi when Belushi was filming “Animal House” in the area.

The musician’s influence on the actor can be seen in “The Blues Brothers” movie, in which famed singer-bandleader Cab Calloway played a character named Curtis who provides a standout moment while performing “Minnie the Moocher.”

“Purely not an accident,” Rheaume said. “They were paying respects to Curtis Salgado.”

Rheaume also commented on other acts at the festival, starting with the rest of the Friday acts.

Cash Box Kings: The band is fronted by Oscar Wilson, “who’s a fantastic singer,” he said. The band also features Joe Nosek, “who’s one of the great harp players,” and guitarist Billy Flynn on guitar.

Ivy Ford: “She can sing any style that she chooses,” Rheaume said. “She’s sung some standards that literally melt your heart, and she’s got a beautiful voice. She’s got a stage presence, great guitar player, just really puts it out there.”

As for Saturday’s stars:

Southern Hospitality: Rheaume calls them the Crosby, Stills & Nash of the blues, “because they really are a super group.”

The members include keyboardist Victor Wainwright, winner of the Pinetop Perkins Award for the best keyboard player three out of the last five years. “Right now his album is No. 13 on the national blues charts,” Rheaume said.

Guitarist J.P. Soars, who also fronts his own band, was nominated for best male blues singer this year. Guitarist Damon Fowler has the No. 3 blues album on the charts.

“They only perform together about three times a year,” Rheaume said. “One of them is the Blues Bedroom in Vegas, and I’ve been out there and that’s fun. And the other is the Blues Cruise; that’s like 5 grand just to get on the boat.”

Southern Hospitality agreed to perform at Northwoods after Rheaume and his brother met them backstage at a performance and persuaded them to make the trip.

“He just retired this past year as a bus driver in Chicago,” Rheaume said. “That was his day job. Now he’s dedicating himself all to the music.”

Ghost Town Blues Band: “They’re known as maybe one of most exciting live bands in the blues business,” Rheaume said.

PK Mayo: The band is led by Paul Mayasich, who is in the Minnesota Music Hall of Fame.

• Inside Straight Blues Band and the Bighorns, 5, 7 and 9 p.m. Friday. Three members of the band are in the Minnesota Music Hall of Fame, Rheaume said.

• Erin McCawley’s Harrison Street Band, 3, 5 and 7 p.m. Saturday. The band represented the state of Minnesota at the International Blues Competition and made it to the semifinal round in Memphis.

Both bands also will be performing at an after-hours party when the festival closes for the night at Every Buddy’s Bar & Grill, 19 W. Central St.

Vendors for the festival include the following:

• Two Gals and a Fryer. Among the fare are deluxe cheese curds.

• Olson’s Ice Cream, which will include the establishment’s new gourmet popcorn.

• Old Southern BBQ Smokehouse. It’s the latest eatery from “Famous Dave” Anderson, and Anderson will be at the festival.

“He’s going to bring what he calls his smoke show,” Rheaume said.

Pleased with his lineup and vendors, and encouraged by the health situation, Rheaume reiterated his satisfaction with how things are looking for the festival.

“We won’t get into politics one way or the other about who takes the credit for what’s happened out here,” he said. “We’re just tickled that people have the opportunity just to get out and enjoy themselves.”

When: Gates open at 2 p.m. Friday and noon Saturday.

Side stage at 5, 7 and 9 p.m.: Inside Straight Blues Band and the Bighorns

Note: On Friday and Saturday nights, Inside Straight and the Bighorns and Harrison Street Band will perform, respectively, during a post-festival party at Every Buddy's Bar & Grill, 19 W. Central St., Chippewa Falls.