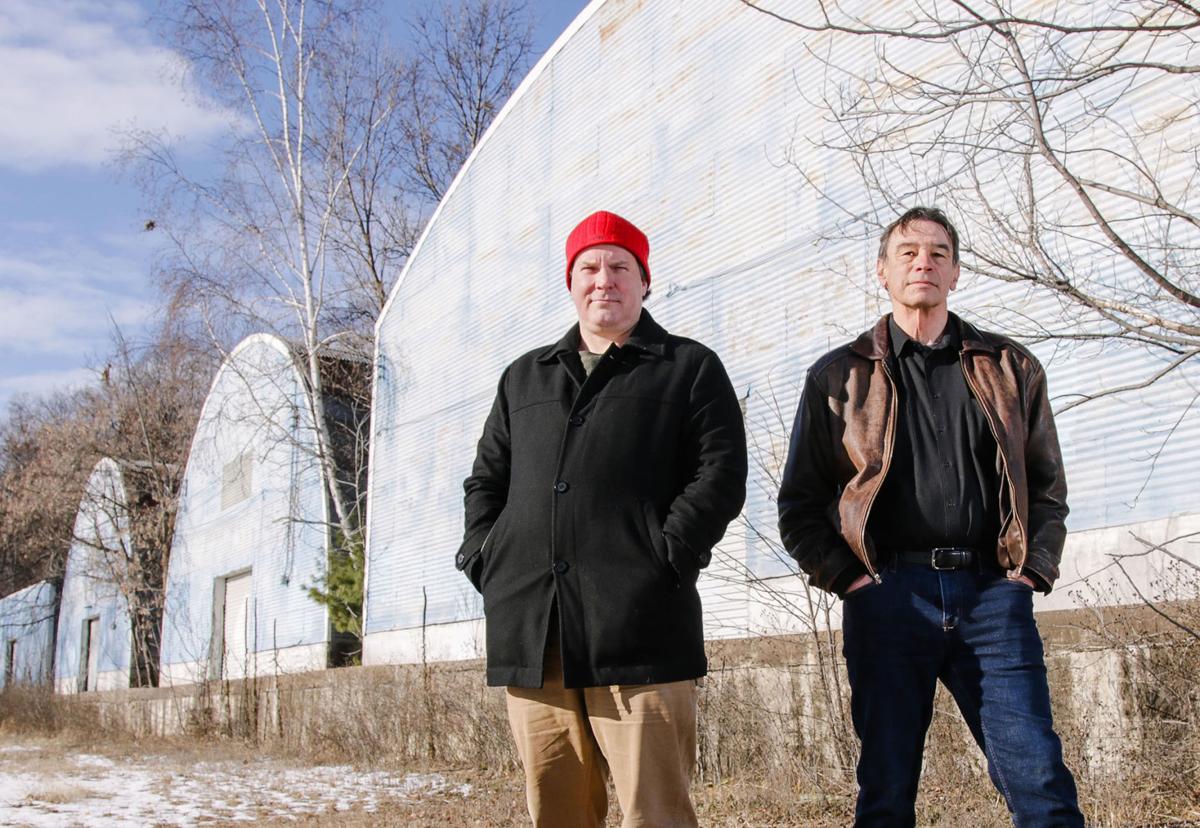 Walter Rhein, left, of Chippewa Falls and Dan Woll of River Falls co-wrote “Paperclip,” a thriller that was a finalist for a 2019 Wishing Shelf Book Award. 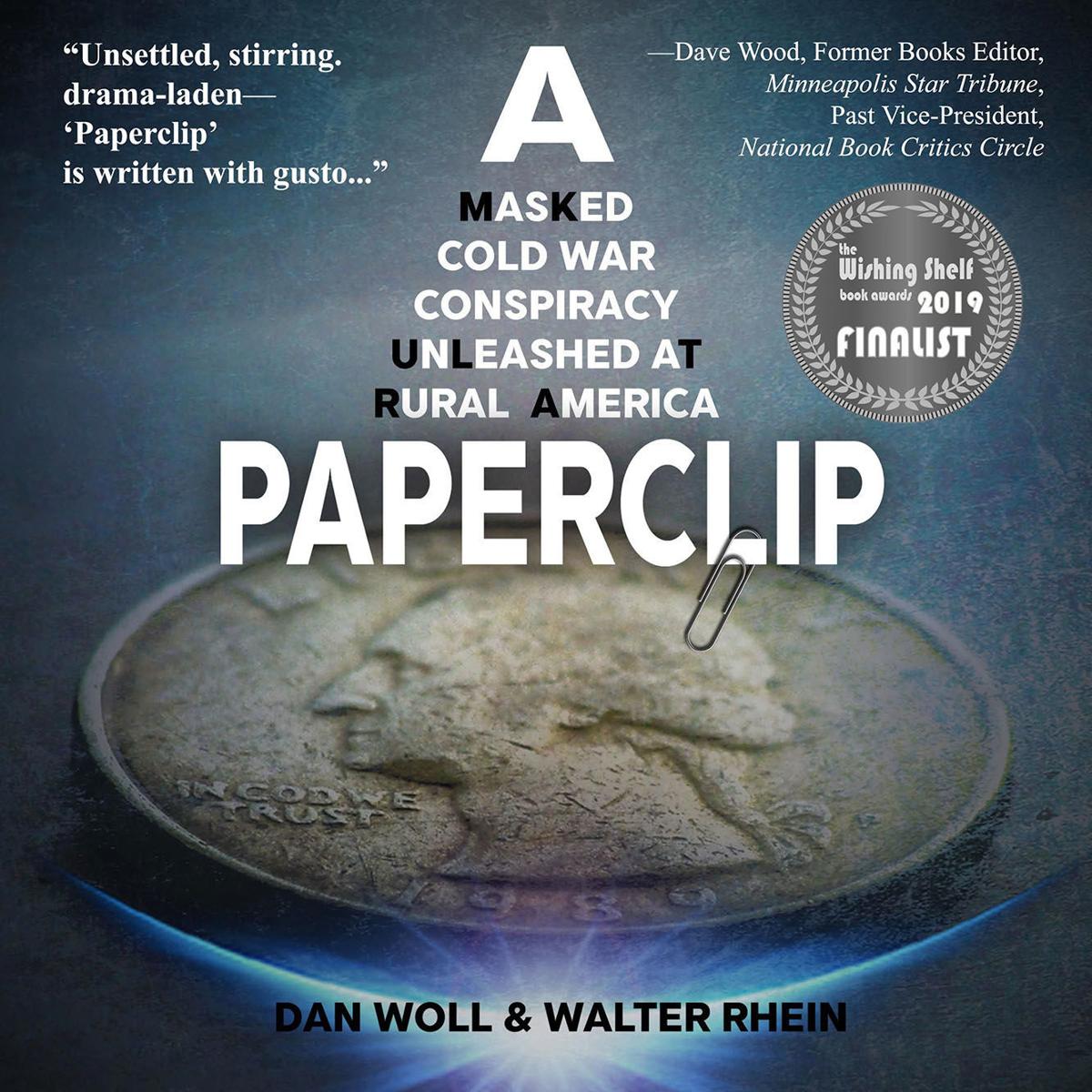 The plot of "Paperclip" is drawn in part from two historical episodes: Operation Paperclip and MKUltra.

Walter Rhein, left, of Chippewa Falls and Dan Woll of River Falls co-wrote “Paperclip,” a thriller that was a finalist for a 2019 Wishing Shelf Book Award.

The plot of "Paperclip" is drawn in part from two historical episodes: Operation Paperclip and MKUltra.

Dan Woll and Walter Rhein became friends through their interest in outdoor sports such as bicycling and skiing. They’ve found writing to be another course, so to speak, where they value each other’s company.

Woll and Rhein collaborated on the fast-paced thriller “Paperclip” (2018, Burning Bulb Publishing). The novel was a finalist for a 2019 Wishing Shelf Book Award, a competition for independently published authors.

Woll, of River Falls, and Rhein, of Chippewa Falls, talked about the writing project during a recent conference call.

“I was a fan of (Rhein’s) first book about the Birkebeiner (cross-country ski race), and he had read some of my outdoor writing,” Woll said. “We met at Hardee’s in Baldwin, and I told him that I had this mystery that was all put together but something didn’t feel right. And he said, ‘Well, let me take a look at it,’ and he did for a year and had some really good ideas, and we decided to collaborate.”

Woll is a retired public school teacher, principal and schools superintendent. His books include “North of Highway 8” (2013) and “Further” (2016), nonfiction collections of outdoor adventures; and “Death on Cache Lake,” a novel co-written with John Lyon. Woll also collaborates with his daughter Shelley on her “Sarah Saves” children’s series.

Rhein said Woll’s offer came at an opportune time, as he was awaiting edits on a book from one of his publishers, Perseid Press, so he had some free time.

“Right away I was attracted to Dan’s book just because I liked his approach,” he said.

Rhein’s books include the Perseid Press novels “The Reader of Acheron,” “The Literate Thief” and “Reckless Traveler.” His book “Beyond Birkie Fever” was originally published with Rhemalda Publishing. He also has a webpage about travel, writing and other things at StreetsOfLima.com.

Out of the ordinary

“Paperclip” deals with extrasensory powers as well as two real-life happenings: Operation Paperclip, a secret effort by the post-World War II American government to recruit Nazi scientists; and MKUltra, a secret CIA project in which the agency conducted experiments — sometimes on unwitting U.S. citizens — to assess the potential use of LSD and other drugs for mind control, information gathering and psychological torture.

What impressed Rhein about Woll’s manuscript was how he handled the extrasensory powers of the three main characters: friends Mickey and Carlie as well as their fearsome nemesis, Mort.

“Extrasensory perception is a fun thing to talk about, but you have to be careful about it because you can scare people off right away,” Rhein said. Specifically, he appreciated how, in some cases, the characters’ abilities were of the more ordinary type, such as when the phone rings and the recipient knows who it is.

“So once you have an entry point like that, you can build on that,” Rhein said. “You can go into deeper waters, but you have to guide people through the shallows first.”

Woll described his books as “accordions,” as he alters the size as he works on them.

“It was getting toward a quarter-million words when Walter started it,” he said.

But Woll emphasized how the two-author team worked in sync. “I don’t want to give you the impression that these are all my words and (Rhein) just cleaned them up and surgically removed the bad parts,” he said. “Walter totally changed some parts of the plot device.”

Rhein said some of his suggestions included turning more of the prose into dialogue and some changes at the beginning. Plus, he added, “We rethought the whole third act.”

Woll became interested in MKUltra from “Nightmare in Pink,” the thriller by John D. MacDonald (1916-1986). He had made that project a small part of “Paperclip.” But he and Rhein ultimately agreed to place it in a central role.

The plot also contains an element of synchronicity, the term coined by psychologist Carl Young that refers to events occurring in a meaningful manner but having no causal relationships. The concept hits close to home for Woll.

“I don’t want you to think I’m on cloud nine, but the concept of synchronicity is very real in my life — where you think of a person and then you meet them in Menards,” Woll said. “Or you have a bad feeling, and we’ve all had that, and the phone rings, it’s Sunday morning at 2 a.m. and it’s an issue.”

“I wanted a lovable kid with kind of hypersensitivity in this area of synchronicity and especially in precognition,” he said. “But I wanted it to have this quirky sense of humor in all the stuff that happened to him.”

During the interview, Woll gave Rhein credit for how he shaped Carlie.

“I wanted to be fair about presenting her as a person who survived,” Rhein said. “And this fits into Mort too because in the first draft Mort was pure evil, and I thought it would be more interesting to make him at least — and I think you should do this with all villains — you have to be able to identify with them at some point. There’s never been a conflict on Earth where both parties didn’t think both of them were in the right. So it just makes it more interesting when you’re writing it to give the reader a chance at some point to step back and say, well OK, I kind of see where he’s coming from. And that makes the character more terrifying, I think.”

“Mort kind of wrote himself,” Woll added. “He sort of grew as the book went on. I will admit I was influenced by Odd Thomas for Mickey. Mort just came full blown out of our own creative interaction but when I got done I said, ‘Oh my goodness we’ve created Anton Chigurh on steroids,” a reference to the terrifying character in Cormac McCarthy’s novel “No Country for Old Man,” also brought to life in the Oscar-winning film by the Coen brothers.

Admirers of “Paperclip” include Dave Wood, former books editor of the Star Tribune and past vice president of the National Book Critics Circle. As fellow River Falls residents, Woll asked his friend Wood to read a draft, and after doing so Wood said he’d be happy to share his praise for the book. “‘Paperclip begs for a read, a sequel and a movie,” it says in part, and another excerpt appears on the book’s cover.

Some of the Amazon comments (cumulative 4.8 out of 5 stars from 18 total reviews) particularly pleased Rhein, including these words from A. Weston: “Based on a real life project, Paperclip is a clever paranormal psychological thriller, involving government conspiracies; national security at the highest level; Nazi scientists living under false identities; and killer stalkers with a penchant for being in the right place at the wrong time.”

Woll and Rhein have started on a new project. As Rhein explained: “We go on long bike rides, and during the course of the bike ride you can talk out a lot of different things. So we’ve been working back and forth … We’ve got a pretty good treatment for a sequel.”

The co-writing process has been notably different, though. In contrast to Woll bringing Rhein a completed manuscript and then each one working on his own before sharing the revisions, “This is more collaborative from the get-go,” Rhein said. “It’s been a fun way to work on it.”

To Buy the Book

“Paperclip,” by Dan Woll and Walter Rhein, is available at the following locations: