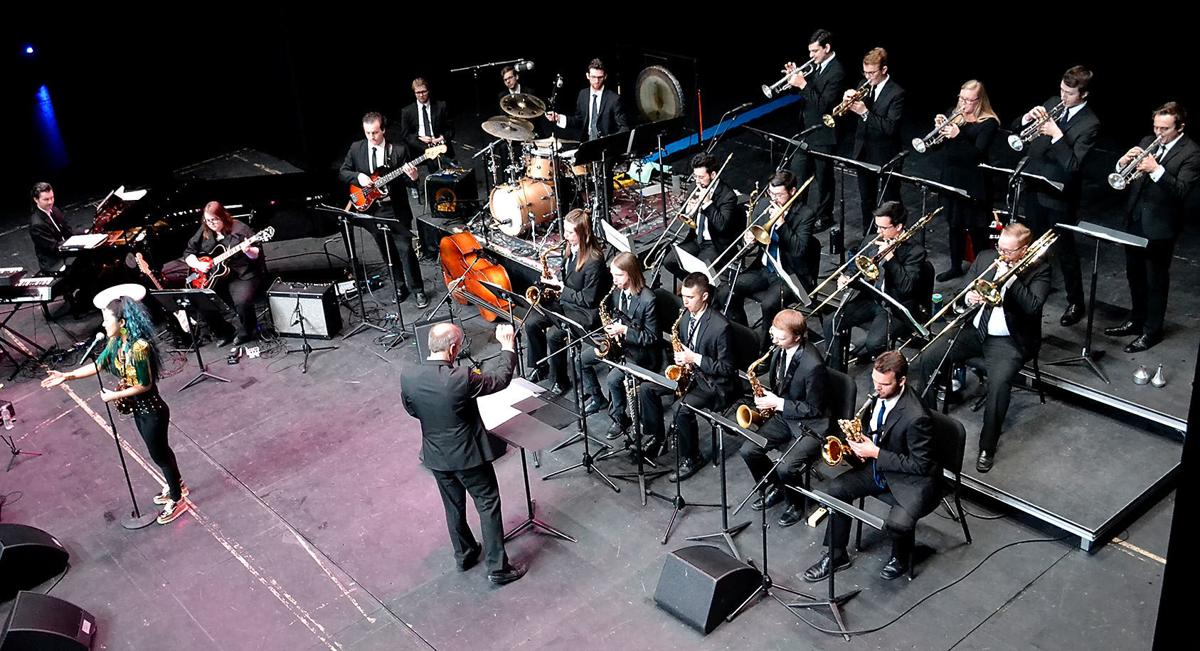 UW-Eau Claire’s jazz studies area, directed by Robert Baca, has gained a national reputation. Its top group is recognized as one of the premier jazz ensembles in the U.S. and, in the past decade, has toured throughout the United States, Europe and the Pacific Rim. 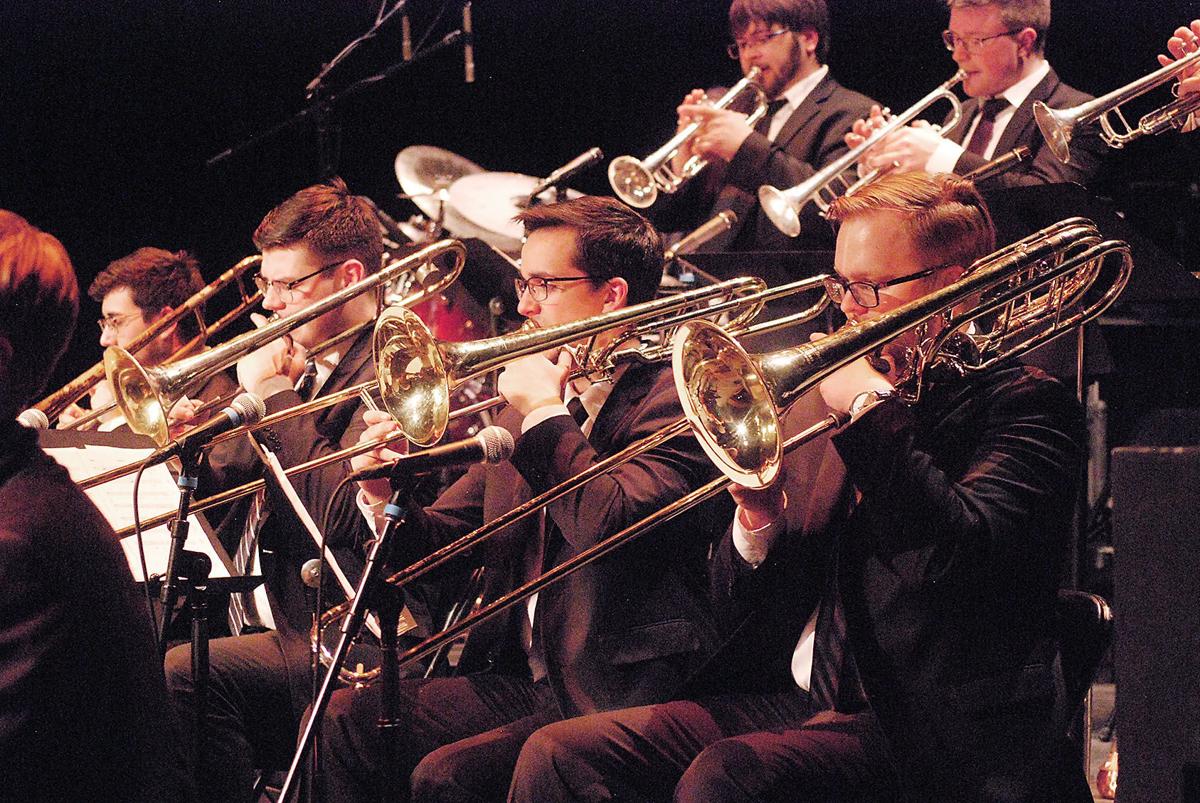 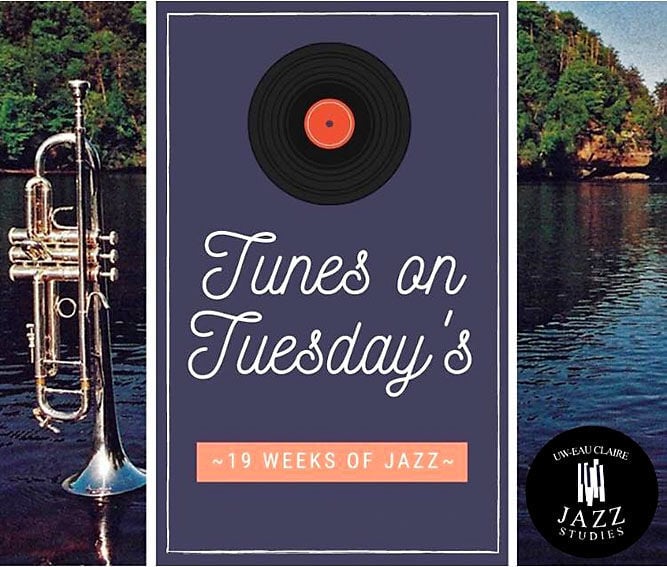 UW-Eau Claire’s jazz studies area, directed by Robert Baca, has gained a national reputation. Its top group is recognized as one of the premier jazz ensembles in the U.S. and, in the past decade, has toured throughout the United States, Europe and the Pacific Rim.

EAU CLAIRE — Undeterred by the COVID-19 pandemic, the UW-Eau Claire jazz studies area continues to share its talents with the community.

Live performances aren’t possible, but music lovers can sample tracks from the 21 albums jazz studies has released since 1993. With “Tunes on Tuesday’s,” listeners can go to YouTube each week and enjoy at least one song, and usually two, from one of those recordings. The presentation began in early September and will continue through Jan. 19.

Featuring hard-swinging numbers and ambitious symphonic compositions, the music shows why the area’s Jazz Ensemble I has become heralded for honors such as eight DownBeat Awards and two Grammy Award nominations.

Robert Baca, director of the jazz studies area, said one reason for these offerings is that “this music never gets old.”

“Because it is America’s art form, we embrace as Americans every aspect from its beginning, from Louis Armstrong up until the present day,” Baca said in a phone interview. “So bringing that music back to our ears again, for that reason alone I think is a good reason to do it.”

The idea for these featured tracks came from John Francis, a trumpet player and the jazz studies assistant.

Francis had realized that, with digital platforms the preferred source of music for many now, potential audiences are missing out on those albums.

“There’s no place to listen to any of them online,” Francis, of Chippewa Falls, said in a phone interview. “And I thought, ‘Well, that’s strange.’ Obviously, we’ve put in all this work to make these albums, and during the time they were made CDs were a big thing.”

One option would have been to release all 21 at one time, but the gradual method made the most sense.

“I thought, instead of putting them out all at once, because that’s a lot, we kind of want to do a little bit at a time and be able feature each of these different albums for what they were, because they all come from different bands,” he said.

“This was John’s idea,” he said. “We were talking about redesigning some aspects of the webpage, and he said, ‘You’ve got all these marvelous CDs — we should do something where the public can see those.’”

The YouTube recordings include a picture of the CD covers, one of which has drawn interest in its own right.

The album “Jazz in Clear Water: Rhapsody” (1999) takes its title from George Gershwin’s “Rhapsody in Blue,” which Jazz I performed with longtime piano professor Penelope Cecchini. The track premiered Oct. 13 on YouTube.

The cover photo features the players in a number of boats, including Baca standing with his back to the photographer and striking a conductor’s pose. Cecchini is there in a pontoon boat, along with a piano.

For those interested in how they managed to get the piano aboard, Francis credited digital technology.

“Rhapsody in Blue” also demonstrates another benefit of UW-Eau Claire: the opportunity to collaborate with faculty members in concert. “Obviously, the caliber of her playing speaks for itself,” Francis said. “Also, having faculty being able to come in and play on these albums makes it that much better.”

Another challenging piece the ensemble took on was Igor Stravinsky’s “Ebony Concerto,” which will be released on Jan. 19, the final “Tunes on Tuesday’s” release. That work appears on the album titled, appropriately, “Ebony.”

Clarinet soloist on the piece was Eric Schultz. Now an international prize-winning clarinetist and music faculty member at Coastal Carolina University in Conway, South Carolina, Schultz remembers the performance, which came about in part because he asked Baca if they could play it.

“A piece like the ‘Ebony Concerto’ is remarkable for an all-undergrad jazz ensemble to approach because it’s a classical piece,” he said in a phone interview. “This is Stravinsky, this is highbrow music. That would be a hard piece for any jazz ensemble to tackle so it’s incredible that we were even able to do it.”

Schultz recently has been listening to the “Tunes on Tuesday’s” performances. Of “Ebony Concerto” he said: “It’s incredibly clean.”

For that he credits Baca. “He talks to you in a way that makes you believe that you can do anything, and I don’t know how he does that,” Schultz said. “That’s why the ensemble can tackle a piece like that. It just made it seem like it was another everyday thing that we would do.”

The “Tunes on Tuesday’s” project, Schultz said, shows how programs can use technology to their advantage at this time.

Schultz also sees the current situation as an opportunity for musicians to further explore how to reach audiences.

“I know I have projects with some of the groups I’m working with now, kind of reimagining what’s even possible … some of the technology, even technology that people are aware of like Zoom,” he said.

That isn’t to say the pandemic hasn’t created tremendous hardship, but Schultz has seen positives. “People are either sinking or swimming, but I see a lot of swimming,” he said. “That’s really good to see.”

Listening to the past

Baca found it rewarding to relisten to those recordings as he was deciding which pieces would be featured on YouTube.

“I recognized and remembered a lot of the recording sessions for those tunes and tried to create a balance programmatically, and then to bring out the best that that particular band had to offer,” he said.

One aspect that “Tunes on Tuesday’s” highlights, Baca found, is how jazz studies emphasizes classical music in its program.

“We incorporate very complicated classical pieces within our CDs,” he said. “And ‘Ebony Concerto’ is one of those.”

So is “Rhapsody in Blue,” which Gershwin wrote as a jazz composition, but symphony orchestras have given a different feel from what a jazz band does, Baca said.

“So it was an absolute thrill for Penelope Cecchini to play that piece because she had to totally relearn it a different way than what she’s used to, and she’s played it a bunch of times.”

Besides enjoyment for the listeners, the releases help spread the word about the quality of the jazz studies area.

“I think it just really showcases the caliber of musicians that we have been blessed with the past 20-plus years and what we can continue to see going forward in these projects,” he said. “And just inspiring the current generations of musicians we have at the university to see what kind of came before them. Obviously, it’s a legacy, sometimes a little intimidating to look up to, all the great musicians that are now on Broadway and out in L.A. recording and all that stuff.”

Some of the former students who have achieved notable success are: Scott Pingel, principal bassist with the San Francisco Symphony; trumpeter Jeremy Miloszewicz, whose credits include lead trumpet in Broadway orchestras; and Tom Luer, saxophonist and L.A. recording artist.

While live performances for the public haven’t resumed yet, Baca and the students were delighted to discover the three jazz ensembles (one fewer than usual because of the pandemic) can rehearse together in person.

“We really were very fortunate in that our rooms, with social distancing for an ensemble of 17, fit perfectly in a social distanced manner,” Baca said. “Along with masks and bell covers for sure. But we were able to play together. “

Baca elaborated on that good fortune. “I can’t express the look on the students’ faces the first rehearsal that we had that we were able to play together — it was indescribable.”

With live performances out of the picture, Baca has focused on recording, with the help of Lena Sutter, sound engineer for the university’s department of music and theater arts.

“We are blooming where we’re planted,” he said of the recording emphasis. “And so again we’re very blessed that we’re able to rehearse as a full ensemble, and so we’re taking advantage of skills that we may not necessarily have time to do when things are normal.”

Two of the projects include:

• Working up an hourlong recorded concert that will hopefully be released yet this fall and during Black History Month in February. The concert’s title is The Music Speaks for Itself: The African American Experience.”

• An acclaimed new jazz reimagining of Gustav Holst’s “The Planets” by composer Jeremy Levy. Baca is hoping that can be performed in December or perhaps February or March.

Their efforts show creativity can flourish even under trying circumstances.

“It can be a blessing if you take it the right way,” Baca said. “And if you utilize it. Obviously, practicing is something a lot of people are doing now. And COVID kind of has even separated those who are really dedicated and passionate and practicing a lot more.”

Baca describes that mindset with a saying: Growing where you’re planted. Francis repeated that in the phone conversation as well as observing how it has played out in jazz studies.

“I feel for the freshmen a little bit, not having not the full college experience,” he said. “But I know at least the music students that I’ve seen are really trying to just take advantage of everything in obviously this new situation.”

Baca has seen that attitude in his students, and it impresses him. He got the same feeling when he listened again to the 21 recordings his students have made.

While acknowledging the uncertainty of any major undertaking, “when we are in the weeds of a project and we’re not sure how it’s actually going to come off,” he’s gratified with the results. “To hear in retrospect, five years later, 10 years later, and to see that quality of musicians at that age play, I am a proud papa,” he said.

Thanks to “Tunes on Tuesday’s,” listeners can enjoy the rewards of that effort as well.

• To view “Tunes for Tuesday's” on YouTube, go to tinyurl.com/y5dn5qvy.

• UW-Eau Claire’s jazz studies area has made two videos during the pandemic:

-- “A Time to Heal” features a commissioned work composed by UW-Eau Claire guest artist and jazz studies instructor Adi Yeshaya and performed by students in UW-Eau Claire’s Jazz Ensemble I.

Both works were made with the help of Lena Sutter, music and theater arts department recording engineer and supervisor for recording arts internships.

For more on those projects, go to tinyurl.com/y3dc4ydq.

• More about events – live, virtual and recorded – by jazz studies and other parts of the UW-Eau Claire music and theater arts department can be found on Facebook: facebook.com/uwecjazz, facebook.com/UwecMusic.