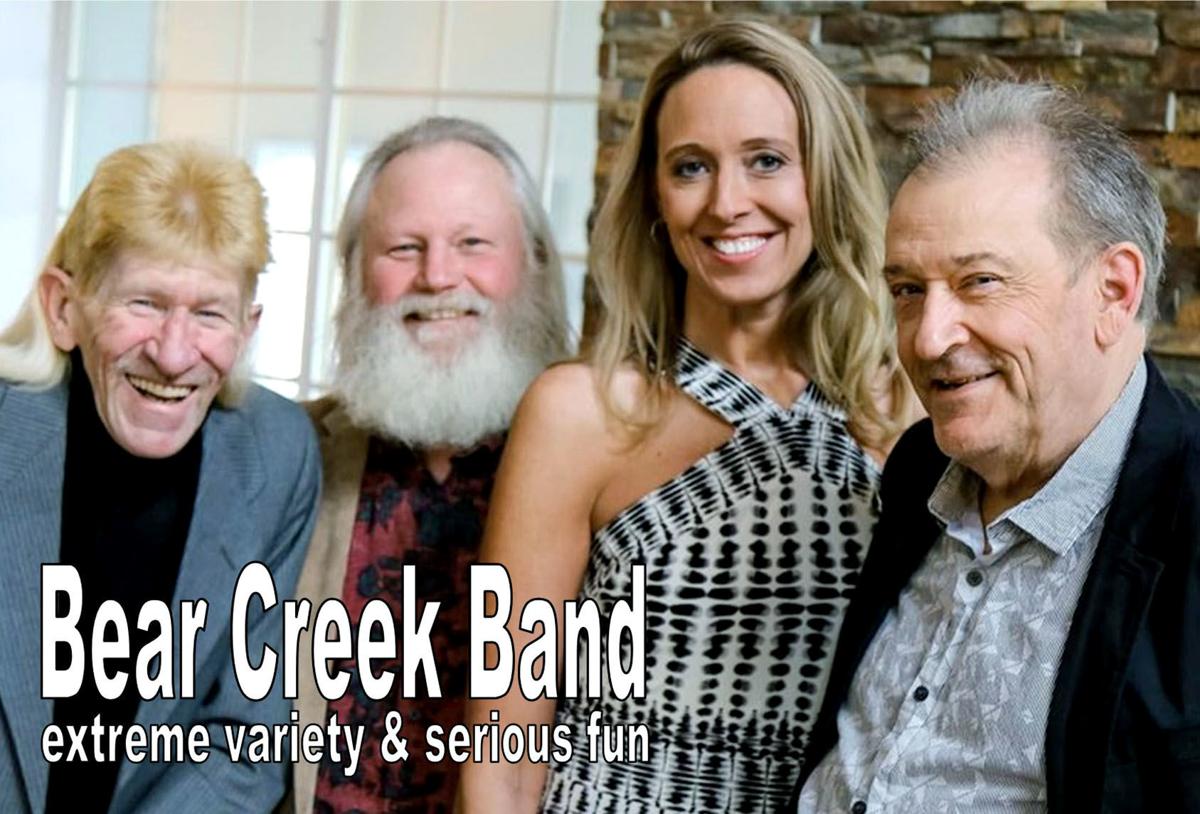 The current lineup of the Bear Creek Band can be seen in a publicity photo: J Owen Smith, Randy Bartlett, Lizzy Asaba and Dan Callan. The band takes pride in the description under the name: “extreme variety & serious fun.” 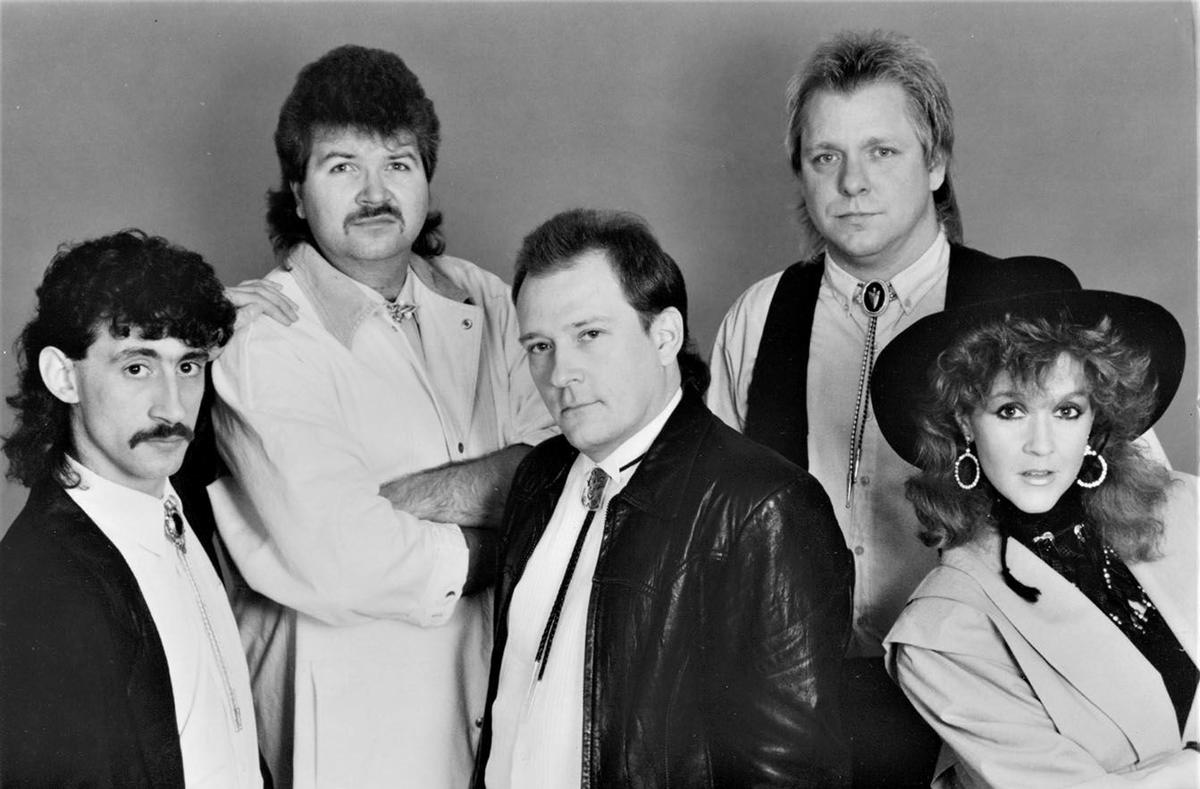 The current lineup of the Bear Creek Band can be seen in a publicity photo: J Owen Smith, Randy Bartlett, Lizzy Asaba and Dan Callan. The band takes pride in the description under the name: “extreme variety & serious fun.”

EAU CLAIRE — Dan Callan says he’ll play music professionally for as long as he can because, he jokes, “the Bear Creek Band 401(k) isn’t too good.”

Still, the Durand keyboard player-vocalist has invested a whole lot in the band since starting it in 1981 — and the group has seen some memorable returns. Among the Bear Creek Band’s achievements:

• Performing as far north as Winnipeg, Canada; as far south as the Florida Keys; east to Philadelphia; and west to San Diego.

• Getting the single “Falling in Love Right and Left,” from their self-titled 1986 album, on the Cash Box and Billboard charts, no easy task for a band without major label support.

• Opening for a long list of big-time stars, including Garth Brooks.

As part of their 40th anniversary celebration, the Bear Creek Band will play an alumni show from 2 to 6 p.m. Sunday, Sept. 26, at Roadhouse 25, 103 S. Highway 25, Wheeler. It stands to reason the concert will draw a big crowd, as more than 100 people, counting musicians and crew members, have worked in the Bear Creek Band over its history.

The band plays a self-described “extreme variety” of music. That stems from their history as a popular country act and Callan’s grounding in rock music.

“I played a lot of rock ’n’ roll through the ’70s,” Callan said during a conversation at an Eau Claire coffee shop.

That history covers the Renditions in both a high school lineup — which won an Eau Claire battle of the bands contest — and, after Callan graduated in 1970, a college version. He also played in groups such as the Exchange, Sweet Dreams, Kicks and Prime Choice.

“He said, ‘I bought a steel guitar, so here’s a key bass. You’ve got to learn how to play it,’” said Callan, who has continued with the instrument.

As time went on, Prime Choice disbanded, and the Big Bucks Band started. That turned into the Bear Creek Boys around 1980, and, when singer Deborah Schankey joined, they revised the name.

“Basically the Bear Creek Boys was no longer the Boys when we added a girl,” Callan said.

The chart success of “Falling in Love Right and Left” came at a time the music industry was significantly different from how it is now.

“It’s pretty hard when you’re independent trying to do that,” Callan said.

The recording came about after Ken Harvey and Wally Pietrzen joined the band. In particular, Harvey brought experience such as playing in the band of Dottie West (“He actually lived in Dottie West’s basement,” Callan said) and with Bobby Vee.

“I credit him with learning a lot about the business, from working with somebody who had the experience that he had,” Callan said. Harvey eventually left the Bear Creek Band for the Memories, another longtime local group, and he now lives in Tennessee.

Leonda, the Bear Creek Band’s vocalist on the record and for about 10 years, recalled where Harvey got the idea for the song.

“Larry Gatlin actually said to Ken Harvey one time they were backstage, ‘Oh man, I just keep falling in love right and left,’” the Eau Claire resident said during a phone conversation.

Leonda even sang a few lyrics of the upbeat tune during the phone interview: “I keep falling in love right and left / can’t seem to find one that’s best.”

Winning the WAXX band contest a couple of times also helped the Bear Creek Band raise their profile, as they got to know people at the radio station such as then-music director Tim Closson.

“He was connected so he helped us an awful lot ... getting the airplay and charting the record,” Callan said.

The Bear Creek Band’s career got a further boost from handling the lights and sound for shows they played, particularly at the Medina Ballroom (now known as the Medina Entertainment Center) in Minnesota. The production work helped them score opening slots with a host of luminaries.

Vocalist Wendy T, who sang with the band in the late 1980s through the early ‘90s, appreciated those opportunities as well as playing at major music festivals. For instance, the band played at the inaugural Country Fest near Cadott and Country Jam USA outside of Eau Claire.

“It just made us feel like stars because we got to play the big stage,” Wendy T, who lives in Morristown, Tennessee, and performs professionally, said in a phone interview.

The Bear Creek Band’s opening slot with Brooks at the Medina Ballroom happened in the early 1990s, about the time iconic single “Friends in Low Places” came out — although Brooks had success with a couple of songs from his self-titled debut album: “The Dance” and “Much Too Young.”

For all his musical talents, Brooks’ off-stage demeanor impressed Callan even more.

“He sat there at the end of the show and signed autographs for 2½ hours,” Callan recalled. “He’s actually probably the nicest guy that we’ve ever worked with. He also came up to each one of us when we were done and thanked us for the production because he understood we were doing that. And he was happy with the situation.”

The exposure led to extended national tours for the Bear Creek Band, although it didn’t make things easier on the home front.

“With the influx of that kind of thing, being on the road for sometimes two to three months at a time and not being home, would not be too accommodating to girlfriends or wives of people, relationships,” Callan said. “It wasn’t for everybody, so you’d have some turnover.”

The busy schedule continues despite challenges such as fewer venues presenting live music. Callan mentioned, for instance, a couple of casinos that have turned their live entertainment lounges into sports betting venues.

Of course, COVID-19 has taken a brutal toll on live music, although the Bear Creek Band have endured.

“Because we’ve been around so long, even through last summer and this summer we stayed really busy because everything we lost last summer for all the festivals that were shut down, street dances, that stuff, we were able to pick up outdoor gigs from places that we played around here,” Callan said. “Anybody with outdoor areas has been doing well. And I think even in the future that’s going to be the way it is. Because with COVID, you’re a lot safer being outdoors.”

Asked about the Bear Creek Band’s keys to longevity and full schedule, Callan cited the versatility.

“We try to have a quality product,” he said. “Something that’s a good variety so we can appeal to a wide selection of people. We’re no longer just a country band.”

As an example, Callan noted their appearances at the city of Altoona’s summer music series.

The Bear Creek Band have worked to be professional onstage and off.

Although they don’t play in Eau Claire a great deal, the Bear Creek Band still do well in Volume One’s annual readers poll. “We might not win it, but the thing is, we’re second or third, it seems, for the last three or four years,” Callan said.

The band also earned, for the third time, a nomination for a People’s Choice Award given by the Wisconsin Area Music Industry (WAMI). The organization consists of performing artists, media and music industry insiders and professionals as well as teaching institutions and instructors.

“Clubs keep hiring us so we must be drawing the people and playing what they want to hear so they can sell their products and come out on it,” he said.

While Callan shares credit for the band’s success, four former members, when asked about how the group continues to thrive, cited his leadership.

“Dan Callan, of course,” Wendy T said. “Dan’s great; he does it all. He’s the producer and the manager, the booker, the sound man, the bass player, the harmony singer. It’s very impressive. Dan’s very multitalented he can do a lot of things at the same time. And he had drive and he wanted to do it.”

“I would have to say that that’s Dan,” Leonda said. “I don’t think he’ll ever stop. He’ll probably be 90 and still playing in the band.”

“I can’t believe that Dan has the energy to do what he’s doing now,” he said.

Bob Holden, Mondovi resident and drummer for the band mainly in the 1980s, spoke of Callan’s advocacy as well as musicianship.

“He’s kind of kept, not only Bear Creek, but the whole live music scene alive for 40 years,” Holden said. “I used to go watch Dan before I could even play drums, and we’re the same age. But he got a jump on a lot of people.”

Callan sounds as though he still enjoys what he’s doing.

“I’m happy because, nothing against it, but I’d rather do this than roof a house or something like that,” Callan said. “As long as I can do this I don’t plan on slowing down until I have to. Right now, thank God, I don’t have any health issues or anything that’s going to keep me from doing it, unless the whole bottom falls out of the business.”

Callan also seems to appreciate is the friendship and mutual respect among current and former band members.

“Most of the people that have been in the band, we all still communicate,” he said. “There isn’t really too many bad things where people aren’t getting along. Part of that is that we sort of have the philosophy that it used to be if clubs get good entertainment and venues do, the club stays in business and everybody prospers. So it’s not to us a cutthroat thing. What we used to do in the old days and still do it today, if there are places, we tell them about our friends that have good bands because it’s beneficial for all of us.”

That generous attitude stands as another way, besides the Bear Creek Band’s long-lasting success, that Callan’s time, effort and musicianship are paying off.

Details: The venue’s phone number is 715-989-1021. For more information about The Bear Creek Band, including the schedule, go to the band’s Facebook page or to bearcreekband.net.

Other area gigs in September: