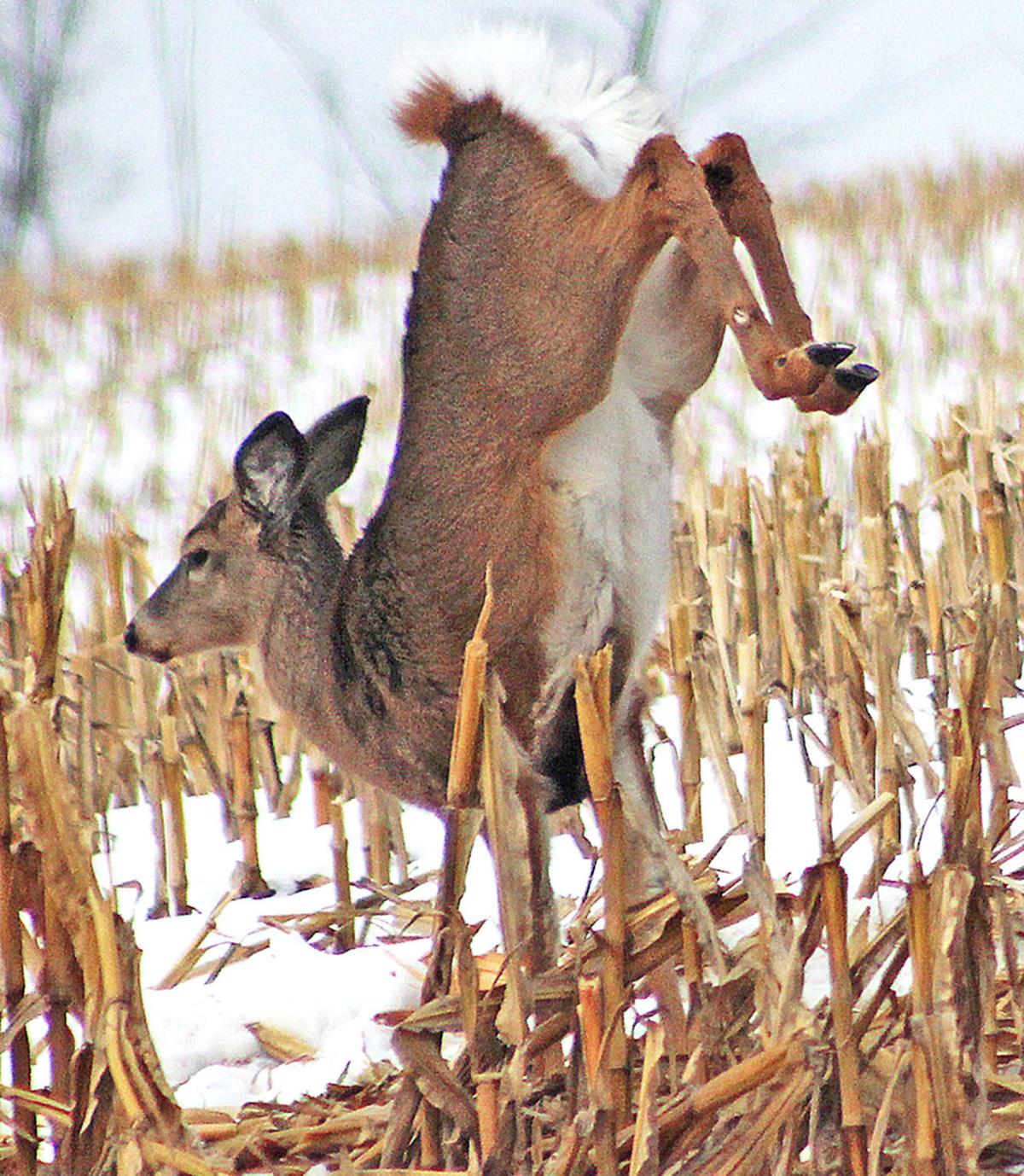 Department of Natural Resources officials confirmed a deer found dead in Washburn County on Thanksgiving Day was killed by a cougar. 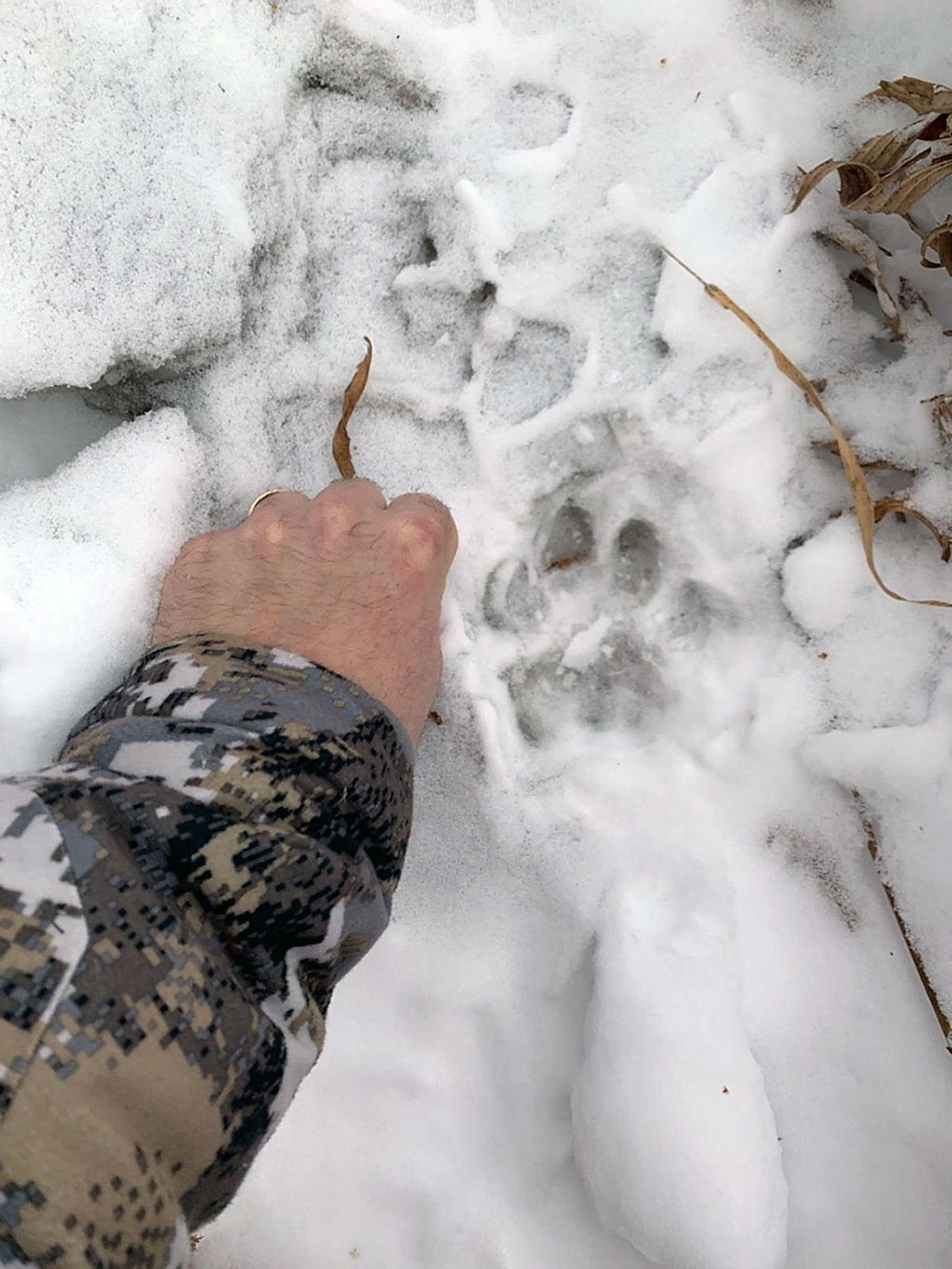 A cougar’s tracks were found near a dead deer in Washburn County.

Department of Natural Resources officials confirmed a deer found dead in Washburn County on Thanksgiving Day was killed by a cougar.

A cougar’s tracks were found near a dead deer in Washburn County.

BARRONETT — A whitetail deer found dead in Washburn County in the town of Barronett during the recent Wisconsin gun deer season was killed by a mountain lion.

The fresh kill was discovered by deer hunters near their deer stand on Thanksgiving morning.

The cougar kill was confirmed after examination by Department of Natural Resources biologist Nancy Christel of the Spooner DNR Service Station.

Not far away, on the Barron County side of the county line, Nick Anderson found fresh tracks on the property of his aunt, Kathleen Strong, owner of Yellow River Game Farm. The big cat apparently was heading north, into Washburn County, where it attacked and killed the deer.

“It was Thanksgiving morning,” said Louis Muench, who was hunting with his father, also Louis. “My dad and I went deer hunting. When it got light, I noticed a dead deer about 20 yards from Dad’s stand. We thought the neighbors might have shot a deer and not recovered it.”

The hunters examined the dead deer, a small doe, and were shocked by what they found.

Those tracks, said Muench, were about 4 inches wide.

“They were too big for a coyote or a bobcat,” he said. “We thought it might be a wolf. But looking closer, it was definitely a cat. There were no gunshot wounds. A cougar had killed it there right in between the two snowstorms — it was fresh in the snow. You could see where the deer had been feeding on acorns, and you could see the tracks where the deer had run. It was so fresh, we think when we walked out we might have scared the cat away.”

Muench said he has put up a wireless trail camera, but so far the cougar has not returned.

The hunters took DNR biologist Nancy Christel out to the sight to examine the kill.

“She skinned it and looked at the wounds,” Muench said. “She confirmed it was a cougar. I sure hope I can get a picture of it on the trail camera.”

Not far away, across the Barron County line at Yellow River Game Farm, owned by Kathleen Strong, there was also excitement going on. She tells her story.

“On Friday, I received a call from a neighbor, Lief Arnes, asking if it was true that confirmed mountain lion tracks were found near the game farm,” Strong said. “I explained that they weren’t confirmed and that they were found on, not near, the game farm. Lief mentioned that he had been shown photos of the tracks by Louis Muench. I realized then this had to be another sighting as no one outside our family had access to the pictures taken here, so I called Louis Muench for more information.

“According to Louis, he had found the tracks in the woods off Grassy Lake Road north of the game farm. He had also found a dead fawn with multiple bite marks on it and a distinct track right beside it that he believed was a from a mountain lion. Additional tracks in the snow showed the fawn had run frantically in circles before the lion caught it and broke its neck.”

Strong contacted Kevin Morgan, wildlife biologist for Barron County, on Thanksgiving about the tracks found on her property by her nephew, Nick Anderson, a North Dakota resident familiar with mountain lions.

“Morgan’s initial impression was that it was most likely a wolf track, but he started revising his initial opinion after seeing more photos,” said Strong. “Once I learned about the tracks and kill on Muench’s property, I contacted Nancy Christel, wildlife biologist for Washburn County with details and photos. She suspected the tracks were made by a mountain lion, but wanted a report and photos sent to a rare mammal specialist for confirmation.

“Nick Anderson completed the report and sent it in. The specialist positively identified the tracks as made by a mountain lion. However, it needed to be confirmed that the tracks actually were found here and were not photos taken in another state and someone was trying to pass them off as having been taken here.

“To do that, Nancy came out to the Muench property and viewed the kill and observed the surroundings which matched the surroundings in the photos. After the rare mammal specialist received confirmation that the tracks were indeed found in this area, he requested that Nancy skin the animal to rule out that it was not killed or injured by a car, and was mauled after the fact by the mountain lion, versus the mountain lion attacking and killing the fawn.

“Nancy skinned the animal and determined that the broken neck, bruising around the neck and multiple bite wounds were evidence of an attack by a mountain lion, versus some other factor.

“With that, another pin was placed in the map of mountain lion sightings in Wisconsin.”

Christel said she was excited to be able to confirm that a mountain lion had made a kill in Washburn County, something that may not have happened for many, many years.

“Yes, I was able to confirm that it was a cougar kill,” said Christel from her office in Spooner. “It was in Washburn County, Barronett Township, real close to the Barron County line. It was a lot of fun to go out and see it. This is cool!”

A mountain lion was famously treed and photographed in March of 2009 by hound hunters in Spooner, and Christel says that others have also been passing through the area. Since the Spooner cougar, many sightings have been confirmed through the state as the big cats seem to be moving into Wisconsin.

“There have been other unconfirmed sightings,” said Christel. “With this one coming through, if people have cameras out there, maybe check them.

“The deer was killed on Thursday, and I looked at it. They also took very good, clean photos, real clear and fresh. That is what we need, nice clear pictures, and maybe something to scale so we can judge size — Louis put his fist near the track so we could see how big it was. Then we have to confirm the location, which I did. There was no genetic testing, since it was confirmed.

“They are coming over from the Black Hills, looking for mates. What we need is for a male and female to get together out there. But so far we have not been able to document a female here, only males.”