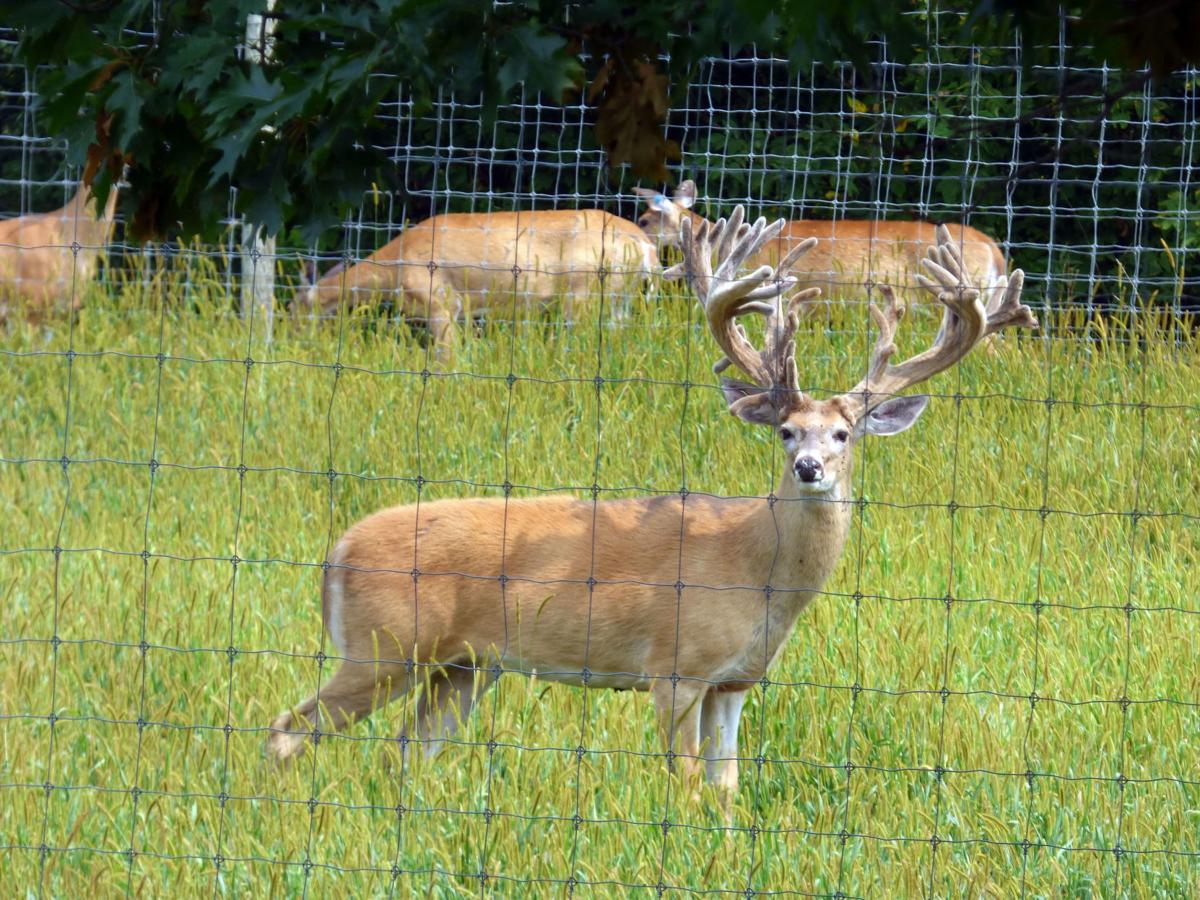 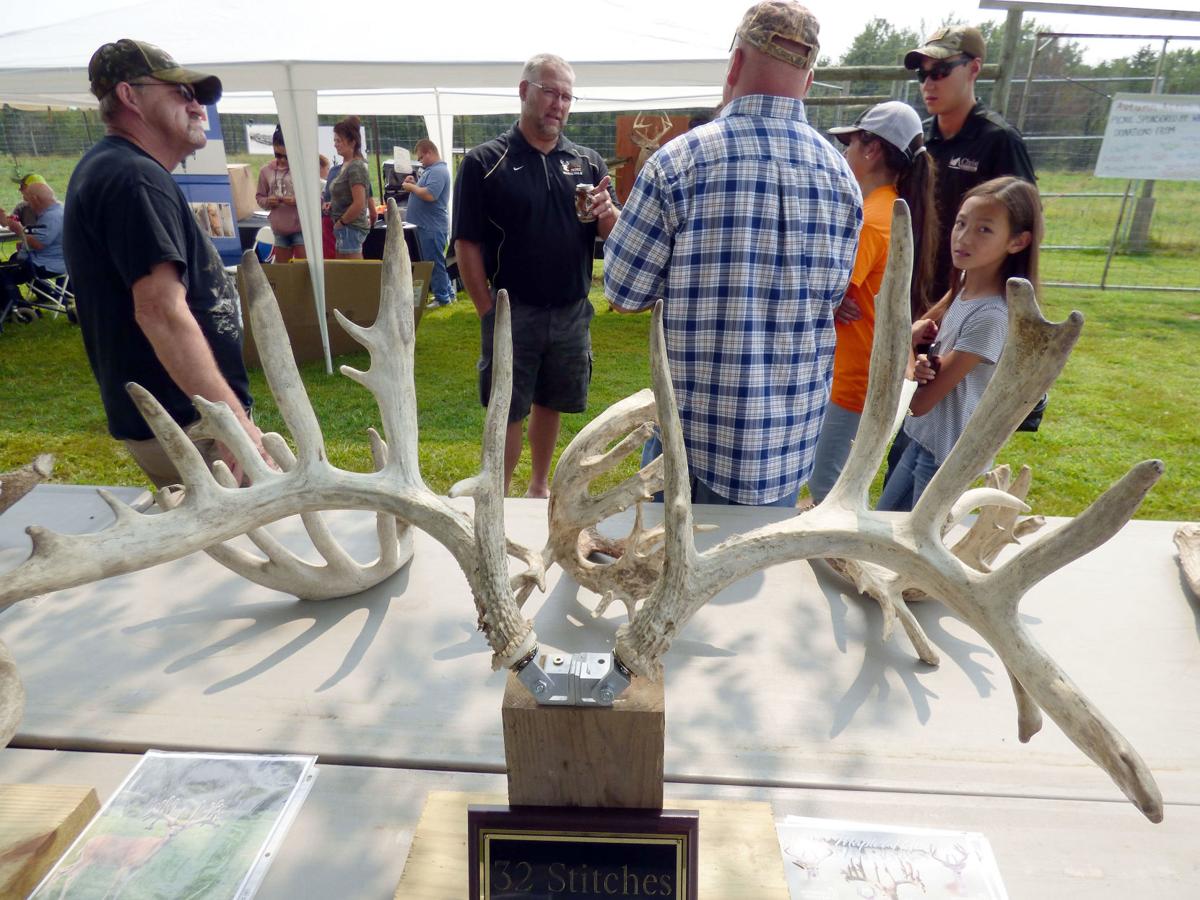 Dan Brown, center, who owns Autumn Acres Whitetails along with his wife Jane, talks with guests during the Whitetails of Wisconsin summer open house and picnic Aug. 18 at his Eau Claire County deer farm. 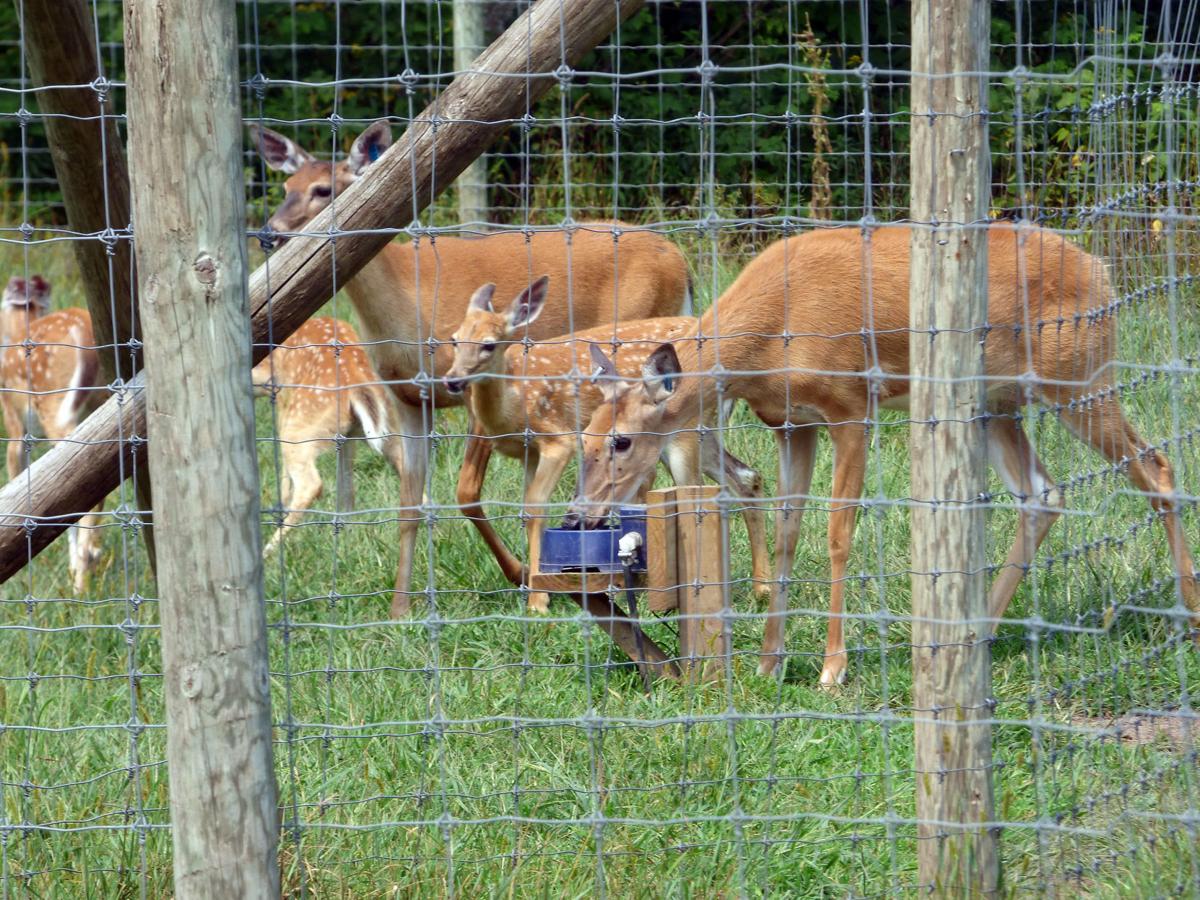 Whitetail deer are separated in pens by age and sex at Autumn Acres Whitetails deer farm.

Dan Brown, center, who owns Autumn Acres Whitetails along with his wife Jane, talks with guests during the Whitetails of Wisconsin summer open house and picnic Aug. 18 at his Eau Claire County deer farm.

Whitetail deer are separated in pens by age and sex at Autumn Acres Whitetails deer farm.

FALL CREEK — For Dan and Jane Brown, the discovery of a deer that tested positive for chronic wasting disease in Eau Claire County this spring was a call to action.

As a result, the Browns, owners of the Autumn Acres Whitetails deer farm in rural Fall Creek, decided to host the Whitetails of Wisconsin summer open house and picnic at their farm on Aug. 18.

The intent of the event, they said, was to invite people to their farm to show them how the industry is working to control the spread of the disease that is deadly to deer.

“Captive deer farming has kind of become the scapegoat for the spread of CWD,” Dan Brown said. “That’s why it’s so important for us to educate the public on what we do ... Just because there’s a fence here doesn’t mean deer on one side of the fence are any different than the deer on the other side of the fence.”

The Browns started Autumn Acres Whitetails, S5605 Sunrise Drive, Fall Creek, as a breeding facility with about 90 percent typical and 10 percent non-typical genetics in 2013. Eight of their 20 acres are fenced.

Bucks on the farm are grouped by age while does are kept in breeding pens and fawns are kept with does until the weaning period, which begins in September, Dan Brown said.

The farm is currently home to about 90 deer, with about 30 adult bucks one year or older, about 23 buck fawns and about 26 adult does.

The Browns have already sold and will be moving all of this year’s doe fawns.

“We don’t need to keep any does this year,” Dan said. “We’re plenty doe heavy.”

The open house and picnic drew several hundred people to the farm, many of them fellow farmers.

“Everybody’s interested in seeing deer,” Dan Brown said. “The people who were here were very engaged. They wanted to hear what we were about and what we had to share. That’s why we do this. It’s important to have the community understand what deer farming is.”

With 380 deer farms and 75 hunting ranches in the state, the deer farming industry contributes about $75 million annually to the state economy, according to Wisconsin Cervid Farmer’s Foundation board and state tourism officials.

That figure could be in danger with new regulations requiring additional fencing on deer farms, Dan Brown said.

The state Department of Natural Resources board voted on Aug. 8 to approve an emergency rule that requires deer farms to upgrade fences to prevent captive deer from mixing with wild ones and spreading CWD.

The rule calls for the operators of deer farms where CWD has been detected to install a second fence or a solid barrier to protect deer at farms from mixing with wild deer at a cost to state deer-farm owners of about $876,000, according to DNR estimates.

CWD-free deer farms would have three fencing options, including adding a second fence, adding a solid barrier or installing an electric fence, which the DNR estimates would cost owners at least $1.3 million statewide.

Farm operators would have one year to comply with the regulations.

“It’s something that’s going to force a lot of people out of business,” Dan Brown said. “Unfortunately, the cold, hard truth is that we’re kind of on the fence, no pun intended. That’s a big expense if people have to go and double fence. It’s going to hurt a lot of people, not only breeding farms like ourselves but also hunting preserves.”

He hasn’t calculated the cost of double fencing but estimated it to be between $30,000 and $40,000 at his farm. He added that because his farm is next to woodlands, he is limited on space and would have to get smaller because of the added fencing, forcing him to cut back on the number of deer he could raise.

“This isn’t a money-making business,” he said. “It’s a lot of work to break even. We’re just in our infancy and just starting to have our deer mature to where they’re a marketable deer. It’s a crazy time right now, but we’ll see what happens.”

“There is new research that shows that there could be some genetic markers that could be resistant to CWD,” said Laurie Seale, owner of Maple Hill Farm near Gilman. “A lot of us are going to start breeding in that direction. If we can breed away from CWD, then we’d no longer have to worry about the disease in our animals.”

Whitetails of Wisconsin and deer farmers continue research efforts to find a way to prevent CWD or to slow the spread of the disease, Dan Brown said. Because of that work, he said he is optimistic the deer-farming industry will survive CWD.

“The farmers are all working together for the common cause,” Dan said. “It’s fun to be able to look out the window and look at deer if you have a passion for deer.”

Jackson is assistant editor at The Country Today, a rural life newspaper published by Adams Publishing Group. He can be reached at 715-833-9275 or nathan.jackson@ecpc.com