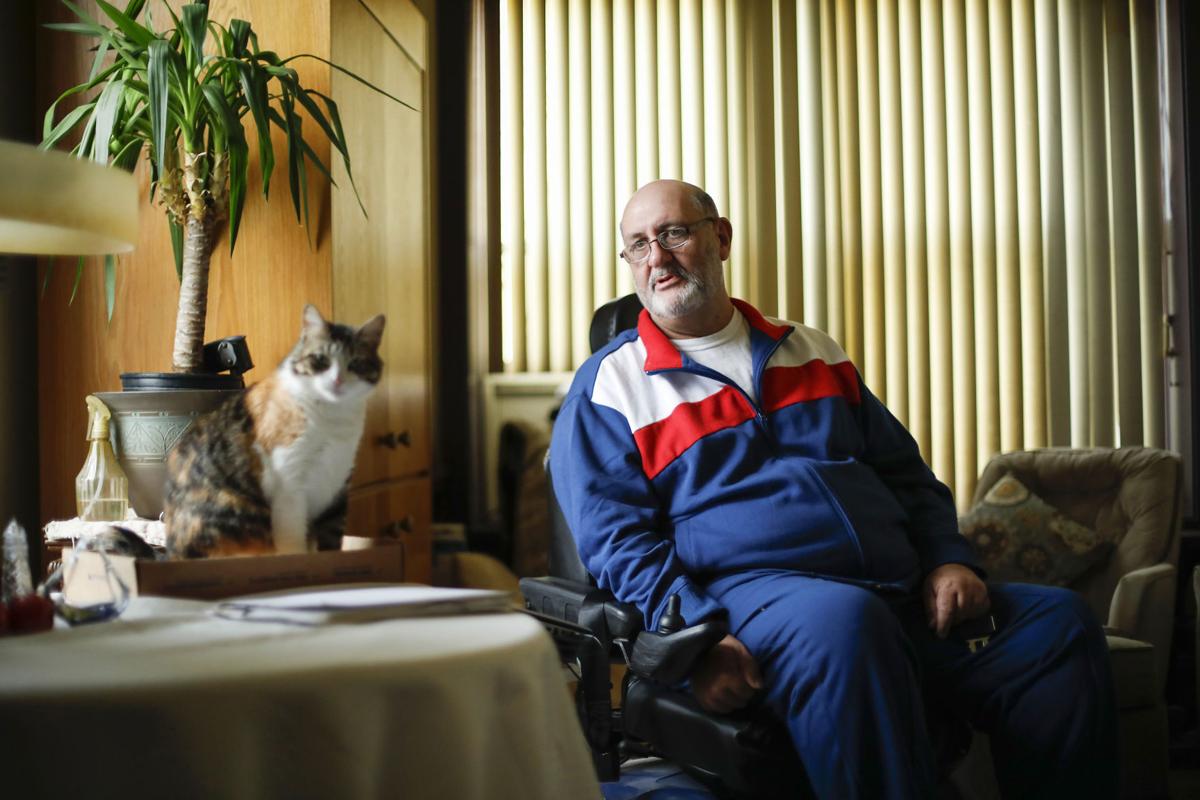 Jim Watkins, 59, a longtime chronic pain patient from Chicago, says he has been made to feel like a criminal at the doctor’s office because of his opioid pain prescription. 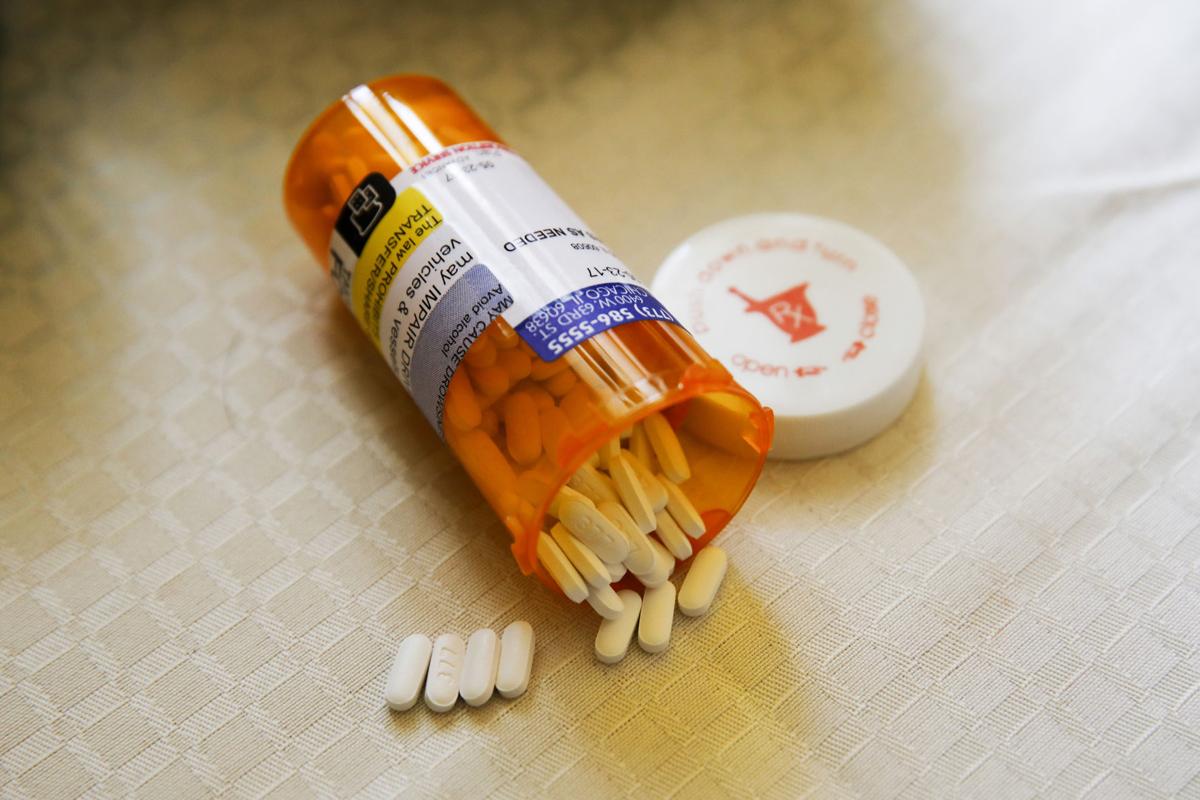 Watkins must now see his doctor more frequently and undergo questioning that he considers harassment about his opioid use to obtain his tramadol pills, an opioid he takes for serious pain caused by osteogenesis imperfecta, also known as brittle bone disease.

Jim Watkins, 59, a longtime chronic pain patient from Chicago, says he has been made to feel like a criminal at the doctor’s office because of his opioid pain prescription.

Watkins must now see his doctor more frequently and undergo questioning that he considers harassment about his opioid use to obtain his tramadol pills, an opioid he takes for serious pain caused by osteogenesis imperfecta, also known as brittle bone disease.

CHICAGO — Jim Watkins lives with pain so intense it can snatch his breath away. He has osteogenesis imperfecta, also known as brittle bone disease, and the best way he has found to control the anguish is with daily doses of tramadol, an opioid medication.

He has been on the drug for nearly two decades, and for almost all of that time, his doctors gave it to him without any problems. But over the past few years, he said, that has changed.

Watkins, a 59-year-old Chicagoan, is required to come in monthly to receive his prescription — he used to go as long as three months between visits — and each time, he said, he undergoes questioning about his opioid use that he regards as just short of harassment.

“(Chronic pain patients) are being singled out on a daily basis for something that other people have abused,” he said. “Those of us who have legitimate conditions, why are we being treated differently?”

Americans’ use of opioid painkillers has exploded since the mid-1990s, driven by changing philosophies on pain treatment, drug marketing campaigns and unscrupulous “pill mill” operators. The result, many experts say, has been a surge in addiction, overdoses and death.

Now, a reversal is underway. Opioid prescriptions have dropped sharply since 2012 as doctors have grown more conservative and the federal government has cracked down on what it deems “problematic prescribing.” Some chronic pain patients say the turnabout has gone too far.

They describe unwarranted dosage cuts from doctors and unprovoked suspicion from neighborhood pharmacists. And even those who have good relationships with their health care providers say they feel more and more that society views them as junkies, not patients.

“I don’t advertise the fact that I take these medications just because of the way people look on it, like I’m a drug addict,” said a 59-year-old Lincolnwood, Ill., woman who takes oxymorphone for back pain. “You mention it to someone, and it’s like, ‘Oh, you’re going to die; my cousin’s neighbor’s son died.’ They start connecting it with heroin abuse.”

But some believe the correction is long overdue. Dr. Andrew Kolodny of the Opioid Policy Research Collaborative at Brandeis University in Waltham, Mass., said the drugs have ill-served many people they were meant to help, condemning them to addiction while leaving their pain undiminished — or, in some cases, even worse.

“They’re stuck on these medicines they feel they can’t live without, and many of them may be right,” he said. “The trick is not to get more people stuck on opioids.”

Opioids inhibit pain signals traveling to the brain, and that trait has made them a prized medicine for thousands of years. But their addictive properties made many doctors hesitant to prescribe them for chronic conditions, said Theodore Cicero, a professor of psychiatry at Washington University in St. Louis.

“You were given aspirin,” he said. “The attitude was that you just have to put up with (pain).”

That changed in the 1990s after some medical organizations concluded that doctors were not adequately treating their patients’ pain. They created new standards that portrayed pain as “the fifth vital sign,” encouraging doctors to use more powerful medications in the name of compassionate care.

Another game-changer was the 1996 introduction of OxyContin, a powerful, time-release opioid aimed at patients with long-lasting pain. Drug company Purdue Pharma mounted a huge marketing campaign portraying the drug as less prone to misuse than other opioids.

That claim was false, as the company later admitted in a fraud settlement with the federal government. Drug abusers simply crushed the pills to unleash their full potency, and OxyContin swiftly became a leading product offered by shady medical clinics proliferating around the country.

“There were more than 1,000 pain clinics operating just in Florida around 2011,” said John Temple, a West Virginia University journalism professor whose book “American Pain” chronicles the rise and fall of a crooked clinic. “They were all churning out these prescriptions every day. I would say the vast majority were not for legitimate patients but for people who just walked in off the street.”

OxyContin wasn’t the only painkiller to soak into American culture: Overall opioid prescriptions more than doubled over 20 years, from 112 million in 1992 to 282 million in 2012, while per-capita consumption more than quintupled.

As the pills flooded into medicine cabinets, overdose deaths soared, according to the U.S. Centers for Disease Control and Prevention. While many fatalities were because of abuse, Kolodny said, some studies suggest the majority came from valid prescriptions.

The grim statistics caused many to rethink pain treatment. The CDC released guidelines advising doctors to be more cautious when prescribing opioids. The Drug Enforcement Administration tightened the rules for hydrocodone, one of America’s most frequently prescribed medications.

Meanwhile, the American College of Physicians declared that doctors should consider opioids a “last option” for the treatment of lower back pain, while the U.S. departments of Veterans Affairs and Defense recommended against prescribing the drugs for chronic pain.

If those messages weren’t loud enough, physicians could also consider the high-profile arrests of colleagues accused of indiscriminate opioid distribution.

“You’re not dealing with normal drug dealers in this situation — you’re dealing with doctors who have something to lose,” Temple said. “If they see another doctor being led away in handcuffs, that has a big impact.”

But Judith Paice, an advanced practice nurse who writes prescriptions for her work with cancer patients at Northwestern Medicine, said it’s not fear of the law that is steering medical professionals away from opioids — it’s fear of insurance companies.

Private insurers and the state’s Medicaid program are increasingly requiring prior authorization for opioid medications, she said, and the hassle of those restrictions has convinced some to steer clear of the drugs altogether.

“Many practices are saying, ‘I’m not going to prescribe opioids — it’s not worth it because of the time and personnel constraints,’ ” said Paice, past president of the American Pain Society.

Experts say patients on long-standing opioid regimens sometimes get “fired” by their doctors out of concern they might be abusing the medication. A 47-year-old Chicago woman said that has happened to her repeatedly.

She said she has dealt with crippling back pain since trying to work through a slip-and-fall injury she suffered in her 20s, when she was a cocktail waitress on a riverboat casino. She has spent much of the past two decades on one opioid or another.

She said three doctors have dropped her for vague reasons or no reason at all, including one just last year. The clinic she now attends has a strict daily limit on the amount of opioids it allows patients to have, and she said her new regimen does not adequately treat her pain.

“We walk on eggshells with our doctors,” said the woman, who asked to remain nameless for fear of being dropped again. “We’re afraid of being labeled, blacklisted. It happens to a lot of people.”

Some doctors say that even without abuse worries, opioids are a bad choice for chronic pain. Kolodny said patients’ suffering can be exacerbated by withdrawal symptoms, while other researchers have found that people on high doses of painkillers can become more sensitive to pain — a phenomenon known as hyperalgesia.

Dr. Asokumar Buvanendran, a pain specialist at Rush University Medical Center in Chicago and president of the American Society of Regional Anesthesia and Pain Medicine, said therapies such as epidural injections, biofeedback and even acupuncture have proved to be equally or more effective at pain relief than opioids.

“Large studies have shown that over a year’s time, it makes no difference whether you take narcotics or not,” he said.

Buvanendran noted that alternative treatments often are not covered by insurance companies. That has left chronic pain sufferers like Paula Gianfortune reliant on opioids.

Gianfortune, 50, of Oak Brook, Ill., said she injured her neck in two accidents, and the ferocious pain that followed has caused her to be on opioids for about 14 years. She wears a patch that supplies a steady flow of fentanyl, and takes hydromorphone pills when her pain spikes.

She said she would like to try nonmedicinal therapies but can’t afford the 20 percent co-payment required by her insurance policy. In the meantime, she said, she lives in fear that her doctors will decide unilaterally to cut her dosage or take away the medication altogether.

“Hurting people who need (opioids) to survive day to day is just so wrong,” she said. “You’re going to have people who are truly in pain resorting to doing illegal drugs, and good people will overdose and die. You’re going to be so desperate to get rid of the pain somehow.”