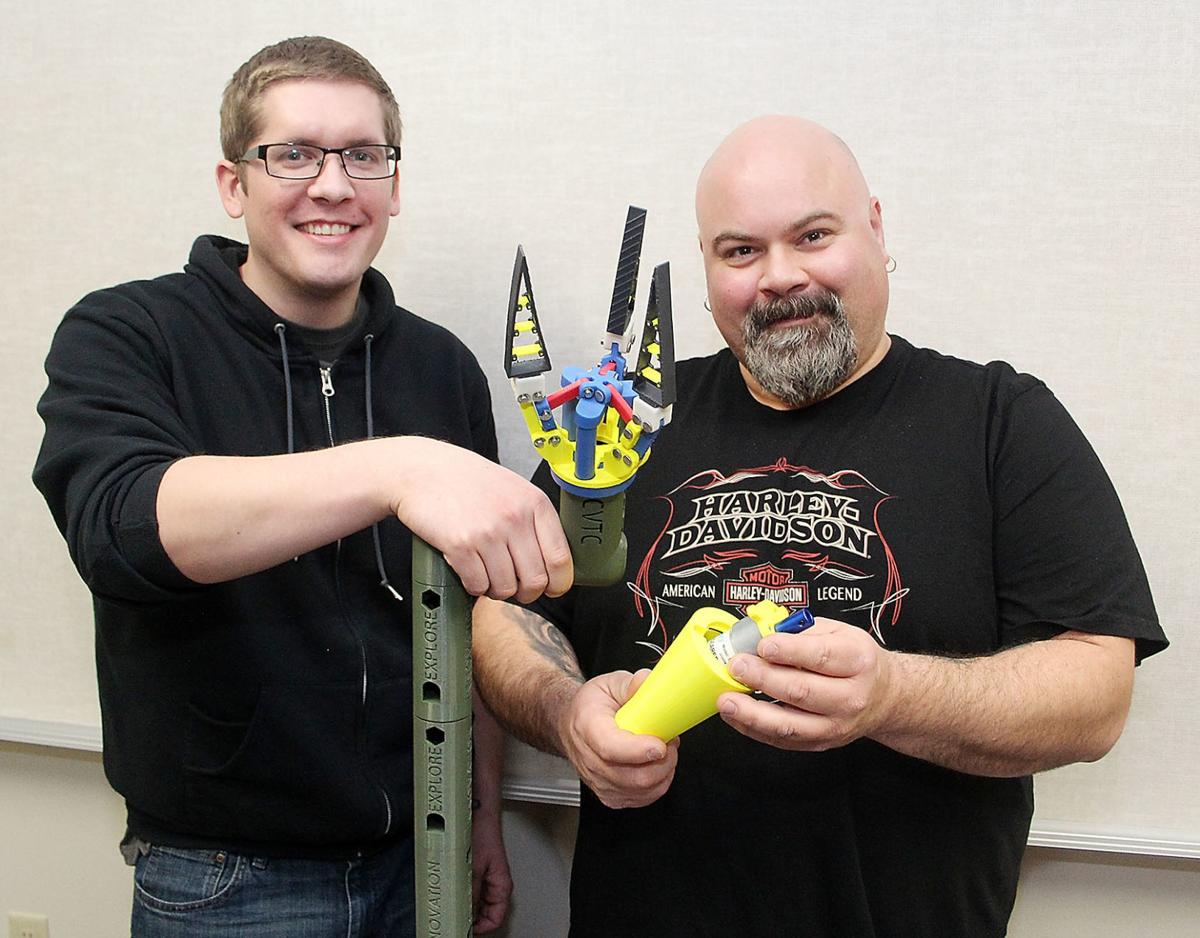 CVTC Mechanical Design students Alex Husfloen of Ellsworth, left, and Eric Wolle of Baldwin show the claw mechanism that earned them second place in the ATEA national design competition. Wolle is holding part of what would be a mechanical arm and showing how a small electric motor fits inside. 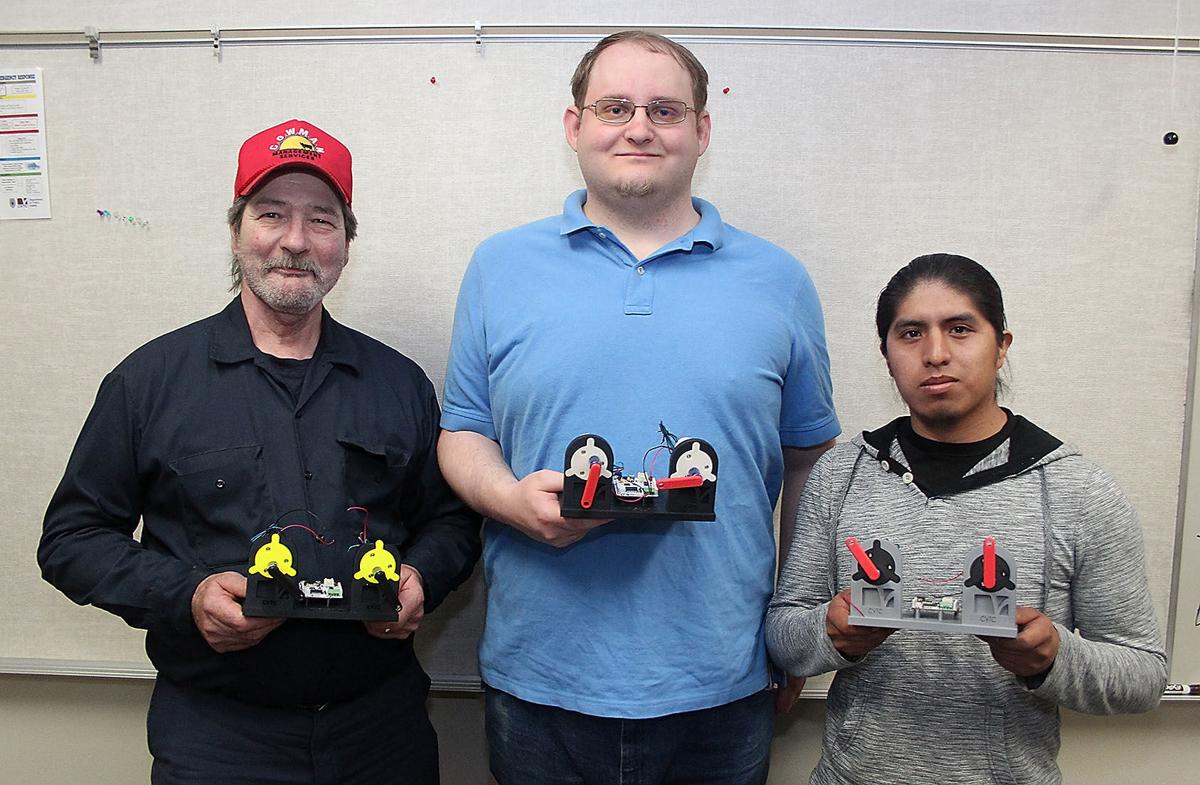 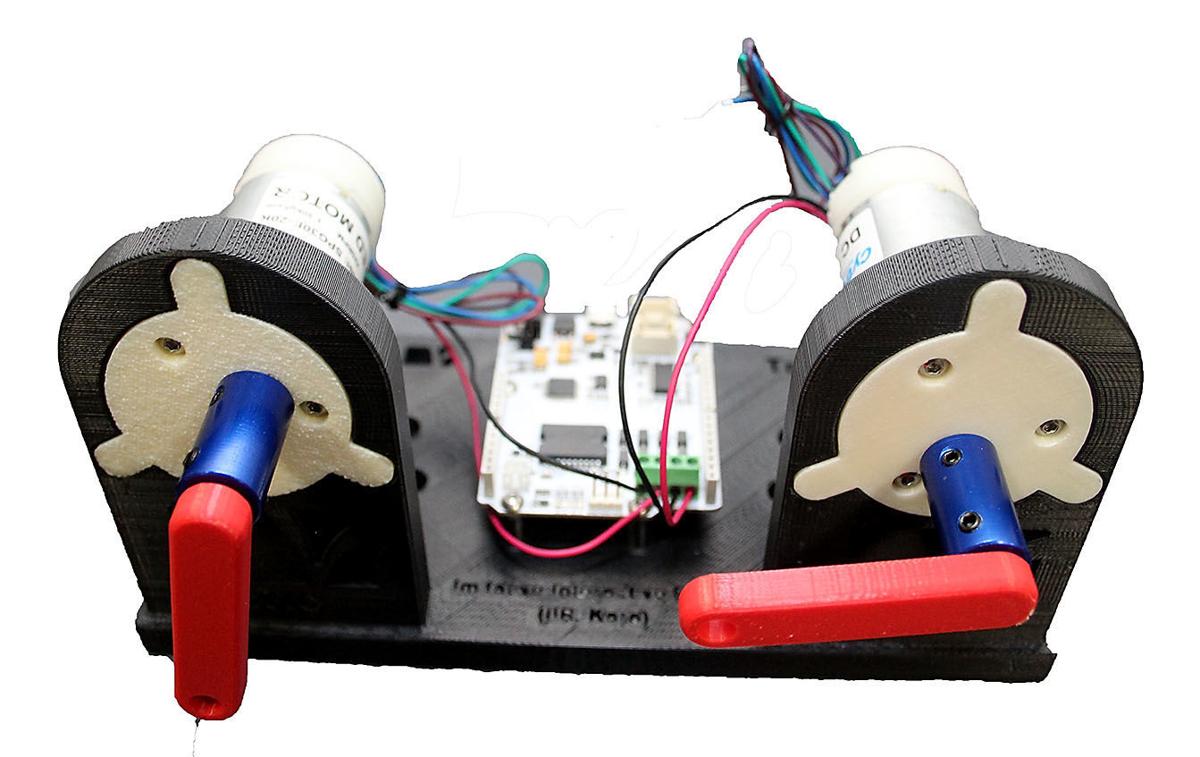 CVTC Mechanical Design students Alex Husfloen of Ellsworth, left, and Eric Wolle of Baldwin show the claw mechanism that earned them second place in the ATEA national design competition. Wolle is holding part of what would be a mechanical arm and showing how a small electric motor fits inside.

Chippewa Valley Technical College students swept the top two spots in a new nationwide design competition focused on the use of digital tools in industry.

One group’s design of what they called a Kara Learning Robot that demonstrates how robotic mechanisms learn from each other placed first in the American Technical Education Association 3D Futures Competition. A second group’s design of a robotic arm and gripper placed second in the competition.

Both groups of students are enrolled in the Mechanical Design program at CVTC’s River Falls campus.

“The groups worked on two different program projects,” said instructor Mahmood Lahroodi. “They were learning mechanical design concepts through project-based learning and had a chance to learn and enter the competition at the same time,”

The team of first-year Mechanical Design students on the Kara Learning Robot team included Jon Knapp of River Falls, Rick Hever of Hager City and Franklin Lozano of Baldwin. The second-year students on the mechanical arm and gripper team included Eric Wolle of Baldwin and Alex Husfloen of Ellsworth. Andrew Boster was a member of both teams, creating the three-minute explanatory videos that constituted the actual entries in the competition. The teams won prizes of $1,500 for first place and $1,000 for second place.

Lahroodi suggested the learning robot project for the first team.

“One tool that hasn’t seen much use yet in technical colleges and universities is machine learning,” Boster said in introducing the winning video. “Machine learning has had great success in the field of image and language processing. Our goal is to apply the same ideas to problems of force and motion in mechanical systems.”

The students designed Kara to turn a simple crank in a variety of rhythms, with a second unit learning the patterns from the first. They then added more units to form what they called a “Kara Swarm.”

“One thing of importance to machine learning is the ability to share information just as we human beings do,” Knapp said. “The Internet of Things is a rapidly rising concept of machine communication — the idea that your smart devices are all connected and can share information. With Kara we applied the concepts of IOT technology.”

Kara uses two motors and an Arduino board, a kind of open-sourced circuit board, to execute the code of a machine learning algorithm. Using the Arduino board, both motors are able to learn from one another as their motions become synchronized.

Besides the electronic components and programming, the students also had to design and build the physical housings that enabled them to assemble the device. Essential to success in the contest was use of digital tools. The team noted the importance of Solid Works software, 3D printers and Google Drive.

The robotic arm and gripper project came from a request by CVTC’s Automation Engineering Technology program which uses an automated system designed to move small plastic bottles. The gripper they were using wasn’t consistent in holding the bottles.

Husfloen was working on that problem even before the ATEA competition was announced, while Wolle was working on a mechanical arm. They combined the projects into one.

“The projects were something we were building for the class, but the contest gave us a way to apply it,” Wolle said.

“Our task was to create a gripper that has the ability to pick up multiple objects of various sizes, shapes, textures and hardness,” Husfloen said. “I wanted something where the fingers could be changed out depending on what you wanted to pick up.”

“Our manipulator arm is built to be both compact and modular,” Wolle said. “It gives us the ability to have multiple configurations and have an appealing look. The arm houses a small DC motor which creates side-to-side movement. The modular portions are critical, giving the arm the ability to be both portable and adaptive.”

Wolle and Husfloen decided on magnetic connections for the modular components, an idea the Kara team found useful.

“The fun thing about the project and getting second place is that we didn’t design all of this for a contest,” Wolle said. “It’s stuff we were using in class, and we’re still working on it.”

The competition was sponsored by Dassault Systemes, a French 3D design and engineering software company that developed the SolidWorks program. Judging was by a panel of industry experts. The winning teams are invited to the ATEA national conference April 3-5 in Indianapolis.