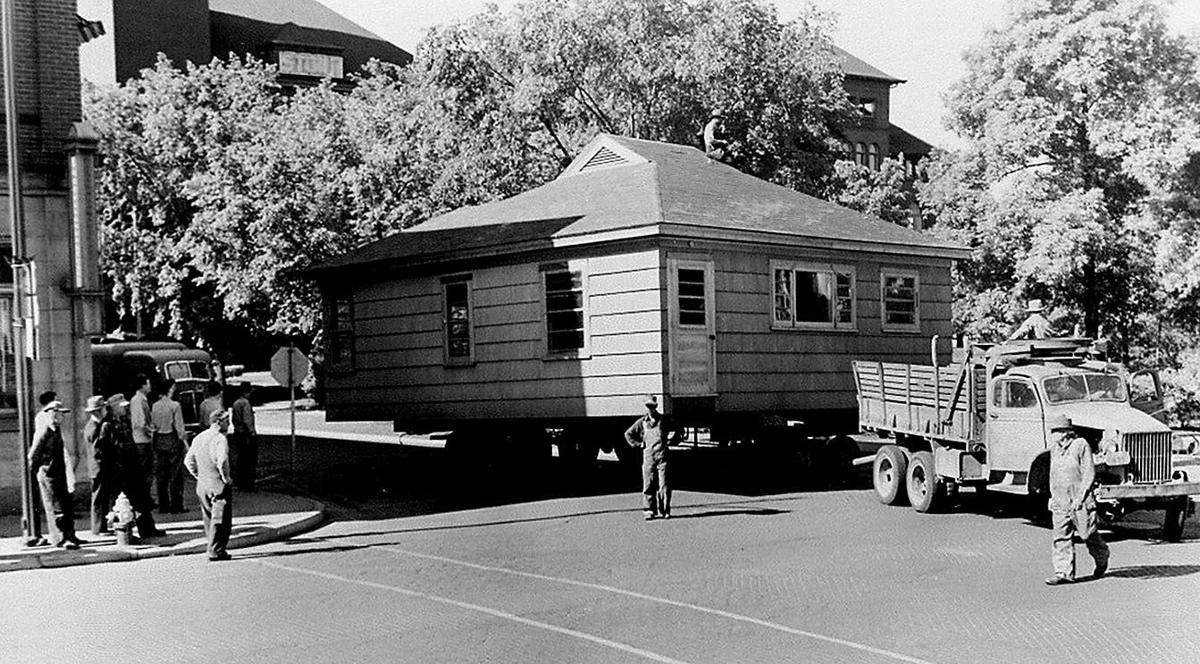 UW-Stout students built many homes in the former Ray Hall building on campus and then had them moved to their permanent sites. 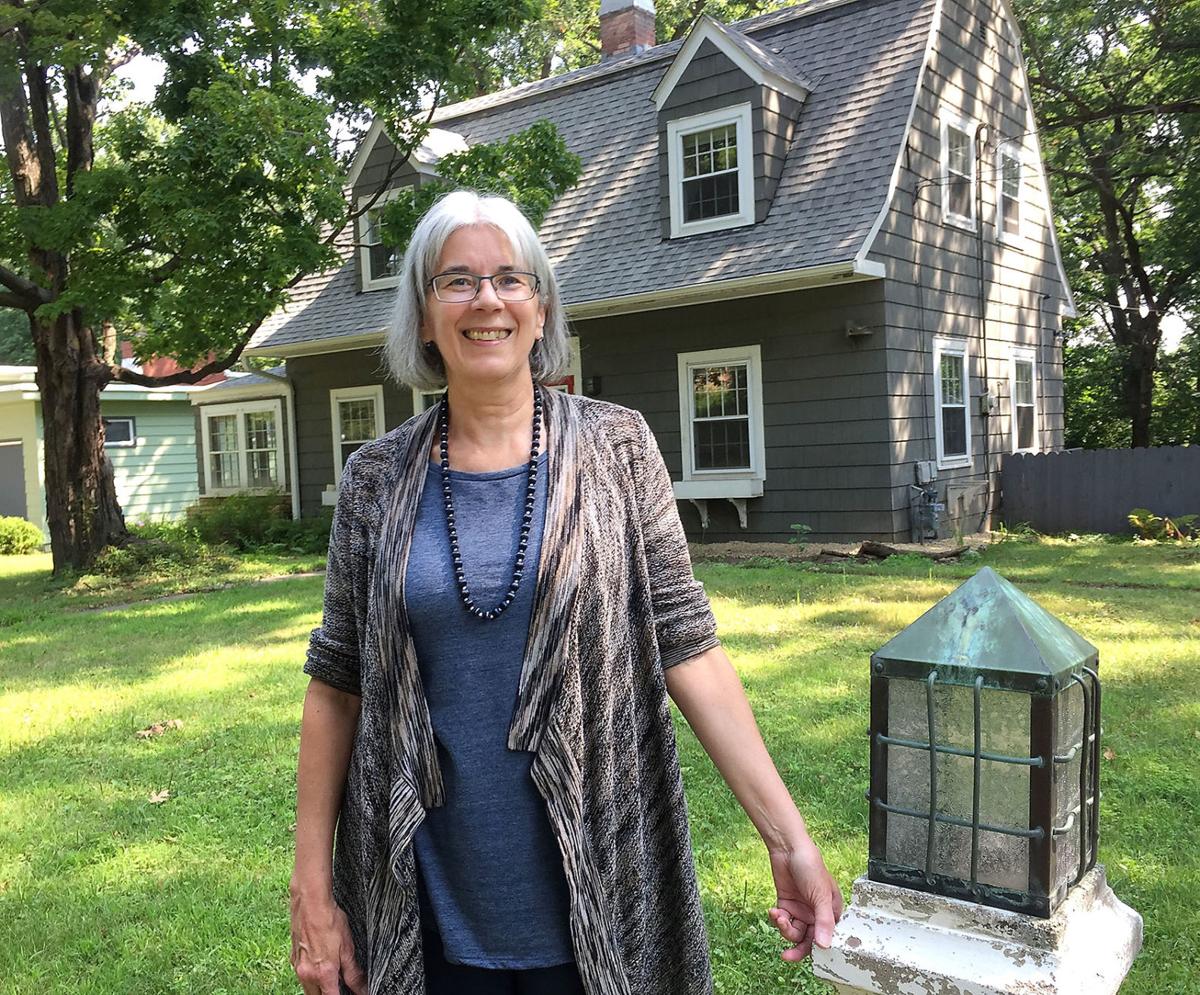 Joan Pougiales, a retired UW-Stout English as a second language director and faculty member, lives in a house built by Stout Institute students around 1929. 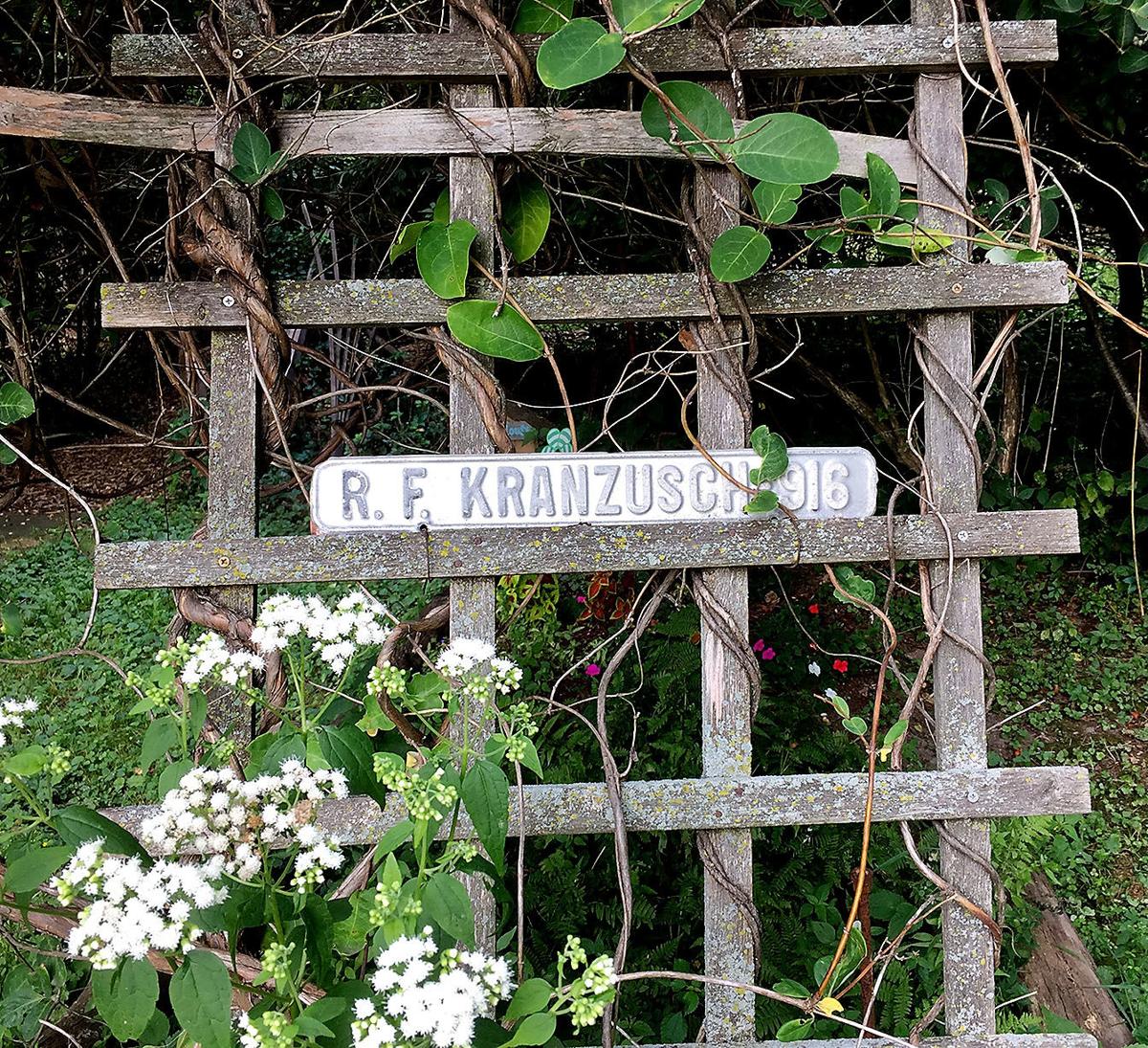 Near Pougiales’ home is the original mailbox named for the first homeowner Ray Kranzusch, who taught at UW-Stout.

UW-Stout students built many homes in the former Ray Hall building on campus and then had them moved to their permanent sites.

Joan Pougiales, a retired UW-Stout English as a second language director and faculty member, lives in a house built by Stout Institute students around 1929.

Near Pougiales’ home is the original mailbox named for the first homeowner Ray Kranzusch, who taught at UW-Stout.

Pougiales, a retired UW-Stout English as a second language director and faculty member, has lived in her house in the 900 block of Fifteenth Street Southeast for the past year. She had no idea when she first looked at the house that it was built by students back around 1929.

“I thought it was cool it was made by students, but it wasn’t a factor in my buying decision,” Pougiales said. “I love old houses. My favorite thing about it is the location. I feel like I’m in the country and I am one mile from UW-Stout. It’s a perfect location. There is just a good feeling in the house. I feel like it is really solid. It’s been maintained and not had a lot of updates. I think people have loved it.”

University students constructed houses from about 1915-16 until the early 1950s as part of the curriculum of the industrial arts program that included woodworking, construction and sheet metal work, according to UW-Stout archivist Heather Stecklein.

Houses built by university students recently were identified when Menomonie’s Historic Preservation Commission received a grant from the Wisconsin Historical Society to update a survey done in the 1980s of historical buildings.

So far about a half-dozen homes have been identified as being built by students, including Pougiales’ home, said Traci Schnell, a senior architectural historian for Heritage Research in Menomonee Falls, the company updating the survey.

Schnell learned about the homes and started looking into them. A historic photograph of a home in the 300 block of 11th Street East. shows the structure coming out of Ray Hall. It was built in the hall by students and moved to the site for the physical education professor George Miller.

“It is absolutely unique to have houses built by students,” Schnell said. “It makes sense with the coursework going on.”

Schnell presented the survey at the Historic Preservation Commission on Monday.

Those who know of other historic homes built by university students are urged to contact university archives. Pictures and location information is particularly important because it would allow others to research the homes, Stecklein said.

Ray Hall, just south of Bowman Hall on the Second Street Corridor, was built in 1913. Some of the structures were built in Ray Hall and moved on site, while others were built right on the property.

“It seems to be the houses that Stout students built were in particular additions,” Stecklein said. “When they were built they often ended up being residences for faculty members.”

At first students built smaller items such as chicken coops and sheds and then expanded to garages and houses, Stecklein said. Ray Hall was razed in 1996 as part of the Historic Second Street Corridor project.

Stecklein believes students typically built one or two houses a year. She estimates 35 to 40 houses in Menomonie were constructed by students.

“It kind of varied,” she said. “One year they may have decided to do a garage or rehabilitate a house on site.”

Construction would have been done by upper-level students. After helping build a house, students would be able to supervise construction and teach high school students, which is what many of them did, Stecklein said.

Around 1953 seems to be when the last home was constructed.

“It probably fell out of vogue, Stecklein said. “Modular homes started to rise up.”

Yet there is historical value for the city and university to find those homes, Stecklein said.

“I think the value is understanding the application of Stout students’ work,” Stecklein said. “Teaching particular skills is who we are. We’re about a high-quality education and hands-on learning. Stout and the larger community have a long-standing relationship. The community has a lot to do with who we are and what we are doing.”

Pougiales’ Dutch colonial-style home was built by students for faculty member Ray F. Kranzusch, who taught radio, electrical work, auto mechanics and general shop at UW-Stout. He is represented by the K in the CKTO residence hall on campus.

Kranzusch was a graduate of Stout Institute and started working at the university around 1925, retiring in 1964, although he may have continued teaching for another decade. He is credited with creating the first driver’s education program at the university.

Pougiales said her home is in great shape with few cracks in the ceiling plaster and no wood floors showing any sag after all these years. The home has only had three previous owners.

“There is not just a wall around the perimeter of the house in the basement; there are interior walls in the basement that are obviously weight bearing,” she said. “There are things they obviously did because they were teaching the students, and they were trying to teach them right. An electrician came to look at the place and was blown away that all the wiring was in conduit that we could see in the basement.”

Pougiales has nicknamed the house Amelia. “It is very old fashioned and simple and not extravagant or showy,” she said.

Some light fixtures are believed to be original, including two near the driveway. In a field area near the home, a metal plate has Kranzusch’s name, believed to be from his mailbox.

“It’s great to know these student projects and work are out there,” Stecklein said. “There is a quality of work there because these structures are still standing 60 years later.”