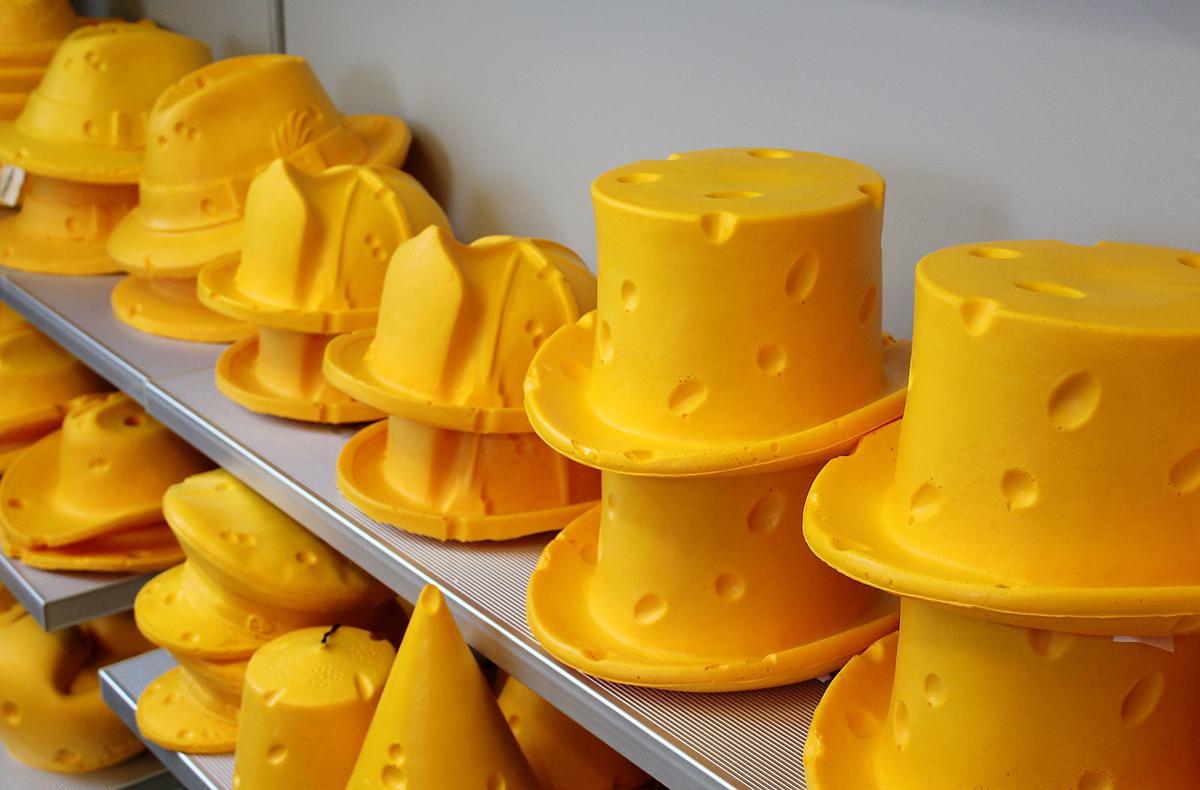 Tours are available of the Walker’s Point factory in Milwaukee where Cheesehead hats and other merchandise is made. 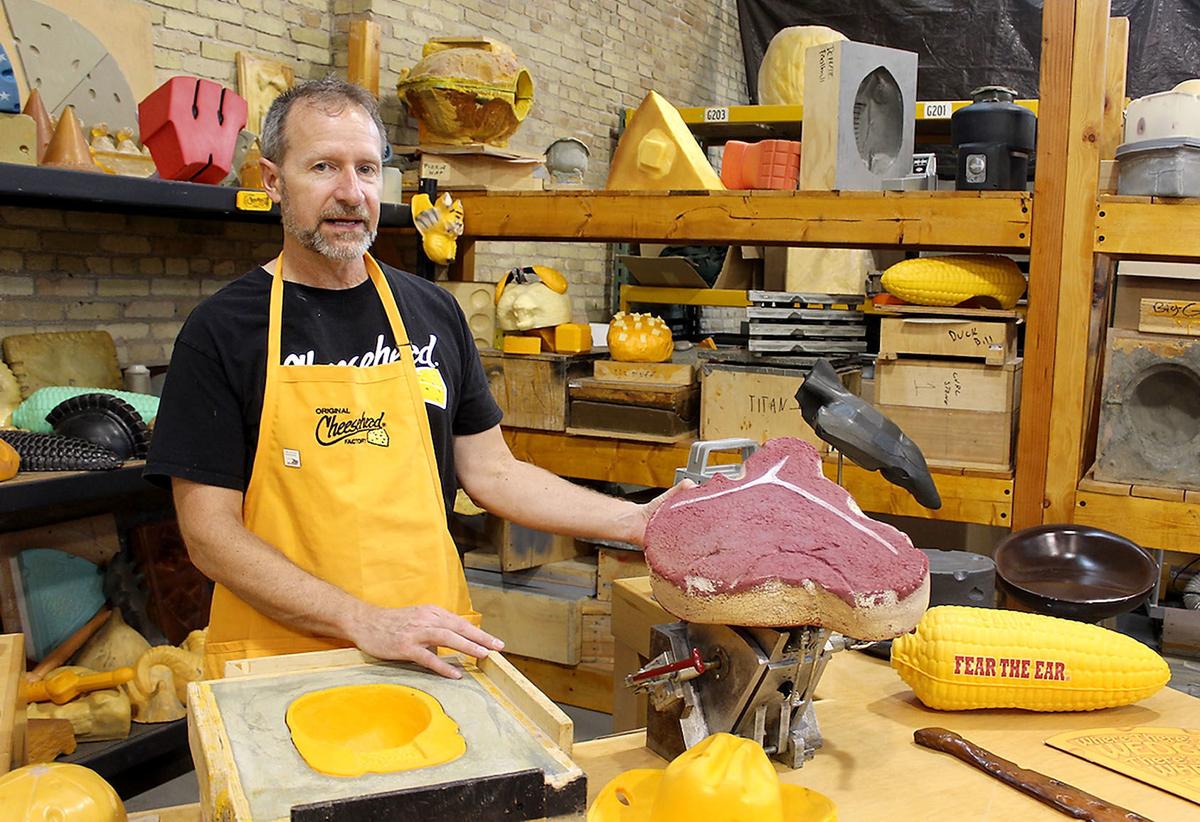 Mark Ertl takes a break from Cheesehead production work to give a tour. 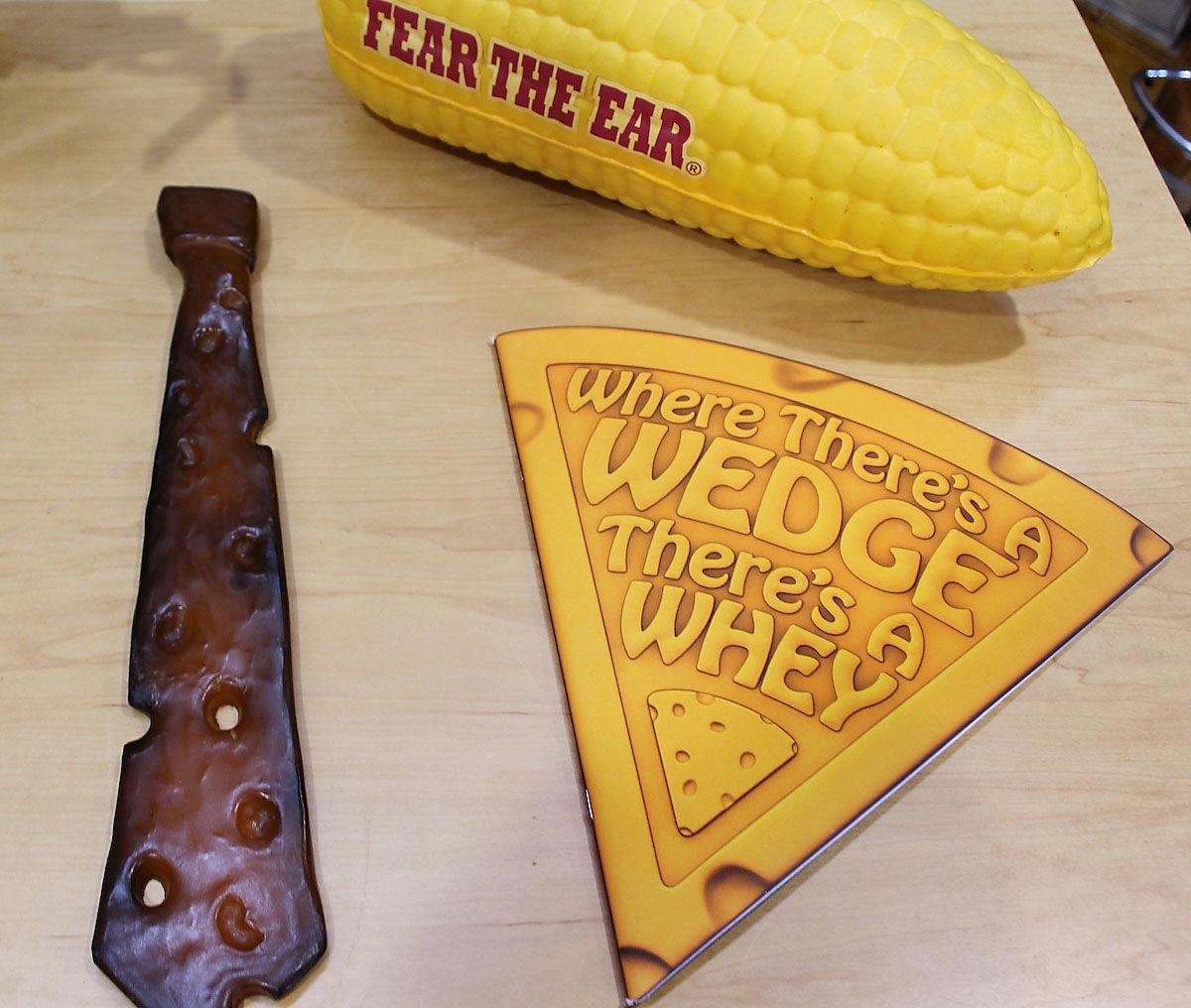 Tours are available of the Walker’s Point factory in Milwaukee where Cheesehead hats and other merchandise is made.

Mark Ertl takes a break from Cheesehead production work to give a tour.

Word of the day is “schmivitz,” and there is no dictionary definition. Yet.

The term comes from the same guy who cut couch cushion foam into a triangle, blow torched holes into it, painted it yellow and wore it to a Milwaukee Brewers game in 1987.

His mother probably was not all that surprised. Son Ralph Bruno was the kind of child whom babysitters were advised to watch closely, so he wouldn’t take apart a toaster or rocking horse out of curiosity or boredom.

Bruno’s burst of brazen creativity in 1987 turned into a meaningful moment in Wisconsin history.

The head topper and people who wore them became widely known as Cheeseheads.

Whether the moniker is endearing or insulting depends on who does the talking.

Even the Oxford dictionary recognizes “cheesehead” as an informal reference to “a resident of Wisconsin, especially a fan of the Green Bay Packers football team.”

The second definition is “a blockhead; an idiot.”

The attire is a mark of indigenous culture, and Bruno gets credit for that.

Today he operates a Milwaukee factory, gift shop and soon-to-come event space where a growing line of Cheesehead merchandise is made.

“Schmivitz” is the trademark for the color and hole pattern in the product line at Bruno’s Foamation Inc., where Cheesehead earrings, coasters, baby bibs, bow ties and much more are for sale there and online.

Or the growing line of non-foam souvenirs, which include Cheesehead-topped gnomes and totems.

Tours at the Walker’s Point factory began two years ago, and Bruno says a majority of visitors are out-of-staters. They see how Cheeseheads are made and have the option to make their own souvenir.

“We’ve been the ‘mystery stop’ for bus tours,” Bruno offers.

It all happens in a century-old building that opened as a junk repository with eight furnaces to melt metal.

The site had other purposes too, before morphing into a small-batch brewery before it became Foamation.

“We’re kind of like a brewery,” Bruno rationalizes. “We create foam, give tours, have a mix of manufacturing and retail space.”

His business partner, Mei-Lynn Nelson, says the building’s industrial shell is positioned to add a catering kitchen, bar and event space for up to 350 guests.

Prospective customers can simply enjoy the funky ambiance or turn an event into an educational, hands-on experience and go home with a souvenir.

Tours are led by employees who take a break from their Cheesehead production work. That includes Mark Ertl, the company’s unofficial historian.

Ertl says nine Milwaukee fires, including one in this warehouse, happened on the same day in 1918. The business, Progressive Metal and Refining, went bankrupt two years later.

He explains the significance of the building’s exterior, a mix of cream city brick, red brick and a calico patchwork.

He demonstrates the magic of turning yellow-orange liquid to turn into a foamy hat. It only takes four of five minutes to set, he says, and then “each piece gets a little hug as it comes out of the mold.”

Bruno is referred to as the big cheese who doesn’t act like one.

Seeing the unexpected is a part of the fun during a Cheesehead factory tour.

The Montgomery Biscuits, a minor league baseball team, got a hat designed here. So did a hat for Buffalo Bills fans that resembles a chicken wing (or an alligator without eyes).

Look for hats shaped like a T-bone steak, a deflated football or upside-down ice cream cone too.

Customers for the latter, Ertl says, include the comic songwriter-singer “Weird Al “Yankovic.

Tours run hourly and start at $15 for a 30-minute, behind-the-scenes look, and $25 to add time to create your own Cheesehead hat or other souvenir. Check online for availability.