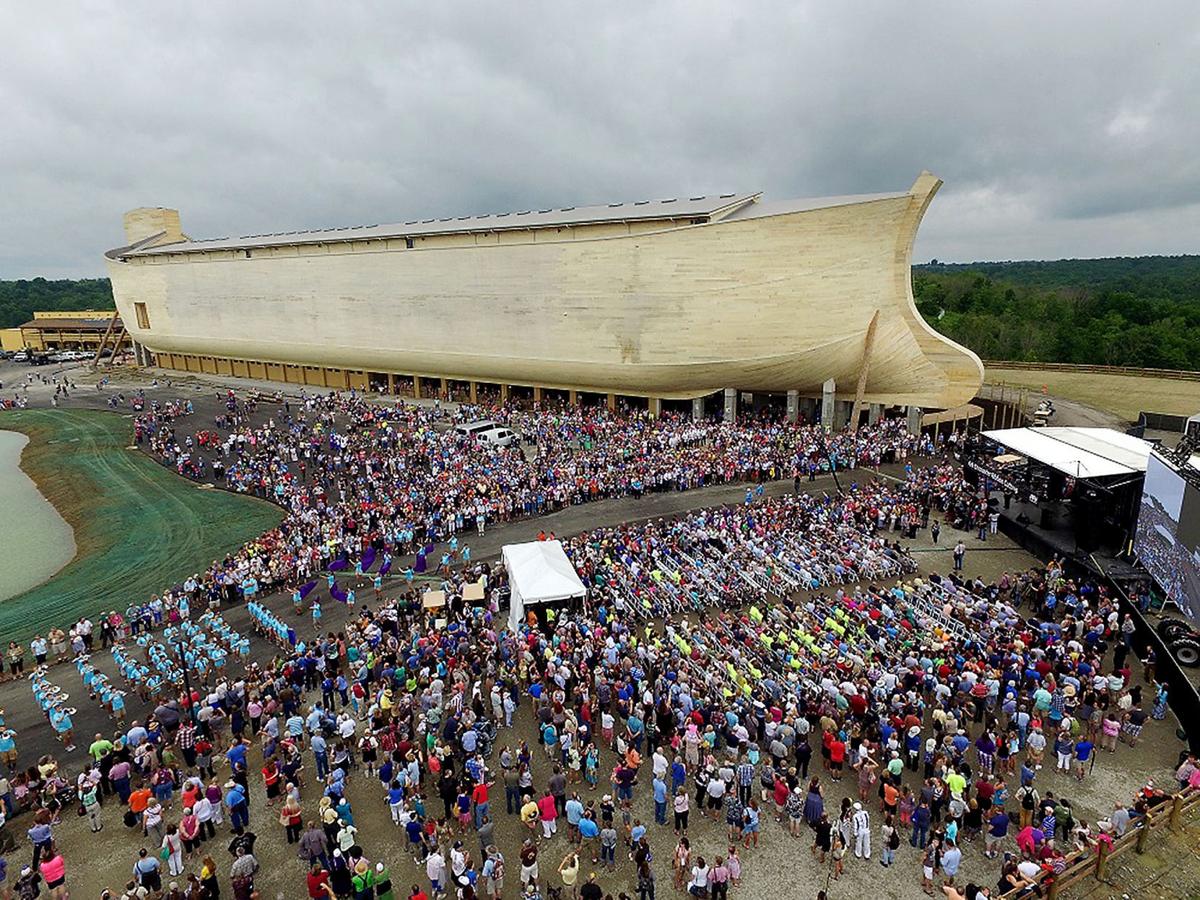 Ark Encounter in Williamstown, Ky., does a fine job of maintaining its motif across its three floors of displays — and yes, it really does look like an ark inside. 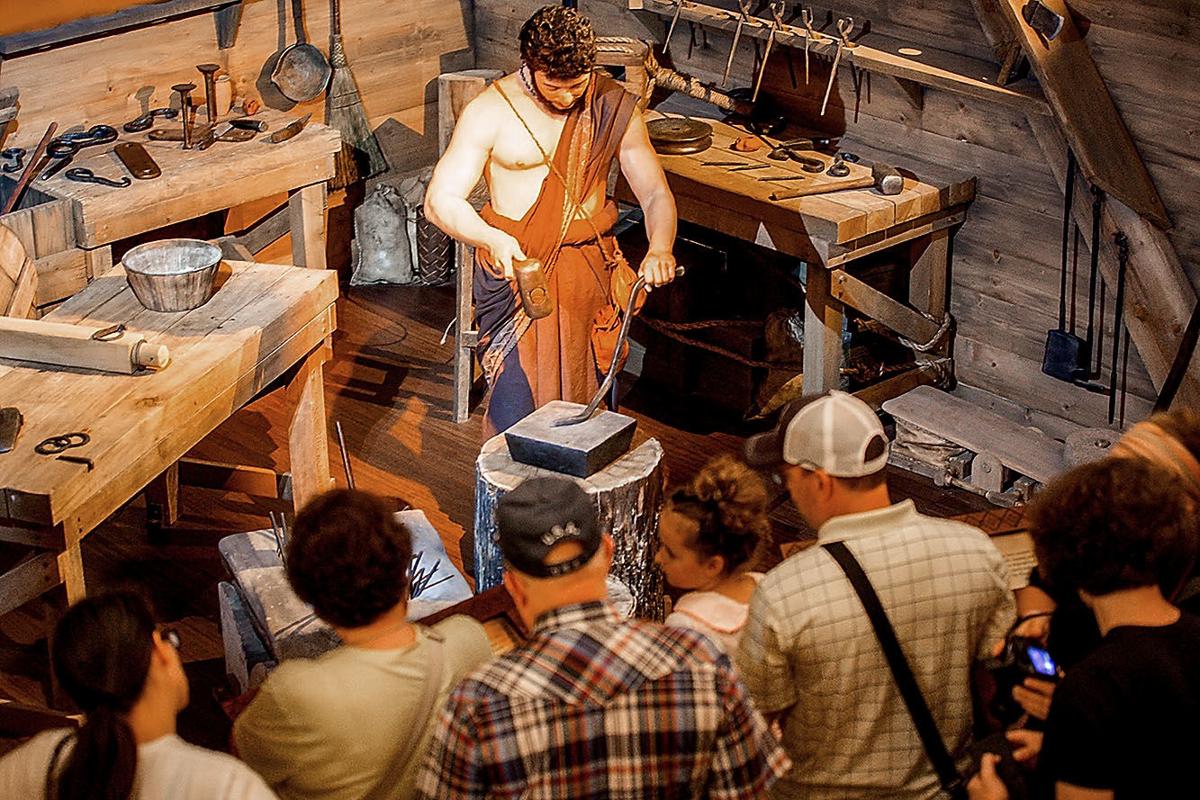 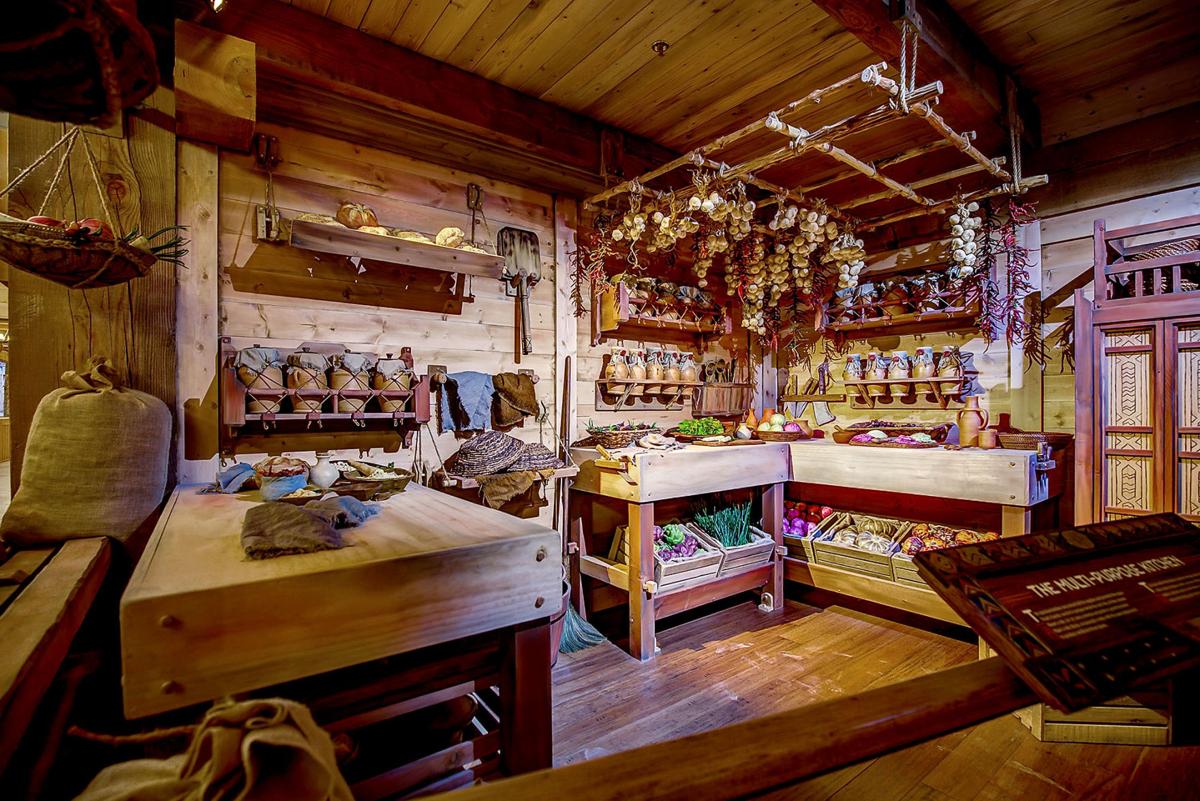 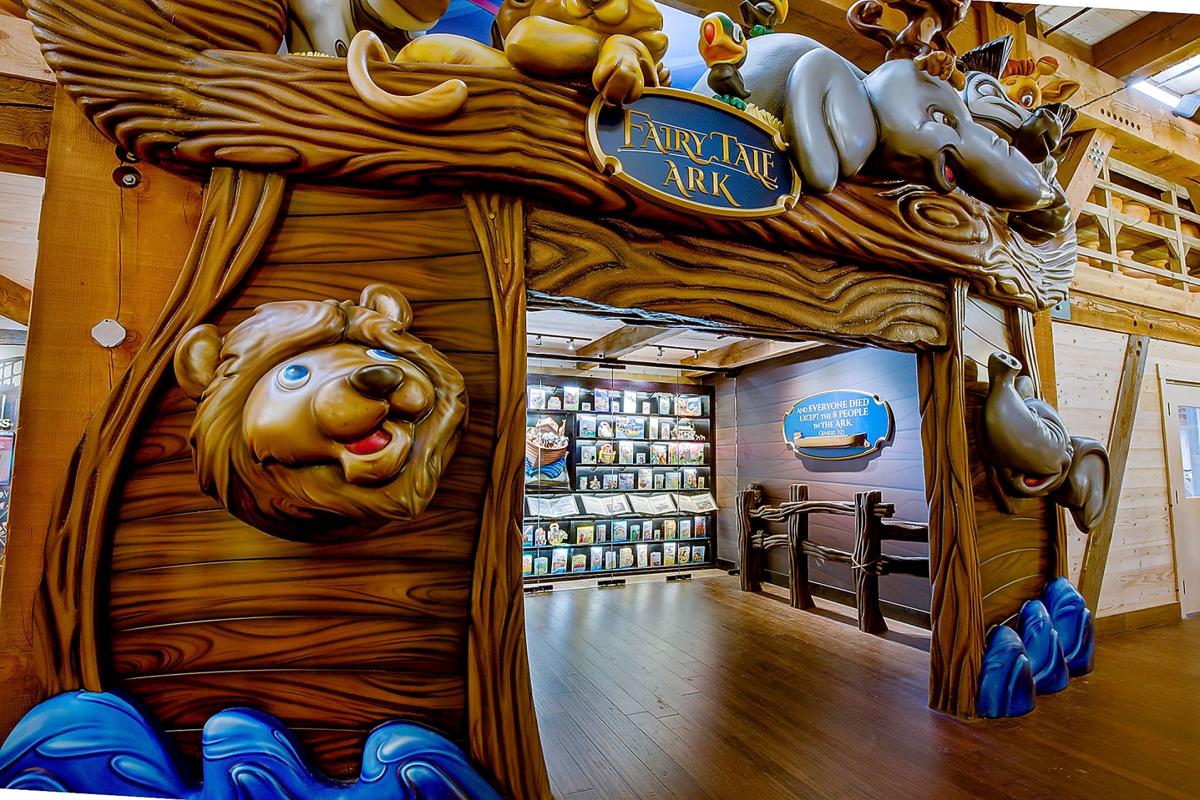 Ark Encounter in Williamstown, Ky., does a fine job of maintaining its motif across its three floors of displays -- and the gift shop. (Courtesy of Answers in Genesis/TNS)

Ark Encounter in Williamstown, Ky., does a fine job of maintaining its motif across its three floors of displays — and yes, it really does look like an ark inside.

Ark Encounter in Williamstown, Ky., does a fine job of maintaining its motif across its three floors of displays -- and the gift shop. (Courtesy of Answers in Genesis/TNS)

WILLIAMSTOWN, Ky. — I’d been on Noah’s Ark all of 20 minutes when the question that hung over every step was finally put to me: “Do you believe?”

It came from a man with a thin beard named Travis, who wore a Captain America T-shirt and had an excitable look in his eye. He was touring the new, five-story Ark Encounter with his wife and daughters after driving three hours from central Indiana.

We stood on the ark’s second floor, in front of a display about the Garden of Eden, and Travis had just explained to one of his girls that some people believe the fabled garden still exists somewhere on the planet.

Maybe it’s in the Bermuda Triangle, he said. Or near the Euphrates River. Otherwise, it might be suspended somewhere between heaven and Earth.

He spoke with such certainty that I interrupted, asking if I’d heard right. Travis said yes and repeated the story. Then he asked, right there, in front of his girls and Adam and Eve: Do I believe?

Travis meant the question in the big way and the little.

I offered the most honest, least alienating answer I could: I don’t quite believe. But I don’t exactly not believe.

I was glad he’d asked, because I’d wondered the exact same thing about nearly everyone at the 510-foot-long, 51-foot-high, $100 million replica of Noah’s Ark that opened in a rolling Kentucky field in early July.

There was the family of five from Columbus, Ohio, in the parking lot, munching snacks in their van after four hours on the ark.

After eating, they planned to return for another two or three hours. There were the women leaving the ark as I prepared to board, stuffed bags from the gift shop dangling from their hands.

Would I? My skepticism about Noah’s Ark as anything more than a fable for 5-year-olds made me wonder. It also made me wonder if the ark resonated with these people precisely because they did believe that God flooded the world out of wrath after telling Noah to, well, you know the story.

Travis seemed satisfied with my answer and told me that he hadn’t heard the voice of God, but that he’d felt it. One of his daughters begged him to keep moving, but he continued that he was violently mugged at 19, was once suicidal to the point of cradling a pistol in his hands on his front porch and unknowingly drove for a week with an owl lodged in the bumper of his truck, which he believed was a sign from above.

It was a flurry of talk, and Travis finished by saying, “If you want to know if God is real, ask him.”

Instead, I spent the next several hours wandering Ark Encounter, and the takeaway was simple: You don’t need to believe to enjoy it. A (supposed) life-size replica of Noah’s Ark in an undulating Kentucky field is an undeniable spectacle, and it must be seen to be believed.

Ark Encounter opened to great fanfare, curiosity and protests. It was built by Answers in Genesis, which describes itself as an “apologetics ministry, dedicated to enabling Christians to defend their faith and to proclaim the gospel of Jesus Christ effectively.” It also believes that Earth is 6,000 years old and that Adam and Eve co-existed with dinosaurs.

Even if you raise an eyebrow at the thought of humans and dinosaurs sharing real estate — plus that thing about a 6,000-year-old Earth — the ark is a clean and welcoming space that’s a marvel of design. It’s clearly profoundly meaningful to those who “believe,” as Travis put it, but to those of us a little less certain, it can be a fun way to pass a few hours.

The ark does a fine job of maintaining its motif across its three floors of displays. Yes, it really does look like an ark in there.

When Ark Encounter is just a life-size replica of that fable for 5-year-olds, it’s fun. The first steps inside immerse a visitor in the entire premise: Rows of bamboo cages emit chirps, squawks and murmurs from across the animal kingdom, mixed with a recording of the low crash of waves.

But at other turns, Ark Encounter takes itself too seriously. Soon after that sense of being on an ark full of animals in a flooded world, we reach cages of life-size beasts. The first is a black bear beside the words, “How did Noah keep the polar bears cool?”

The answer: “Skeptics often mock the concept of the Ark and its animals, so they develop questions designed to make the Ark look foolish. However, when one thinks about the Ark from a biblical perspective, the skeptics’ questions end up looking foolish. … We know that polar bears can produce offspring with grizzlies and other brown bears, and brown bears can interbreed with black bears. Thus, the various bears of the world belong to the same kind. The two bears on the Ark were the ancestors of the many bears in the world today, including polar bears.”

Everyone gets to believe and support what they want here in America. But, as a visitor, I have a difficult time bankrolling such nonscience, especially considering the price: $40 per adult ($75 for two days), plus a surprise $10 parking fee that didn’t seem all that Christian in the middle of a Kentucky field with endless parking.

The opportunities to spend money on the ark are plentiful, with one restaurant, another on the way, the gift shop, a not-so-subtle push toward a visit to the ark’s sister attraction — the Creation Museum, roughly 40 miles north — and a zip line that costs $59. There’s also a snack kiosk where Gatorade, bottled Starbucks drinks, pretzels and chips are sold.

The ark amounts to a hit-and-miss array of exhibits and experiences, sometimes with a surprising undercurrent of anger and darkness. The world’s first 1,650 years are told mostly in poster board displays: the Garden of Eden, humanity’s fall from grace and then some stuff about how humans are “corrupt” and “wicked” and “vile.”

Even children’s books are in the crosshairs, with a display dedicated to the “deception” in such books: “Fairy tale ark stories often focus on cute animals on a fun boat ride. But the Flood account is about the righteous and holy God judging an exceedingly sinful world with a cataclysmic Flood while showing mercy to Noah’s family and the animals.”

Most stirring were the explanations of how the ark would have functioned.

Ark Encounter gives us answers in poster and video form, and they involve intricate systems that seem plausible enough.

Ark Encounter (arkencounter.com) is in Williamstown, Ky., about 40 miles south of Cincinnati.

Note that the closest hotels have been selling out since Ark Encounter opened in July, so reservations are a good idea.