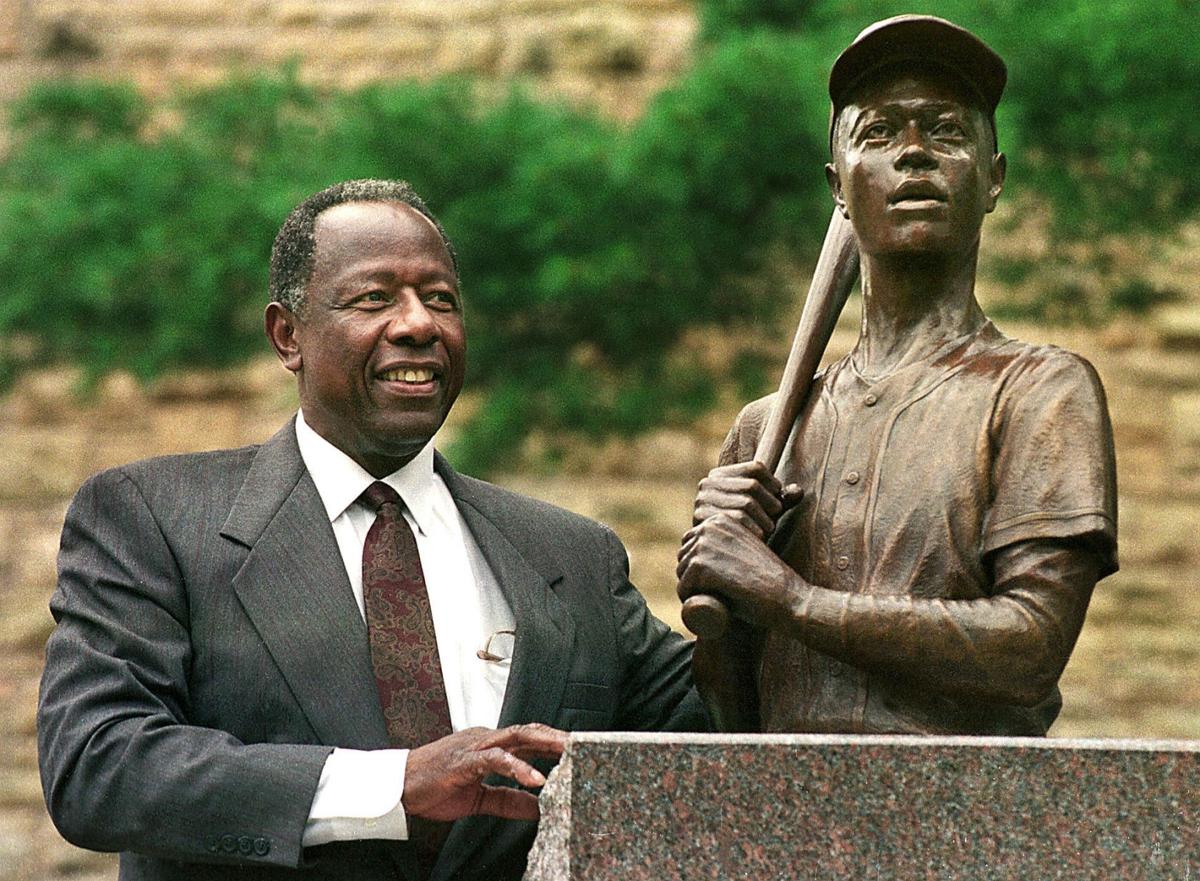 Hank Aaron stands by his statue in Carson Park during a dedication ceremony in August 1994. 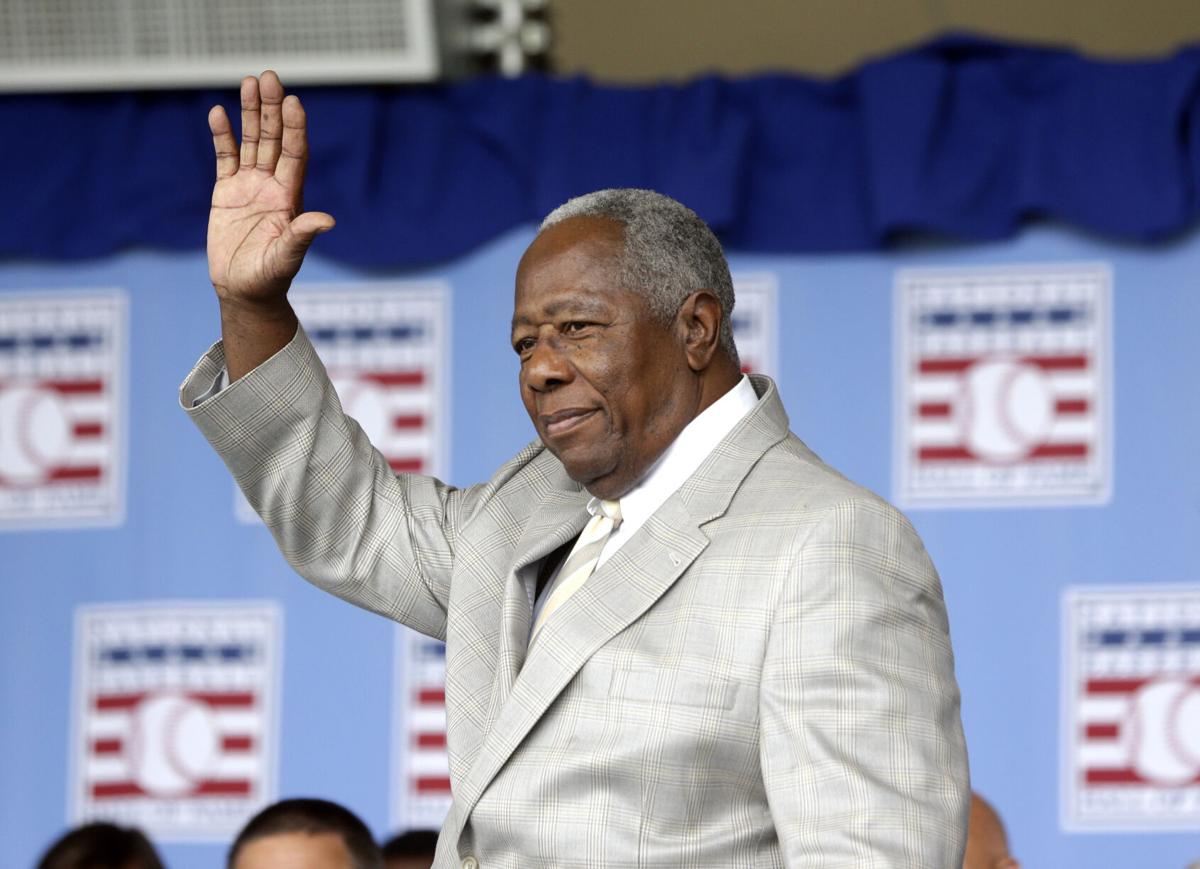 FILE - Hall of Famer Hank Aaron waves to the crowd during Baseball Hall of Fame induction ceremonies in Cooperstown, N.Y., in this Sunday, July 28, 2013, file photo. Hank Aaron, who endured racist threats with stoic dignity during his pursuit of Babe Ruth but went on to break the career home run record in the pre-steroids era, died early Friday, Jan. 22, 2021. He was 86. The Atlanta Braves said Aaron died peacefully in his sleep. No cause of death was given. (AP Photo/Mike Groll, File) 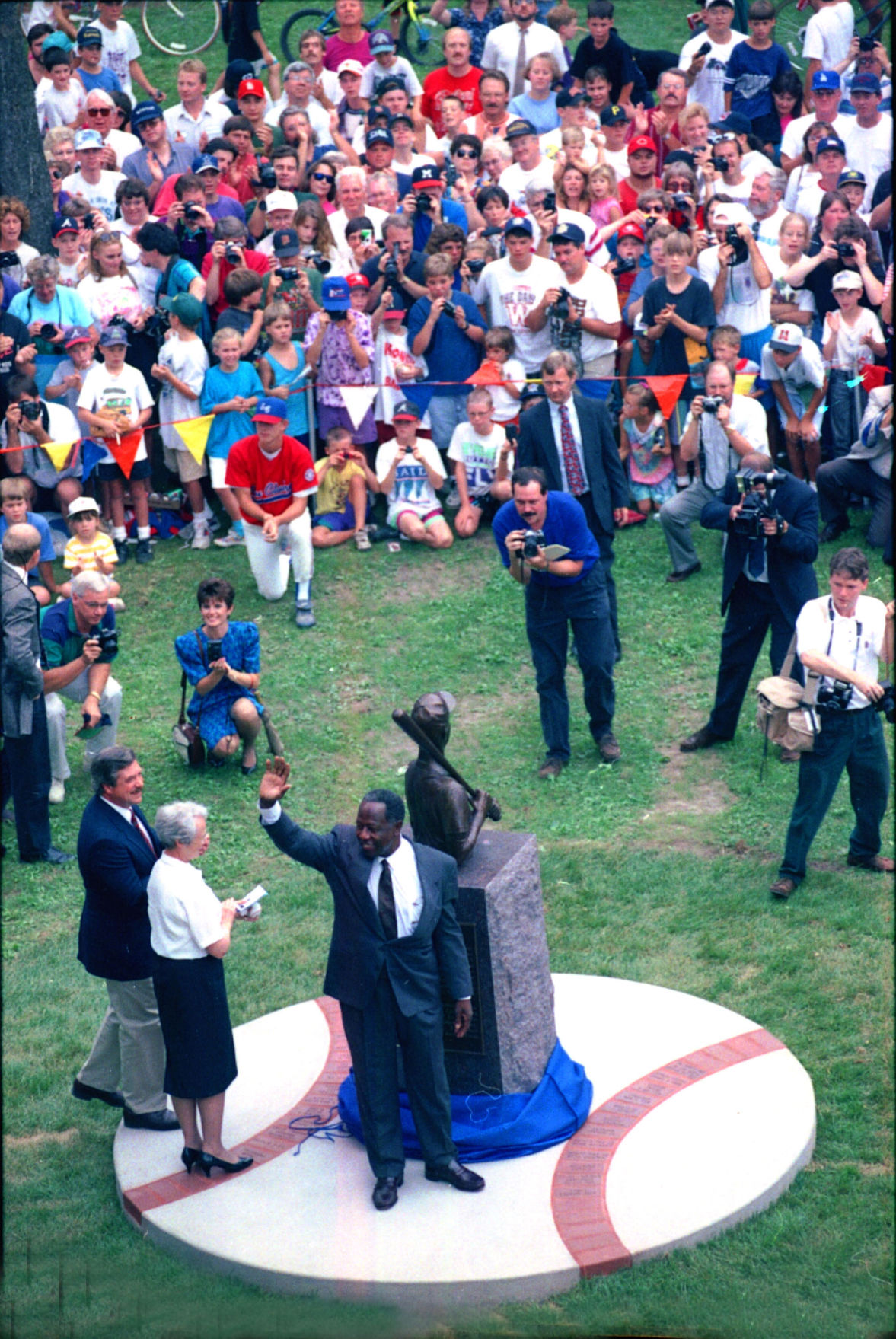 Hank Aaron and his statue in Carson Park dedication in August 1994. 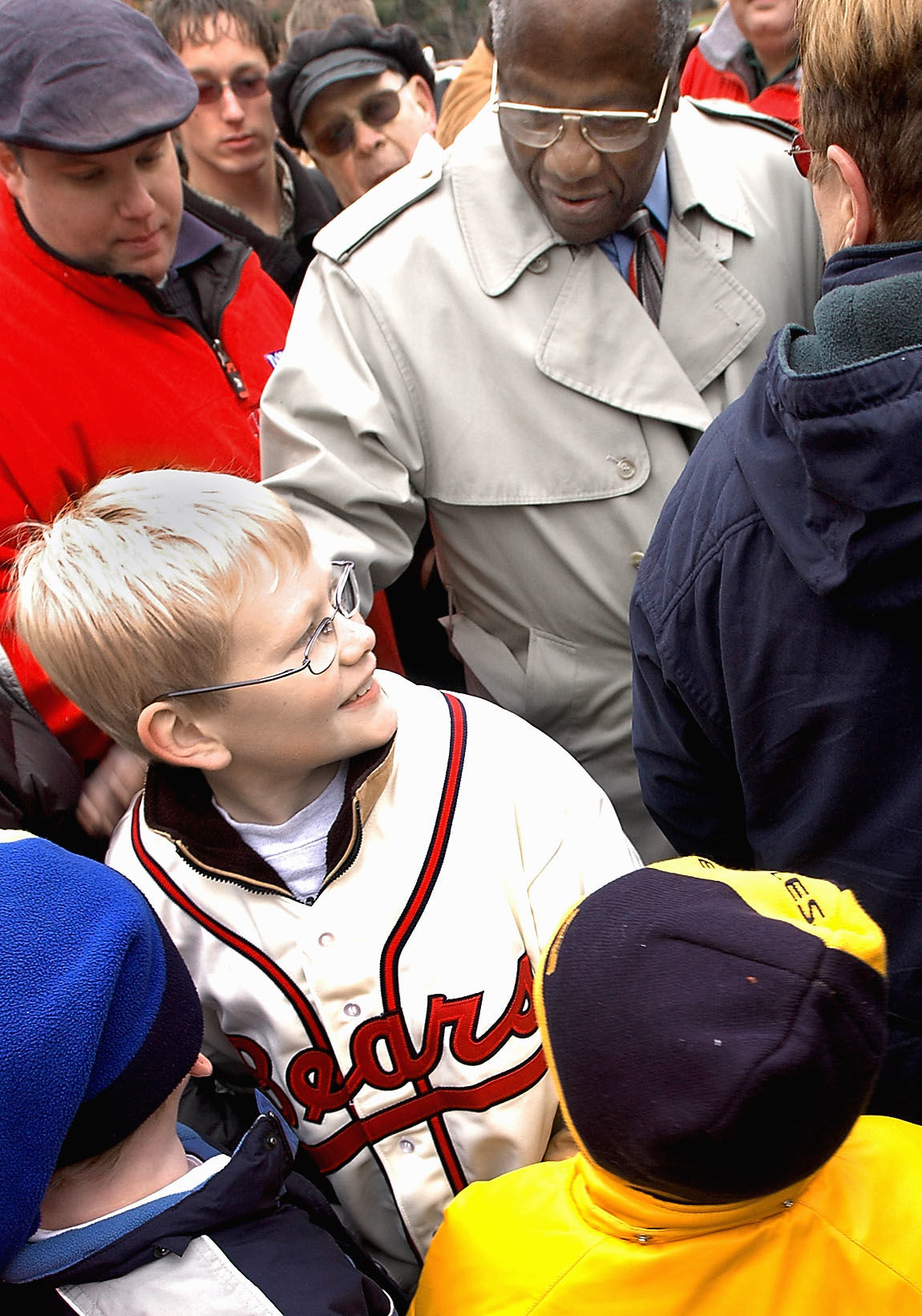 Baseball legend Hank Aaron looked at the #6 on the back of a replica of his Eau Claire Bears jersey worn by 10-year-old Matthew Lindblad of Eau Claire. Aaron was campaigning for Governor Jim Doyle at Carson Park in Eau Claire Thursday afternoon.

ATLANTA (AP) — Hank Aaron, who endured racist threats with stoic dignity during his pursuit of Babe Ruth's home run record and gracefully left his mark as one of baseball's greatest all-around players, died Friday. He was 86.

The Atlanta Braves, Aaron's longtime team, said he died peacefully in his sleep. No cause was given.

Aaron made his last public appearance just 2 1/2 weeks ago, when he received the COVID-19 vaccine. He said he wanted to help spread the to Black Americans that the vaccine was safe.

Aaron played part of his early career in Eau Claire, when he joined the Eau Claire Bears for the 1952 season. He won Rookie of the Year in the Northern League that season, hitting .336 with nine home runs.

"Hammerin' Hank" set a wide array of career hitting records during a 23-year career spent mostly with the Milwaukee and Atlanta Braves, including RBIs, extra-base hits and total bases.

But the Hall of Famer will be remembered for one swing above all others, the one that made him baseball's home-run king.

It was a title he would be hold for more than 33 years, a period in which the Hammer slowly but surely claimed his rightful place as one of America's most iconic sporting figures, a true national treasure worthy of mention in the same breath with Ruth or Ali or Jordan.

Before a sellout crowd at Atlanta Stadium and a national television audience, Aaron broke Ruth's home run record with No. 715 off Al Downing of the Los Angeles Dodgers.

The Hall of Famer finished his career with 755, a total surpassed by Barry Bonds in 2007 — though many continued to call the Hammer the true home run king because of allegations that Bonds used performance-enhancing drugs.

Bonds finished his tarnished career with 762, though Aaron never begrudged someone eclipsing his mark.

His common refrain: More than three decades as the king was long enough. It was time for someone else to hold the record.

No one could take away his legacy.

"I just tried to play the game the way it was supposed to be played," Aaron said, summing it up better than anyone.

He wasn't on hand when Bonds hit No. 756, but he did tape a congratulatory message that was shown on the video board in San Francisco shortly after the new record-holder went deep. While saddened by claims of rampant steroid use in baseball in the late 1990s and early 2000s, Aaron never challenged those marks set by players who may have taken pharmaceutical short cuts.

Besides, he always had that April night in 1974.

A look at Hank Aaron's career and accomplishments

"Downing was more of a finesse pitcher," Aaron remembered shortly before the 30th anniversary of the landmark homer. "I guess he was trying to throw me a screwball or something. Whatever it was, I got enough of it."

Aaron's journey to that memorable homer was hardly pleasant. He was the target of extensive hate mail as he closed in on Ruth's cherished record of 714, much of it sparked by the fact Ruth was white and Aaron was black.

"If I was white, all America would be proud of me," Aaron said almost a year before he passed Ruth. "But I am black."

Aaron was shadowed constantly by bodyguards and forced to distance himself from teammates. He kept all those hateful letters, a bitter reminder of the abuse he endured and never forgot.

"It's very offensive," he once said. "They call me 'nigger' and every other bad word you can come up with. You can't ignore them. They are here. But this is just the way things are for black people in America. It's something you battle all of your life."

After retiring in 1976, Aaron became a revered, almost mythical figure, even though he never pursued the spotlight. He was thrilled when the U.S. elected its first African-American president, Barack Obama, in 2008. Former President Bill Clinton credited Aaron with helping carve a path of racial tolerance that made Obama's victory possible.

"We're a different country now," Clinton said at a 75th birthday celebration for Aaron. "You've given us far more than we'll ever give you."

Aaron spent 21 of his 23 seasons with the Braves, first in Milwaukee, then in Atlanta after the franchise moved to the Deep South in 1966. He finished his career back in Milwaukee, traded to the Brewers after the 1974 season when he refused to take a front-office job that would have required a big pay cut.

While knocking the ball over the fence became his signature accomplishment, the Hammer was hardly a one-dimensional star. In fact, he never hit more than 47 homers in a season (though he did have eight years with at least 40 dingers).

But it can be argued that no one was so good, for so long, at so many facets of the national pastime.

The long ball was only part of his arsenal.

Aaron was a true five-tool star.

He posted 14 seasons with a .300 average — the last of them at age 39 — and claimed two National League batting titles. He finished with a career average of .305.

Aaron also was a gifted outfielder with a powerful arm, something often overlooked because of a smooth, effortless stride that his critics — with undoubtedly racist overtones — mistook for nonchalance. He was a three-time Gold Glove winner.

Then there was his work on the base paths. Aaron posted seven seasons with more than 20 stolen bases, including a career-best of 31 in 1963 when became only the third member of the 30-30 club — players who have totaled at least 30 homers and 30 steals in a season.

Six-feet tall and listed at 180 pounds during the prime of his career, Aaron was hardly an imposing player physically. But he was blessed with powerful wrists that made him one of the game's most feared hitters.

Hall of Famer Mike Schmidt described Aaron as "an unassuming, easygoing man, a quiet superstar, that a '70s player like me emulated."

"He was one of my heroes as a kid, and will always be an icon of the baby boomer generation," Schmidt said. "In fact, if you weigh all the elements involved and compare the game fairly, his career will never be topped."

Aaron hit 733 homers with the Braves, the last in his final plate appearance with the team, a liner down the left field line off Cincinnati's Rawley Eastwick on Oct. 2, 1974. Exactly one month later, he was dealt to the Brewers for outfielder Dave May and minor league pitcher Roger Alexander.

The Braves made it clear they no longer wanted Aaron, then 40, returning for another season on the field. They offered him a front office job for $50,000 a year, about $150,000 less than his playing salary.

Aaron became a designated hitter with the Brewers, but hardly closed his career with a flourish. He managed just 22 homers over his last two seasons, going out with a .229 average in 1976.

Even so, his career numbers largely stood the test of time.

"I feel like that home run I hit is just part of what my story is all about," Aaron said.

While Aaron hit at least 20 homers in 20 consecutive seasons, he was hardly swinging for the fences. He just happened to hit a lot of balls that went over the fence.

Through his career, Aaron averaged just 63 strikeouts a season. He never whiffed even 100 times in a year — commonplace for hitters these days — and posted a career on-base percentage of .374.

He was NL MVP in 1957, when the Milwaukee Braves beat the New York Yankees in seven games to give Aaron the only World Series title of his career. It also was his lone MVP award, though he finished in the top 10 of the balloting 13 times.

Aaron also was selected for the All-Star Game 21 consecutive years — every season but his first and his last.

His only regret was failing to capture the Triple Crown. Aaron led the NL in homers and RBIs four times each, to go with those two batting crowns. But he never put together all three in the same season, coming closest in 1963 when he led the league in homers (44) and RBIs (130) but finished third in hitting (.319) behind Tommy Davis of the Dodgers with a .326 average.

"Other than that," Aaron said, "everything else was completed."

Gibson, Ford, Brock, Seaver, Kaline, Morgan, Niekro, Lasorda, Sutton and now Hammerin Hank. We’ve lost some of the greatest to ever do it this year. @TommyLasorda is gonna have a hell of a roster to manage up there. #RIPLegends