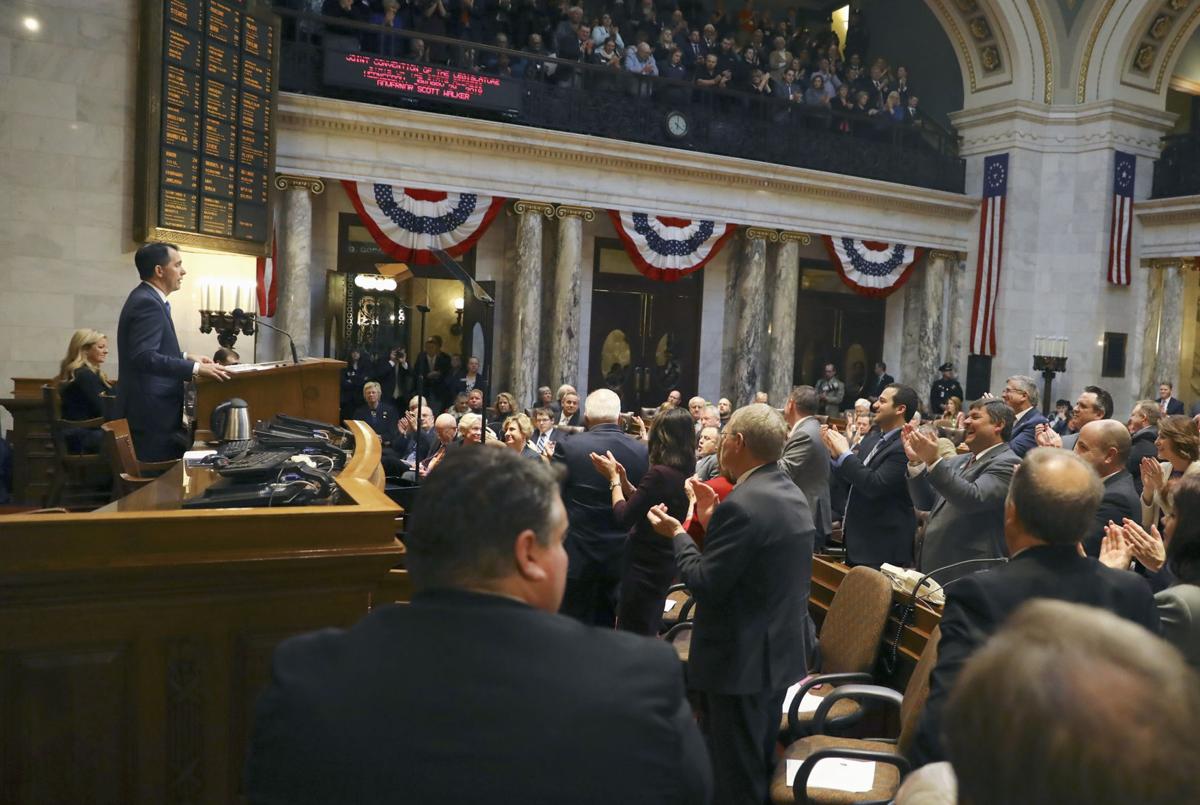 Gov. Scott Walker delivers the governor’s annual State of the State address Jan. 24 at the Capitol in Madison. An investigation by the Wisconsin Center for Investigative Journalism has found that since Walker took office in 2011, the length of time bills are deliberated in the Legislature dropped significantly as Republican lawmakers increasingly fast-tracked legislation. 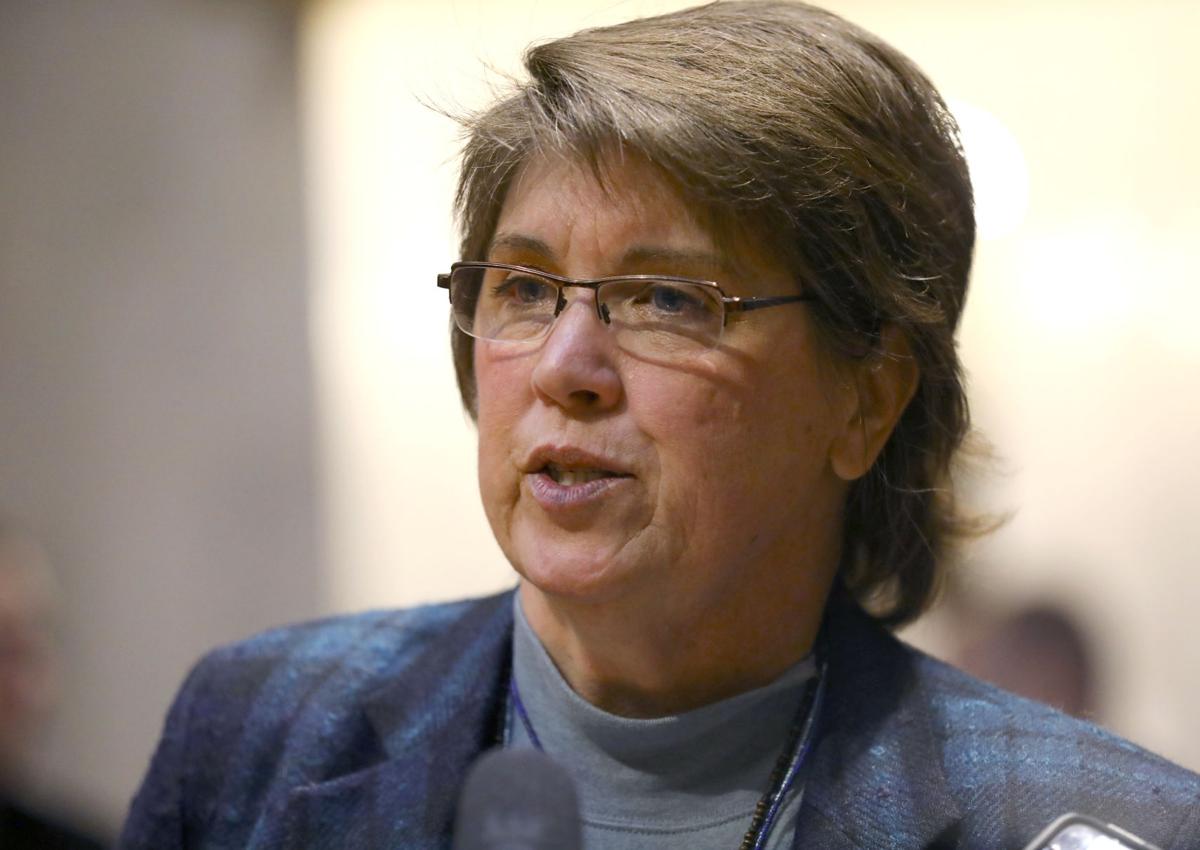 In this Jan 24, 2018, photo provided by the Wisconsin Center for Investigative Journalism, Wisconsin state Sen. Kathleen Vinehout, D-Alma, is interviewed after Gov. Scott Walker’s annual state of the state address at the state Capitol in Madison. The length of time bills were deliberated dropped significantly soon after Gov. Scott Walker and Republican legislators took control in 2011, diminishing the public’s opportunities to influence lawmaking, records and interviews show. Vinehout has been outspoken about bills that move too quickly. She believes such fast-tracking hampers democracy by leaving regular people out of the political process. (Coburn Dukehart/Wisconsin Center for Investigative Journalism via AP) 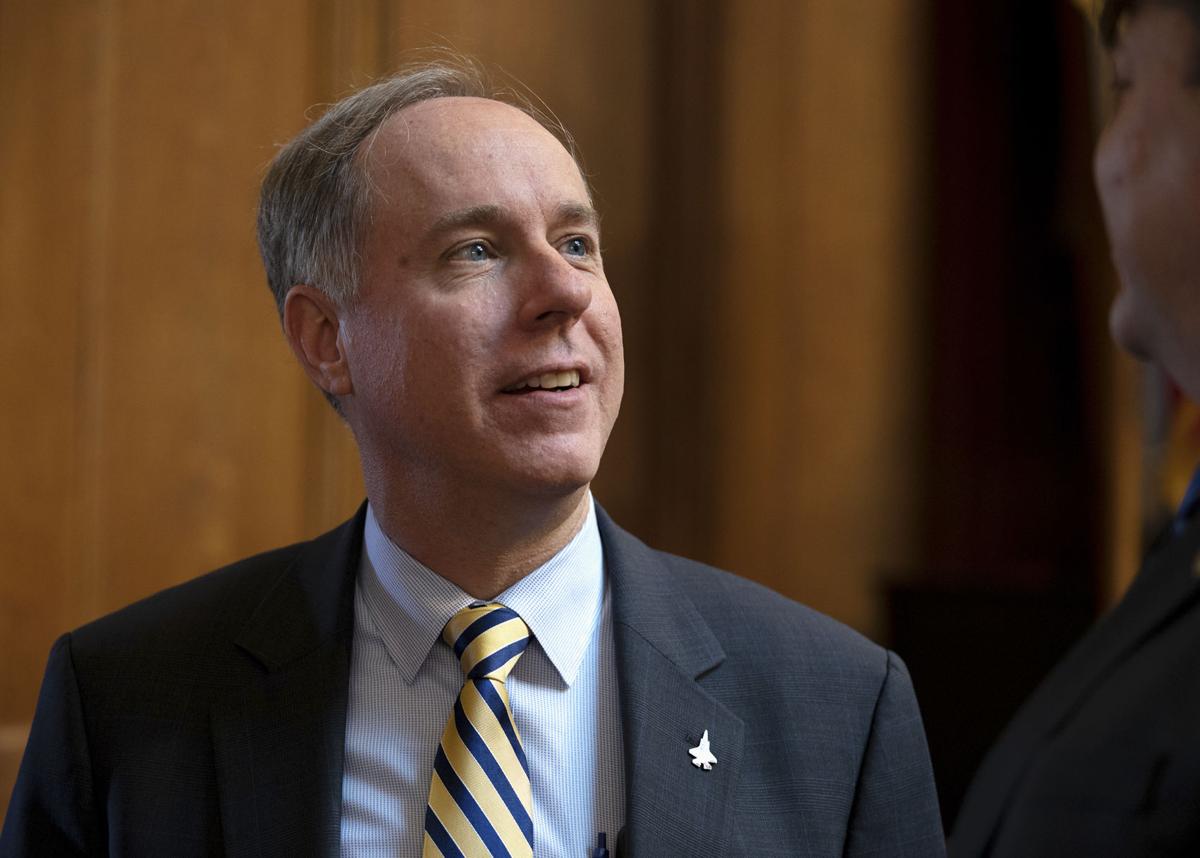 Gov. Scott Walker delivers the governor’s annual State of the State address Jan. 24 at the Capitol in Madison. An investigation by the Wisconsin Center for Investigative Journalism has found that since Walker took office in 2011, the length of time bills are deliberated in the Legislature dropped significantly as Republican lawmakers increasingly fast-tracked legislation.

In this Jan 24, 2018, photo provided by the Wisconsin Center for Investigative Journalism, Wisconsin state Sen. Kathleen Vinehout, D-Alma, is interviewed after Gov. Scott Walker’s annual state of the state address at the state Capitol in Madison. The length of time bills were deliberated dropped significantly soon after Gov. Scott Walker and Republican legislators took control in 2011, diminishing the public’s opportunities to influence lawmaking, records and interviews show. Vinehout has been outspoken about bills that move too quickly. She believes such fast-tracking hampers democracy by leaving regular people out of the political process. (Coburn Dukehart/Wisconsin Center for Investigative Journalism via AP)

MADISON — The length of time bills were deliberated dropped significantly soon after Gov. Scott Walker and Republican legislators took control in 2011, diminishing the public’s opportunities to influence lawmaking, according to an analysis of records and interviews by the Wisconsin Center for Investigative Journalism.

The center’s analysis of all bills enacted into state law over the past two decades shows an overall decline in deliberation time — with the most dramatic drop happening just after Walker took office.

In Walker’s first two years in office, averagedeliberation time was 119 days, compared with a20-year average of 164 days. During that 2011-12 session, 1 out of every 4 bills, including some of the Republicans’ most sweeping and controversial legislation, was passed within two months of introduction.

In comparison, in the 1997-98 session under Gov. Tommy Thompson, it took an average of 227 days for a bill to be introduced, aired in public hearings, passed by the Assembly and Senate and signed into law. Republicans controlled the governor’s office and Senate at the beginning of that session, adding control of the Assembly in 1998.

By the 2017-18 session, when Republicans controlled both chambers of the Legislature and the governor’s office, the deliberation time averaged 162 days — close to the 20-year average, but well below the levels seen in the pre-Walker years.

Among the bills approved in Walker’s first session was Wisconsin’s 2011 redistricting plan, which the U.S. Supreme Court recently kicked back down to the court that had overturned it. After being crafted in secret by Republicans, it was approved by the Legislature in 29 days.

Act 10, the law that stripped collective bargaining from most public workers in Wisconsin, was approved in 24 days. Walker’s goal with that bill, he conceded privately, was to “drop the bomb” on organized labor. Crowds estimated at up to 100,000 people showed up at the Capitol to protest that 2011 measure. It has been credited with cutting the ability of unions to support Democratic candidates in Wisconsin.

Four experts on legislation and Congress said they are unaware of a similar analysis of deliberation speed on the state or national level, so it is unclear how the approval times in Wisconsin compare to those of other states.

Since that first chaotic session under Walker, the Legislature has spent more time deliberating on legislation, the center’s analysis showed.

But some of the most contentious measures in recent years continue to be fast-tracked, including the 2017 vote authorizing the $3.2 billion state taxpayer subsidy to electronics manufacturer Foxconn and 2015’s so-called Right to Work law, which bans labor unions from collecting dues from any workers who refuse to pay them.

The speed with which bills pass through the Wisconsin Legislature can be an indicator of whether the public’s voice in shaping public policy is being heard.

“I think it’s a symptom of the legislative process becoming less participatory,” said Barry Burden, a professor of political science at UW-Madison and director of the Elections Research Center. “We see more examples . of bills being sprung very quickly without members knowing they’re coming, without the public knowing, and hearings being announced very quickly without lots of notice.”

Democratic state Sen. Kathleen Vinehout of Alma has been outspoken about bills that move too quickly. She uses a colorful metaphor to illustrate the dangers.

“I think of legislation like fish,” said Vinehout, who ran unsuccessfully in the Democratic primary for governor. “It needs to be opened up and set on the table in the kitchen and have the sunshine on it, and we need to see if it smells. Legislation that moves too fast and too dark is almost always legislation that is bad for democracy.”

The group GovTrack.us, which tracks the U.S. Congress and aims to help Americans participate in national legislation, was asked whether measuring speed of bill approval could shed light on the strength of democracy. In a statement, the group, which is politically independent and self-supporting through advertising and crowdfunding, said “reasonable people could disagree” about whether quickly passed bills can be used to assess the health of a democracy.

In Wisconsin, the most dramatic increase in the speed of legislation came when the Legislature and governor’s office flipped from Democratic to Republican control in 2011. The data show that the average time from bill introduction to the governor’s signature dropped by 40 days — 25 percent — compared with the 2009-10 session under Democratic Gov. Jim Doyle.

Rick Esenberg, the founder and current president and general counsel of the conservative Wisconsin Institute for Law & Liberty, said one reason for faster passage of legislation could be the style of the current legislative leaders, Republican Senate Majority Leader Scott Fitzgerald of Juneau and Republican Assembly Speaker Robin Vos of Rochester.

“It certainly is my impression that a lot of times, leadership wants to move really quickly on bills,” Esenberg said.

West Bend businessman and thought leader John Torinus, who voted for Walker for governor three times and contributed to his 2010 campaign, has dubbed the strategy “government by surprise.”

“It’s become standard practice now for Republicans to meet with their donors and corporate lobbyists behind closed doors, write a bill in secret, and then pass it in a matter of days without any public input,” Shilling said.

The center, which is independent, nonpartisan and nonprofit, analyzed deliberation times to measure the opportunity the public has to weigh in on legislation and whether that has changed over time.

Vos, however, criticized the center’s analysis as a “politically motivated and superficial (study) that shows a lack of understanding of the complexity of the legislative process.”

Said Vos: “The Legislature has approved bills in an efficient, effective and transparent manner. This flawed study doesn’t take into account the types of bills being approved, the percentage of bills that don’t become law (roughly 75 percent are only reviewed and don’t advance), the legislative session calendar, any national comparisons (many legislatures only meet for 120 days) or changes in the chamber rules over the last 20 years.”

UW-Madison political science professor David Canon raised some of the same issues, saying that such an analysis ideally would examine whether there was unified or divided control of government and the significance of the legislation.

Canon said that the speed with which legislation passes is a better indicator of whether there is gridlock than whether a democracy is healthy.

However, those agreements were put in place beginning in 2013 — after the sharp uptick in fast-tracking that occurred when Walker first took office.

Vos’ Democratic counterpart, Hintz, said these procedural changes focus primarily on the final floor debate before a bill is passed and would have negligible effect on the overall length of deliberation time.

Hintz added that the center’s analysis affirms his own experience.

“Some of the bills that have been the most controversial, where the benefit to the public is questionable, have moved the fastest,” Hintz said.

Jacob Stampen, an emeritus professor of educational leadership and policy analysis at UW-Madison who has tracked legislative voting patterns in the state, said one factor is the American Legislative Exchange Council, which has been tied to at least three dozen bills and budget measures in Wisconsin since Walker took office.

ALEC is a national organization of state lawmakers, most of them conservatives, who meet with corporate interests to craft business-friendly legislation in the form of “model bills” that can be quickly introduced in numerous states.

Stampen said when Walker was elected, “They behaved as if they had a large majority and they could pass anything they wanted to,” adding that the variety of the fast-tracked legislation was “breathtaking.”

The so-called Right to Work Law, 2015 Wisconsin Act 1, a model fast-tracked bill, was introduced on Feb. 23, 2015, passed both houses in a specially called session and was signed into law 14 days later. It ended the ability of unions to require all workers covered by union contracts to pay dues — dealing another blow to the power of unions.

Although less used in the 2017-18 session, fast-tracking continues.

The Foxconn deal, or Wisconsin Act 58, took 48 days from its initial proposal in the Assembly to its enactment. The 13-page bill obligates Wisconsin taxpayers to an estimated $3.2 billion in state incentives plus an expedited $408 million upgrade of Interstate 94, one of the largest public subsidies of a private company ever in the United States. It was introduced at Walker’s request.

Vinehout said the bill, which came with little notice, was “vague” with “a lot of unknowns.” She voted against it along with the majority of Democrats and a few Republicans.

Burden said parties “have less dissent — even within their own party.”

“There used to be more frequent negotiations between members of both parties, and so that prolonged the process of dealing with legislation,” he added. “Now there is very little conversation across the aisle.”

The nonprofit news outlet Wisconsin Center for Investigative Journalism provided this article to The Associated Press through a collaboration with Institute for Nonprofit News.