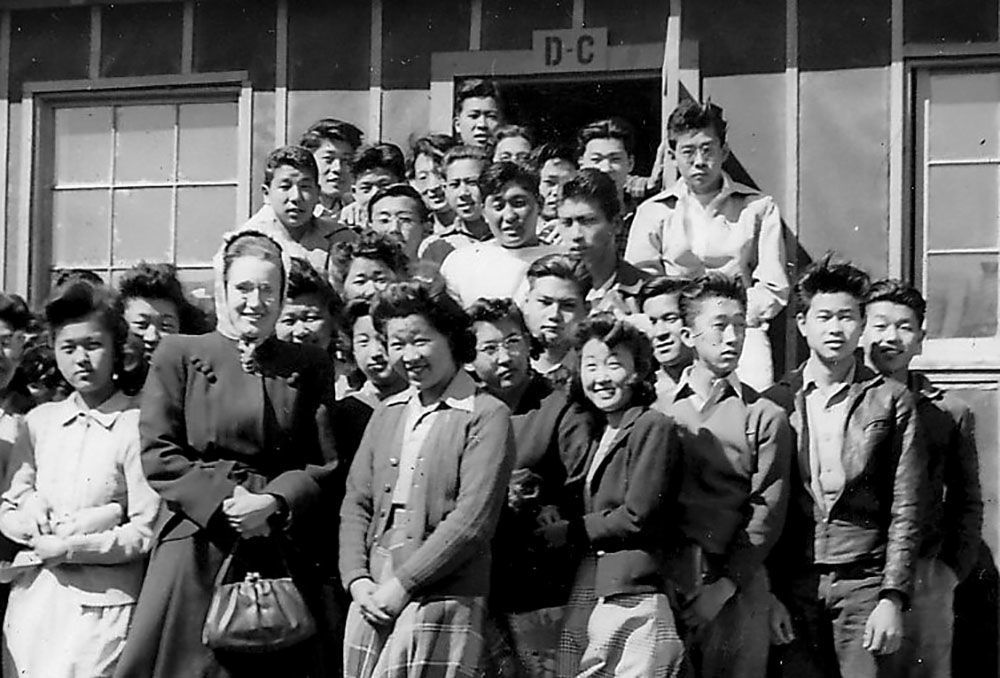 Clarice Chase of Eau Claire, front row second from left, was a teacher at an internment camp for Japanese-American students in northwest Wyoming in 1942 and ‘43. 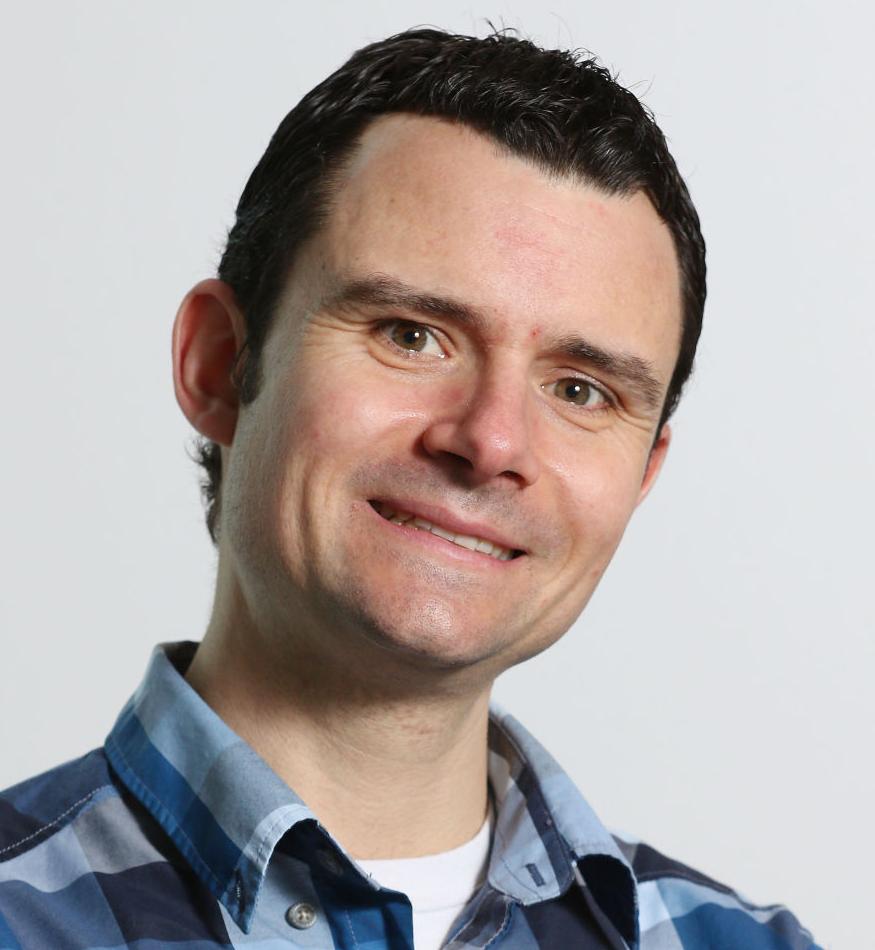 The sophomores sat stiffly in backless wooden benches as a storm raged just beyond the barracks walls. Thirty-year-old Clarice Chase stood at the front of the class, peering out at her 50 Japanese-American students. It was Oct. 5, 1942 — the first day of school at Heart Mountain Relocation Center in northwest Wyoming.

“All eyes were upon me,” Clarice Chase Dunn (as she was later known) reflected in an article years later. “I tried to read them. Expectation? Foreboding? I couldn’t tell. I thought of the usual first day of school. Excitement. Noise. Laughter. Reunion. Nothing here but a silence which only intensified the howl of the wind outside the barracks.”

The silence was to be expected. Over the past two months, these students — along with 85,000 or so other Japanese and Japanese American citizens — had, following President Franklin Roosevelt’s Executive Order 9066, been uprooted from their lives and forced into 10 internment camps scattered throughout the U.S. The War Relocation Authority’s 1942 report noted that “every effort was made to hold families intact,” though it was a small kindness in light of the forced relocation that risked tearing them apart.

The Heart Mountain location was particularly desolate, providing a backdrop nearly as hopeless as many of the internees surely felt. Due to the influx of 10,000 internees in under a year, the site’s 46,000 acres of farmland morphed into Wyoming’s third largest city. “The result,” Clarice said, “was one big dust bowl.”

Nevertheless, the students were grateful for Ms. Chase’s commitment to their education, a small flicker of light amid the darkness. For all Heart Mountain Relocation Center lacked — adequate food, shelter, furniture, and coal — at least it had Clarice Chase.

Yet were it not for a pair of friends, Clarice might never have made her way to the front of that Heart Mountain classroom. In 1942, when word came down that the War Relocation Authority was in search of qualified teachers for the relocation centers, Clarice’s friends encouraged her to apply.

Indeed, in the 1930s, Clarice’s home of Eau Claire was hardly a model city for diversity. Throughout her four years at Eau Claire State Teachers College (known today as the UW-Eau Claire), Clarice rarely had the opportunity to interact with non-white people. A few years later, while attending UW-Madison for graduate work, she regularly attended “co-op” mixers, which provided her the chance to mingle with African-American and Asian students. “I always thought that my real education came from the co-op mix, rather than the courses on the hill,” she said in a 2004 interview.

Despite its lack of diversity, Clarice’s years at Eau Claire State Teachers College nevertheless proved vital to her teaching career. Even if her enrollment at the college was nearly as unexpected as her time at Heart Mountain. In 1933, while living in Eau Claire, her dissatisfaction with her $2.50 per week paycheck for doing household chores led her to try to improve her situation by unconventional means.

“So, dumb kid that I was, I walked down to the (Eau Claire State Teacher’s) college, and asked to see … President Schofield. And I think that was the longest hour of my life sitting there, waiting to see him.”

At last, the college’s bespectacled president called the 21-year-old into his office.

“I do not have the $20 for tuition,” Clarice said bluntly. But she promised to work off her debt on campus, if President Schofield allowed her to enroll.

“Oh yes!” President Schofield replied. “I’ll trust you for it.”

Nearly a decade later, while standing before her students at Heart Mountain, it seemed she was repaying Schofield’s kindness. But Clarice’s motivation for teaching at Heart Mountain was about more than repaying a debt; she wanted to reaffirm her Japanese American students’ faith in democracy, even if democracy, in this instance, had failed them.

Over time, slight improvements were made to the relocation center, though the addition of desks and textbooks did little to improve morale. The lack of reading material remained a problem for many students, including senior Stanley Yoshida, who begged Clarice for more books. Since all Clarice had to offer were her Book-Of-The-Month Club selections, she paid a visit to the public library in nearby Cody, Wyoming, returning to the internment camp with 100 books checked out under her name.

A few of Clarice’s fellow teachers at Heart Mountain were shocked by her deep trust in her students.

“You’re responsible for those books,” they chided. “They won’t bring them back.”

Decades later Clarice proudly remarked, “I never lost a one.”

In late April of 1943 — following seven months of teaching at Heart Mountain — Clarice left the relocation center for good. She did so on doctor’s orders. The climate’s combination of dust and wind and heat and cold served as a perfect storm that inflamed Clarice’s chronic bronchitis. After several serious respiratory infections, it was apparent that Clarice’s long-term health was in jeopardy.

Before leaving, her students offered her several heartfelt gifts, including a pair of autograph books into which they composed personal notes expressing their appreciation for their teacher from Wisconsin.

“We want you to be with us, but perhaps, we are selfish,” one student wrote, “for where you are going may be far more interesting and enjoyable than Heart Mountain.”

Prior to her death in 2010, Clarice donated her autograph books to UW-Eau Claire’s Special Collections and Archives on the fifth floor of McIntyre Library. You can hold them in your hands, leaf through the pages, and read dozens of heartfelt notes from the students. Clarice donated the books, she explained, in the hopes that they might “add a human touch” to what was, by all accounts, an inhumane moment in American history.

An inhumane moment, and an ironic one, too.

“Although there were no gas chambers, ovens, or S.S. at Heart Mountain, it was nonetheless a concentration camp,” scholar Douglas W. Nelson writes in Heart Mountain: The History of an American Concentration Camp.

Which means that while U.S. forces were liberating concentration camps on one side of the ocean, the U.S. government was erecting them on the other. Unquestionably, the camps were vastly different in their intentions, yet as Nelson writes, the establishment of camps like Heart Mountain not only infringed upon the “legal guarantees” of its citizens, “but also of the traditional Western values of liberty, privacy, individuality, and human dignity.”

Clarice confronted her country’s wrongs in real time, doing her small part to prove to her students that their futures were worth fighting for.