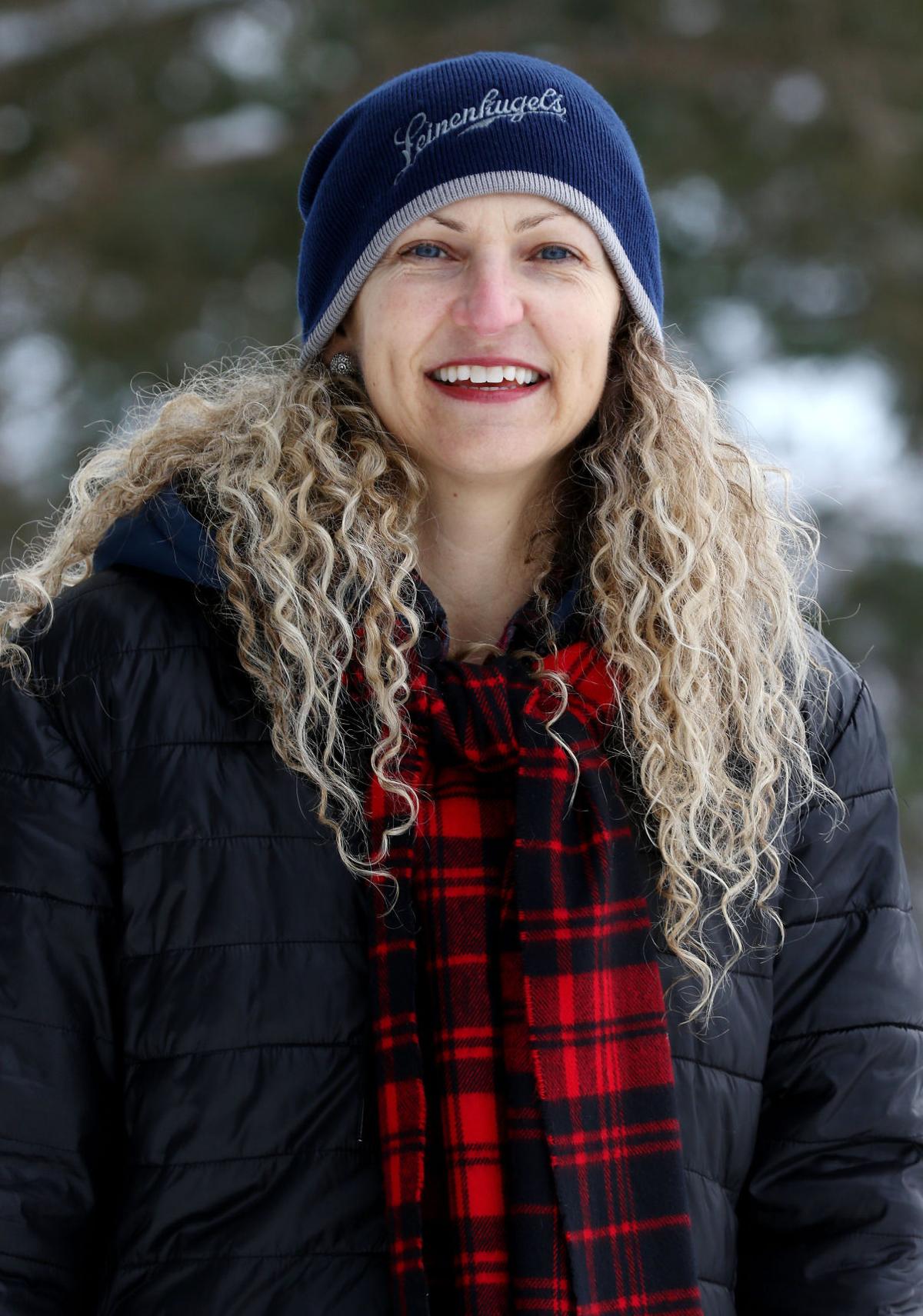 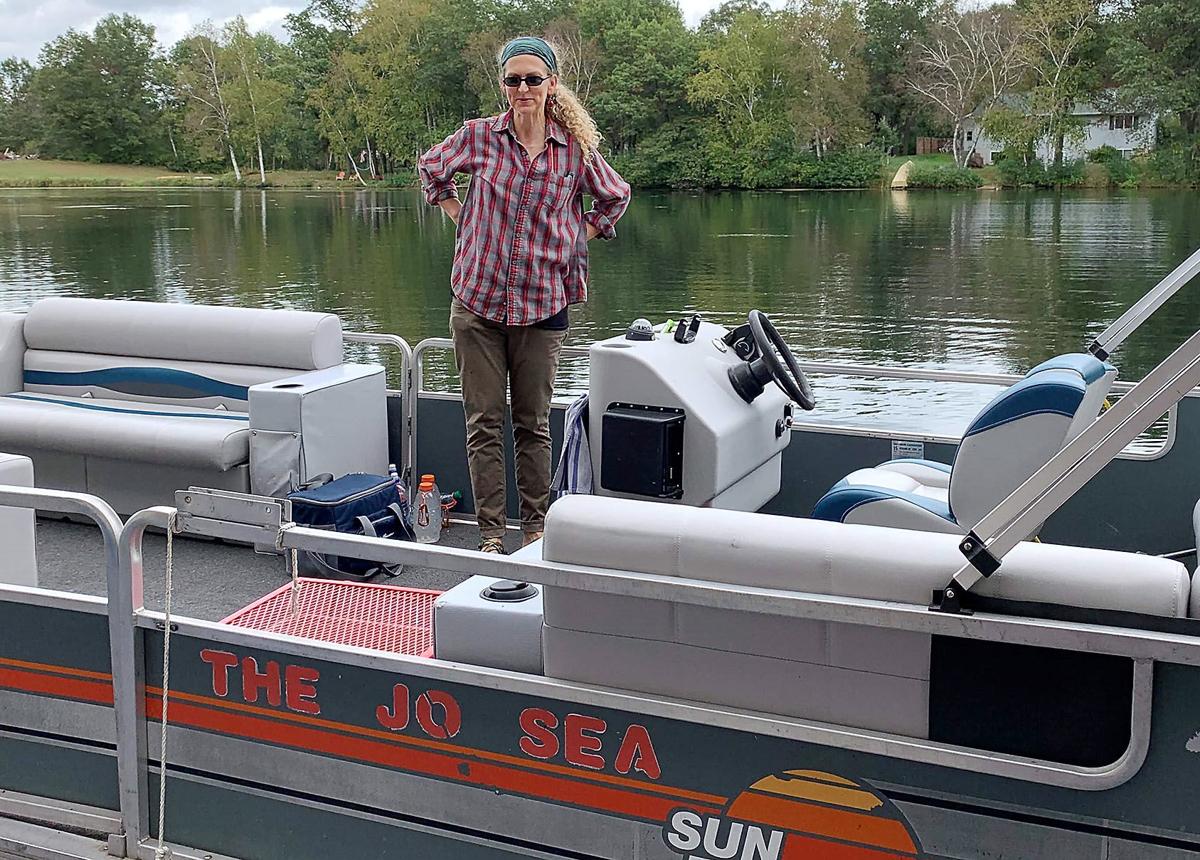 Eight years ago, after watching the Packers in a bar, my son bid on a 1987 Sun Tracker pontoon. Let’s just say Alex’s judgment wasn’t crystal clear. The 24-foot “party barge” needed new seats, carpet and motor. Alex finished college and military training then landed a job in Texas, so his rebuilt beauty stayed behind in storage.

When my dad died last year, Alex rushed home for the funeral. Though he’d talked about selling his pontoon before, he was really ready this time. “Why don’t you buy it,” he pitched. “I’ll give you a deal.”

As much as I liked the thought of spending Dad’s inheritance on a party barge lovingly restored by my son, I knew I had to float the idea past my husband. Bruce said, “What will we do with a boat that size on no-wake Lake Hallie?” He finally agreed, if we traded in the motor for a smaller one and named the pontoon after my dad.

Last summer Minnetonka’s 2-horsepower electric outboard was in high demand. We couldn’t get it installed until August at Skeeter’s, where Alex’s boat had been wrapped in plastic since 2016. When we got it home, I stenciled on “The Jo Sea,” a female aquatic version of Joe See. We christened her not with hoity-toity champagne but with Dad’s favorite drink, “Mist and Mist,” Canadian Mist and Sierra Mist.

The first week we pontoon with all three of Bruce’s kids, a rare treat. Dan’s driving, with Bruce beside him. Our new motor groans and sputters. I hit the switch to lift the trim. An ancient, mossy rope chokes the propeller. Noah climbs over the stern for a closer look. Former lifeguard Laura offers to jump in and pull us to the nearby landing. “Never get out of the boat,” I say in my best “Apocalypse Now” impression.

Noah gives the rope a tug. He jokes about a dead body attached to it. Fortunately Bruce doesn’t go anywhere without a pocket knife. Noah saws through the rope and frees the propeller. Anyone on shore that day may have heard a collective whoop of voices, boaters excited to be out together on this blue-blue day but even more thrilled that their party barge can take them home.

The original party barge cruised Lake Hallie 140 years ago, and it was actually a barge. The lake formed in 1843 and was a nameless holding pond for a nearby sawmill. In 1880 as the logging industry waned, Badger Mills co-owner John Ure Jr.’s vision was that “Lake Hallie” — which he named after his daughter — might become a recreational attraction. He christened his two steamboats after his other daughters: Lorraine and Antoinette. One towed a barge on which couples danced as they sailed the lake.

How this must have looked: women in bustled long dresses, swirled by their male partners on a floating, fenced-in dance floor. The tinny music from a cranked phonograph likely carried for miles. Farmers looking up from evening chores may have wondered if the source was insect or human.

People have forever been drawn to water. Wallace Nichols’ book explains why. “Blue Mind: The Surprising Science that Shows How Being Near, In, On or Under Water Can Make You Happier, Healthier, More Connected and Better at What You Do” is quite a title and a proclamation. Human brains are hardwired to react positively to water, not only for calming but healing and even sparking creativity. Nichols calls it “getting your blue mind on.”

I am so ready for this, especially in April, after three weeks of safer-at-home. One night I dream I bust my pontoon off the Boat Center storage lot and pull her down the highway still in blue plastic. The next morning Bruce says, “Maybe you should just call first.” To my surprise, Jake at Skeeter’s answers. I arrange for The Jo Sea to be delivered as soon as ice goes off the lake.

After my second phone conversation with Jake, he asks, “Are you related to the Sees from 617 Harding Street?”

I say, “That was our house till my dad died.”

I exclaim “Noo way” so loudly I’m sure this young man has to pull the phone from his ear.

I am used to Chippewa connections. Still, this one.

“We love it,” Jake says. He tells me that when he and his girlfriend first toured Dad’s house, Jake’s mom — a Thorn girl who grew up down the street and was friends with my siblings — encouraged them to buy the See house. What can I say but, “Small world.”

Most trips on The Jo Sea I head toward the widest stretch of Lake Hallie. As the sun goes down the metal edge of a faraway dock turns golden, then on fire. Everything looks different from the height of a pontoon, part of the inspiration of Minnesota farmer Ambrose Weeres who in 1952 developed a prototype — wooden platform on top of two steel barrels — based on a seafaring design used for thousands of years. He later opened Weeres Pontoons, the first-ever American pontoon company. His family-friendly vessels were an easy sell: A tippy fishing boat versus a stable pontoon is like the difference between walking on a gangplank or a deck.

One late afternoon my best friend Karen and I lumber along in The Jo Sea; even kayakers pass us by. At 79 acres, Lake Hallie is so small we loop around twice just to feel like we’ve been somewhere. As we pass Karen’s childhood home, her mom comes out to see us. Helen stands in the yard barefoot and waving.

“No,” her mom calls back. Still, Helen walks closer to shore. She recently gave me the greatest compliment: “No one loves Lake Hallie like Patti.” That’s something coming from an 80-year-old who’s lived on this lake for 74 years.

Karen yells to her, “Meet us on Larry’s dock.”

Helen does. Karen helps her mom aboard.

I putt-putt us over to where Helen grew up: the farm her parents, Clark and Carol Hughes, bought in 1946.

We drift past the Clark Hughes Boat Landing, named for her dad who donated the land. Helen tells us she can’t remember the last time she cruised the lake. Decades or more. At sunset we take in the spectacular view of her old homestead from the middle of Lake Hallie. I can see in Helen’s eyes what none of us has to say.

See is an award-winning author whose work has appeared in Brevity, Salon Magazine, The Wisconsin Academy Review, The Southwest Review, HipMama, Inside HigherEd and many other magazines, journals and anthologies. She wrote the blog “Our Long Goodbye: One Family’s Experiences with Alzheimer’s Disease,” which has bee read in more than 100 countries, and she is a frequent contributor to “Wisconsin Life” on Wisconsin Public Radio. She lives in Lake Hallie with her husband, writer Bruce Taylor.