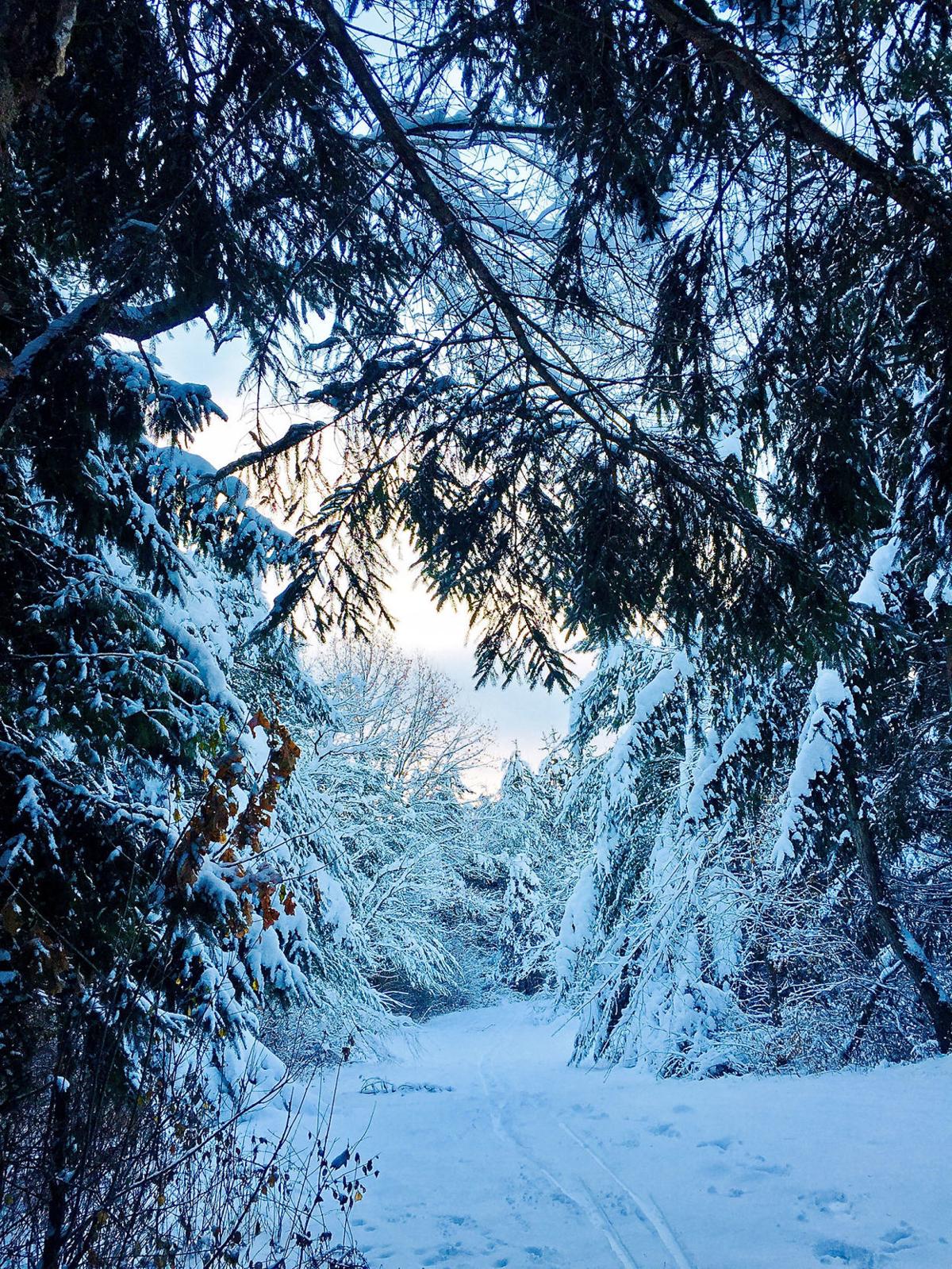 Lowes Creek County Park south of Eau Claire is the perfect setting for some peace and quiet. 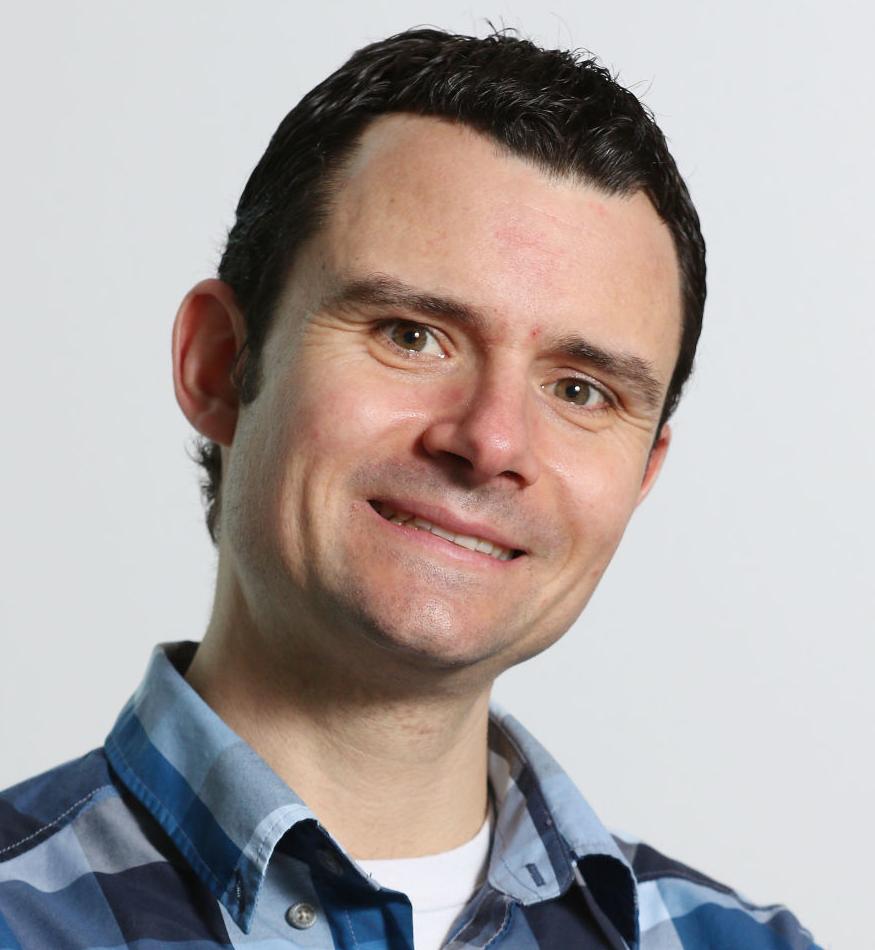 I struck out in search of silence, and I found it a quarter mile deep in the woods. It wasn’t easy getting there, but it was a whole lot easier with the skis. Not that I’m a skier. But after a month spent on the receiving end of our baby’s caterwauling, I figured I’d give it a try. By that point, I’d have tried anything for a little peace and quiet.

And so, shortly after sunup I made the drive to Lowes Creek County Park, bypassing the ice-slick bridge and the half-frozen flag until rounding the bend toward the park entrance. Aside from the truck plowing the lot, I was the only one there. Which was how I wanted it. A chance to disappear for a while, preferably without a trace.

Snapping my boots into place, I gripped the ski poles tight, then glided into the grooves in the snow. Though I’d only cross country skied a handful of times, my body managed to find the rhythm. On that pre-dawn morning, I heard no birds, no crackling branches, no anything but the shushing of my skis. The world was a snow globe freshly shaken, and I savored all of it: the touch of the flakes on my forehead, the sway of the pines in the breeze. Midway through the route, I noticed deer tracks running parallel to the ski tracks. Who came first, I wondered, the skier or the deer?

We were just a few days into December, though the full weight of winter had already thrust itself upon the park. The creatures, if there were any, had stocked up and holed up and vanished. Though as the tracks indicated, surely a few deer still remained. I imagined them bedded down in the snow between the tangles of trees, chuckling at the two-legged mammal with the sticks tied to his feet doing his best impression of being wild.

It was all so wondrous — the silence, the solitude, the hint of the deer — that on the drive home, I thought to myself, You know, maybe winter’s not so bad after all.

That was my first mistake.

I’d barely pulled into my drive before winter became exactly that bad. Mere moments passed before my two eldest children came barreling out of the house — already late for elementary school.

In her effort to do so, she hit a patch of ice, prompting her to cartoonishly windmill her arm as she tried to stay upright. I held my breath and expected the worse, but the worst did not come. Her wind-milling paid off. And then, the kids were off to take their chances on the next patch of ice. I sighed in relief. Winter hadn’t doomed us yet; though the day was still young.

My wife exited the house next, baby carrier in hand.

“Where are we going?” I asked.

That was my second mistake.

Taking charge of the baby carrier, I prepared to lock it into the van’s back seat. Only the van’s sliding door was frozen shut.

No matter, I thought, I’ll just try the other door.

I was left with one choice: maneuvering the baby carrier (including the baby) through the front seat, over the console, and then snapping it into place in the back. In what appeared to my neighbors to be an audition for Cirque du Soleil, I contorted myself into all the necessary knots — hunkering low, finessing the curves, and high stepping that console — until reaching the car seat base and clicking in the carrier.

Upon starting the van, my wife and I learned that winter wasn’t done with us yet. In my attempts to open the sliding doors, I’d apparently cracked them just wide enough to trigger the “open door” warning light on the dash. The van, in its infinite wisdom, had decided that the trunk was open, too, which meant an additional warning light, as well as an beeping sound that accompanied us throughout the entire 10-minute drive to the store. I cranked the Christmas music to drone out the beeping, but that only spurred the baby to action. Now we had three kinds of noise to contend with— two of which we had no control over.

So much for silence, I thought.

None of that broke me: not the ice patches, not the frozen doors, not even the beeps and the wails. What broke me was that winter had struck again when I wasn’t looking. No sooner had we entered the grocery store than I reached into my pocket to notice that my hat was gone. Not just any hat, but my black beanie, which, since the winter of my seventh-grade year, had donned itself faithfully atop my head. We had traveled the world together, from Alaska to the Smoky Mountains, from Montana to New Mexico to Eau Claire. And now, in a final blow to morale, winter had absconded even with that.

I imagined my hat dangling from some gnarled branch along the ski trail, plucked from my head without my knowing it. It was lost, all alone, and growing colder by the minute. I sighed, bracing myself in the chip aisle. All I’d wanted was to clear my head, but I’d cleared my hat from my head, instead.

You know, I thought, maybe winter’s that bad after all.

And then: the sun. The glorious, glorious sun. Which, while we were in the grocery store, had managed to break through the gray just long enough to thaw the van’s sliding doors. And the trunk too. Gratefully, I had no need to repeat my Cirque du Soleil routine. All I had to do was swing the van doors wide, click the baby carrier into place, and load the groceries. You know, like a normal person.

I started the engine, and the dash — which was previously lit with more lights than our Christmas tree — was now back to its single “check engine” light, to which we’d grown accustom.

As was the fact that the beeping had stopped. And the baby had stopped her caterwauling too.

That day, I unloaded the groceries without slipping on a single patch of ice. And my snow blower started. And the kids and I made a pretty good snow fort too. I drowned my winter-induced sorrows in a couple gallons of hot chocolate, but even that didn’t seem like enough.

The truth is, my rough start to winter had rattled me; so much so that the following day, I took once more to my skis, returning to the county park in search of a few more minutes of silence. I found it. And I found something else, too.

My hat — which some kind soul had prominently displayed for me beside the trail map.

Cue the theme song from Chariots of Fire; set the camera to slow motion.

I ran toward it, then dropped to my knees in the snow.

“You came back,” I whispered.

My hat, so overcome with emotion, said nothing.

Smiling, I returned it to its rightful place atop my head.

“Do you worst winter!” I hollered into the silence.

Probably, that was my third mistake.

Next Saturday: Patti See reminds us all to share our spare.