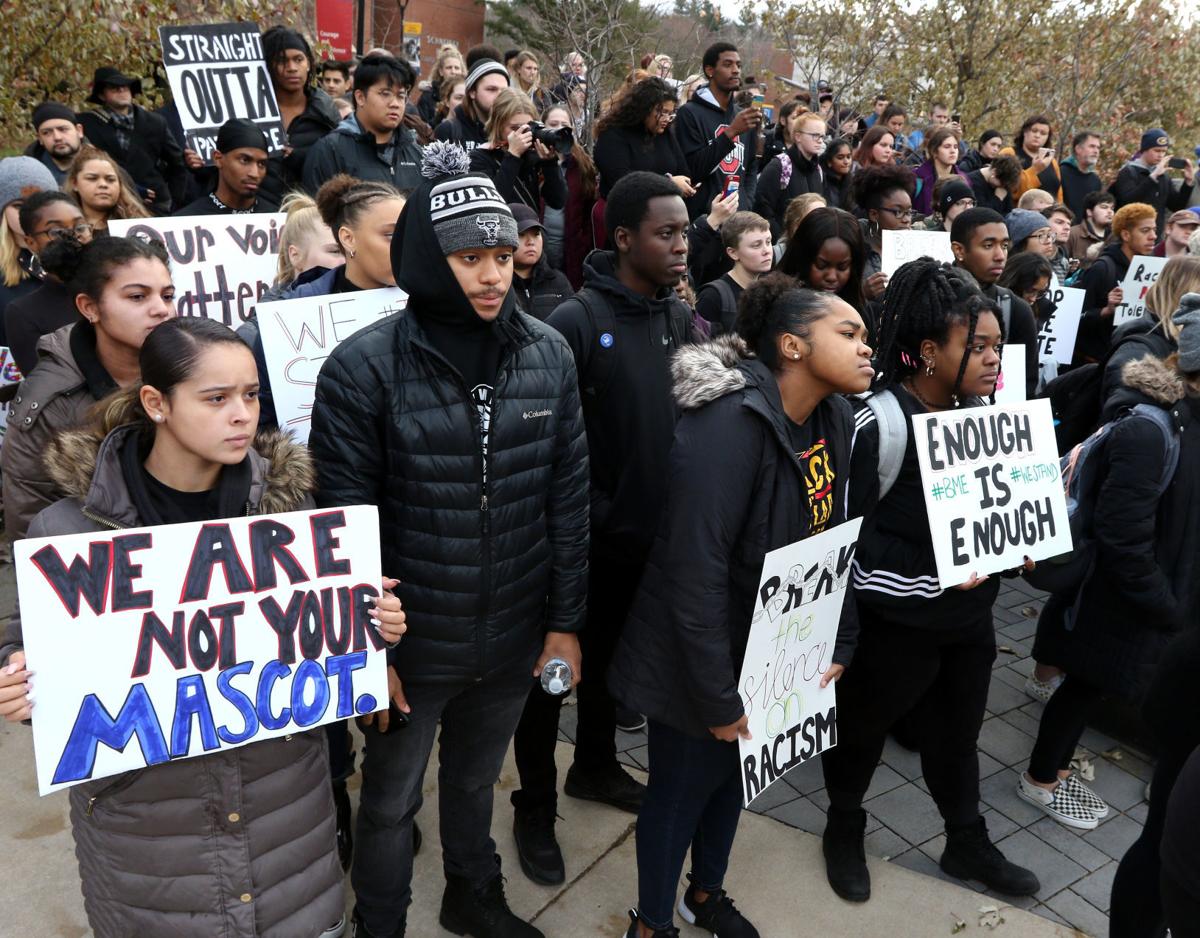 Over 300 people, including students, faculty and staff members, attended a silent protest against racist incidents Nov. 25 at UW-Eau Claire. Students leading the protest decried a “culture of racism and bias” in the university’s athletic department, asking for institutional change. View more photos at LeaderTelegramPhotos.com. 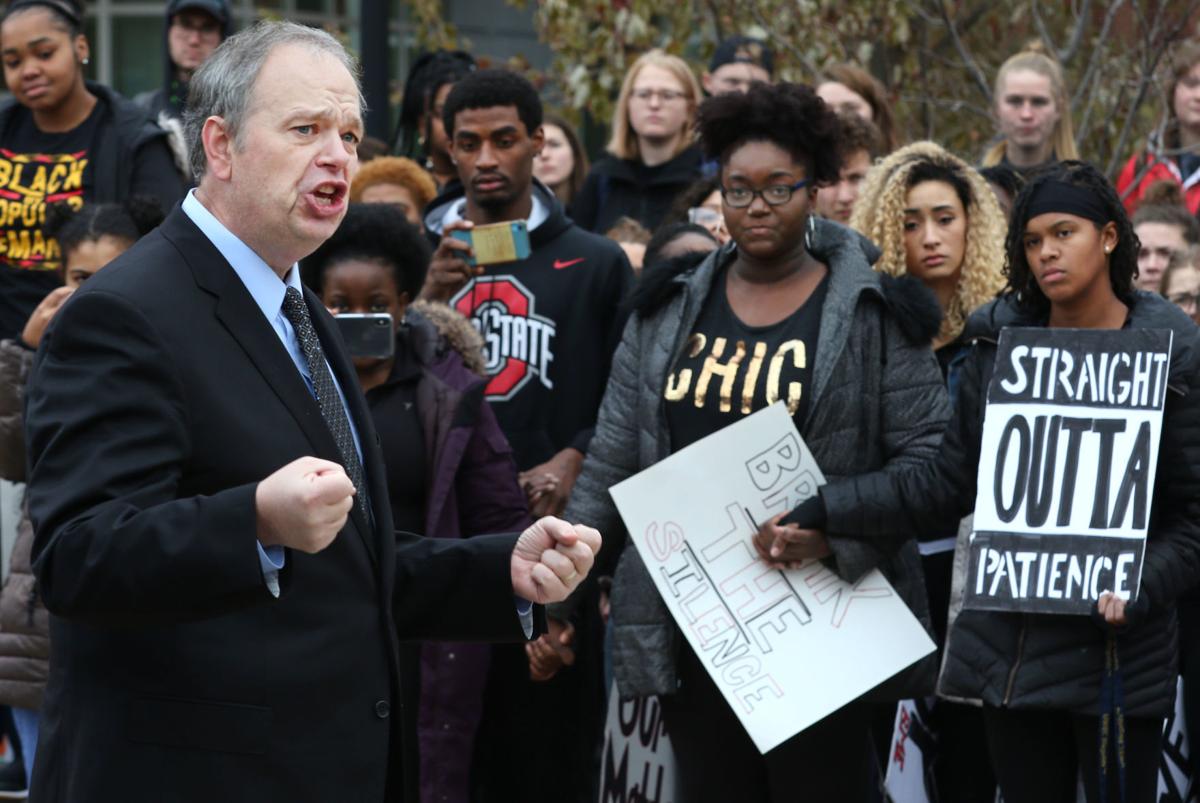 UW-Eau Claire Chancellor James Schmidt on Nov. 25 asks students to hold hands during comments addressing a racist incident on campus earlier in November. The university said Friday that it has decided on disciplinary sanctions for students involved, but said it could not disclose the sanctions due to the Family Educational Rights and Privacy Act (FERPA).

Over 300 people, including students, faculty and staff members, attended a silent protest against racist incidents Nov. 25 at UW-Eau Claire. Students leading the protest decried a “culture of racism and bias” in the university’s athletic department, asking for institutional change. View more photos at LeaderTelegramPhotos.com.

UW-Eau Claire Chancellor James Schmidt on Nov. 25 asks students to hold hands during comments addressing a racist incident on campus earlier in November. The university said Friday that it has decided on disciplinary sanctions for students involved, but said it could not disclose the sanctions due to the Family Educational Rights and Privacy Act (FERPA).

Hundreds of UW-Eau Claire students left classes Monday afternoon and quietly gathered in the center of campus to protest for long-term change regarding racial equality.

“We’re not out here to rally for consequences or punishment,” student Lewis Balom, president of campus group Black Male Empowerment, told a crowd of over 300 students, faculty and community members Monday. “That’s not going to fix anything.”

A silent walkout, organized by BME and another student group, UWEC Solidarity with People Of Color on Campus, was held in response to racist social media comments toward BME discovered last week.

Five student athletes were suspended from the football team last week after group chat messages revealed comments targeting BME, including a picture of the Ku Klux Klan and a burning wooden cross.

Standing outside Schofield Hall, Balom told the crowd Monday they weren’t rallying to urge short-term consequences for any particular student.

“Three, four generations after us, there will be students who come out here and want to attend this university. They’ll know sanctions were put into place to say this action is not tolerable,” Balom said. “That’s what we’re out here for: institutional change.”

On Monday, BME members and other students silently delivered a list of demands to Chancellor James Schmidt’s office.

The list included requiring all university students to take a course on social and human relations; mandating equity and diversity training for students who undergo sanctions; adding diversity resources; and updating students on every Bias Incident Response Team report filed.

The group’s second demand is that the campus address “a culture of racism and bias in the athletic department,” said BME vice president Jalen Thomas.

BME is asking Schmidt “to investigate these allegations … for removal from the athletic department, participation from all involved students and coaches,” Thomas said.

Schmidt spoke to the crowd after the list was delivered to his office, thanking BME members and calling the group “one of our points of pride as a university.”

“The most recent incident was terrifying, shameful and disgusting,” Schmidt said. “ … You give me hope as a campus we can make good on our diversity statements we’ve had for decades. You should expect transparency from us, you should expect action from us, and today I’m asking for everyone to come together to support one another as we take these positive steps of action.”

The university opened an investigation into the incident last Wednesday. The Dean of Students’ office was continuing its investigation Monday, Schmidt told the Leader-Telegram, but he expects it to be completed, along with “whatever sanctions may follow,” before Thursday.

“I’m really pleased to see the large turnout, our Blugolds uniting to say we hope to drive racism off this campus,” he told the Leader-Telegram after the walkout. “We can’t bury our heads in the sand.”

BME members and students of color sat, locking arms in a circle, in a silent rally for an hour after the walkout ended.

Student Mackenzie Langham, who is involved with UWEC Solidarity with People Of Color on Campus, said the university should be more transparent about the investigation process.

“I think that the administration should step up to the plate … and listen to what we have to say,” Langham said.

Langham was expecting “maybe 100” participants at Monday’s walkout, she said; at least 300 attended.

“I think there needs to be more acknowledgement that this is an issue on our campus and more needs to be done to support different minority groups,” Rusch said.

University faculty began circulating a petition last week, hoping for a staff-wide meeting this afternoon to address the incident.

The Spectator student newspaper first reported on the petition Sunday.

The petition collected a little over 150 signatures as of Friday, said Kate Hinnant, associate professor and head of instruction and communication at the McIntyre Library.

At the meeting, faculty hope to propose new policies for responding to similar incidents on campus, Hinnant said.

Faculty should be notified much faster when a racist or biased incident is reported, said UW-Eau Claire history professor Selika Ducksworth-Lawton.

Students emailed Ducksworth-Lawton Tuesday afternoon alerting her to the racist social media messages, but she didn’t find out from administration until Thursday, she said.

“How do we separate victims from perpetrators? How do we keep everything safe? That’s job number one,” Ducksworth-Lawton said. “There’s a physical safety component to this. When we have a situation like that, faculty should be notified at the same time as student affairs was.”

Ducksworth-Lawton said the staff-wide meeting is slated for 3 p.m. today at the Davies Student Center, the final day of classes before Thanksgiving break.

University officials have declined to name the student athletes who were suspended. Assistant chancellor for facilities and university relations Mike Rindo said last week the university cannot identify them because the investigation is ongoing.

The messages include references to a nonexistent White Male Empowerment group, with a similar acronym to that of the campus’ BME group.

“For all who can’t make the BME meeting, (name deleted) and I are holding WME tonight at 7,” a message reads.

“I’ll be there but I’ll be like 5 minutes late. Think the cross will still be burning? Don’t wanna miss that again,” said another message.

“Yeah we don’t do it till 10 minutes in. That pic is from last weeks meeting,” replied a message referencing the burning cross.

State Rep. Jodi Emerson, D-Eau Claire, said Monday in a statement she has been in contact with Wisconsin Gov. Tony Evers and Lt. Gov. Mandela Barnes about the incident, as well as UW-Eau Claire administration and BME.

“We cannot turn a blind eye to this situation and hope the matter resolves itself,” Emerson said.