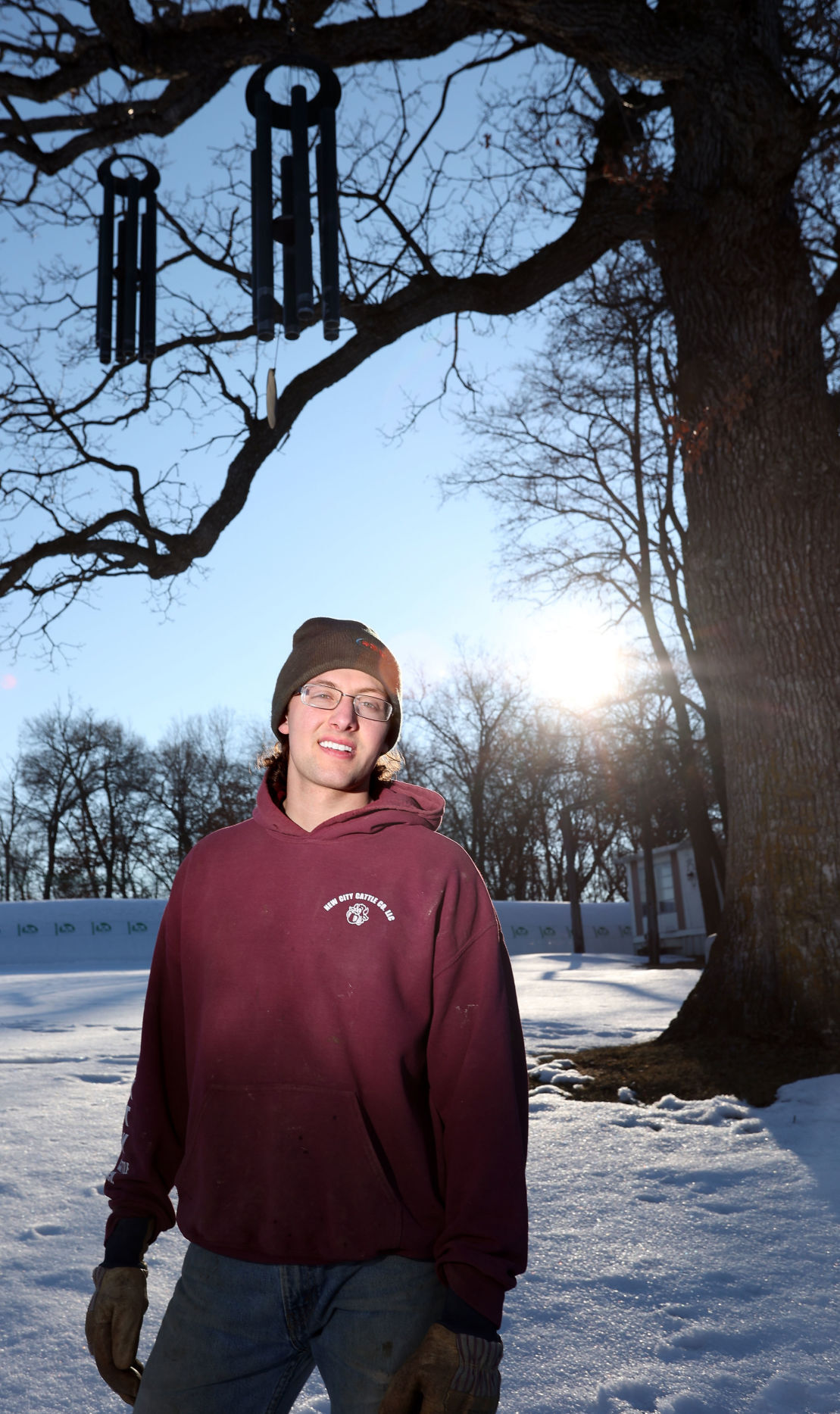 Paulie Hynek, now 22, stands Thursday below a set of chimes his dad Mark hung in an oak tree above where his son was found nearly frozen to death 20 years ago on his Eleva farm. View more photos at LeaderTelegramPhotos.com. 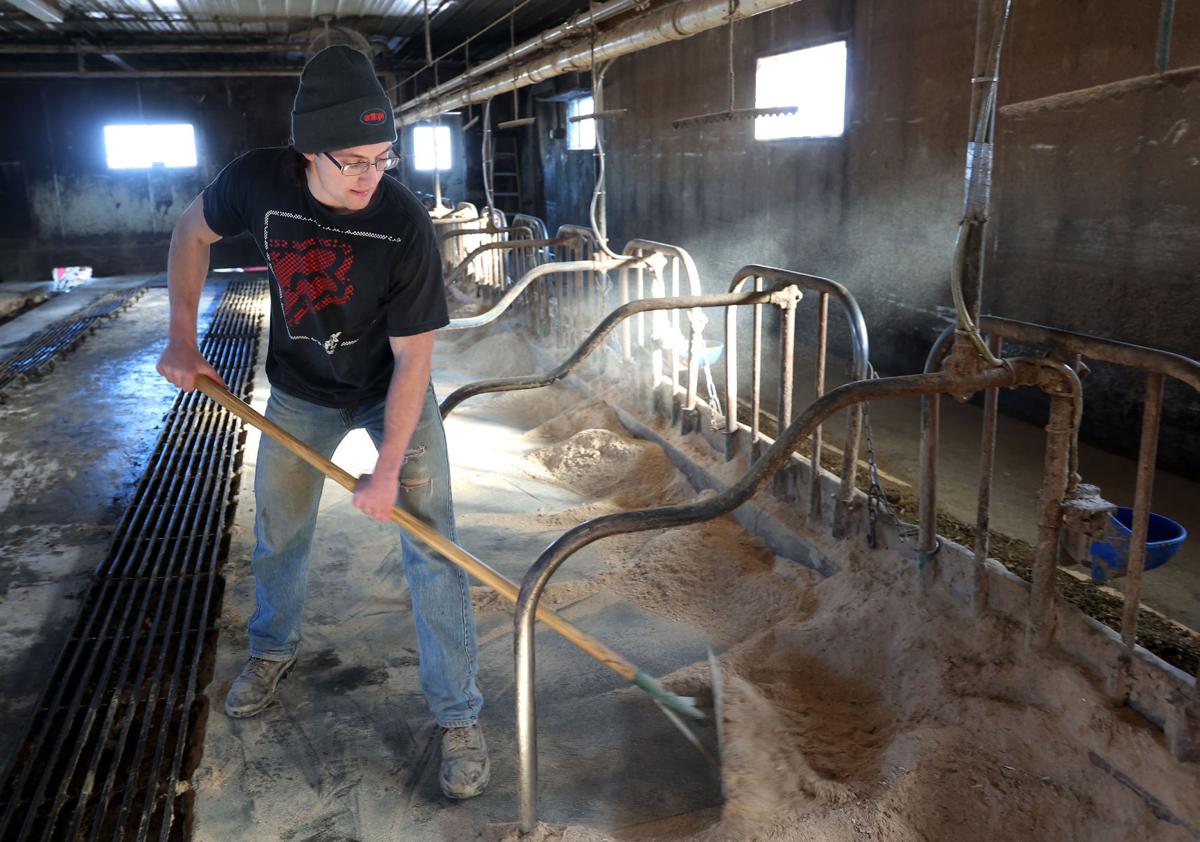 Paulie Hynek, now 22, did barn chores on his Eleva family farm. Hynek was found nearly frozen to death between the house and barn 20 years ago.

Paulie Hynek, now 22, stands Thursday below a set of chimes his dad Mark hung in an oak tree above where his son was found nearly frozen to death 20 years ago on his Eleva farm. View more photos at LeaderTelegramPhotos.com.

Paulie Hynek, now 22, did barn chores on his Eleva family farm. Hynek was found nearly frozen to death between the house and barn 20 years ago.

ELEVA — Les “Paulie” Hynek has told the story countless times of how he survived a subzero night on Feb. 27, 2001. Of course, because Hynek was 2 at the time, he doesn’t remember any of the details himself. While he understands why it has brought him attention over the course of his life, he doesn’t want that night to define him, either.

“People think it’s pretty amazing if they haven’t heard it before,” Hynek said. “To me, it’s not that big of a deal anymore.”

Hynek wandered outside, wearing just a diaper, footed pajamas and sweatshirt. He lay outside for about 3½ hours outside his rural Eleva home in subzero temperatures. When he was discovered, his body temperature had dipped to about 61 degrees. He had no brain activity, and his heart had stopped. The ability of physicians to revive him is another story.

“If I could have been there to watch it, I feel like I was was witnessing a miracle,” Hynek said. “I have to give (the doctors) the biggest thank you. I have to pay my respects to the people who helped me out.”

Hynek was a good student at Eleva-Strum High School; he never suffered any type of mental impairment from his experience. However, he does have some long-lasting physical impairments. Paulie’s father, Mark Hynek, said his son’s body “froze and stunted his growth.”

“My left foot and my left hand are a little bit smaller (than my right),” Paulie Hynek said. “And my left leg is smaller too.”

He didn’t realize his left leg was shorter until he began experiencing hip pain when he was in eighth grade. A doctor pointed out that one leg was longer than the other.

“I put insoles in my shoes, and that makes a difference,” Paulie Hynek said.

“There is no numbness or tingling, but I think there is some arthritis,” he said.

Hynek said he tends to wave his arms when he speaks. He doesn’t do it to draw attention, but he said that is when people often notice his left hand is smaller.

“If I’m out and about, and meet new people, they don’t notice until I say something about my smaller hand, or I’ll crack a joke,” Hynek said. “Then, I’ll tell them the story, and they look at me and don’t believe it.”

While Paulie Hynek doesn’t remember anything from that day 20 years ago, it is etched in the brain of his dad, Mark Hynek. Their child safety measures failed that night, allowing Paulie to get outside the family farmhouse, located about nine miles south of Eau Claire, around 3 a.m. on Feb. 27, 2001. Mark Hynek, realizing his son was missing, searched in the snow and dark until he located him.

“I’m lucky I woke up when I did,” Mark Hynek said. “He was stiff as a board. His mouth was wide open.”

Paulie was rushed to the hospital, but there was little reason to believe he would survive, Mark Hynek said. The heart typically stops beating around 73 degrees, and Paulie was about 61 degrees when he was found.

“They were warming him up, to confirm he was dead,” Mark Hynek said. “They saw the heart make a small quiver. It started beating, and never missed a beat again. Then all of a sudden, he had brain activity.”

Paulie was taken to Mayo Eugenio Litta Children’s Hospital in Rochester, where he stayed until March 20, 2001.

Mark Hynek said his son lifts weights almost daily and other than the shorter hand, leg and foot, his son shows no signs of that night.

A large wind chime hangs from a tree near the area where Paulie was found. It reminds the family daily of the fragility and value of life.