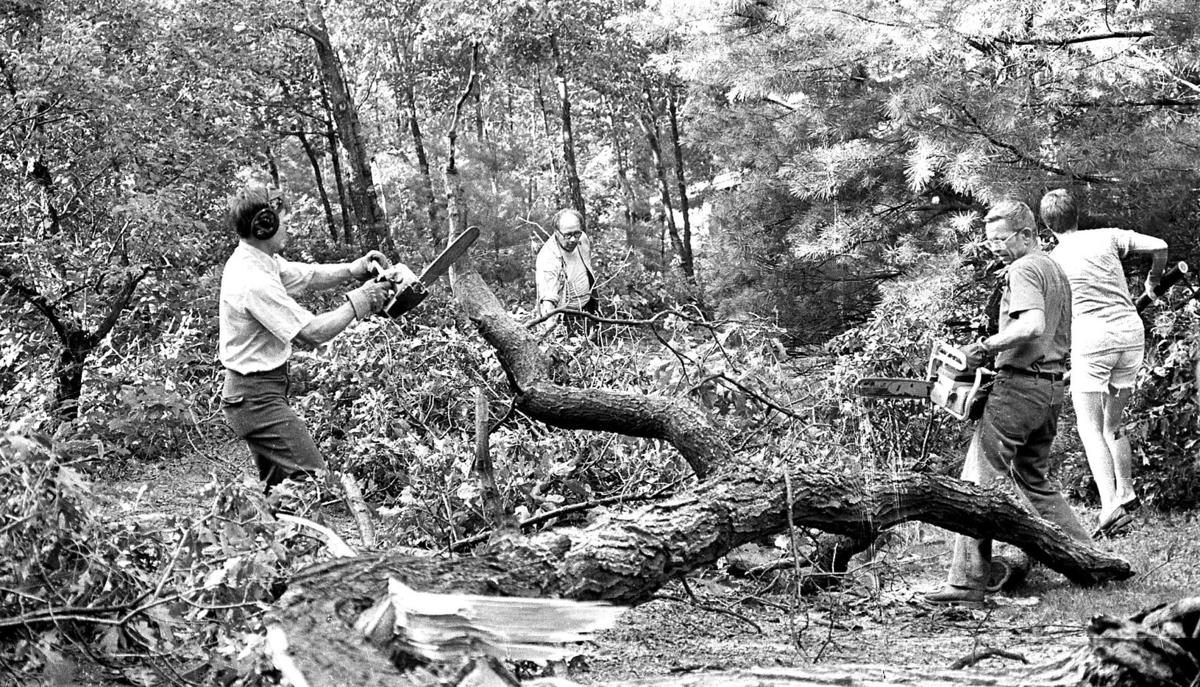 Residents begin sawing fallen trees after a devastating July 15, 1980, windstorm. Today is the 40th anniversary of the storm, which is one of the Chippewa Valley’s best-known weather events. 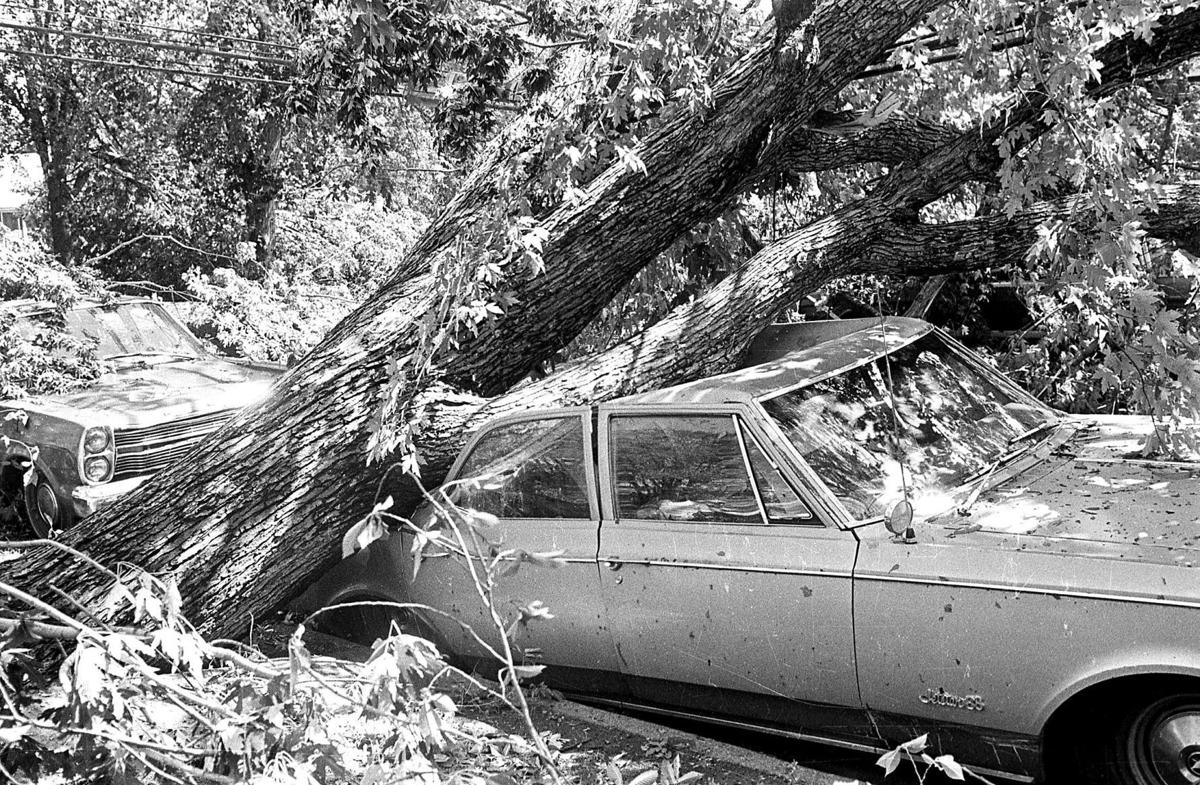 A car is crushed under one of hundreds of downed trees after a July 1980 windstorm that struck Eau Claire.

Residents begin sawing fallen trees after a devastating July 15, 1980, windstorm. Today is the 40th anniversary of the storm, which is one of the Chippewa Valley’s best-known weather events.

A car is crushed under one of hundreds of downed trees after a July 1980 windstorm that struck Eau Claire.

Janell Isaacson-Whitehouse of Eau Claire had just broken her leg in a waterskiing accident.

But crutches didn’t stop her from having a busy summer. She’d turned 16 about two weeks before July 15, 1980, when she and two friends would narrowly escape injury in one of the best-known and most destructive storm events in the Chippewa Valley’s history, a windstorm that would cause more than $150 million in damage and cut power to hundreds of people for over a week.

Today is the 40th anniversary of that storm, conjuring up vivid memories for weather agencies and Eau Claire residents alike.

That night in 1980, Isaacson-Whitehouse and two friends, including 16-year-old Cindy LaRock, caught a 7 p.m. showing of “The Blue Lagoon,” a romantic survival drama starring Brooke Shields, at the mall in Eau Claire.

After the movie ended, the sky was dark. With LaRock at the wheel of a tiny Plymouth Horizon, the three girls headed home, driving north on Clairemont Avenue.

“We were driving by Sacred Heart Hospital, and the sky was crazy,” Isaacson-Whitehouse remembered. “We started seeing lightning strikes hit the ground.”

As the girls drove past Menomonie Street, the wind was starting to blow their small car off the road, and LaRock turned onto a side road. She slammed on the brakes as a tree toppled in front of the car — “about 3 feet in front of us,” LaRock said. She had just gotten her driver’s license that summer.

“We were screaming,” Isaacson-Whitehouse said.

Realizing they weren’t going to make it to their homes on the north side of Eau Claire, the girls saw a house with a light on and pulled into the driveway.

“We plowed into these people’s house, crying and screaming; we probably scared them to death,” LaRock remembered.

“I didn’t even take the crutches,” Isaacson-Whitehouse said. “We just ran and started pounding on the door. The (couple) was kind enough to let us in.”

Followed by a different elderly couple looking for shelter, the girls hid under the couple’s pool table in their basement. LaRock finally was able to call her parents, but before she could tell them she was alright, the phone line went dead.

After the storm passed 30 minutes later, LaRock and Isaacson-Whitehouse dropped off their friend at her west side home, but had to shelter at another friend’s home overnight after they realized they weren’t going to make it to the city’s north side that day.

“There was not one road you could get down,” Isaacson-Whitehouse said. “There were trees covering every road. We had to sit at her house for what felt like days until the roads were cleared to get us home.”

It took LaRock and Isaacson-Whitehouse four or five hours to get home the next day — normally a drive of a few minutes — because so many roads were blocked by trees, downed power lines and debris.

“When I got home our garage had blown over,” Isaacson-Whitehouse remembered. “It was on top of our neighbor’s house.”

“There were lots of hugs and tears,” LaRock said.

LaRock’s family lost power at their house for three or four days. Families and even grocery stores had to throw out their food, she said: “I remember eating a lot of doughnuts and prepackaged foods for a couple days.”

Cleaning up from the storm took weeks, both women said.

Anniversary of the ‘Big Wind’

Forty years ago today, the windstorm — sometimes nicknamed “The Big Wind” — laid waste to the Chippewa Valley between 9 and 10 p.m., downing trees and power lines and ripping up garages and homes.

Wind speeds were measured at 112 miles per hour at what was then the Eau Claire County Airport — before the measuring device blew away, according to National Oceanic and Atmospheric Administration storm data.

The storm was estimated to have caused $159 million in damage in Eau Claire, Dunn, Chippewa and Pierce counties in 1980, the costliest natural disaster in Wisconsin’s history at the time, the Leader-Telegram reported in 2005. A state of emergency went into effect for six days.

Menards owner John Menard told the Leader-Telegram in 2005 that 16 or 17 Mill Run subdivision homes were destroyed or would have to be destroyed, and several residents in Mill Run reported being trapped in their basements by collapsing debris.

It swept over the Twin Cities’ southern suburbs before barrelling toward western Wisconsin, “where it intensified and produced severe damage,” according to the NWS. Four people died in Minnesota and Wisconsin.

The windstorm isn’t considered a tornado, but a downburst or downdraft, involving straight-line winds instead of the funnel-shaped cloud that characterizes a tornado.

Though the storm system began in South Dakota, on the night of July 15, winds flipped a pontoon boat over on a woman in Prior Lake, Minn., drowning her, and nearly 100 mobile homes were destroyed or severely damaged in Lakeville, Minn., according to the NOAA. The storm caused another death and 27 injuries in Wisconsin, and another two people died about a week later from storm-related injuries, according to NOAA storm data.

After seven days, 20,000 people still didn’t have power, according to NOAA.

The agency stated: “About 180 injuries, mostly from power-saw accidents, occurred in cleanup operations in the ensuing two weeks.”

The storm was memorialized by Eau Claire author Lukas Hoffland in his book, “Spearhead Echo: The Storm of 1980,” and by a 2015 WEAU-TV documentary. A group of residents in the 400 block of Lincoln Avenue in Eau Claire even started a tradition of gathering on July 15 every year to socialize and reminisce about the storm.

“It comes up in conversation every July,” she said.