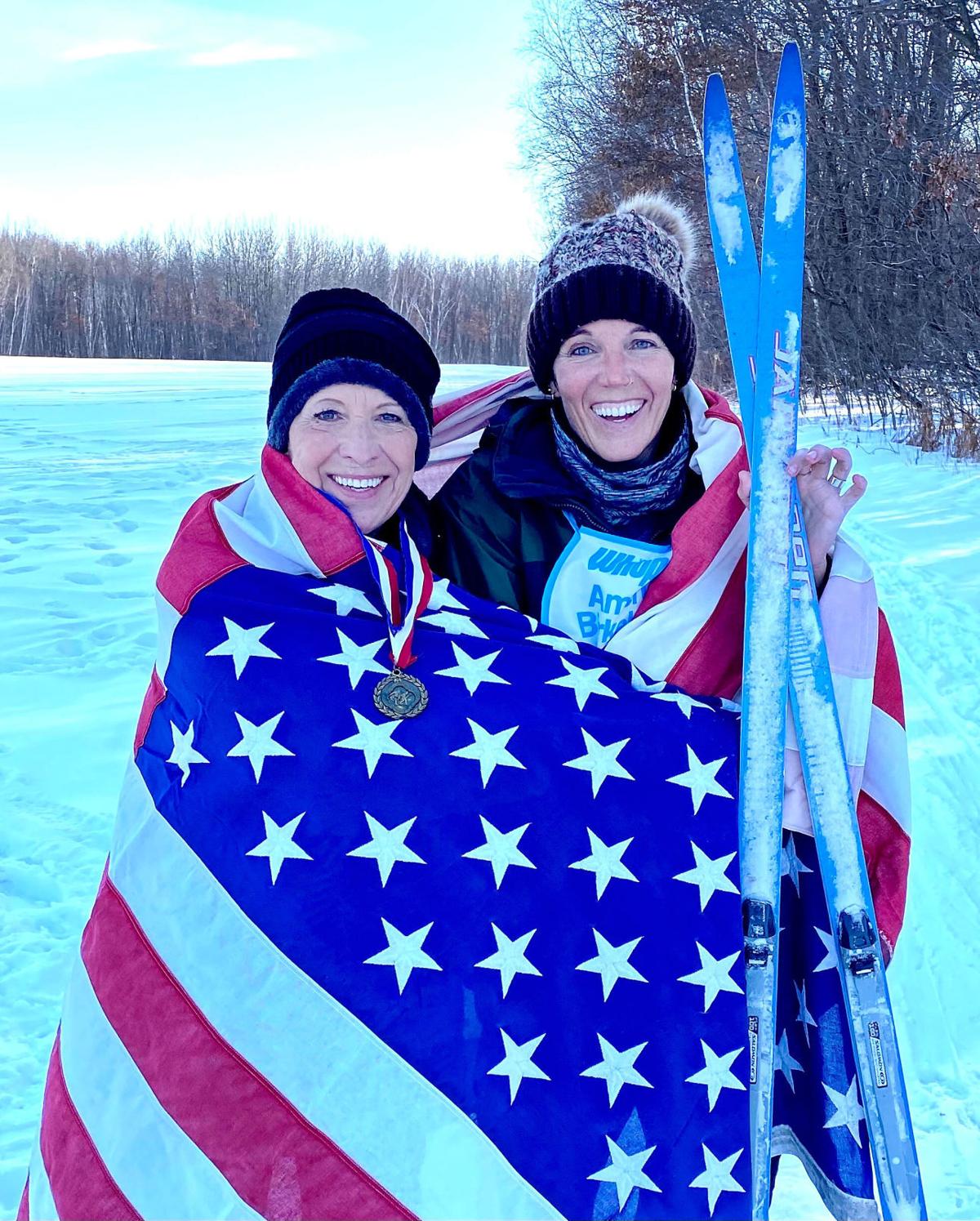 Patti Rufledt and daughter Kristi Gay celebrate after finishing the 43K virtual Birkie on Feb. 20, the one-year anniversary of the death of their husband and father, Mike, who skied five Birkies in the 1980s. They wore his old race bibs and skied on a family-owned trail east of Bloomer, where Patti and Mike had skied hundreds of times. 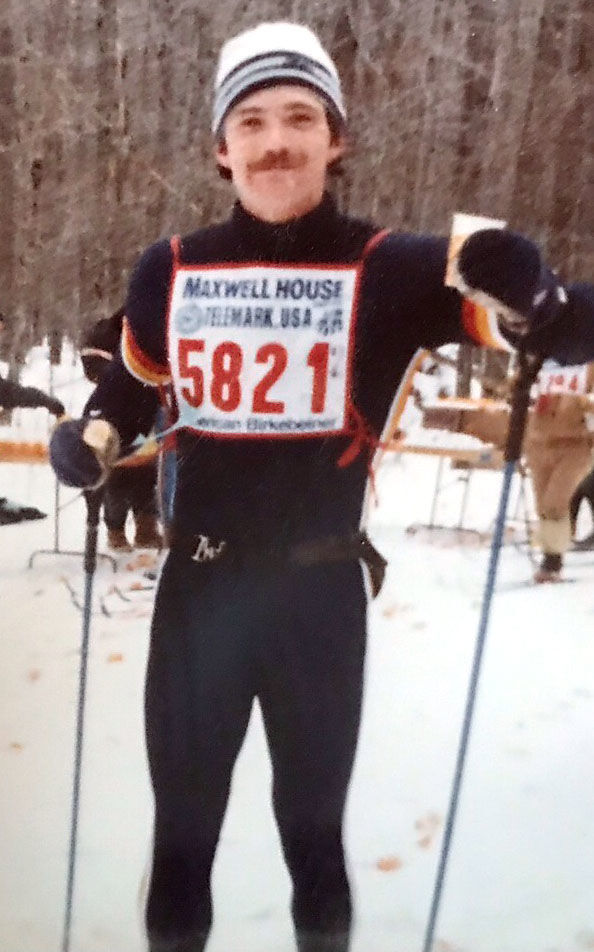 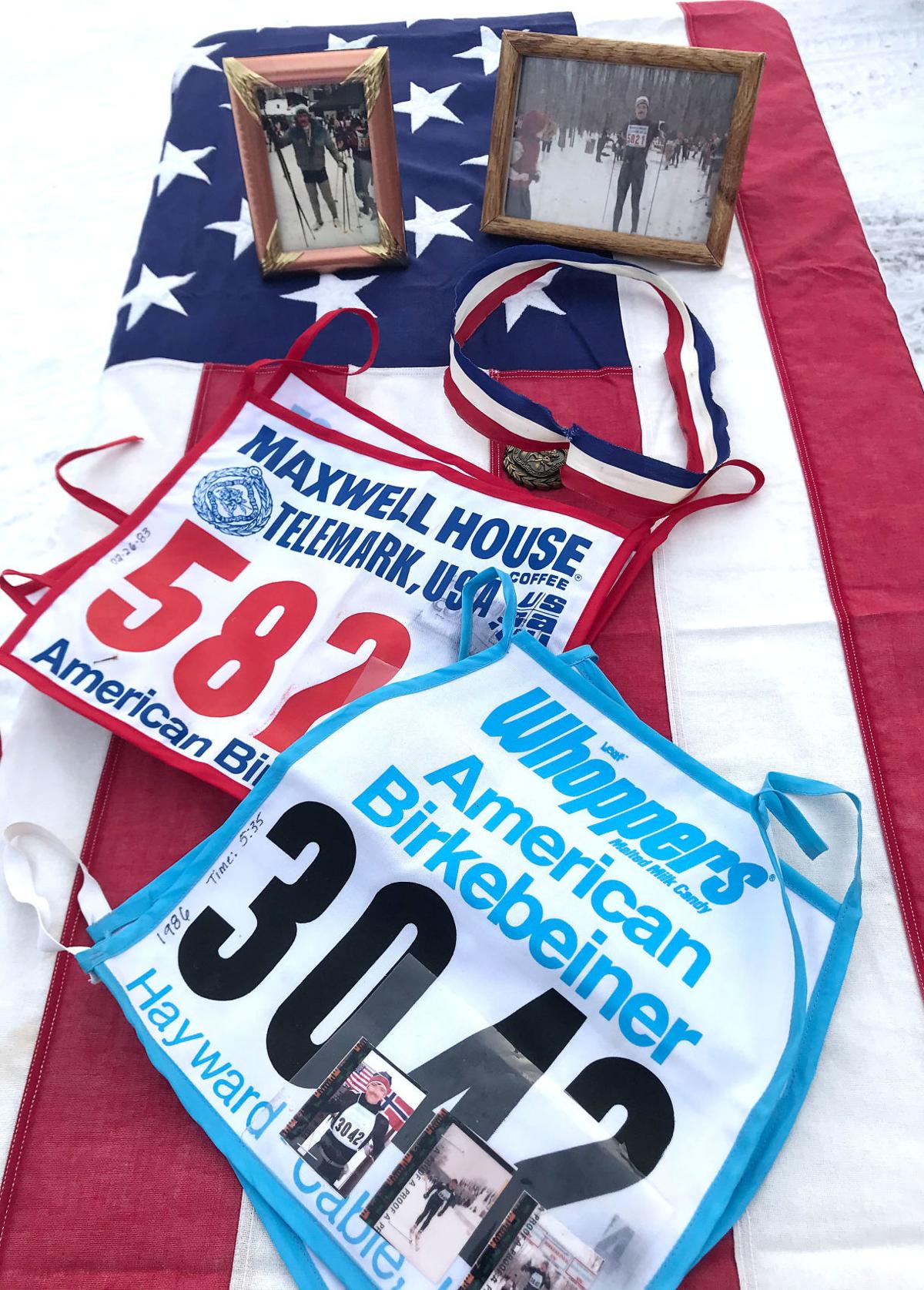 A table with Mike Rufledt’s old Birkie bibs and Birkie medal was set up at the start of the trail where Patti Rufledt and daughter Kristi Gay did the virtual Birkie, near Bloomer.

Patti Rufledt and daughter Kristi Gay celebrate after finishing the 43K virtual Birkie on Feb. 20, the one-year anniversary of the death of their husband and father, Mike, who skied five Birkies in the 1980s. They wore his old race bibs and skied on a family-owned trail east of Bloomer, where Patti and Mike had skied hundreds of times.

A table with Mike Rufledt’s old Birkie bibs and Birkie medal was set up at the start of the trail where Patti Rufledt and daughter Kristi Gay did the virtual Birkie, near Bloomer.

It wasn’t lost on Patti Rufledt and her daughter, Kristi Gay, when they signed up last summer to do the 2021 American Birkebeiner that they had taken on a huge challenge.

Neither had skied the Birkie, a cross-country ski marathon, before. Patti, 66, of Bloomer, had done two half-Birkies, the Kortelopet, but those were years ago. Kristi, 42, of Rice Lake, has run seven marathons but had skied only about 10 times in her life and never more than 10 kilometers, about a fifth of the Birkie distance.

Their motivation to take on the Birkie went beyond the physical challenge. It came from their hearts.

Birkie week this year, they knew, would be the one-year anniversary of the death of Mike Rufledt, Patti’s husband and Kristi’s dad. He died at age 67 on Feb. 20, 2020, about three months after being diagnosed with pancreatic cancer.

“The race was something to anchor us through the milestone of the anniversary and a reason to get out and train, even if it didn’t happen,” Kristi said. “We just wanted a goal in mind to help us get through this time of year.”

They did train, including a fall hiking trip to the Birkie trail to check out the big hills they’d never skied on, but as race week approached they felt they hadn’t trained enough. Then one of Kristi’s co-workers at Rice Lake Weighing Systems mentioned that skiers this year, because of COVID-19, could switch and do the race virtually.

So, come sun up on Feb. 20, the anniversary of Mike’s passing, Patti and Kristi slipped on two special Birkie bibs — bibs that Mike wore when he skied the Birkie five times from 1982 to 1986. And they skied the Birkie on the Three Lakes Trail, a family-owned, 5-kilometer loop a few miles east of Bloomer.

More than eight laps of classic skiing around the Three Lakes Trail and eight hours later, they finished their first Birkies in honor of Mike. Each lap, they took a break and passed a flag-draped table that held two Birkie pictures of Mike, more of his bibs and his first Birkie medal.

“We thought, what a way to honor Mike, do it on the anniversary and then avoid the anxiety of all the people up in Hayward and COVID, so this worked out great,” Patti said.

Birkie skiers can complete the 43K virtual race between Feb. 20 and Sunday, Feb. 28. About 40% of entrants are doing the race virtually while about another 4,900 are skiing on the course spread out over five days from Wednesday through Sunday.

Virtual didn’t mean easy for Patti and Kristi. The temperature was 18 below when they started but warmed up nicely into the 20s. They struggled with their kick wax. They skied the rolling hill loop in reverse twice to break things up.

Mike’s brother, Tom Rufledt, showed up and skied a lap with them. Kristi’s husband, Keith, and daughters Sydney and Sedona came from Rice Lake to cheer them on.

They recorded each lap on a poster as they passed, a way for visitors to monitor their progress. After six laps, close to 19 miles, they were running low on energy. “We had nothing left,” Kristi said.

Then Dick Gladitsch, Patti’s brother-in-law and Kristi’s uncle, showed up with warm water to drink, hot coffee and sugary gum drops, which they stuffed in their pockets and kept eating on the trail.

Gladitsch knew what they needed. A retired Bloomer family practice physician, he has skied 35 Birkies and his wife, Mary, 29 Birkies. He also knew the Three Lakes Trail – he built it in 1985 with late friend Dave Landgraf, a Bloomer teacher and Birkie founder. Dick Gladitsch, neighbor Gary Kramschuster and others have kept it groomed over the years and open to the community, including the Bloomer High School ski team.

Patti and Kristi crossed their finish line at 3:10 p.m., but there was no time to celebrate the accomplishment. A 4 p.m. service at St. Paul’s Catholic Church in Bloomer was dedicated to Mike. Tired and sore, they showered quickly and went to church, then a family dinner afterward also in honor of Mike.

“Everything hurt, and it was a struggle to eat. But we were so happy to finish and proud of ourselves,” Kristi said.

They kept track of their distance with two Apple watches and two fitness apps on their phones; thankfully they had more than one because three of them lost power in the cold. Reporting their time will give them official credit for finishing the race.

Patti and Kristi chose a physically difficult day over what otherwise would have been an emotionally difficult one. “It put a real positive spin on the day,” Patti said.

Mike, a UPS driver in Eau Claire for 35 years then for Groome Transportation in retirement, espoused positivity and had boundless energy. When Kristi ran her first marathon in Madison years ago, Mike jumped in and ran with her the last nine miles.

Along with five Birkies, Mike completed Grandma’s Marathon, the Bloomer Triathlon several times and other races over his lifetime. He played football for UW-Eau Claire his freshman year, Patti said.

Mike loved to deer hunt and turkey hunt. He wasn’t feeling well a couple of weeks before the 2019 gun deer season and went to the doctor. He was in his tree stand when he got a call that he had stage four pancreatic cancer.

Although the disease took him quickly, he never complained.

“He was a real inspiration. He talked the last few weeks about how it’s hard to be sad if you’re grateful for what you have and what you’ve had,” Patti said. “It was never, ‘Poor me.’ It was always, ‘I had a good run and why not me?’”

Kristi said her dad was the strong one through it all. “He carried all of us through that sickness. He was at peace.”

He invited everyone he knew to say goodbye. “It was really something. The door was opened and closed all day long with people from his work, family, friends,” Patti said, adding that he also talked about his unwavering faith in God to those who visited and very likely change some people’s lives.

Patti and Mike began dating at Cornell High School. He graduated in 1971 and she in 1972. They were married in 1976. Along with Kristi, they also have a son, Paul, of Eau Claire.

Kristi remembers her dad as a hard-working man who loved life, every minute of it.

“He was just jolly. He smiled and laughed the entire time you were with him. He just appreciated everything in life, his whole life,” Kristi said.

On a day when Patti and Kristi could have lamented losing Mike, they chose to be like Mike. Positive and energetic. They finished the Birkie.

Poling is a freelance writer from Eau Claire.