Apartments priced for low-income residents make up the marjority of Phase 2 of The Current, a housing complex in Eau Claire’s Cannery District. The first phase of the development, seen in the right edge of this image from architectural firm Angus-Young, created market-rate apartments. 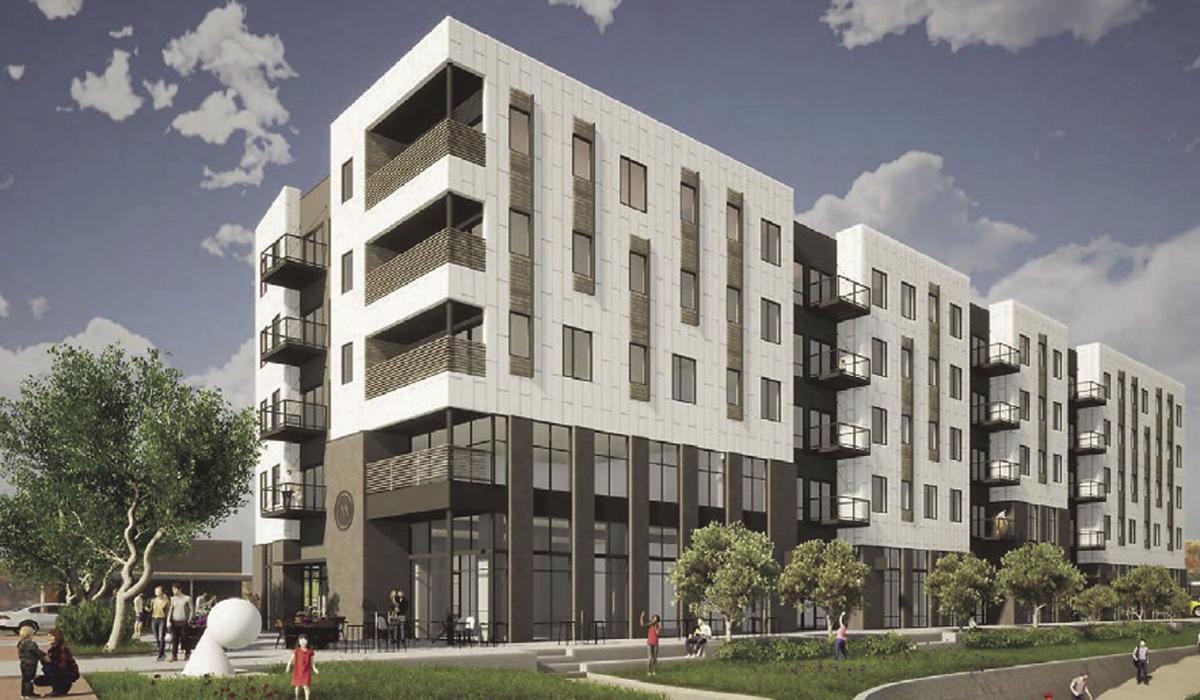 Merge Urban Development is planning to build this five-story building on land currently used for public parking along the Eau Claire River in downtown Eau Claire.

Apartments priced for low-income residents make up the marjority of Phase 2 of The Current, a housing complex in Eau Claire’s Cannery District. The first phase of the development, seen in the right edge of this image from architectural firm Angus-Young, created market-rate apartments.

Merge Urban Development is planning to build this five-story building on land currently used for public parking along the Eau Claire River in downtown Eau Claire.

As construction of one apartment building wraps up in Eau Claire’s Cannery District, a second building that will feature units priced for low-income residents is seeking city approval.

The first building along North Oxford Avenue in what was initially called Cannery Trail Residences, but now goes by The Current, is slated to open in September, according to a memo from developer W Capital Group.

The Madison-based developer will lease those 71 apartments at market rate, but the second building will have 85% of its units intended for people making below Eau Claire County’s median income level.

Of the 43 apartments in the second building, 36 of them will be set aside for individuals making 30% to 60% of that local median income. According to the Census Bureau, the median household income in Eau Claire County was $55,711 in 2018, the most recent figure available.

The building will include studio, one-, two- and three-bedroom apartments. The apartment complex also has underground parking, a community room, patio area, a fitness center, lobby, storage units and security cameras.

Plans for the apartment complex won the city’s approval last year, but changes to the designs for the second building require a new round of approvals.

Originally designed as a three-story building, the architect found that a partial fourth level was necessary to accommodate all of the apartments.

The Eau Claire Plan Commission will vote during its 7 p.m. Monday meeting on the amended site plan and rezoning requests.

Following the commission’s decision, the project would then proceed to a public hearing in front of the City Council on Aug. 10 before a deciding vote on Aug. 11.

The project received $483,430 in low-income housing tax credits in April. Those tax credits require that rents stay low enough in the second building so low-income residents can afford them.

The city has agreed to provide up to $800,000 in incentives to the developer for hitting certain benchmarks for building progress and maintaining affordability. Progress on the first building has made the developer qualify for the first $250,000. When tenants move in, another $50,000 will be awarded.

The remaining $500,000 in city incentives are tied to the second building, with $200,000 specifically for meeting affordable housing quotas.

A five-story mixed-use building planned for land currently used as a downtown public parking lot is seeking the city’s approval.

The city Plan Commission will vote Monday night on a rezoning request and designs that Merge Urban Development of Cedar Falls, Iowa, submitted for its Andante project. This project also will require a public hearing on Aug. 10 and City Council vote the following day.

Plans submitted to the city show 8,600 square feet on the ground floor for a restaurant, retail shops or other businesses. The remaining four floors will have 76 apartments ranging from studio, one- and two-bedroom units. There will be 41 stalls of underground parking, but the building would also make use of surface parking and spots in a nearby city-owned parking ramp.

Land where the building is planned to go is currently a public parking lot along the Eau Claire River between North Farwell and North Barstow streets. The city signed an agreement a year ago with Merge with the intention of the developer to build there.