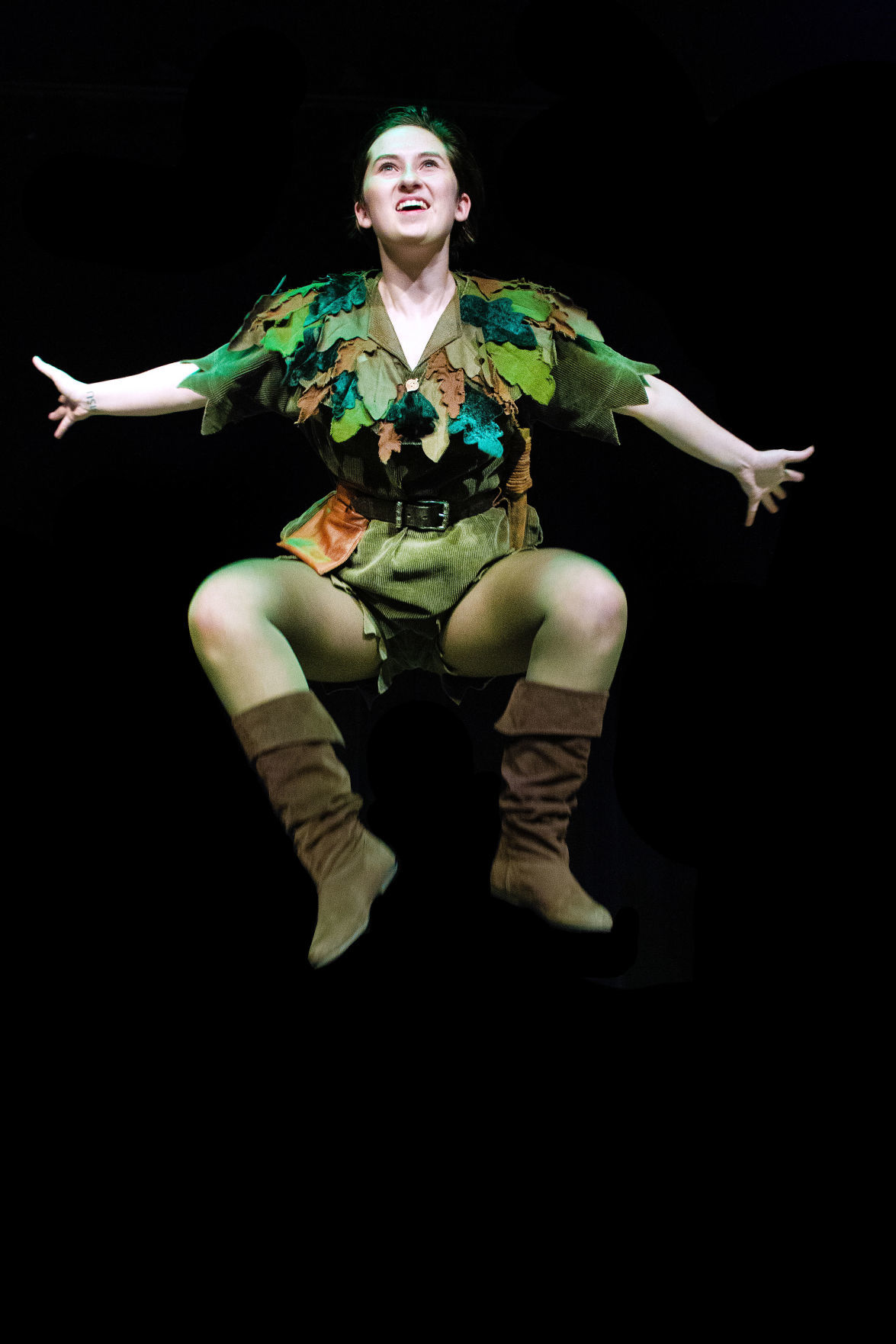 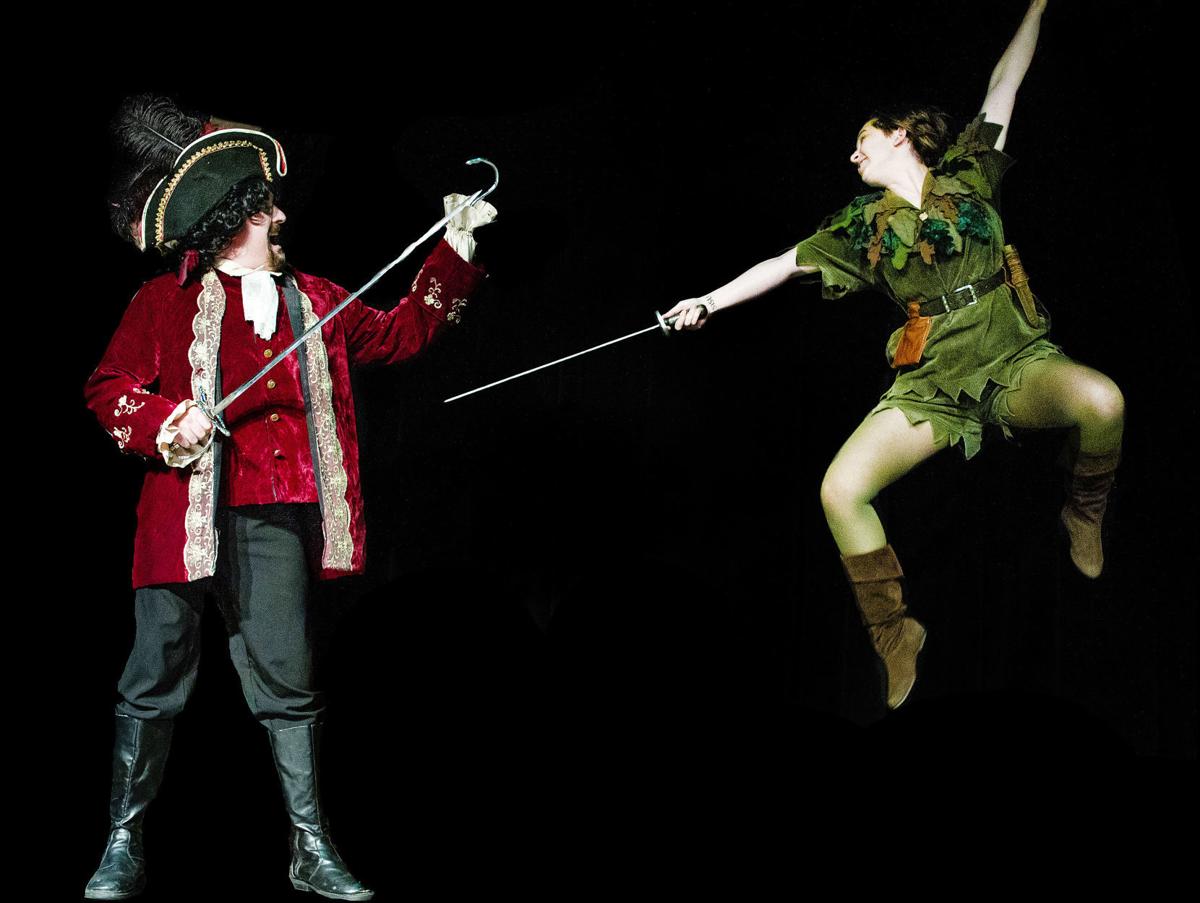 Uplift is among the reasons we attend theater productions, but in the case of “Peter Pan,” that applies in a literal as well as emotional sense.

Thus, the sight of actors flying above the stage likely is among the attractions for those who attend the Eau Claire Children’s Theatre’s latest production of the musical, opening Wednesday in Pablo Center at the Confluence’s RCU Theatre. It’s why the company is presenting “Peter Pan” for the fourth time — making it among the few shows the group has group has performed multiple times. It’s also why the group has chosen it for the final bow of its 30th anniversary season.

“I think as far as the musical itself, the stage show, it’s the flying that attracts most people,” said Allie Kangas, who is portraying the iconic boy who vows to never grow up. “A lot of people want to see a person fly into the air because that’s not normal.”

As Kangas implied, the story holds a special place for many in part because of the sheer number of literary, stage and screen efforts. They include Sir J. M. Barrie’s play, Broadway productions featuring legends Mary Martin and Cathy Rigby, the Disney animated adventure, the 2014 live television special starring Allison Williams, plus film spinoffs of the story for films such as “Hook” and “Finding Neverland.”

In most of those cases, it’s the flying that helps cast its spell.

Wayne Marek, director of the production and Children’s Theatre executive director, knows from leading the group’s other “Peter Pan” stagings how the flying, literally, goes over with the audience.

Marek also pointed out other elements that make the show an appropriate choice to restage as well as close the season.

Describing the attributes sought for this place on the schedule, Marek explained, “It always tends to be the very largest of the musicals you can put out there. ‘Joseph and the Amazing Technicolor Dreamcoat,’ ‘Music Man,’ other types of shows we’ve done in the summer tend to be big casts, large orchestra, multiple sets, having kids and adults in the show.”

In this case, Marek said, “Peter Pan” has a 60-member cast and 27-piece orchestra. He also mentioned the spectacle of flying children and adults, for which they are hiring flying effects company Vertigo, based in Cortland, Ill.

Cast members elaborated on the reaction such a special effect elicits from audiences — and themselves.

“I personally have been excited about flying since before I was even cast,” Kangas said. “It’s like a bucket list item so I m personally very excited for next weekend.” (She was referring to when the flying effects company arrives in town.)

“I am very excited to be flying,” she said. “It’s one of the fist things that you’ll hear about. ‘Why should you come? Well, there’s going to be flying.’

“It’s so cool when you’re in the audience too,” she continued, “because you see they’re up in the air and they’re just doing, they’re thing having fun. It’s really going to be awesome.”

Tennisha Sonsalla, cast as Tiger Lily, the princess who lives on Neverland, noted the effect the airborne escapades have on younger audience members.

“I personally think the coolest thing about the flying in the show is that all of the kids in the audience, from their perspective, that’s real,” she said, adding: “like they actually think people are up there flying, and I really think that’s what brings the magic to the show.”

Jessica Yentsch, portraying Mrs. Darling, looked at it from the standpoint of adults as well as children.

“Flying is something that I think a lot of people dream about being able to do — so being able to see it on stage and kind of living your dream through someone else’s eyes,” she said.

Joe Burger, taking dual-adult roles of Mr. Darling/Captain Hook, suggested the audience will be impressed at the technical wizardry that gets the actors above the stage.

“I think its scarily real when you watch it on stage,” he said. “It’s illusion, but it isn’t an illusion as in you’re standing on something. These actors or performers are being pulled around on pulleys. We’re bringing in an entire flying company to help set this up. And in such a short amount of time and short amount of rehearsals, it’s amazing what is accomplished on stage.”

“I am really excited to fly,” he said. “And I feel like it adds that little bit of magic to the whole show. It starts off on really good note, it brings everyone into the show, and everyone likes it and everyone is looking forward to the show.”

Of course, the flying isn’t the show’s sole drawing card, the actors pointed out.

Brenner suggested the treasured memories many have of the animated film.

“So anyone who knows the movie and watched that movie when they were kids is going to want to bring their kids,” she said.

For Sonsalla, the appeal derives from an idea explored in the tale.

“I guess I would say it’s the timeless story line, timeless theme,” she said. “The idea of growing up is just something I feel people have a really hard time wrapping their heads around, and it’s something we get to explore every time we do the show.”

Yentsch cited one of the best-loved creations of the musical.

“The magic of it,” she said, “because everyone wants to believe in a little magic.”

Burger has found that the production reaches audience members from across generations.

“I think it does kind of bridge that gap between adolescence and adulthood where we kind of let go of our imagination,” he said, “and allow that to drive us and then realizing that we do have to grow up or do have responsibilities. It’s kind of fun to reflect on that whether you’re an adult or a child.”

Wright brought up one of show’s most prominent elements.

On the subject of refusing to grow up, Kangas brought up the wide age range who might see the appeal of that sentiment.

“I know as a new adult myself, I don’t want to grow up anymore,” she acknowledged, going on to say many might be attracted to “the idea of going back to a simpler time when we really had no cares in the world and all we really wanted to do was go outside and run around and play.”

Which is perhaps why “Peter Pan” continues to be revived: It may not permanently take away the cares of the real world, but it certainly offers a chance to take flight from them for a while.