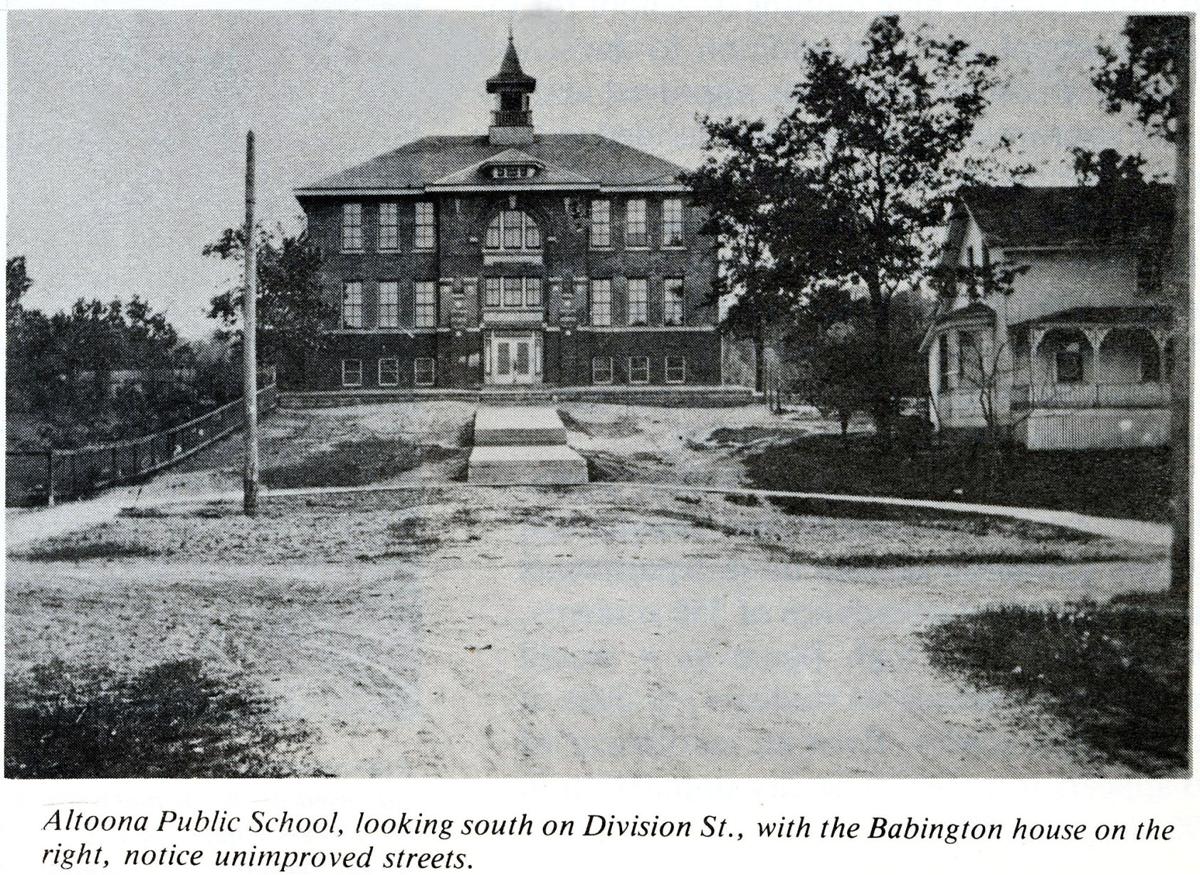 The Altoona Public School was built in 1911 on the 400 and 500 block of Division Street. The two-story building with eight rooms housed all grades through high school. It burned down in 1951. 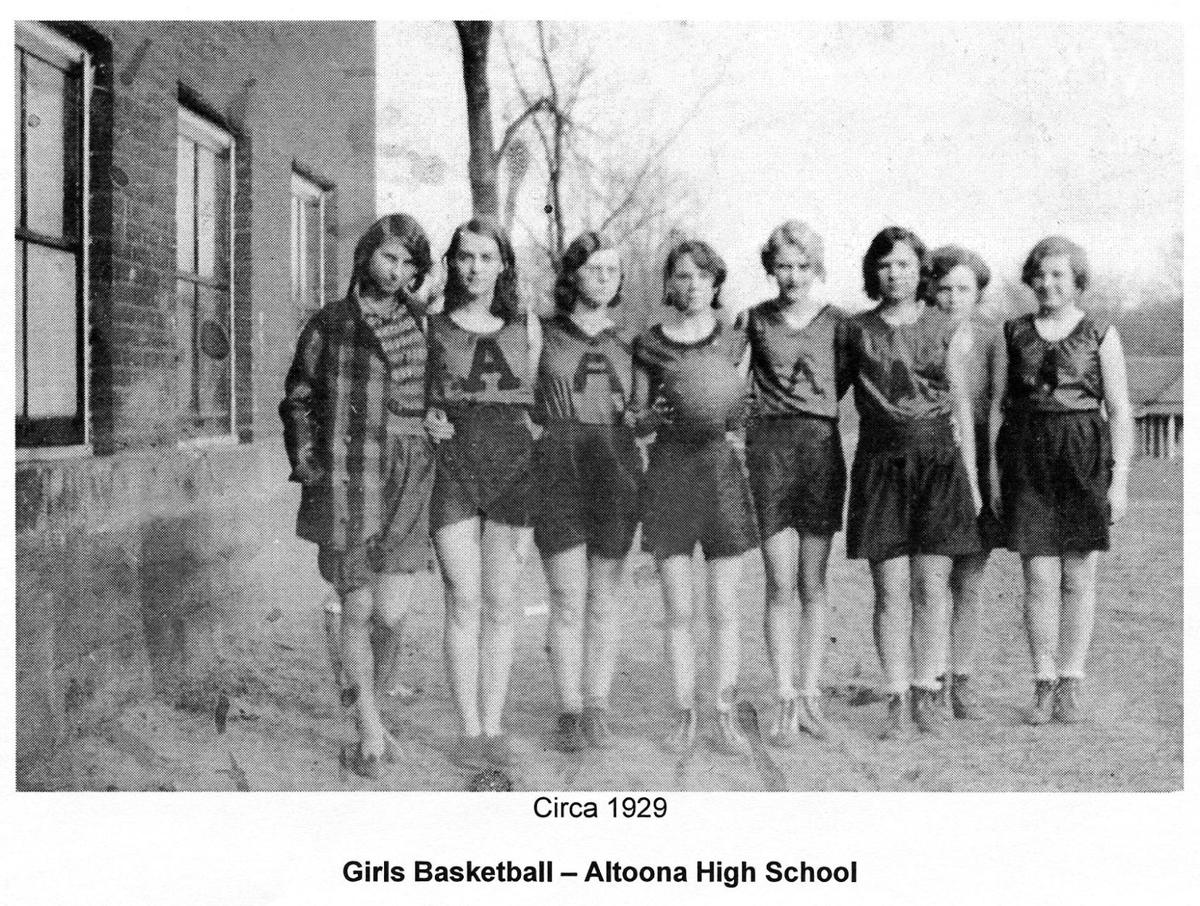 Altoona started a girls athletics program, including basketball, in 1922, but by 1929 the program was halted as the Wisconsin Interscholastic Athletic Association prohibited girls from playing sports. The rules were changed in 1964 to allow for girls sports. This photo is from around 1929.

The Altoona Public School was built in 1911 on the 400 and 500 block of Division Street. The two-story building with eight rooms housed all grades through high school. It burned down in 1951.

Altoona started a girls athletics program, including basketball, in 1922, but by 1929 the program was halted as the Wisconsin Interscholastic Athletic Association prohibited girls from playing sports. The rules were changed in 1964 to allow for girls sports. This photo is from around 1929.

ALTOONA — One hundred years after her grandmother became the first graduate of Altoona High School, Ann Sturz will celebrate the only graduate of the class of 1915.

“She was the valedictorian, salutatorian, tallest, shortest,” Sturz, who graduated from Altoona High School in 1960, said of Emma R. Duncan.

Duncan, Sturz and other graduates of the high school will be remembered Saturday at an all-classes school reunion to celebrate the 100th anniversary of its first graduate.

Sturz has been a loyal alumni member, and her family has been loyal to the school with five generations graduating from Altoona High School.

“It’s a family tradition,” she said. “You must graduate from Altoona.”

Don Winrich, the president of the Altoona Alumni Association, is among four generations of Altoona graduates in his family. Winrich’s mother, Jeanette Zachau, 96, is the oldest living Altoona High School graduate.

Zachau spent her scholastic years at Altoona Public School, which was built in 1911 on Division Street and housed students in kindergarten through high school.

The main floor of thatbuilding consisted of a few classrooms and a gymnasium, while the upper floor had a room for seventh and eighth grades and another for the high school students. Elementary school was in the basement.

“She was a really strict teacher, and she taught us penmanship,” Zachau recalled. “Very good. Very strict.”

Zachau’s other most memorable teacher was principal Jesse Jensen, who oversaw the high school.

“I was deathly afraid of him,” Zachau recalls. “He always had a platform he sat on and watched all of us.”

Jensen also was the coach for the basketball team and forbade any of his players from smoking.

“He would go around and make sure there were no boys on the streets smoking,” Zachau said.

“He also threw the fear of God in everybody,” he said. “But he was also loved by everybody.”

The 1911 school building burned down on Oct. 31, 1951, and for the rest of the academic year students attended school either at the Eau Claire YMCA or the old Altoona auditorium, where the basketball team played.

“I remember my mom waking us up that morning saying ‘There will be no school today. The school is burnt down,’ ” said Donald Wittren, who graduated in 1956.

After a referendum was passed, a new school was built in 1952 at the site of the current high school building on Seventh Street West.

“All us students were just hoping and praying that the referendum was passed because otherwise we would have to go to (school in) Eau Claire,” he said.

Fredrick “Fuzzy” Thurston, who went on to fame as the left guard for Vince Lombardi’s Green Bay Packers of the 1960s, graduated from Altoona High School in 1951.

Thurston didn’t play football during his time in Altoona because, except for a short stint in the 1920s, Altoona did not have a football team until 1962. Instead, Thurston ran track, played basketball and sang in the boys choir, according to the 1951 Altoona High School yearbook.

“He was a big, strong guy,” Wittren said.

Both Wittren and Larry Sturz, Ann Sturz’s husband and a 1959 Altoona graduate, played basketball for the Altoona Railroaders in the old Altoona auditorium.

“That floor was so small that the free throw circles actually overlapped the center circle,” Wittren said.

The 2015 Altoona High School class had 100 graduates, but Superintendent Connie Biedron believes the school still offers the same small school advantages it did a century ago.

“Even as we grow, we want to keep that small-school atmosphere, that community spirit,” Biedron said.

The Alumni Association does its part, raising as much money as it can for the school every year and giving scholarships to new Altoona graduates headed to schools beyond high school.

“The school is the center of the community,” Biedron said.