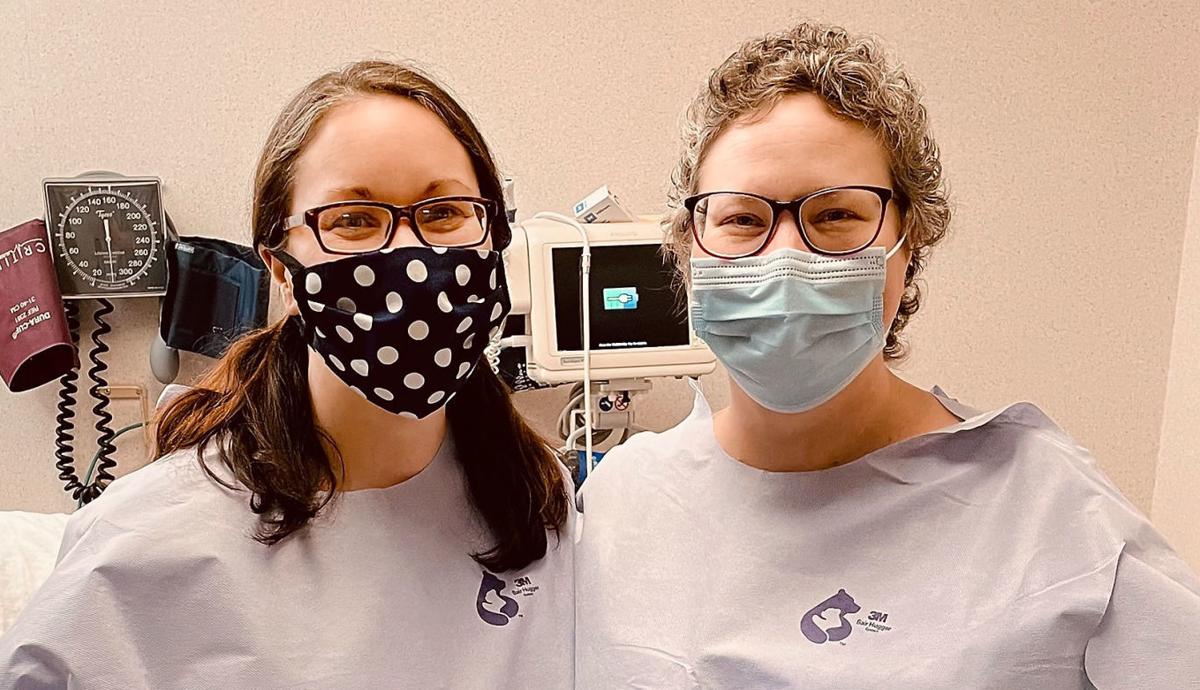 Beth Vrablic, right, of Chippewa Falls received a kidney in February from her sister, Lana Ciolkosz of Thorp, at Mayo Clinic in Rochester, Minn. Vrablic hopes to return home this week. 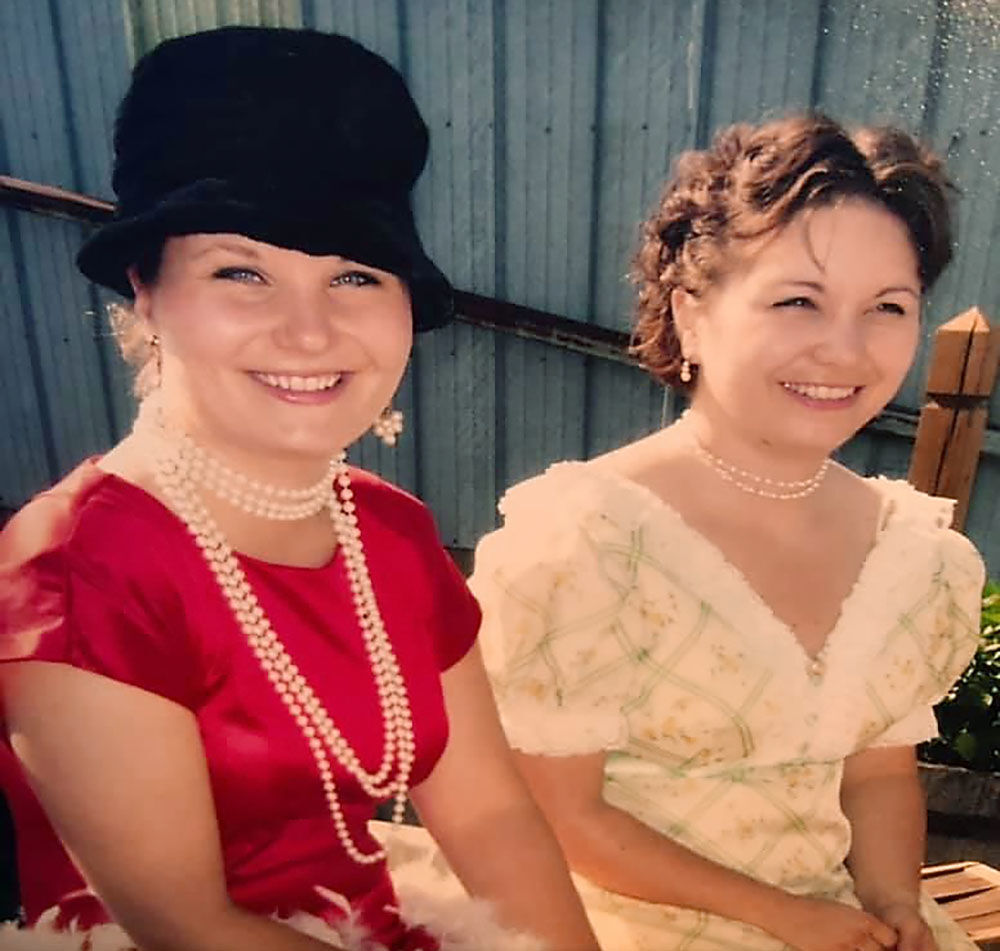 Sisters Beth Vrablic, left, and Lana Ciolkosz have been sharing items since they were young girls. Ciolkosz donated a kidney to Vrablic last month. 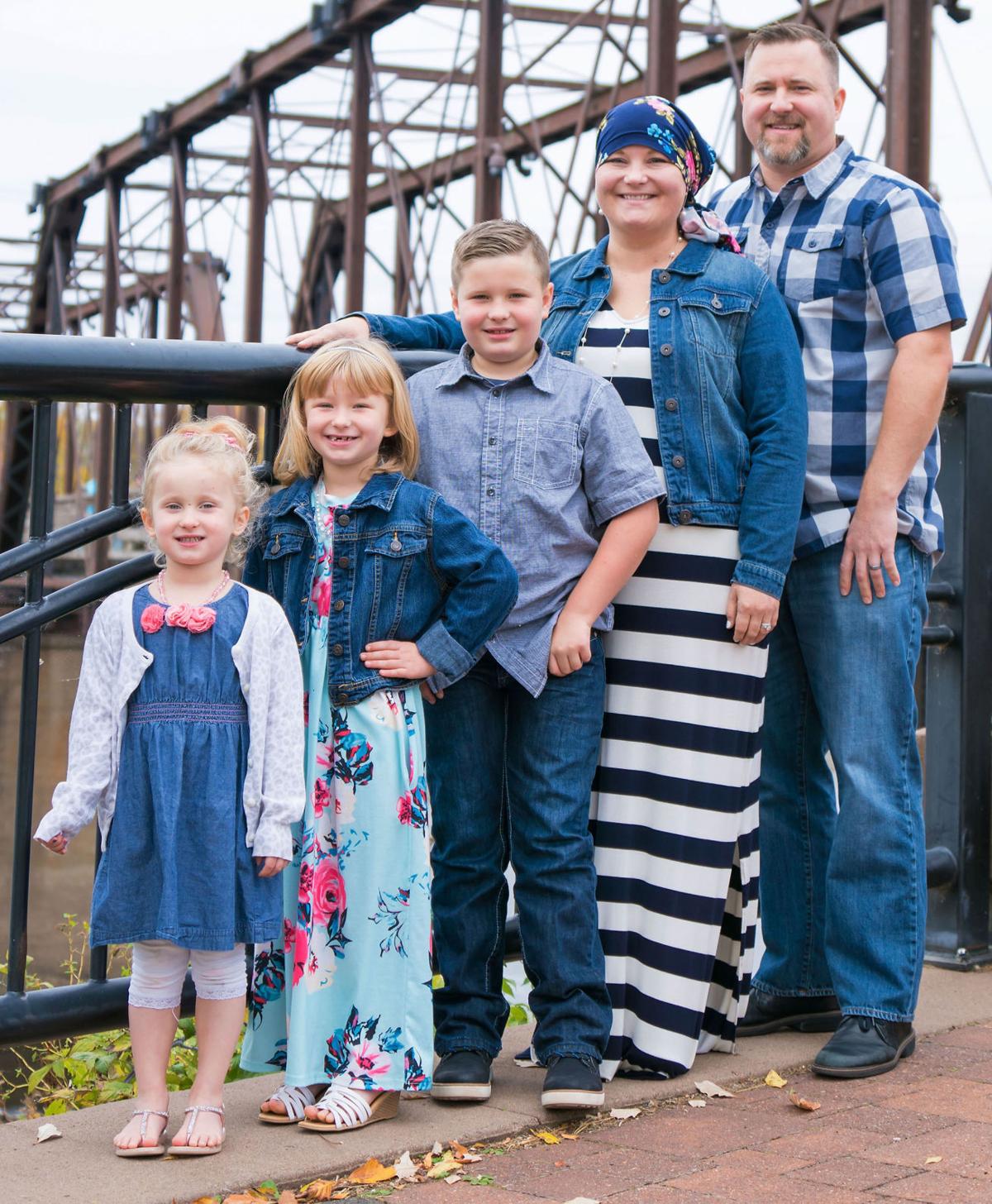 Beth Vrablic and her husband, Eric, pose in 2020 with their three children, from left, Selah, Myra and Merrell. 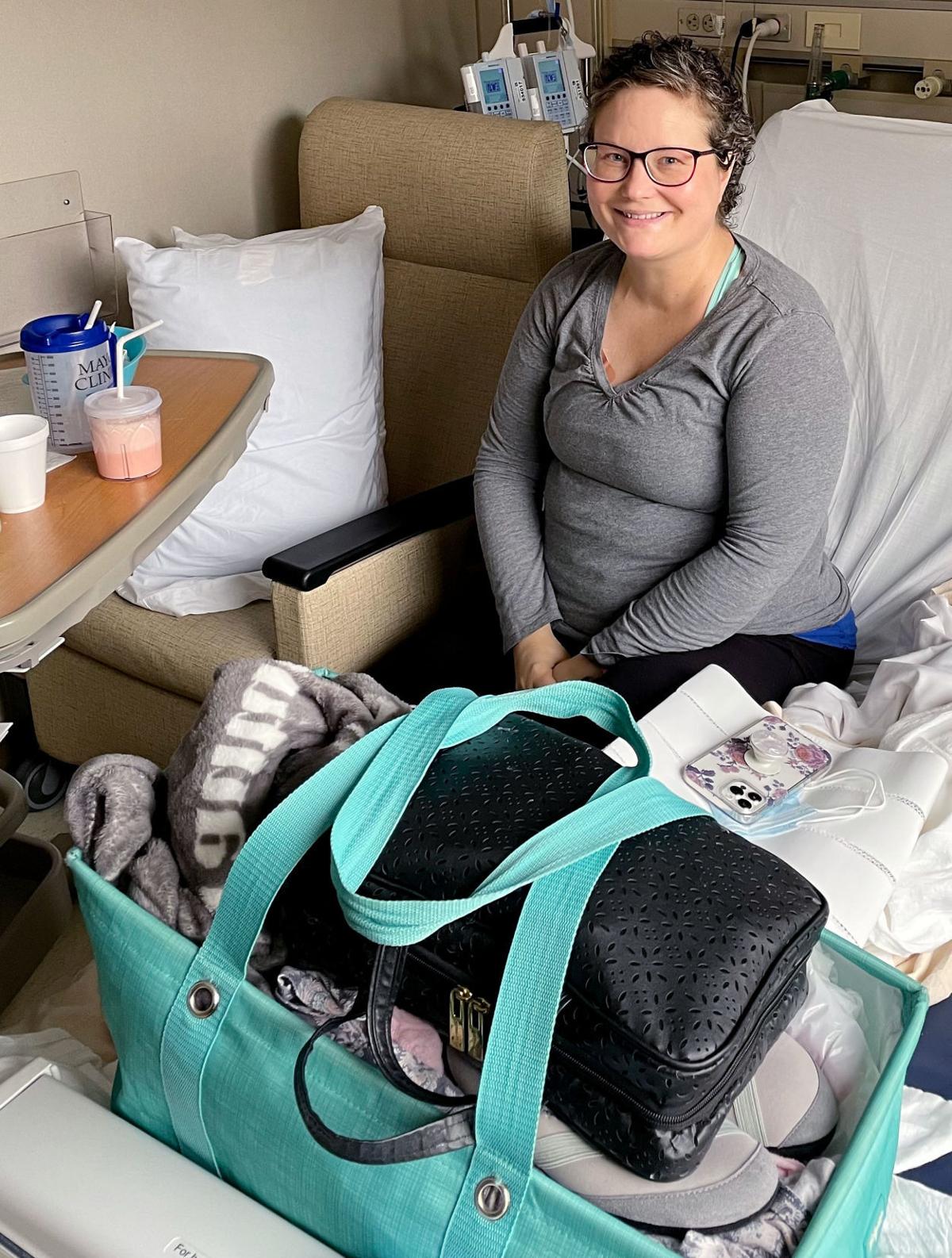 Beth Vrablic of Chippewa Falls sits in her hospital bed at Mayo Clinic in Rochester, Minn., as she awaits discharge following a recent kidney transplant surgery.

CHIPPEWA FALLS — From clothes to secrets, sisters Beth Vrablic and Lana Ciolkosz have been sharing stuff their whole lives.

Though they each had their own bedrooms growing up in Thorp, the sisters even shared Ciolkosz’s room so they could transform Vrablic’s room into “Barbie world.”

Three weeks ago the pair took their generosity to new heights when Ciolkosz donated one of her kidneys to Vrablic to ensure they could continue their sharing ways for many years to come.

Vrablic expects to return to her Chippewa Falls home Wednesday, taking the last leg of a 4½-year health journey in which she has overcome incredible odds by surviving septic shock, a coma, bone marrow cancer, multiple amputations on her feet and kidney failure.

Vrablic’s health challenges began modestly, with a bout of fatigue in the weeks after giving birth to her third child in 2016.

A seemingly healthy office manager at the time caring for a 2-week-old, a 2-year-old and a 4-year-old, Vrablic figured her full plate explained why she was feeling worn down. The reality was she was going into septic shock.

“All of a sudden I went from living life to waking up in a hospital room,” she said. “I went from sick to (temporarily) dead in 17 hours.”

Vrablic slipped into a 10-day coma on Oct. 25, 2016, and doctors prepared family members for the worst. Staff at Mayo Clinic Health System in Eau Claire revived Vrablic once and warned the family she may not survive, recalled Ciolkosz, 42, of Thorp.

“All I could do was blink to communicate with anybody,” Vrablic said.

After the initial shock of seeing a paralyzed and nearly unrecognizable Vrablic, the family scrambled to make emergency arrangements for the children.

“We started out making plans for the next 24 hours and then realized it was going to be weeks and that turned into months and then into years,” Ciolkosz said.

Vrablic remained in the critical care unit at Mayo in Eau Claire for 45 days, and it was during that time doctors determined she had failing kidneys.

When she finally was able to go home 2½ months later, Vrablic said it took a large crew of friends, family and volunteers to take care of her and her children.

Over the next several months, Vrablic watched as several of her toes and parts of her feet turned black — a process she called natural demarcation in which the body indicates where dead and live tissue meet. That led to six amputation surgeries that have left her with just the big toe on her right foot, although she has learned to walk again with the help of a leg brace.

In the same week of March 2018, Vrablic walked for the first time in 17 months — giving her hope the nightmare was nearing an end — and then was diagnosed with amyloidosis, a rare disease that occurs when an abnormal protein builds up in a person’s organs. The proteins jammed up Vrablic’s kidneys to the point where her kidney function dipped to 15%, explaining what caused her septic shock.

In October 2018, she went to Mayo Clinic in Rochester, Minnesota, to have her stem cells harvested before she started chemotherapy treatment for the amyloidosis. At that time doctors discovered she also had multiple myeloma, or bone marrow cancer. Eventually, it was determined she needed to have her cleansed stem cells transplanted back into her body. Vrablic underwent that procedure in April 2020 in Rochester, putting her disease and cancer in remission and making her a candidate for kidney transplant.

By July, when she finally could get out of bed without throwing up, Vrablic was ready to start thinking about finding a kidney donor. She desperately hoped to avoid joining the nearly 100,000 Americans awaiting a kidney on the national organ transplant waiting list. She faced the prospect of waiting about five years — the average — for a kidney from a deceased donor unless a living donor emerged.

Doctors advised her to begin the search with siblings, as they have the highest odds — 25% — of being a match.

Ciolkosz had offered to potentially donate a kidney to her sister when the health crises began, but Vrablic’s altered state didn’t even enable her to remember the exchange. So it came as a wonderful surprise when Ciolkosz reiterated her offer and volunteered to get tested for compatibility.

“I didn’t even have to ask her, which was nice because it’s not an easy question to ask someone,” Vrablic said, noting that living donors must go through a battery of tests, surgery and recovery. “She’s pretty amazing.”

“Turns out my sister was not only a match, but a perfect match,” Vrablic said. “It was like winning the lottery.”

Indeed, Dr. Scott Nyberg, Vrablic’s transplant surgeon at Mayo, said the average life expectancy of a donated kidney is 16 to 18 years, but it could be much longer and even forever for a perfectly matched kidney donated by a sibling.

Nyberg, who has performed more than 1,000 kidney transplants, said Vrablic’s case is particularly memorable because of all she went through to get to surgery.

“They’re all miracles, but this is like a special miracle,” Nyberg said, who offered a positive prognosis for Vrablic.

Roughly 75% of kidney transplants done at Mayo, or more than double the national average, are from living donors, he said. Such donations can be made directly between people who know each other, anonymously or through a paired donation in which donors and recipients are matched with other donors and recipients to get a match. Vrablic’s husband, Eric, had committed to making a paired donation on Vrablic’s behalf if she didn’t find a match.

“It’s amazing how generous people are,” Nyberg said. “It’s great when it happens.”

For Ciolkosz, the decision to donate one of her two kidneys to her younger sister wasn’t difficult.

“I love my sister, and I don’t want to lose her,” Ciolkosz said. “With us being each other’s only sisters, I know she would do the same thing for me.”

All surgeries, of course, carry some risk, and Ciolkosz also has a husband, six children and her business, Aroma Florist in Thorp, to worry about, so she sought reassurance through prayer.

When the door stayed open through every hurdle — kidney testing, child care arrangements and hiring an employee with experience running a floral shop — Ciolkosz knew donating a kidney was the right decision.

“She actually messaged me and said ‘Thank you for helping me write the last chapter of my health saga.’ But I said, ‘No, I’m helping you write the first chapter of the rest of your life.’ “

“I’m just one person who stepped up to do what I could do,” Ciolkosz said, noting that many people have supported the family by giving food, transportation, money and other assistance during their time of need.

They scheduled the surgery Feb. 23, which allowed Ciolkosz to work through the Valentine’s Day rush at her floral shop and Vrablic to finish having all of her vaccinations redone — a step necessitated by the stem cell transplant, which caused her to lose almost all immunity during the peak of the COVID-19 pandemic.

The surgery went smoothly for both patients, with Ciolkosz being discharged from the hospital two days after the procedure and planning to resume working a few hours a day this week. Vrablic stayed in the hospital for five days and has remained in Rochester for daily followup appointments.

Even now, when the sisters communicate, Vrablic occasionally will refer to “your kidney” when talking about the transplanted organ they’ve nicknamed “Sisko,” the Finnish word for sister, in honor of their shared heritage.

While Vrablic understands she will never return to the condition she was in before her health crises started, she remains upbeat about her future, referring to her new kidney as “the final piece of the puzzle to complete me this side of heaven.”

After the transplant surgery, a grateful Vrablic sent a touching message to her sister.

“She actually messaged me and said ‘Thank you for helping me write the last chapter of my health saga,’ “ Ciolkosz said. “But I said, ‘No, I’m helping you write the first chapter of the rest of your life.’ “

Vrablic, who hasn’t worked since the day before her septic shock, acknowledged she likely won’t ever work a 9 to 5 job again.

Instead, she is considering writing a book about her experiences or going into motivational speaking. She believes her faith, perseverance and positive attitude, combined with excellent medical care, helped her through a series of almost unfathomable challenges.

donatelife.net: To learn more about organ donation or sign up as an organ donor upon death.

mayoclinic.org: Search for living donor transplant to learn about becoming a living liver or kidney donor.

As a result, Vrablic remains undaunted by the prospect of taking antirejection and chemo medications for the test of her life.

“After everything I’ve been through, that’s no big deal,” she said.

For now, Vrablic just looks forward to using her post-transplant energy, spending time with her family and making the most of the best gift she has ever received from her sister — the gift of life.