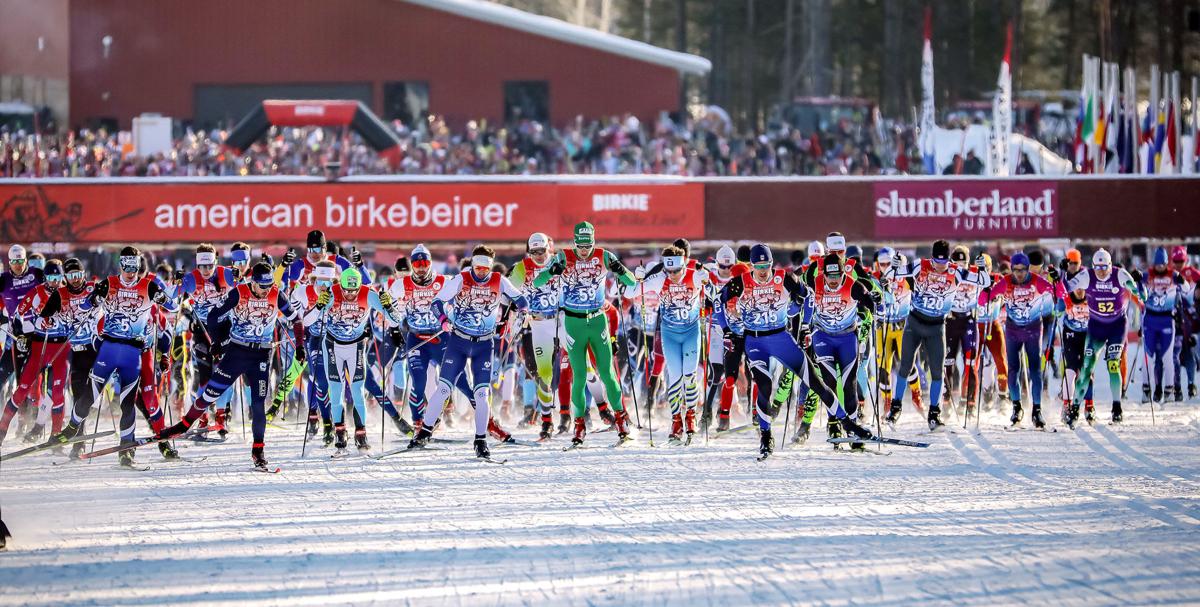 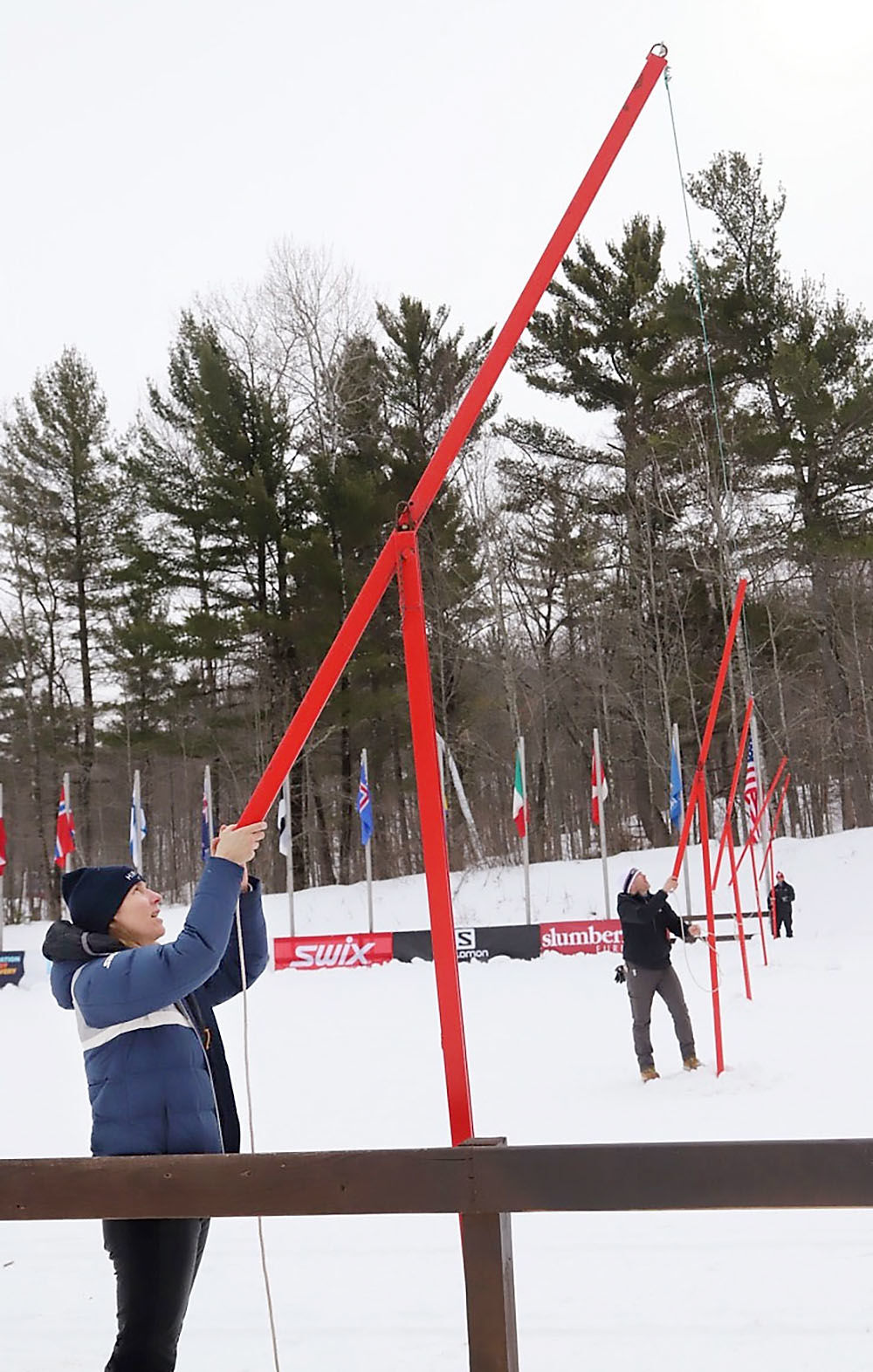 At left: American Birkebeiner Event Director Kristy Maki (front) and Executive Director Ben Popp (background) adjust banner holders at the Birkebeiner start line in the town of Cable Sunday, Feb. 21. Approximately 5,000 skiers are scheduled to do their Birkebeiner, Kortelopet or Prince Haakon events in person on the Birkie Trail Feb. 24-28. Other skiers, about 30 percent of the total, will ski their “Virtual Birkie” on one of 32 partner venues between Feb. 20-28. 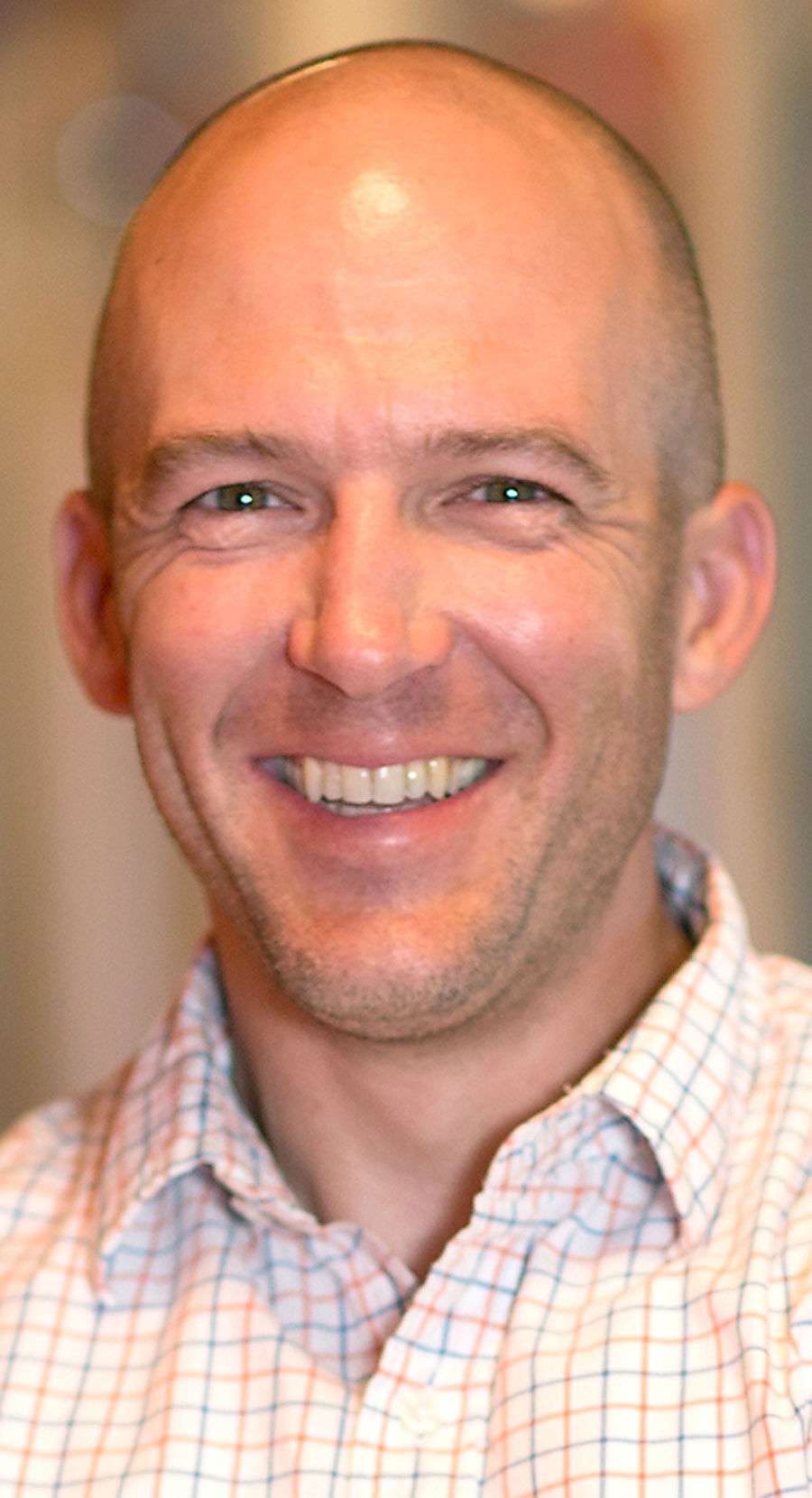 At left: American Birkebeiner Event Director Kristy Maki (front) and Executive Director Ben Popp (background) adjust banner holders at the Birkebeiner start line in the town of Cable Sunday, Feb. 21. Approximately 5,000 skiers are scheduled to do their Birkebeiner, Kortelopet or Prince Haakon events in person on the Birkie Trail Feb. 24-28. Other skiers, about 30 percent of the total, will ski their “Virtual Birkie” on one of 32 partner venues between Feb. 20-28.

In late February 2020, a couple of weeks before the pandemic hit, the American Birkebeiner ski marathon was held as usual. Thousands of vocal, maskless spectators packed shoulder to shoulder on Hayward’s Main Street as thousands more skiers pushed to the finish line on a sunny, 30-degree day, most of them unaware of how their lives soon would be upended.

One very long year later, the Birkie is back and not just virtually, a small sign that life is beginning to return to normal.

The 47th annual event, serving as a pandemic bookend of sorts, won’t be like any that preceded it, however. Already underway, it’s a weeklong hybrid of in-person and virtual skiing.

The fact that it’s back in some form reflects the unbowed spirit of determination in the race organizers and the skiers. The national and international cross-country skiing celebration will be subdued and scattered, but there will be celebrating.

“We’re going to be ski racing in the northwoods,” said Ben Popp, executive director. “The easy hand would have been to fold the cards and do (just) virtual, but we’ve done everything we can to put on an event. We said, ‘Dang, we can do this.’”

Doing it has required taking on the additional big responsibility of helping keep skiers and the Hayward-Cable area safe.

“At the end of the day, we feel very confident it’s going to be safe for the skiers, the community, the staff and the volunteers. The people who come will be safe if they heed the protocols,” Popp said.

Fewer than 4,900 skiers — less than half of normal — will be in the Hayward-Cable area. Instead of skiing mostly over two days in two big Birkie and Kortelopet events, they will be spread out over five days, from Wednesday through Sunday, for an average of fewer than 1,000 skiers each day.

There will be no downtown finish, in fact no spectators allowed.

Skiers will start and finish at the race start area outside of Cable, in a 43-kilometer loop course — several miles shorter than usual. They will begin on the skate trail and return on the parallel classic trail, with skate style on Wednesday, Thursday and Saturday and striders on Friday and Sunday.

Some true racing will be held, with champions crowned in elite skate and classic races on Saturday and Sunday, respectively. Otherwise no places will be recorded in age and gender categories, a low-key, participation event done for the challenge of completing a Birkie.

Two Birkies, in a sense, are being held this year. The virtual option has been chosen by close to 40% of skiers. They can ski their distance anytime, anywhere from Feb. 20-28 and report their results to get credit for completion. The Birkie has enlisted 47 ski venues in 11 states that will provide various levels of support for skiers to don their bibs and do their race.

Knowing that some Birkie skiers who come from warm climates also had registered for the race, the Birkie will allow entrants to complete their Birkie by roller-skiing, running, biking, swimming, rowing and more with predetermined distance equivalents for each of those activities.

“All year long we’ve been stressed,” Popp said. “Being outdoors and active is one thing you could do. Even if you’re not here physically, I think you’ll feel connected to this, celebrating the lifestyle and an accomplishment that’s huge.”

Among Chippewa Valley skiers who chose the in-person event over virtual was Bill Zimmerman of Tilden. He will be doing his 33rd Birkie on Thursday, heading up north with friends.

“The biggest part of the Birkie is skiing up there that day. This is as close as we can come to having a Birkie this year,” Zimmerman said.

He called the event a “pro-leisure” tour with no personal pressure to go fast and is just happy that at least some semblance of a Birkie is being held.

Regarding his personal safety and the protocols, he believes the Birkie has prepared “as well as can be expected.”

The safety of in-person skiers, who are requested to have a COVID-19 test before arriving in the area, has been addressed multiple ways. The Birkie held other events in the past year, such as a fall trail run and winter trail tour, where safety measures were tested.

Staff also learned from other national and international athletic events, such as the Ironman, that Popp said have not been traced to mass spreading of the virus.

“We’ve had almost an entire year to prepare, so we’re fortunate. Our community wouldn’t have been ready 10 months ago,” Popp said.

Skiers will drive to the start-finish area instead of being bused and walk to the start, with no indoor gathering spaces. They are expected to wear masks in the start and finish areas and at aid stations. Wave starts are about one-quarter as large as normal, allowing for social distancing before and during the race. Race aid stations will be self-serve and touchless — a ski pole pressed on a pedal will dispense water or energy fluid into a skier’s bottle; skiers must bring their own water bottles and food.

Popp said the Birkie has encouraged skiers to consider the virtual option to allay any of their health concerns, but the goal also is to help reduce the number of outside people coming to the sparsely populated region and potentially causing a spike in COVID-19 cases. For example, Olympic gold medalist Kikkan Randall is skiing her Birkie in Alaska, and 2020 women’s champion Jessica Yeaton is skiing her race in New Mexico.

As a result of the reduced number of on-site skiers, the number of volunteers needed is way down, from about 3,000 to the hundreds. A food station typically has 65 volunteers; this year it will have two or three, Popp said.

The changes have presented challenges for the American Birkebeiner Ski Foundation staff of 21 people. When a problem would arise they’d say, “How do we do that? I don’t know; we’ve never done it before,” Popp said. “I have to give a shout out to a really amazing staff for all the researching and innovating they’ve done.”

The trail, for example, will have to be groomed five days straight, and Popp is concerned about the snow base holding up. A finish area had to be constructed near the start area. For virtual skiers and to avoid mass bib pickup, the Birkie gave entrants the option for the first time to have their bib, race medal and hat mailed to them.

Only about 2,000 bibs will be picked up in person — but at a drive-up station. Most bibs, more than 5,000, were mailed to skiers when the option was offered. Typically, skiers pick up their bib packet as part of the Birkie Expo packed with vendors; the Expo is virtual this year.

“We didn’t know how that would unfold, but we were not prepared to mail out that many bibs at all. Our little retail store ramped up to be like Amazon,” Popp said. Skiers received tracking messages when their bib was mailed and when delivered.

Some pandemic-forced race changes — Popp noted the adage “necessity is the mother of invention” — won’t be one-offs. A new Birkie app, the bib mailing option, advances in communicating with entrants and more changes either will continue to be used or will be adapted in some form in future years.

“There’s a silver lining in that a lot of the tech and innovation (needed this year) we’ll be able to reuse. The pandemic has forced us to pause and think a little bit,” Popp said.

Popp and staff already are planning for the February 2022 race, hoping for a full in-person event and a downtown Hayward finish but understanding there still could be pandemic impacts.

“We’re confident about having a much more normal Birkie, but maybe not everything will be back,” he said.

He knows some skiers are disappointed, but they understand the 2021 Birkie is happening only because concessions have been made.

“We’ve heard a lot of positive feedback. There are a lot of options, and people are happy with that,” Popp said. “Eventually the sunshine is going to come back.”