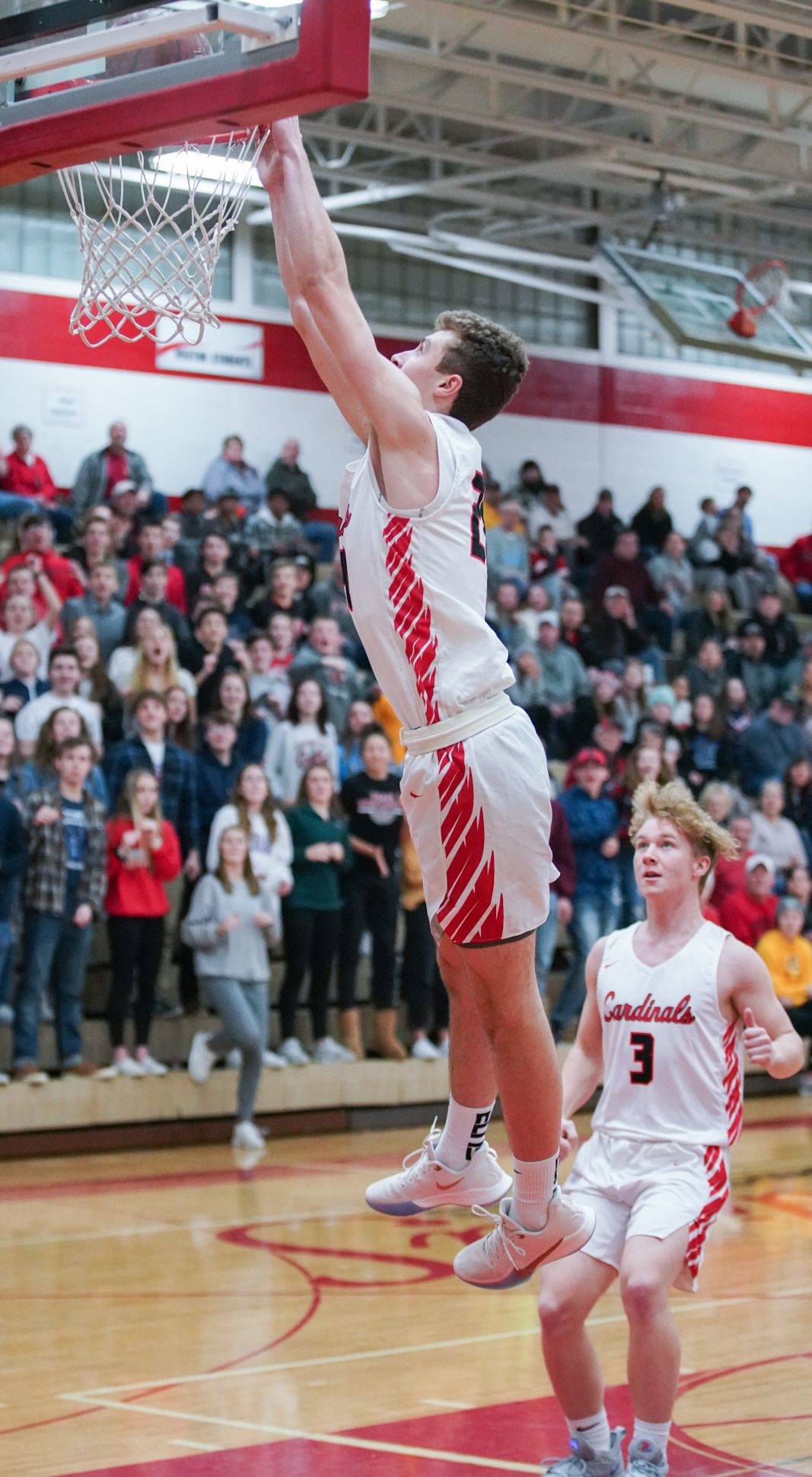 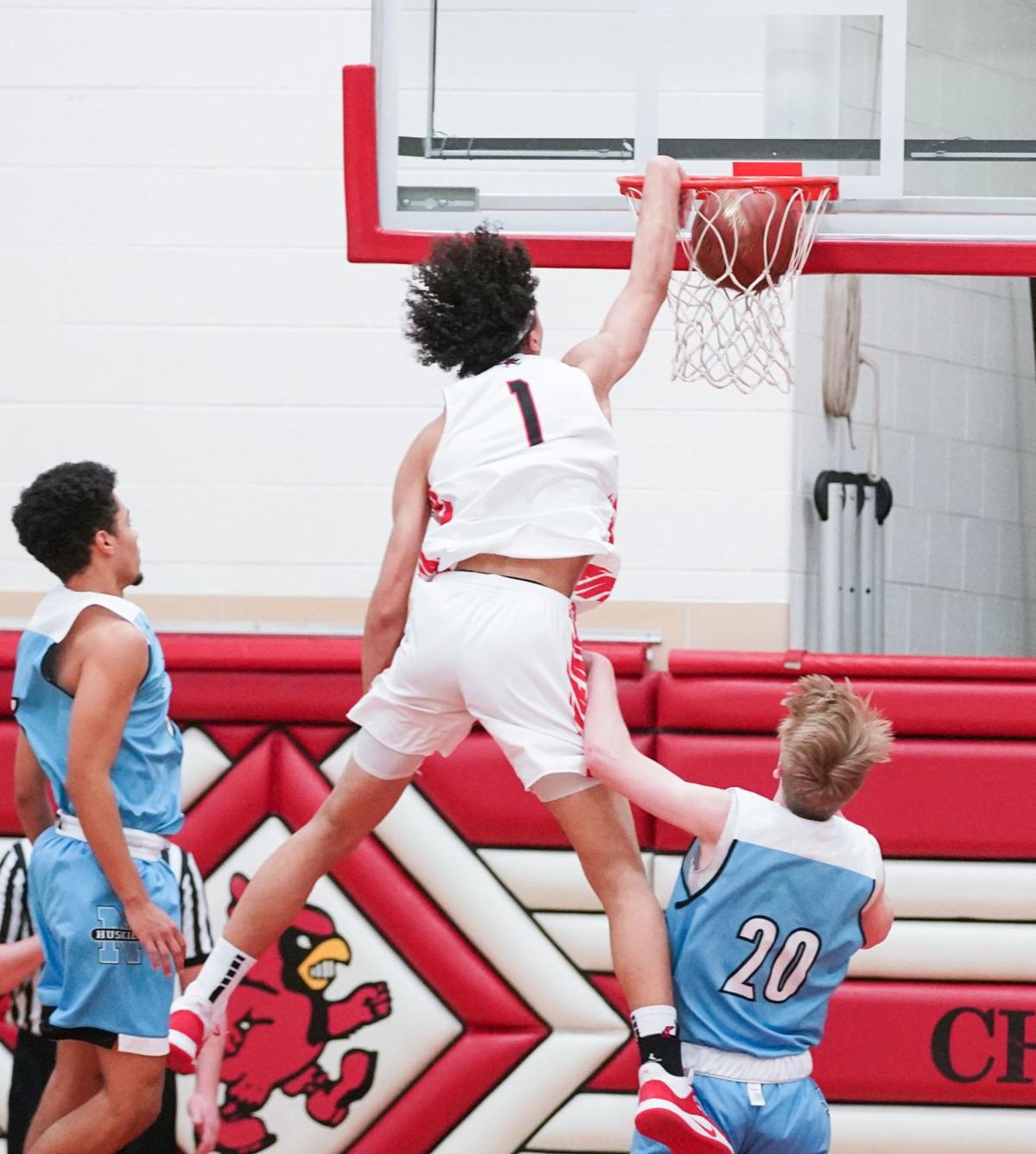 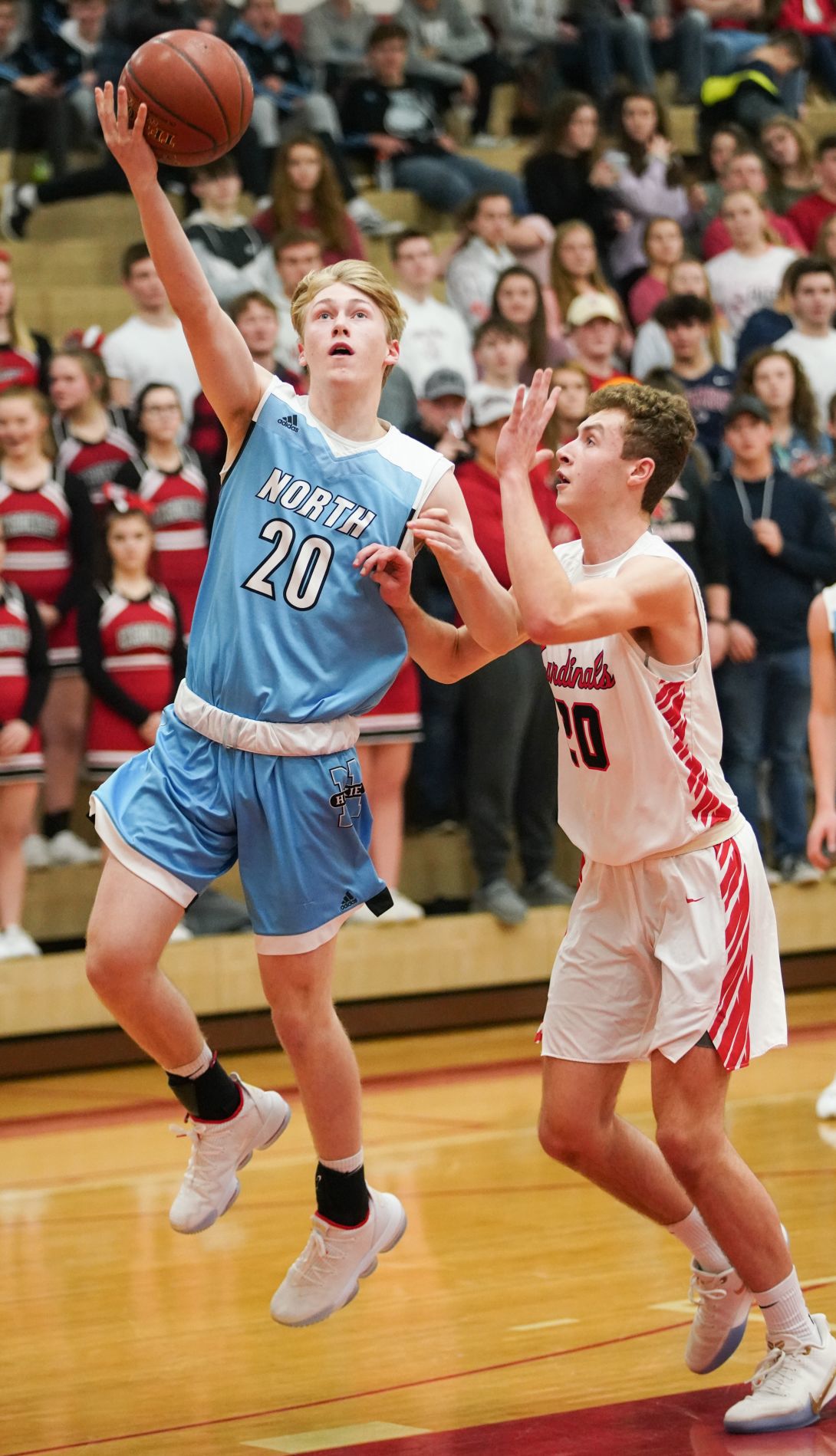 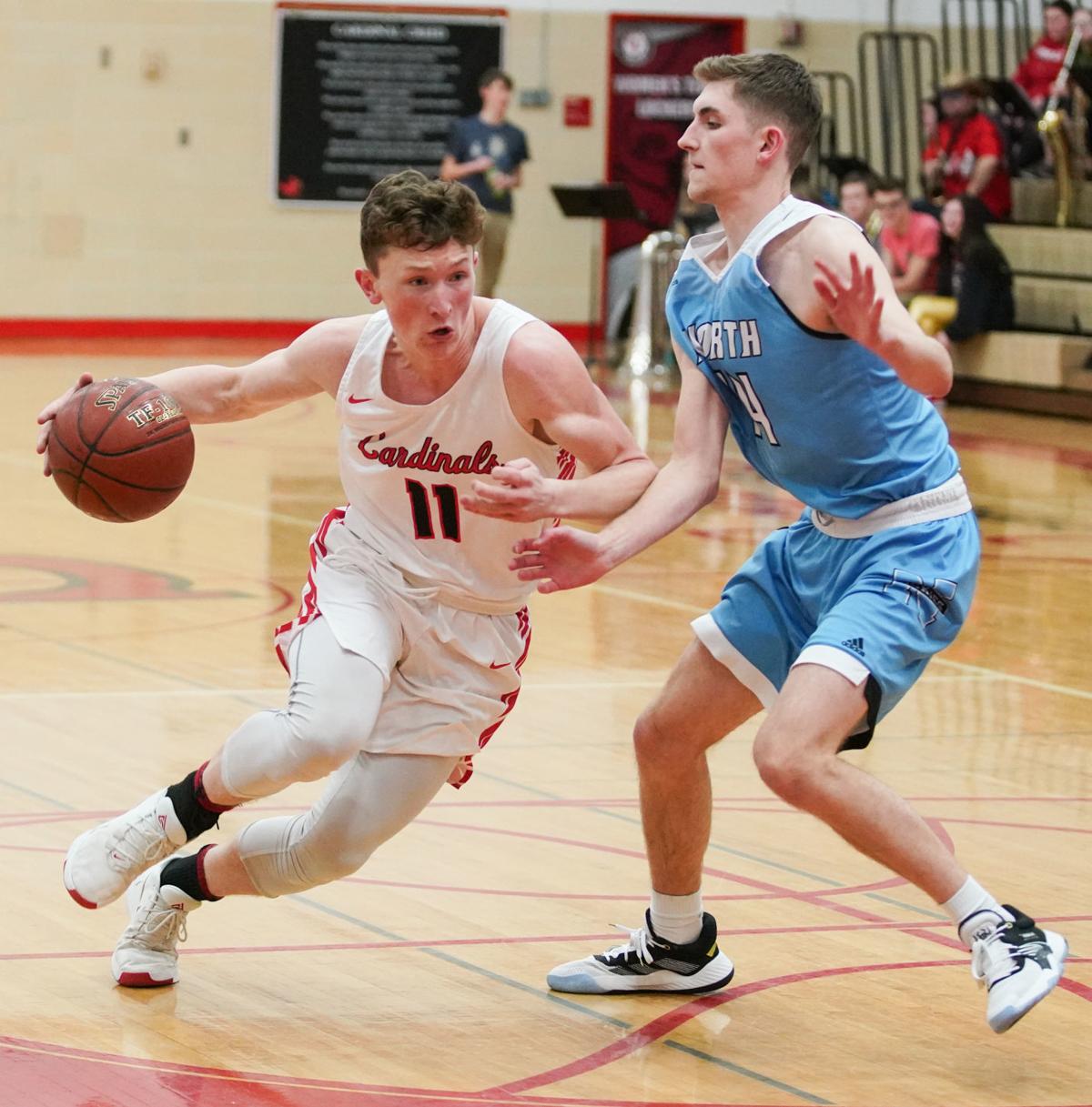 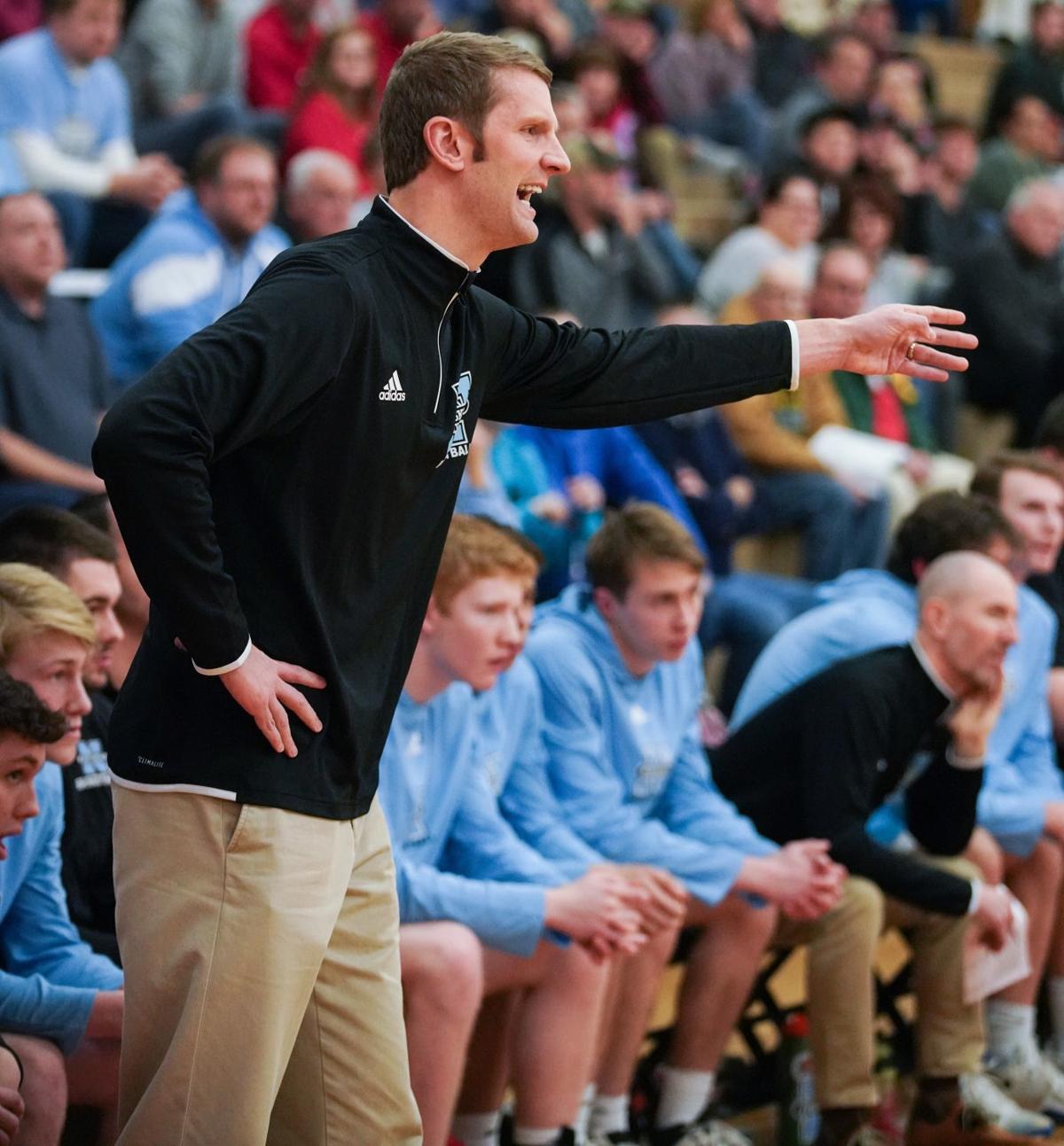 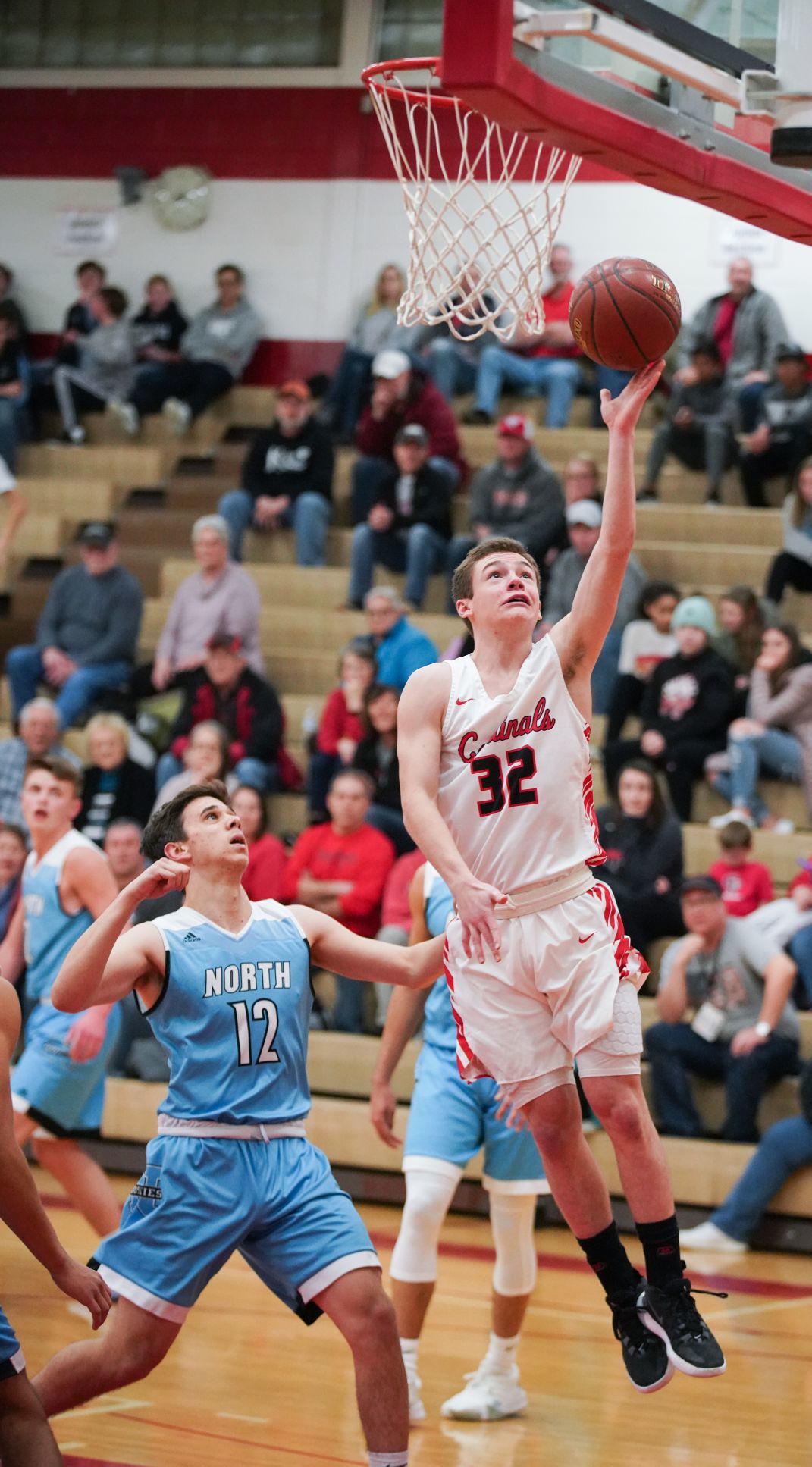 Chippewa Falls' Kansas Smith goes up for a layup past Eau Claire North's Kyle Greenlund on Tuesday in Chippewa Falls. 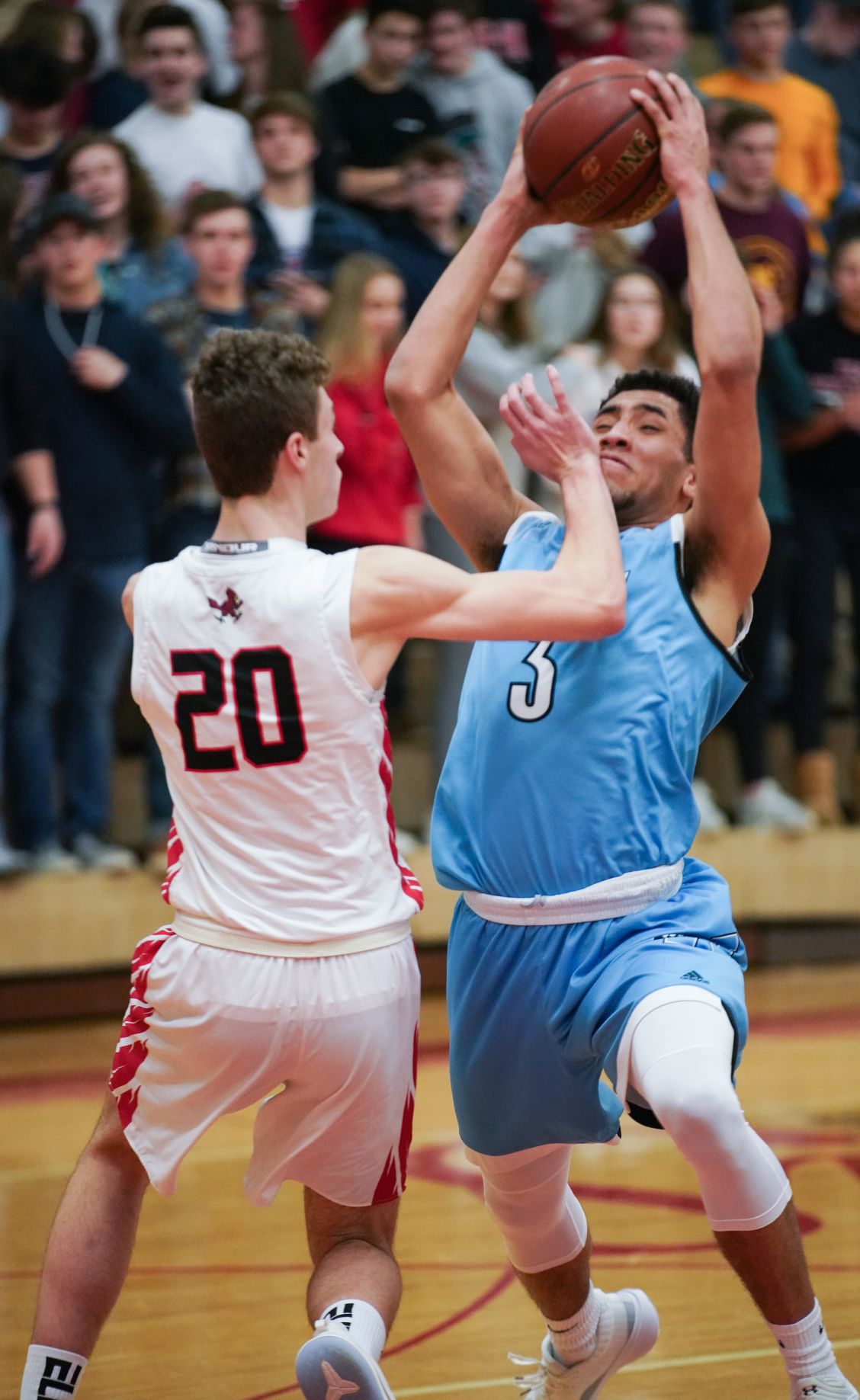 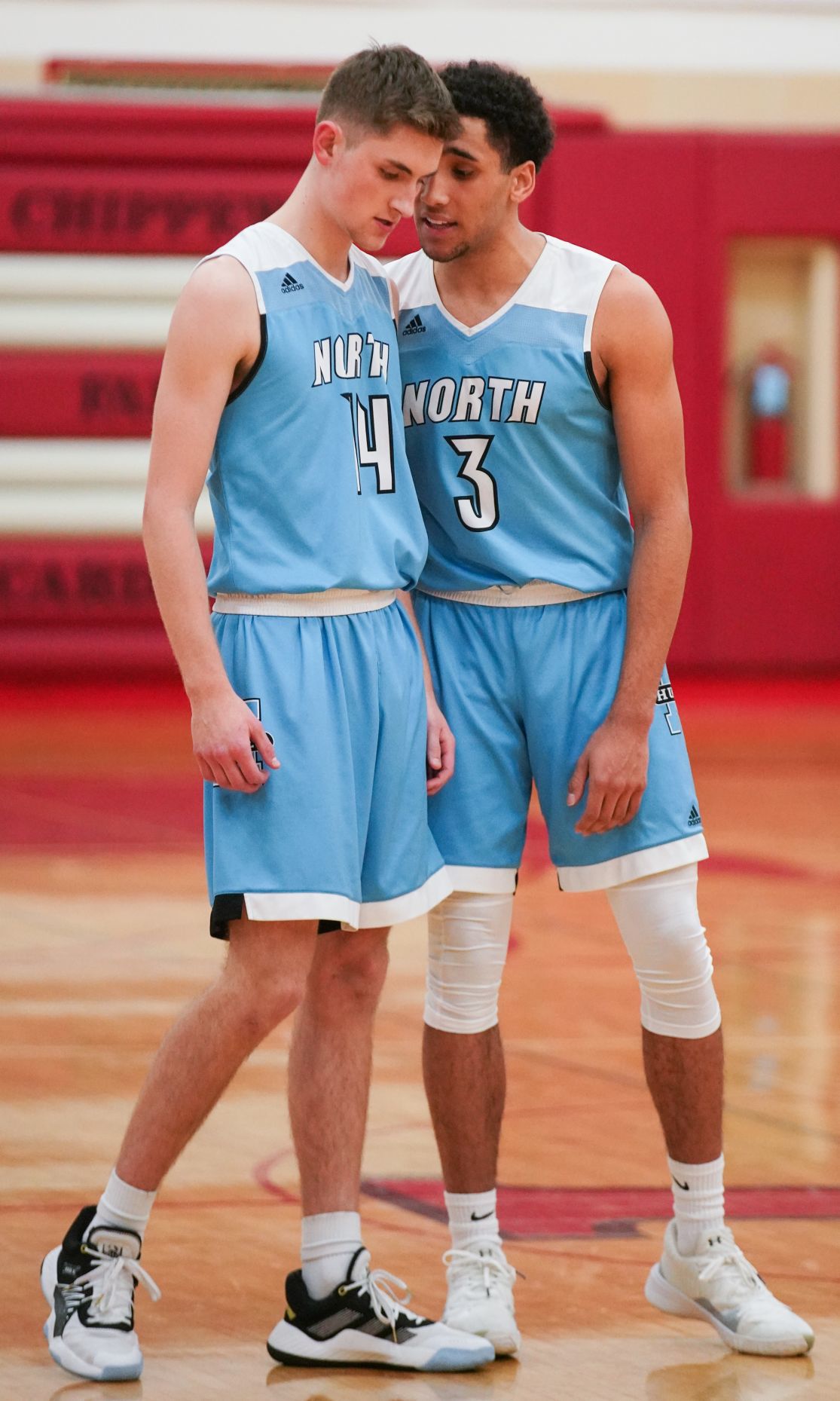 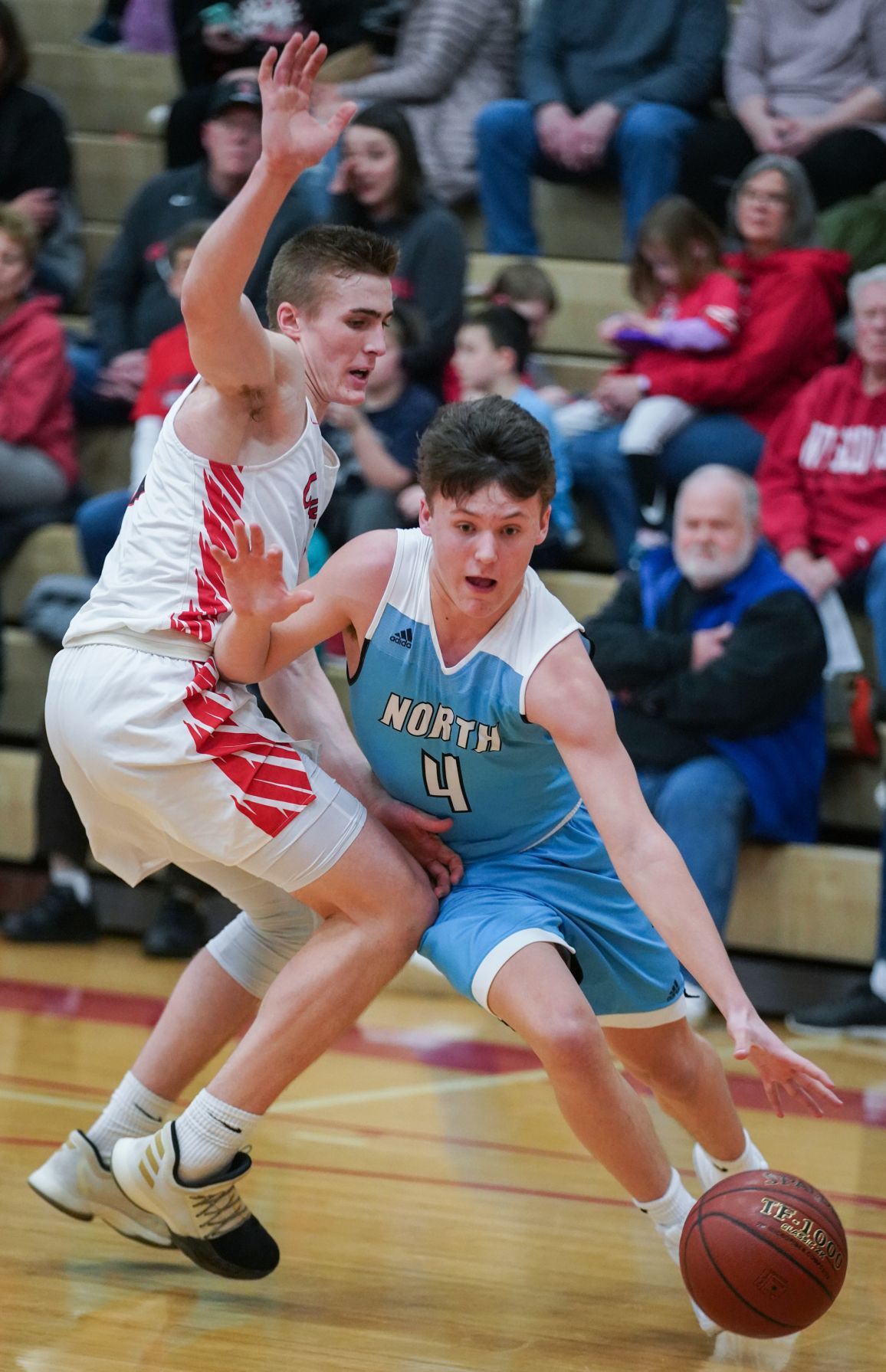 Chippewa Falls' Peyton Rogers Schmidt goes up for a layup against Eau Claire North on Tuesday in Chippewa Falls. 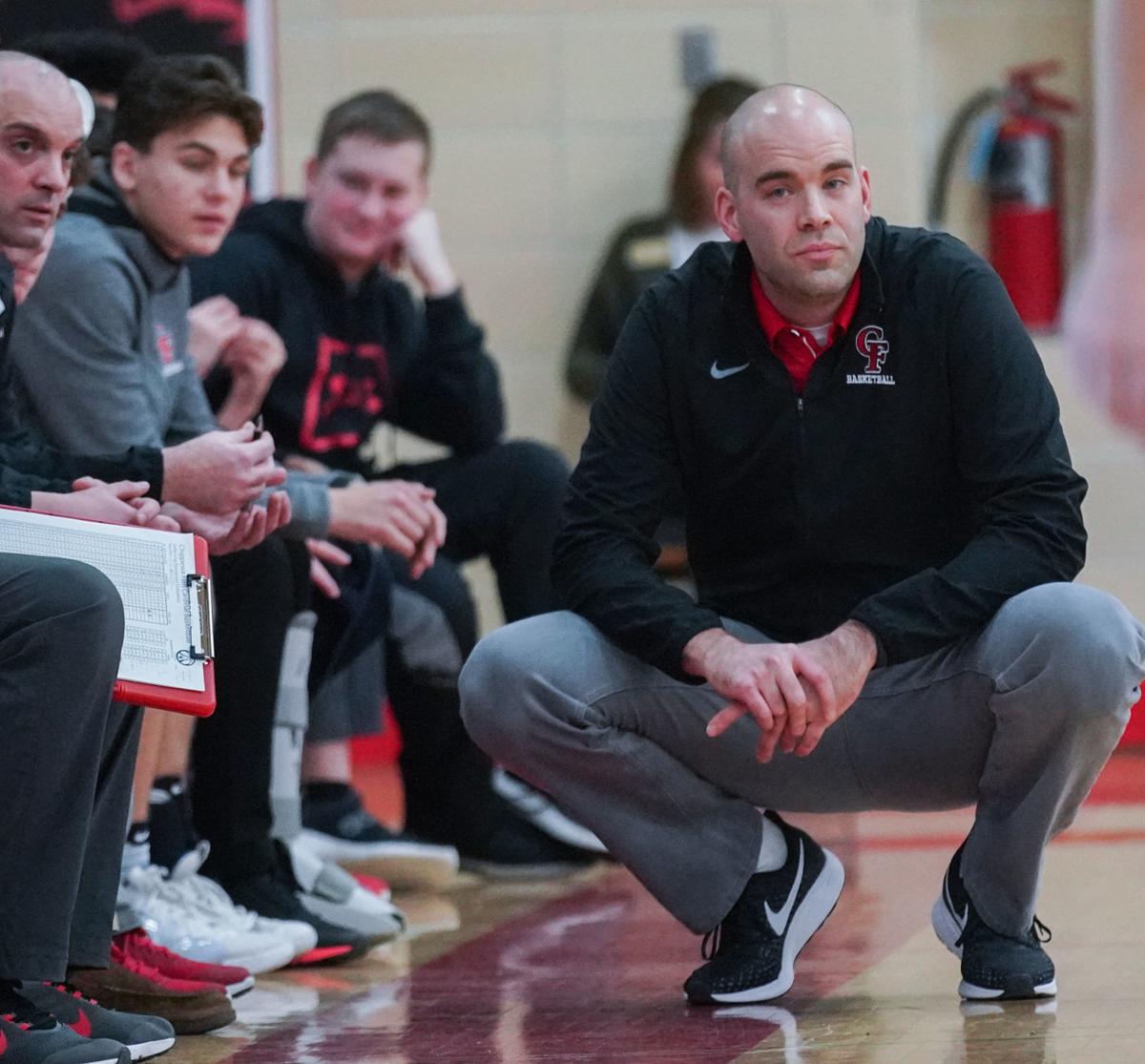 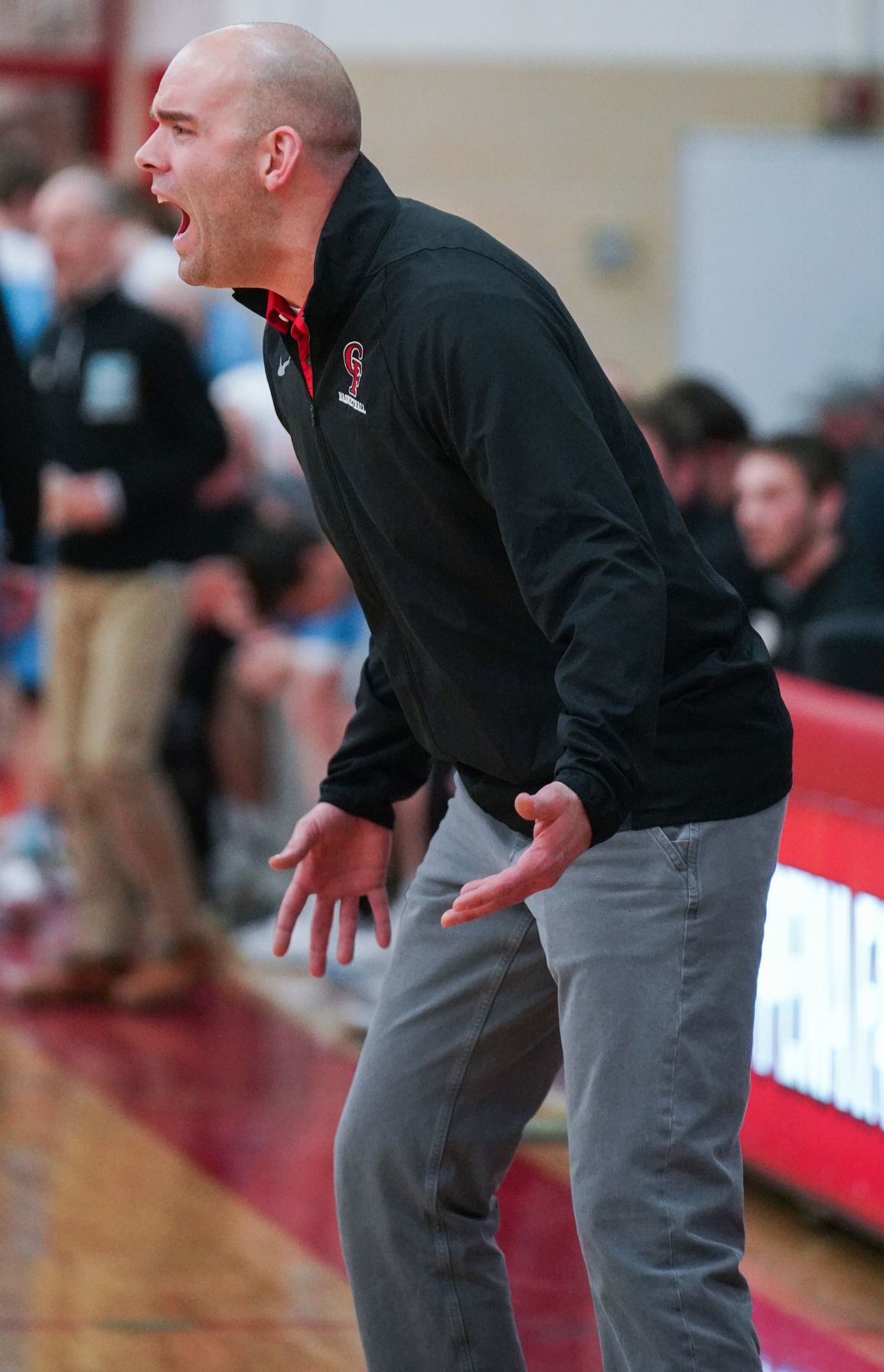 Chippewa Falls' Kansas Smith goes up for a layup past Eau Claire North's Kyle Greenlund on Tuesday in Chippewa Falls.

Chippewa Falls' Peyton Rogers Schmidt goes up for a layup against Eau Claire North on Tuesday in Chippewa Falls.

CHIPPEWA FALLS — It’s not even February yet and Chippewa Falls boys basketball is starting to accumulate prove it victories.

Peyton Rogers-Schmidt outscored and outrebounded everyone else in the gym, notching 23 points and grabbing 14 boards, while playing stellar defense in the Cardinals’ 59-52 victory against the previously undefeated Eau Claire North Huskies Tuesday. The win pushes Chi-Hi into a three-way tie for first in the Big Rivers with North and Hudson, which bested Eau Claire Memorial on Tuesday.

Rocking the lively crowd was a dunk party for the 8-3 Cardinals, featuring two slams each from Rogers-Schmidt and Jacob Walczak. But while the offensive plays were flashy, Rogers-Schmidt’s performance on North’s Division I-bound guard, Dalton Banks, was just as vital for the win.

Proue stuck the 6-foot-6 Rogers-Schmidt on Banks for nearly the entire game, utilizing the Cardinal’s size to slow down the 6-foot-2 Banks. Even with a size advantage, that was no easy task.

“He’s just so fast and in transition you can’t stop him,” Rogers-Schmidt said. “He goes right past you.”

While fouls did come, Rogers-Schmidt did an admirable job containing the North star. Banks still put up his points, 18 by the final buzzer, but it came on 7 for 20 shooting from the field.

“It really helps having Peyton with his length,” Proue said. “He’s 6-6, but his length is like 6-9, 6-10. And Banks doesn’t see that that often. Having Peyton on Banks really helps us with the rest of our defense because we don’t have to throw another guy or two at him.”

North, which entered the contest 9-0, started out strong, leading by eight on two occurrences. But Chippewa would win the final 10 minutes of the first, thanks largely to a 7-0 run kicked off by a Joe Reuter pull-up.

The Cardinals took their first lead, 23-22, on a Rogers-Schmidt basket with 2:29 remaining in the first. A possession later, Rogers-Schmidt would benefit from a falling Husky, snagging the ball and running in for an uncontested dunk.

Rounding out Rodgers-Schmidt’s stellar end to the first was one of the best slams you’ll see on a high school court, a leaping tomahawk jam to secure a 27-22 halftime lead.

“Summer league and AAU I’ve got that plenty of times. No surprise,” Rogers-Schmidt said with a laugh. “They knew not to jump with me.”

North got its mojo back at the start of the second, going on a 9-2 run after Rogers-Schmidt opened the half to retake a 31-29 lead. With Banks closely accounted for, secondary scorers like Ashton Kallstrom, Chad Kron and Henry Wilkinson led the charge. Chippewa extended the lead back out to six with an ensuing 10-4 run, but North closed the deficit once again when Banks earned a steal and a transition layup to tie it at 42.

“Our kids really battled back,” North coach Todd Marks said. “I was proud of our kids. I thought there was twice where we could have folded but we battled back.”

In the closing minutes, it came down to a handful of big-time plays for the Cardinals. Reuter hit a 3 from the top of the key to tie the game at 47 with 3:28 remaining, then Walczak followed with another from long range to put the team up three.

Rodgers-Schmidt picked up his fourth foul with just under seven minutes remaining, forcing Proue to switch Reuter onto Banks. In the final two minutes Rodgers-Schmidt switched back to the future Southern Illinois guard and withstood one of the Husky’s patented drives with 59 seconds remaining to retain a 3-point lead. Banks fouled Rogers-Schmidt after the Cardinal snagged the rebound, sending the versatile senior to the line for two of his four charity-stripe shots in the final 60 seconds.

“He went vertical, kind of went back a little bit,” Proue said. “He really did a nice job of not just conceding the layup, but making sure that he was in legal guarding position.”

The Cardinals hit five free throws before Banks hit a desperation 3 with 15 seconds left to cut the lead to five. But Reuter was calm, sealing the victory with another pair of free throw shots.

“I was definitely very impressed with Chippewa,” Marks said. “We knew this would be a really tough matchup. A lot of length across the board, really good ball skills. They’re interchangeable parts.”

Chippewa Falls has an opportunity to earn another strong victory on Friday when the Cardinals host River Falls.

North entered the opposing locker room with feelings it hasn’t dealt with since March. But a win against archrival Eau Claire Memorial on Friday can flush out any negativity.

“We’re at the point in our program where we don’t have moral victories,” Marks said. “You let that sting kind of fuel you for the next game.”