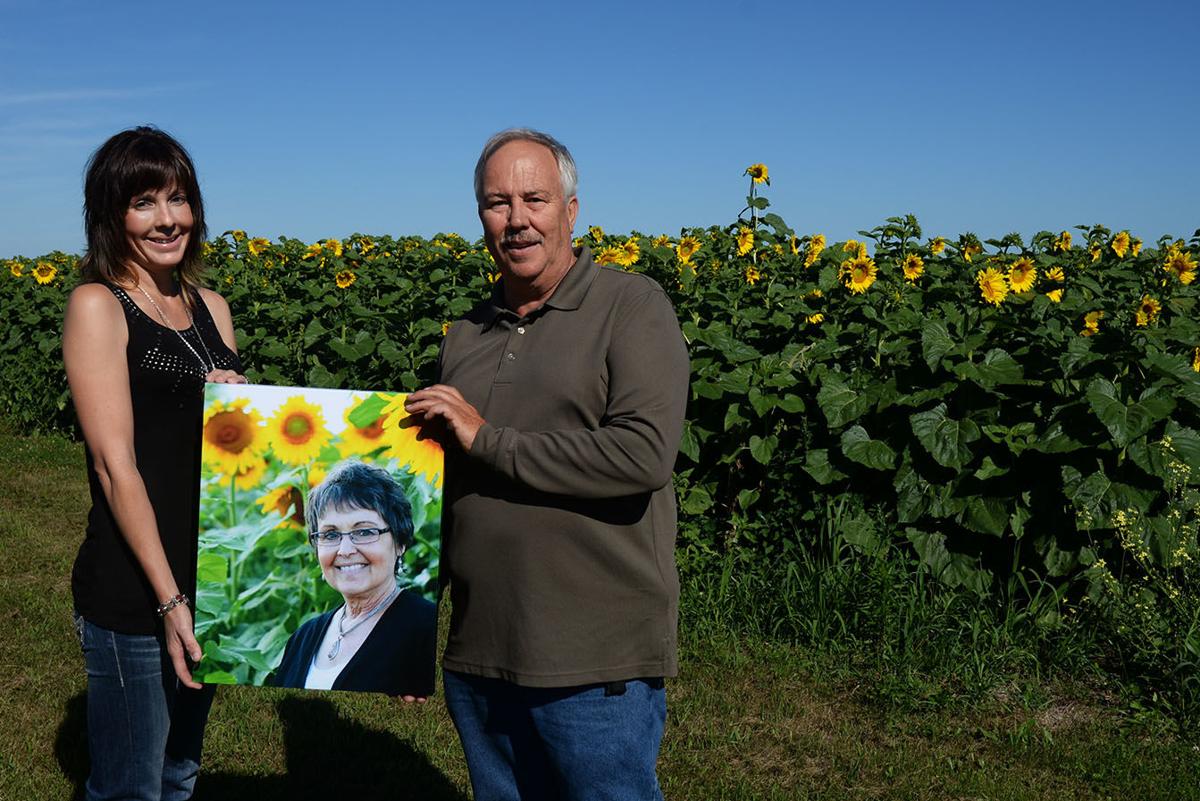 The late Babbette Jaquish loved sunflowers and as a tribute to her after her death from cancer, her widower Don Jaquish and daughter Jenny White planted sunflowers along Highway 85. The tribute, called Babbette’s Seeds of Hope, received international attention this year. 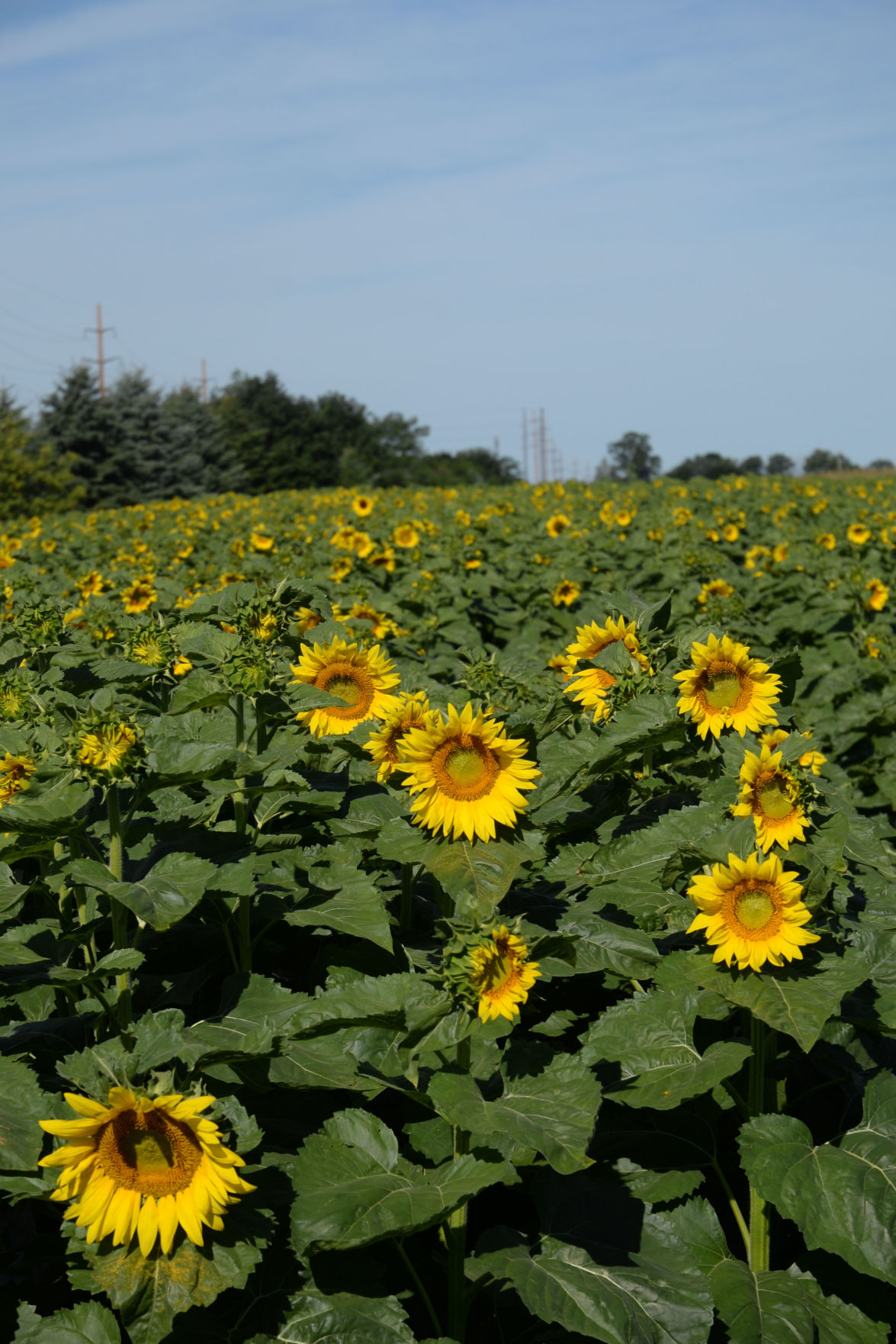 The late Babbette Jaquish loved sunflowers and as a tribute to her after her death from cancer in November, her widower Don Jaquish and daughter Jenny White planted sunflowers along Highway 85. The seeds will be used for fund-raising for Babbette's Seeds of Hope.

The late Babbette Jaquish loved sunflowers and as a tribute to her after her death from cancer, her widower Don Jaquish and daughter Jenny White planted sunflowers along Highway 85. The tribute, called Babbette’s Seeds of Hope, received international attention this year.

The late Babbette Jaquish loved sunflowers and as a tribute to her after her death from cancer in November, her widower Don Jaquish and daughter Jenny White planted sunflowers along Highway 85. The seeds will be used for fund-raising for Babbette's Seeds of Hope.

Those who knew Babbette Jaquish say the sea of brilliantly blooming sunflowers along a four-mile stretch of Highway 85 southwest of Eau Claire  is a fitting tribute to her and her family’s campaign for cancer research.

Jaquish, commonly known as the “sunflower lady,” died in November at age 66 after a nine-year battle with multiple myeloma, a cancer that causes plasma cells to multiply out of control and  crowd out healthy cells, weakening the immune system. There is no cure.

“Everybody who ever met her fell in love with her,” said Don Jaquish Jr., who married Babbette in 2000 and routinely planted hundreds of acres of sunflowers in her honor. “I was lucky enough to be the guy she fell in love with. She had a smile that would just light up a room.”

Don Jaquish’s tears while describing his late wife exemplified his feelings of loss. He said planting about 80 acres of sunflowers this spring along Highway 85 between Highway 37 and the community of Caryville is fitting and important, for at least two reasons.

“My wife was given two weeks to two months to live, fighting this cancer as long and hard as she could, and went through 23 treatments, so anything I can do to honor that, I will do,” he said. “She also had a plan to have seeds from the sunflowers used to raise money for cancer research. She was involved with clinical research and knew how much it costs families.”

Babbette’s Seeds of Hope was started by Don Jaquish and Jenny White, Babbette’s daughter by a previous marriage. The business will donate a portion of the proceeds from the products to hospitals, research, and patient advocacy, for cancer and other illnesses.

“We know what cancer is like and its impact on so many,” Don said.

The business’ sunflower seeds, corn and wildlife blends are designed to attract wildlife for outdoor enthusiasts.

Don received permission from most property owners along the highway to plant the flowers.

“It was amazing,” he said. “I had their cooperation. They knew what it was all about. It’s an honor to Babbette that they were so willing to do this.”

Farmer Bob Riekemann, who lives near the Jaquish farm, actually had about an acre of rye planted last fall in the roadside area where Jaquish wanted to plant sunflowers.

“I never thought twice about it when he asked if he could put sunflowers there,” Riekemann said Monday. “She was a very nice neighbor lady, and you do things like that out here in the country when people ask. When he asked, that was it. Everybody wants to do what they can to help their neighbor.”

Babbette began plans years ago about the Seeds of Hope project, but health issues slowed the process, according to Don and White.

“Mom dreamed of a life without cancer for herself and other people,” White said, glancing at Don as he wiped away more tears. “All this is Mom’s idea, about doing something to help those who are going through what she went through in her battle. You don't realize the importance of cancer funding until you have a family member going through it.

“We just think this is a great cause for a great lady,” White added. “She touched a lot of lives in the time she was here, and we hope that continues through Seeds of Hope.”

The Jaquish family also has an older Jeep that has been detailed with the Seeds of Hope logo and other sunflower-style markings, all in tribute to Babbette. Friends and local businesses contributed time, paint, tires and other items to impressively outfit the Jeep, all at no charge.

“They did it out of love and respect for Babbette,” Don said, adding that some of those involved also had lives greatly impacted by cancer.

Overall, Don has planted hundreds of acres of sunflowers, including those along the road and an 80-acre site along Highway 37, in honor of Babbette. The massive blooming is expected to peak in about a week.

“Every time I look out there, I think of her and what she meant to me and so many others,” Don said. “She had a tremendous spirit.

“When the fields are filled with sunflowers, people stop and take pictures and enjoy the beauty,” he added while staring out the kitchen window. “You can see why she loved them so. Her thoughts of others, with the Seeds of Hope idea, shows why we loved her so.”

• More information about Seeds of Hope can be found at babbettesseedsofhope.com.