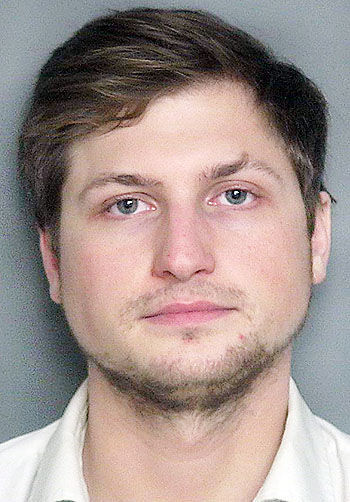 A Chippewa Falls man who was accused of stealing a woman’s luxury vehicle and service dog while the vehicle was parked outside an Eau Claire residence will spend seven days in jail.

The man then took the dog into an Eau Claire tavern, police said.

Eau Claire police officers spoke with a woman who said she parked her Tesla Model S on Dec. 23, 2018, in a private parking lot in the 100 block of South Barstow Street while she and her family ate in a restaurant.

The woman said personal items and her service dog were inside the vehicle.

The woman and her family returned to find the vehicle was gone.

The woman used an app on her phone to track the vehicle to the back parking lot of Scooter’s, 411 Galloway St., where she and her husband found the vehicle.

The service dog was not in the car.

The woman’s husband and father went into the tavern and located the dog in the company of Hakes.

The bartender indicated Hakes came into the tavern with the dog.

The woman said no one had permission to take the car or the dog.

An officer met with Hakes, whose eyes were glassy and bloodshot. A strong odor of intoxicants came from his breath.

Hakes also denied entering Scooter’s with the dog, even though witnesses saw him there with the animal.

Hakes claimed he had been inside The Lismore Hotel and bar and had taken an Uber to Scooter’s.

Hakes failed field sobriety tests. He argued to the point that he was refusing to perform a one-legged standing test.

He was arrested for vehicle theft, drunken driving and dognapping.

Hakes was previously convicted of drunken driving in October 2010 in Eau Claire County.