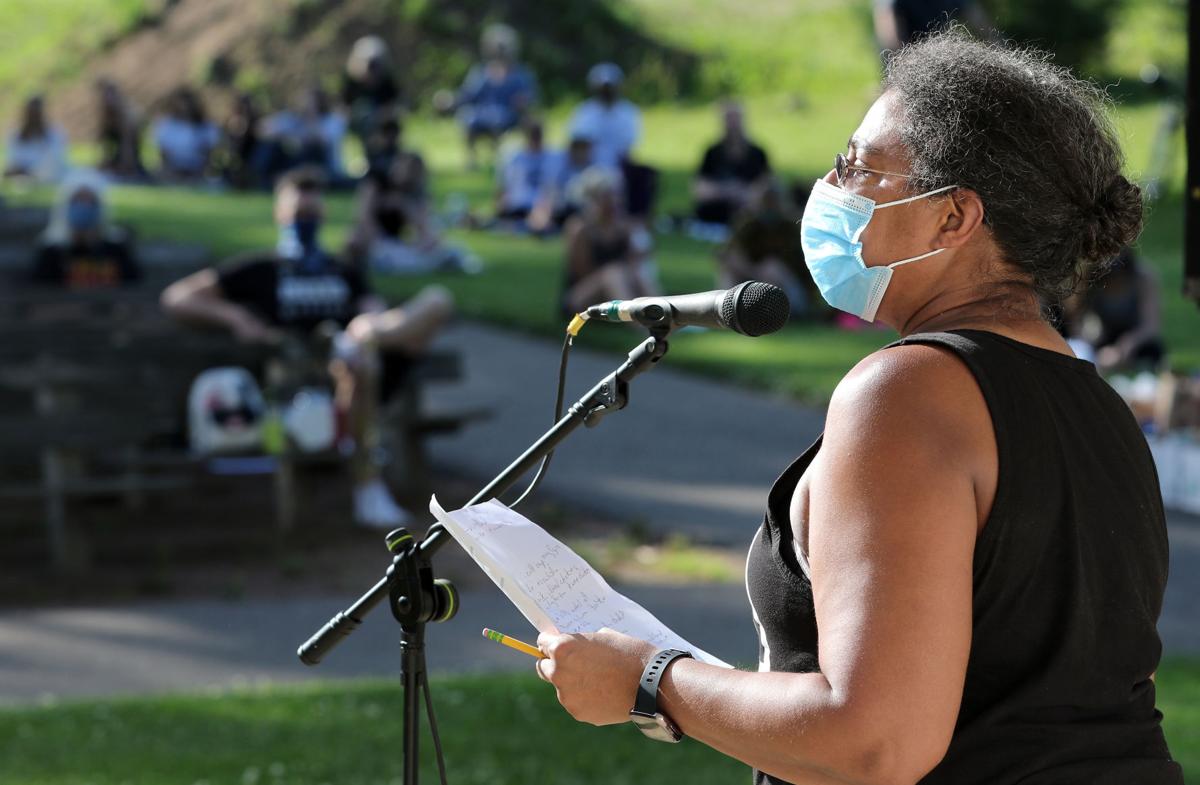 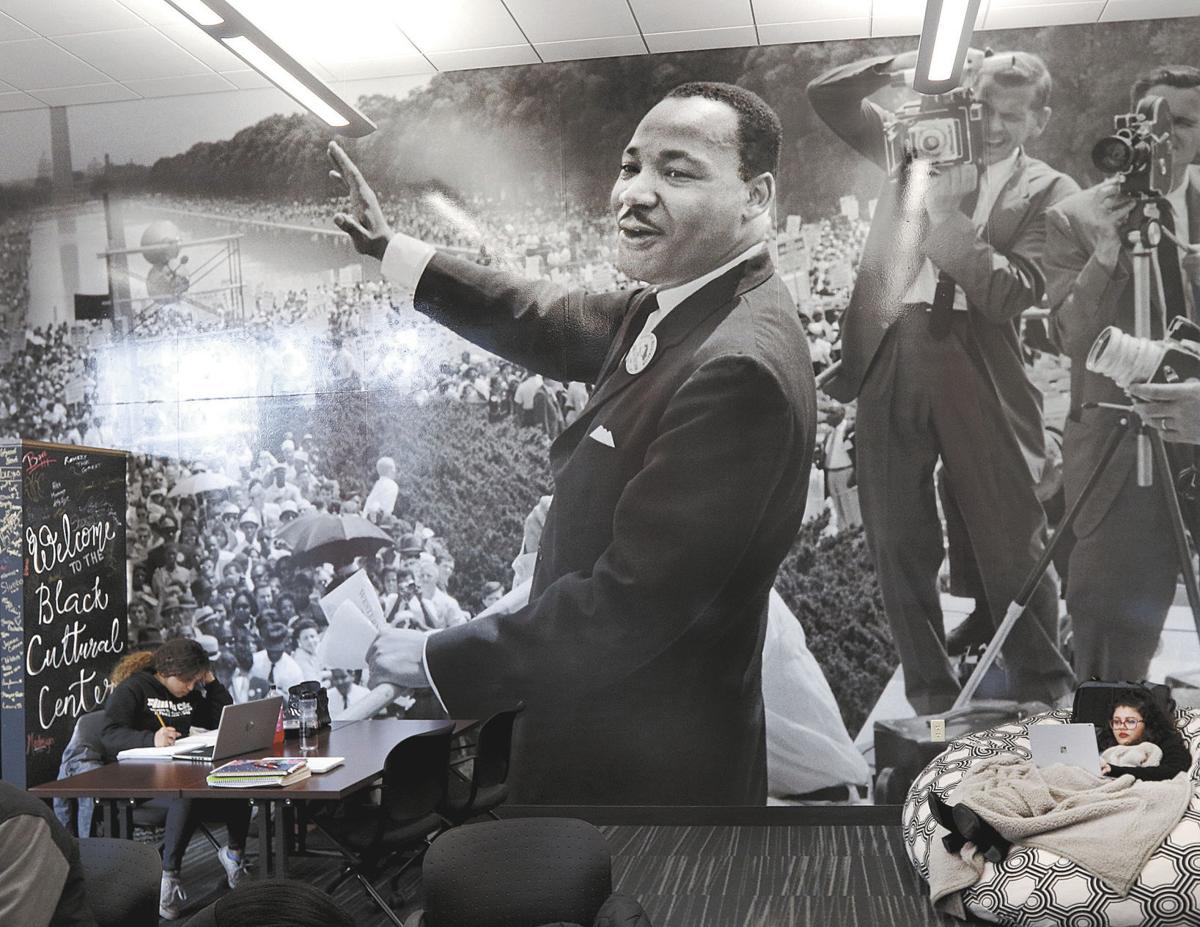 A giant reproduction of Martin Luther King Jr., whose life will be celebrated with an event Monday at UW-Eau Claire, is a highlight of the university’s Black Cultural Center in Centennial Hall. The center offers African-American students a space of their own on campus. 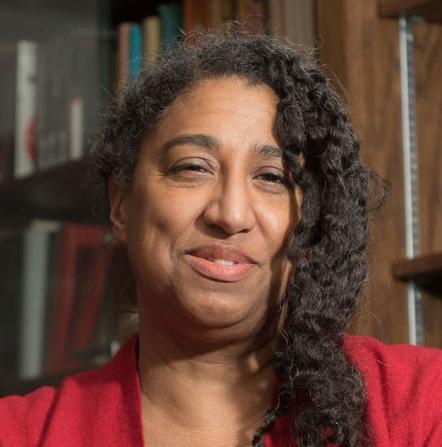 A giant reproduction of Martin Luther King Jr., whose life will be celebrated with an event Monday at UW-Eau Claire, is a highlight of the university’s Black Cultural Center in Centennial Hall. The center offers African-American students a space of their own on campus.

Instead of the usual celebration of King’s life and work, the 8½-hour event beginning at noon Monday will be transformed into a program focusing on racism and civility.

“The program will focus on where do we go from here and how do we rebuild our unity after all of this,” said UW-Eau Claire history professor Selika Ducksworth-Lawton, a longtime organizer of local MLK Day ceremonies and president of the racial peace advocacy group Uniting Bridges. “This is what we felt we needed right now.”

The event, which traditionally features speeches, readings and live music, also will shift to a virtual format for the first time to help stop the spread of COVID-19. Ducksworth-Lawton promises the program’s final session, which will include live music from local artists, should be fun and uplifting.

But the big change will be the inclusion of multiple panels and discussions diving into different aspects of racism led by university, local government and community leaders.

“We needed to shift gears and try to give people the tools we need to do the work we need to do right now to remain a strong country,” Ducksworth-Lawton said, referring to Wednesday’s Capitol raid by supporters of President Donald Trump seeking to overturn the results of the presidential election won by President-elect Joe Biden and Vice President-elect Kamala Harris.

Among the topics tackled in various sessions are the ABCs of racism; antisemitism and racism; race and religion; race, civility and the First Amendment; fighting disinformation; and how the history of the Ku Klux Klan in the Chippewa Valley affects the area today.

Another session will share information on the Transformation Project, a regional anti-racism effort aimed at creating the most inclusive and affirming community possible for all people.

Adam Accola, a co-organizer of this year’s MLK Day program, said he is excited about the event’s potential to get people talking about the problems associated with racism and ways to fight them without fear of being judged.

“The goal is to get people to honor someone who made a huge impact on civil rights in the United States and someone whose message is 100% relevant to what’s happening today,” Accola said. “We’re still working toward that ideal America Martin Luther King Jr. was pushing for in his ‘I Have a Dream’ speech.”

With so much national attention on the Capitol attack and racist ideas being espoused by some of the perpetrators, Accola is optimistic that many Chippewa Valley residents will tune in to the MLK Day presentation to learn about ways they can be part of the solution.

“I feel like people are more willing to do the work right now,” he said. “They understand that people of color are exhausted from screaming about racism for so long and this is an opportunity for allies to come together and see how they can be part of that positive change that Martin Luther King Jr. fought for and died for.”

Ducksworth-Lawton said speech and behavior that advocate violence and racism pose a threat to democracy and embolden extremists and white supremacists such as those who broke into the Capitol last week.

The hope, she said, is that the MLK Day panels will give local residents a safe place to talk about how people of all races and political persuasions can stand up to that kind of attitude. The subject is especially timely in the wake of the racial justice protests that swept the nation last year after the May 25 death of George Floyd, a Black man, at the hands of Minneapolis police.

“We’re at this historical moment where we have to decide what we’re going to do. We need to recognize this moment, take it seriously and do the right thing,” Ducksworth-Lawton said. “The strength of America has always been that we faced our problems and we fixed them.”

This year’s event, which also will include multimedia and art presentations from the “Black Lives Matter: Silence Equals Violence” exhibit, is a collaboration among Uniting Bridges, Pablo Center at the Confluence, Converge Radio, UW-Eau Claire, Chippewa Valley Technical College, UW-Stout and the cities of Eau Claire and Altoona.

It will be streamed on Perigon through Pablo Center and Facebook Live on the King Remembrance Program for Eau Claire WI Facebook page. Portions of the event will be broadcast on Converge Radio, 101.9 FM. Participants can register at pablocenter.org.

Mayo Clinic Health System in Northwest Wisconsin is awarding a total of $20,000 in grants to four regional nonprofit organizations.

Funding for these grants comes from Mayo Clinic's new EverybodyIN Fund for Change. Last summer, Mayo Clinic staff contributed nearly $89,000 to the fund with the goal of supporting efforts to advance racial equity. Mayo Clinic's match brought the fund's total to $200,000. More than 100 organizations located in communities that Mayo Clinic serves applied for the grant funding.

A total of 36 organizations located in Arizona, Florida, Minnesota and Wisconsin will receive a portion of the $200,000 in grant dollars.

The organizations selected to receive funding in the Northwest Wisconsin region:

• Inclusa, $11,000 to be used for translation of documents, website, brochures and Tribal/Indigenous Outreach programs.

• LGBTQ+ Community Center of the Chippewa Valley, $4,000 to assist with ots 2021 strategic plan of outreach to people of color and other marginalized groups that often do not have LGBTQ+ support.

• Chippewa Falls Public Library, $1,000 for buying books related to diversity and inclusion for the Children’s and Youth department.