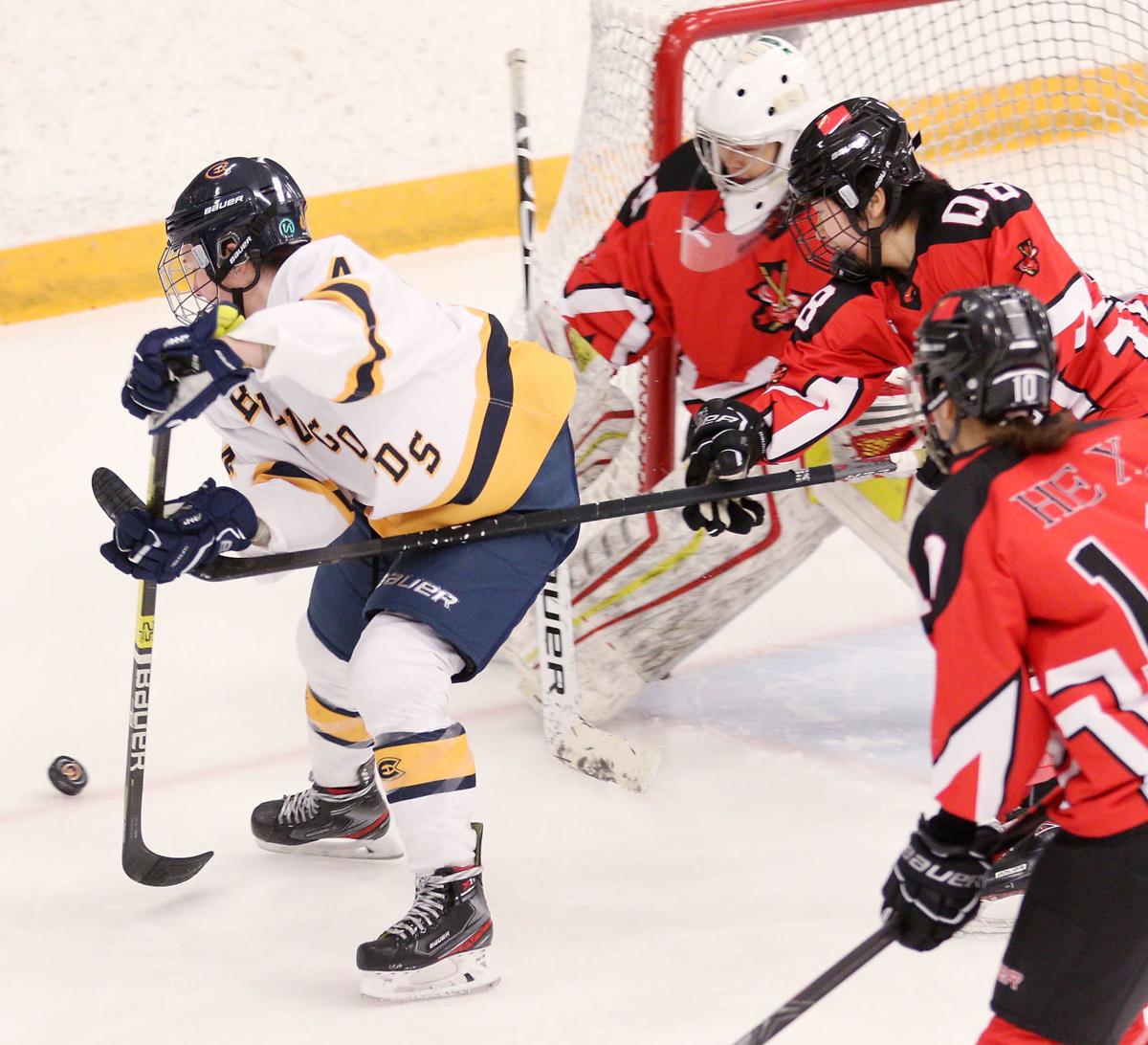 UW-Eau Claire’s Hallie Sheridan works the puck around the goal against Team China on Friday, Jan. 3, 2020 at Hobbs Ice Center. 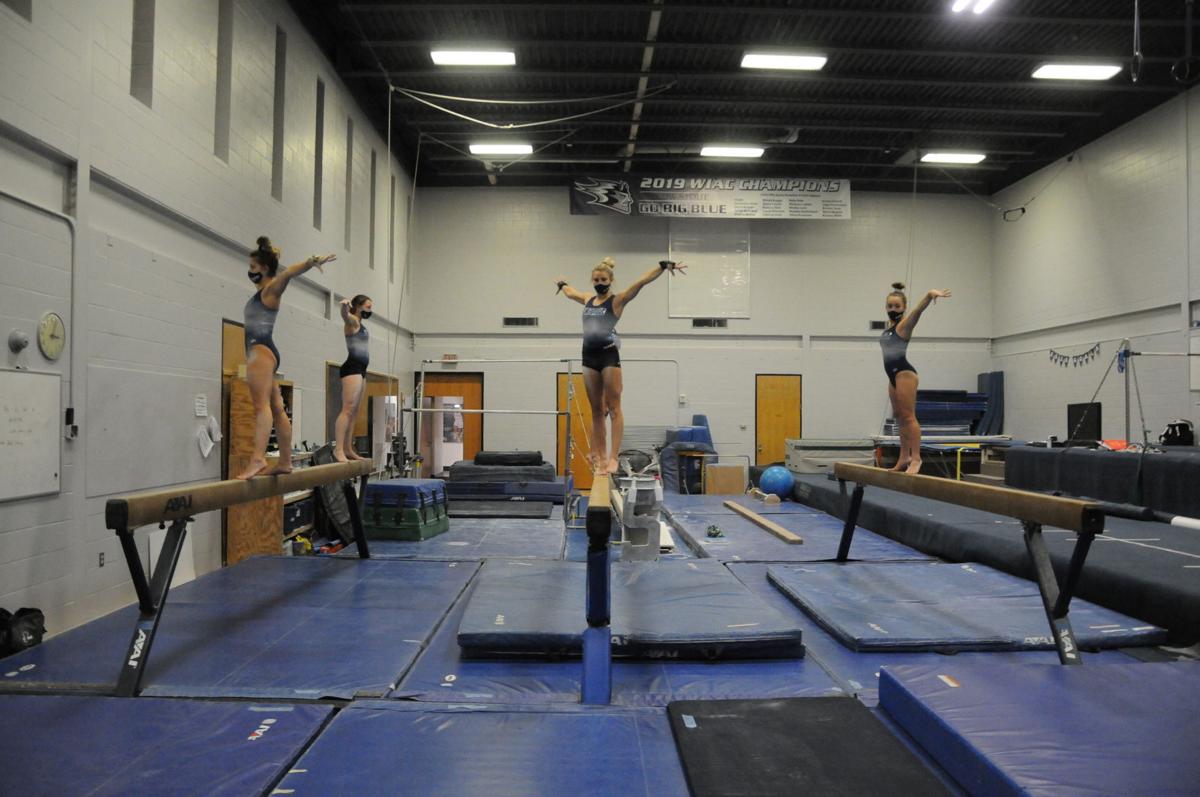 The UW-Stout's gymnatics team takes part in a practice this fall. The squad is set to return to competition this winter.

UW-Eau Claire’s Hallie Sheridan works the puck around the goal against Team China on Friday, Jan. 3, 2020 at Hobbs Ice Center.

The UW-Stout's gymnatics team takes part in a practice this fall. The squad is set to return to competition this winter.

Bree Osborne has often found herself picturing her return to the ice over the last 10 months.

“Since we ended in March, that’s personally all I’ve been thinking about,” said Osborne, a senior defender on the UW-Eau Claire women’s hockey team. “I cannot wait. Fans or no fans, I think it’s going to almost be a sigh of relief. We finally got here.”

This week, she and her teammates took the first step toward making that daydream a reality.

UW-Eau Claire women’s hockey began practicing on Monday at Hobbs Ice Arena, part of the school’s first wave as it nears a return to competition next month. The Blugolds’ athletic department, as well as the entire rest of the WIAC, hasn’t played a game since winter NCAA tournaments were called off last March.

“It’s been 10 months since we’ve been here,” Osborne said. “This is my fourth year, and it’s so weird not getting to be here. Getting to be here, being in a routine and being with everyone is super nice.”

UW-Stout also kicked off winter practices on Monday, with men’s and women’s basketball, men’s hockey and gymnastics competing in full. Track and field has some of its students back as well, Blue Devils sports information director Layne Pitt told the Leader-Telegram.

Finally, local collegiate athletes can be a part of a team again, regaining an enormous piece of their lives and identities.

“We usually start in October, so you get a month at school to get settled, get ready,” Osborne said. “But this year we’ve had three months of just, go to class, do this. It’s kind of hard to find stuff to fill your day with. You spend three hours here, so you have an extra three hours a day.”

The WIAC announced plans to resume winter sports on Dec. 11. The conference intends to put on a truncated, conference-only season that will primarily be played in February.

Millis said Blugold athletes practicing this week took antigen tests before their return. UW-Eau Claire athletic director Dan Schumacher said following the WIAC’s return-to-play announcement that the school plans to use around 5,000 to 6,000 tests this winter if it continues with that method.

Both Osborne and women’s hockey coach Erik Strand said practices have been largely unaffected, though Strand noted opportunities to team build have been shrunk dramatically. Teams are encouraged to quickly exit facilities once practice is over, eliminating time to connect in the locker room and team offices.

“It’s a lot quieter, a lot faster in my office after practices,” Strand said. “The music isn’t on nearly as much, so I don’t know if I’m as up to date as I normally am with the new hit songs.”

Osborne said the team has been able to get together for workouts outside their time on the ice, and a group chat helps keep them connected.

Strand said he has a good idea of what the schedule will look like, though the WIAC has not released the winter slate officially yet for any sports. Of course, like everything in recent history, it is subject to change.

“We just don’t know,” Strand said. “We could get an email tomorrow saying, ‘Hey, something happened.’ ... That’s just the reality of every single sport, not just UW-Eau Claire but around the country. That’s just how you’re living right now.”

The UW-Eau Claire’s women’s hockey team learned that the hard way last year. The Blugolds entered the NCAA Tournament with a high seed and national title aspirations. That was all wiped away, another opportunity lost to the pandemic.

With that in the rear view, they’ll be sure to savor all the opportunities together this year.

“We were three games away from a national championship,” Osborne said. “I think especially for all the returners, it’s like, it could be taken away at any point. You never know when your last shift could be. I think everyone is going to have that extra push on the ice.”