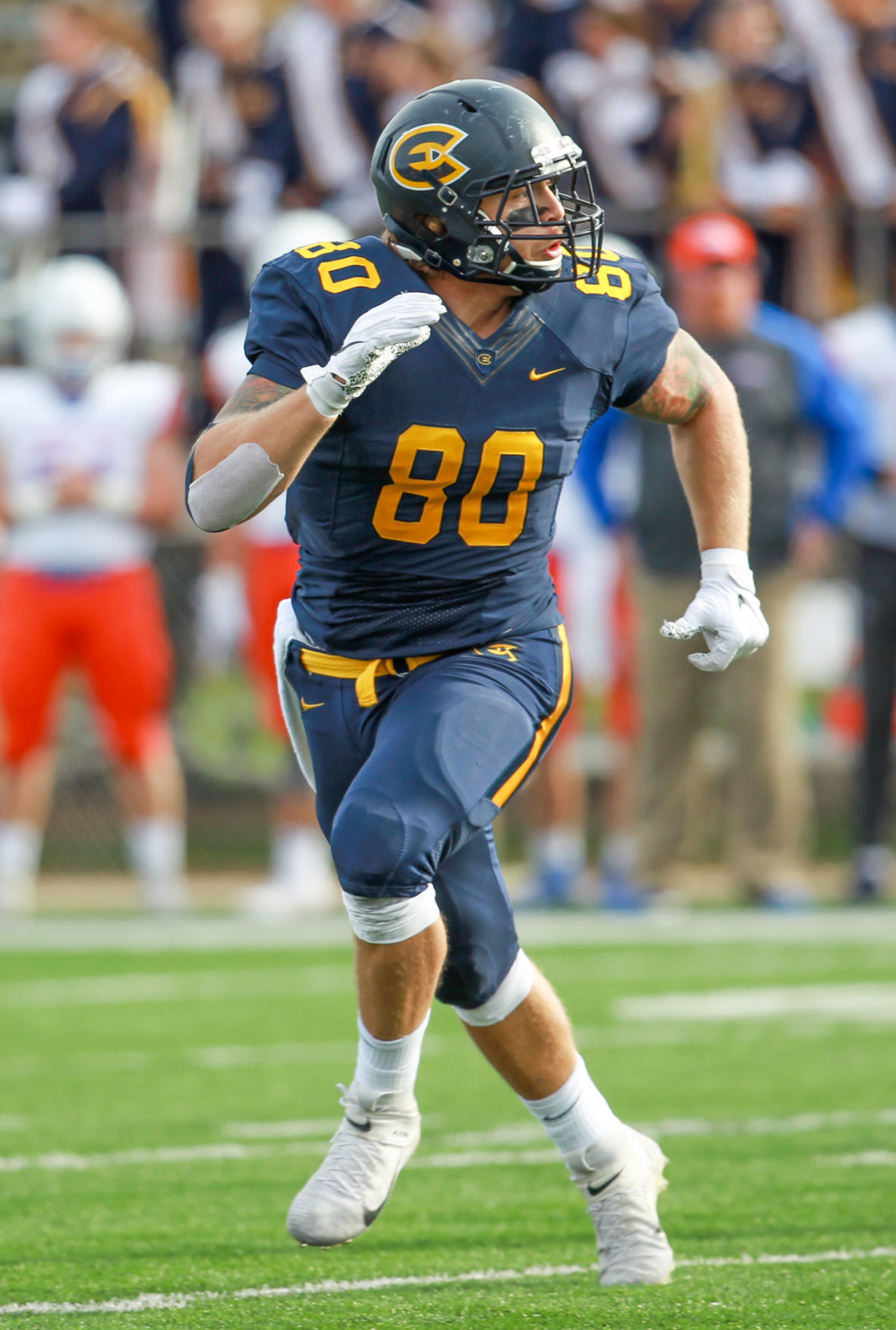 UW-Eau Claire’s Killy Kitzmann works to get open during the Blugolds’ game against UW-Platteville on Saturday, Oct. 26, at Carson Park. 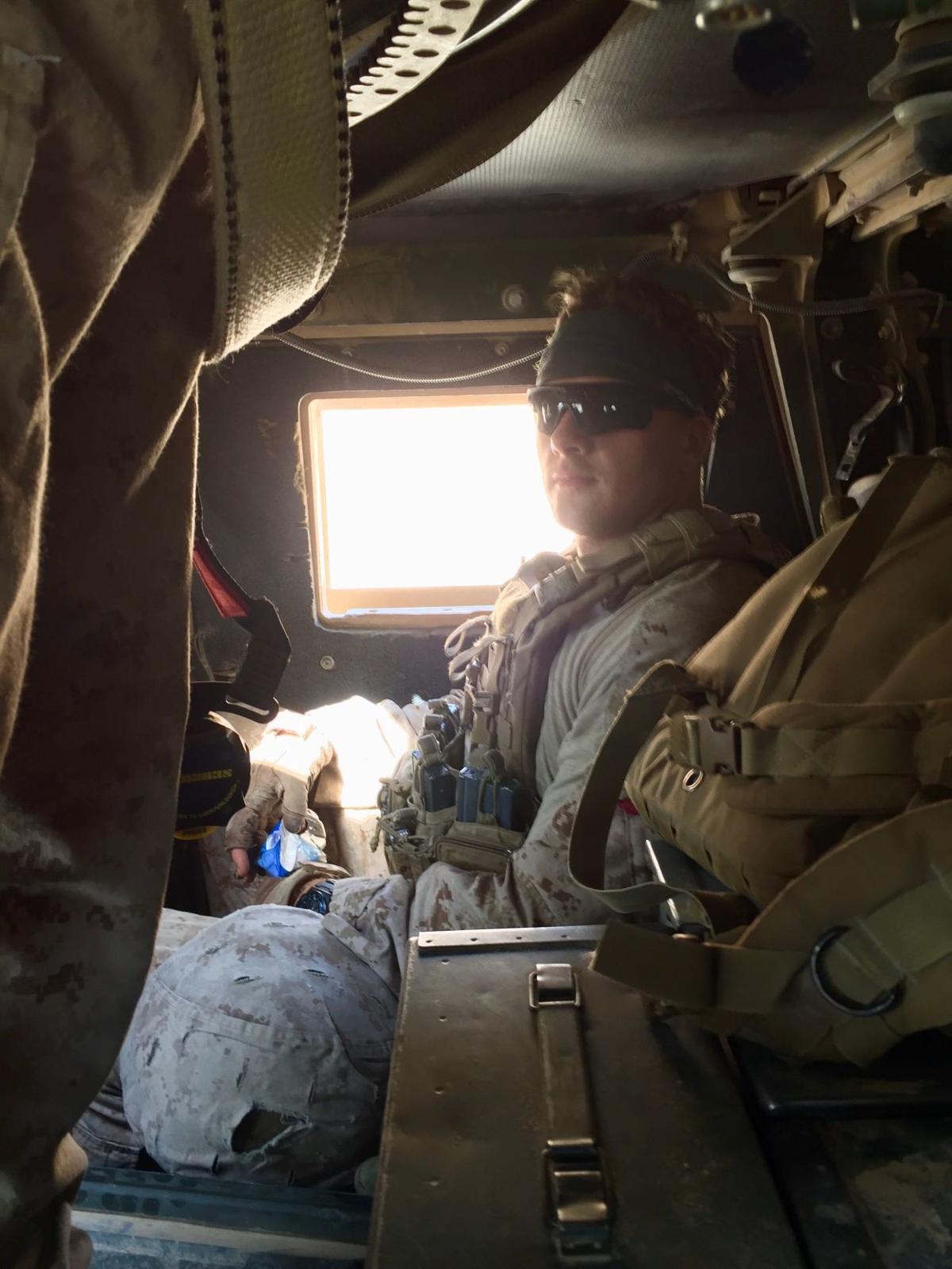 Killy Kitzmann sits in a vehicle in Al Assad, Iraq, during his deployment as a member of the navy. 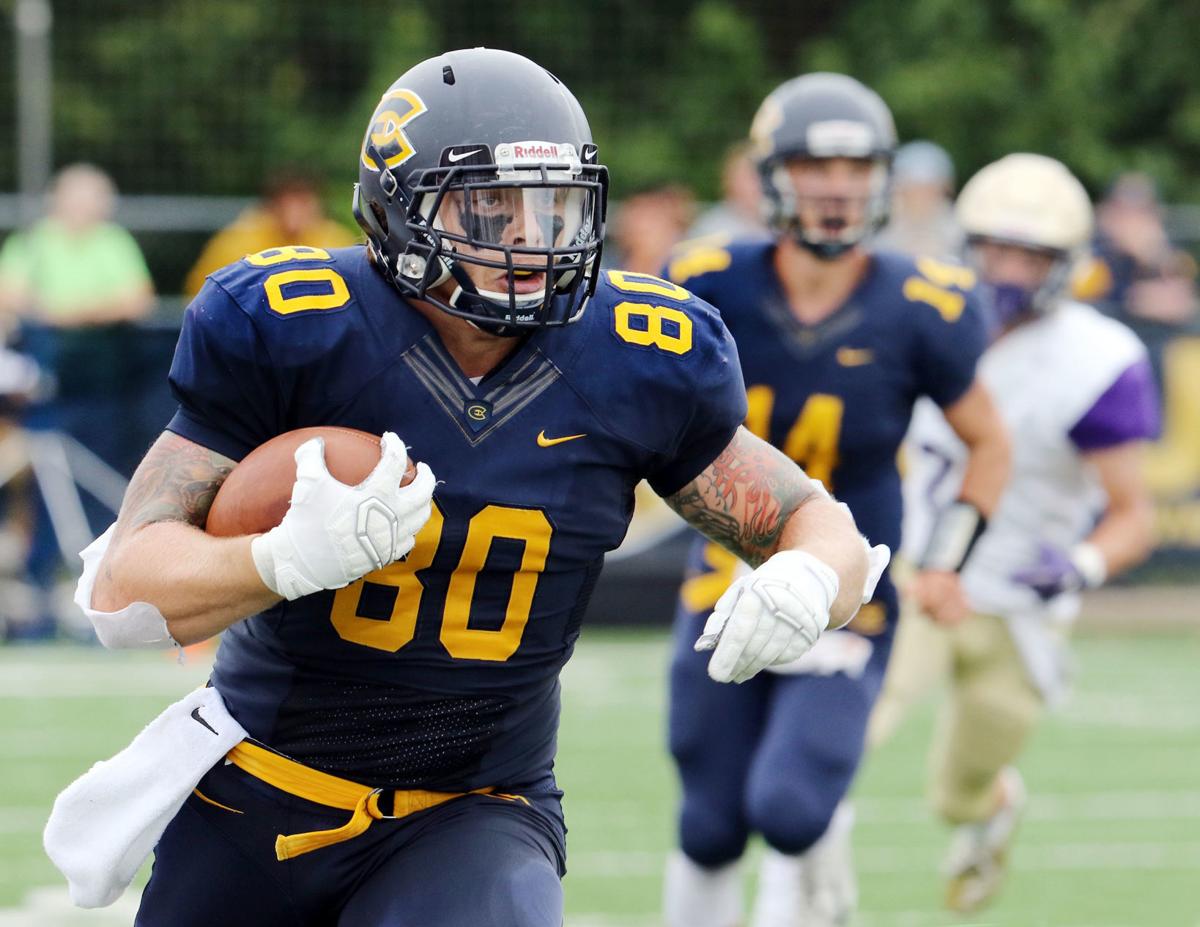 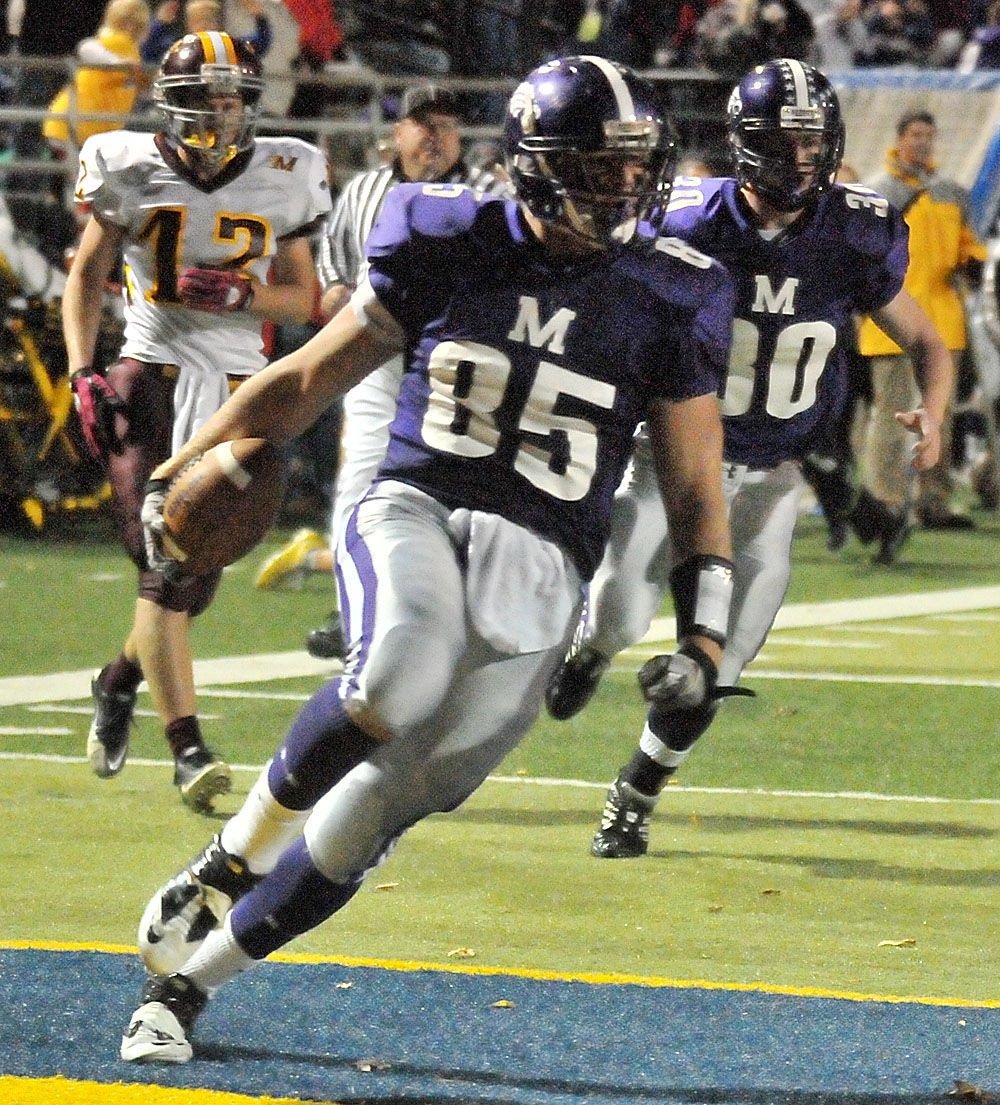 Killy Kitzmann, then at Eau Claire Memorial runs in for a touchdown against Menomonie in 2011.

UW-Eau Claire’s Killy Kitzmann works to get open during the Blugolds’ game against UW-Platteville on Saturday, Oct. 26, at Carson Park.

Killy Kitzmann sits in a vehicle in Al Assad, Iraq, during his deployment as a member of the navy.

Killy Kitzmann, then at Eau Claire Memorial runs in for a touchdown against Menomonie in 2011.

As Killy Kitzmann put it, his teammates call him grandpa for a reason.

He may be the only 25-year-old sophomore football player in the country.

Kitzmann, an Eau Claire Memorial graduate, recently wrapped up his second year with UW-Eau Claire football seven years after he joined the school for his first. In between, he served two stints in Iraq, pursued his passion for medicine and truly matured from a boy to a man.

It helps put the tough days the Blugolds endured this year in better context.

“It’s definitely prepared me for more things than I think most student athletes are really equipped with,” Kitzmann said. “I’m definitely the older guy of the team, but I think definitely with my background, I provide a little bit more of that aspect.”

Kitzmann, a member of the Leader-Telegram all-city team and an All-Big Rivers honorable mention with the Old Abes, originally joined the Blugolds in 2012. The tight end was able to get on the field right away, playing in three games before suffering an injury.

While the ailment was minor, it served as a major wake-up call. Kitzmann, who comes from a military family, knew he had dreams of being a Navy SEAL. Could one bad hit on the field derail that entirely?

“For me, it was kind of that ‘Oops, if I get hurt can that goal still be attained?’” Kitzmann said. “It’s just a violent game. ... That’s the kind of thing you keep in the back of your mind when you have a goal.”

Kitzmann decided to walk away, setting up a meeting when then-coach Todd Glaser to explain his situation. Then he quickly enlisted in the Navy, getting sent off to boot camp in the spring of 2013.

His pre-deployment took him to Illinois, then Texas and finally Camp Pendleton in California. Along the way, a new path manifested itself, thanks in some part to brainstorming with a good friend.

“They always give you a failsafe,” Kitzmann said. “If SEALs doesn’t work out, what job to you see yourself in? Navy provides services for the Marine Corps, and he goes, ‘Dude, be a doc.’ Cause I wanted to be in medicine anyways.”

In San Antonio, he trained to become a medical technician. At Camp Pendleton, he was taught the necessary skills for field service, learning how to become a true combat medic.

It prepared him well for his first deployment, which came in the fall of 2014 and stretched into the spring of 2015.

The Navy isn’t exactly the first branch of the military that comes to mind when thinking about the United States’ presence in Iraq. Kitzmann’s experience reflects that. He wasn’t on a boat at all, instead getting embedded with a marine unit.

“I’ve never been on a boat, never seen the ocean in a Navy capacity,” Kitzmann said. “The joke is (you’re like) a sand sailor.”

There were stressful moments far from home, but the Eau Claire native made it through. He served a second stint in the summer of 2016 before his active service came to an end in the spring of 2018.

Once a member of the inactive reserves, a return to school seemed like the smart decision. He’d already accrued credits during his military training, giving him a head start.

“I just called Eau Claire and asked them what I needed to do,” Kitzmann said. “They said, ‘Actually, you’re still a student here. Your activity has been suspended due to inactivity.’ So, I basically sent in a ‘Hey, I’m coming back’ and that was it. Eau Claire has been super veteran-friendly.”

Football-wise, he benefited from the Division III rules differing from DI and DII. There isn’t the same time clock as the higher levels, where you have 15 semesters to complete your four years of eligibility.

“It’s a blessing for me,” Kitzmann said. “I don’t think a lot of people get to get back time that they lost.”

He’s been able to provide leadership to a Blugold team looking to take the next step under new head coach Wesley Beschorner, whether that’s just answering questions about current events or reminding teammates every setback isn’t in the end of the world.

“Can’t say enough great things about him,” Beschorner said. “Where he’s been in life, the things that he’s done in life, obviously puts perspective that other kids on our team don’t have.”

Kitzmann said he considers himself among the fortunate. He left the military without any serious injuries, just some chronic pain. He’s said the mental side has been even easier than the physical, a blessing considering the high risk for post-traumatic stress disorder for those in combat.

“I was definitely lucky, lucky to come home relatively unscathed,” Kitzmann said. “Me being here is just a testament to the fact that I could not be here.”

Kitzmann’s return has been a blast for the past for fans of the Chippewa Valley. Understandable, considering his senior season of football at Memorial came back in 2011. A handful of Blugold alumni that were seniors back when he was a freshman were shocked he was still around when they returned to watch a game this year.

“They were like, ‘Dude, I thought you were way too old for this,” Kitzmann said. “Here I am though.”

Kitzmann suited up for 10 games with the Blugolds this season and, unlike his rookie year, was able to make an impact in the passing game. He totaled 100 yards receiving on 11 catches, good for fifth on the team and second among tight ends.

“Just a fantastic young man to coach,” Beschorner said. “He’s working every single day to get better and he honestly has gotten better every day.”

He made his official return to the football field on Sept. 7 in the Blugolds’ season opener against Loras at Carson Park.

“During spring ball, I don’t think it really clicks in yet,” Kitzmann said. “I had quite a lot of butterflies. I’ve done quite a bit of crazy stuff for my job, you would think it wouldn’t scare me. But then looking up and seeing however many thousands are watching this game, my first thought was, ‘Don’t mess up.’”

Kitzmann caught five passes in that game for 56 yards, team highs in both categories.

Thanks to his extended absence, Kitzmann could continue to play college football until he’s 28 years old. Whether he will is still up in the air.

“We’ll see how the old body handles that,” Kitzmann said.