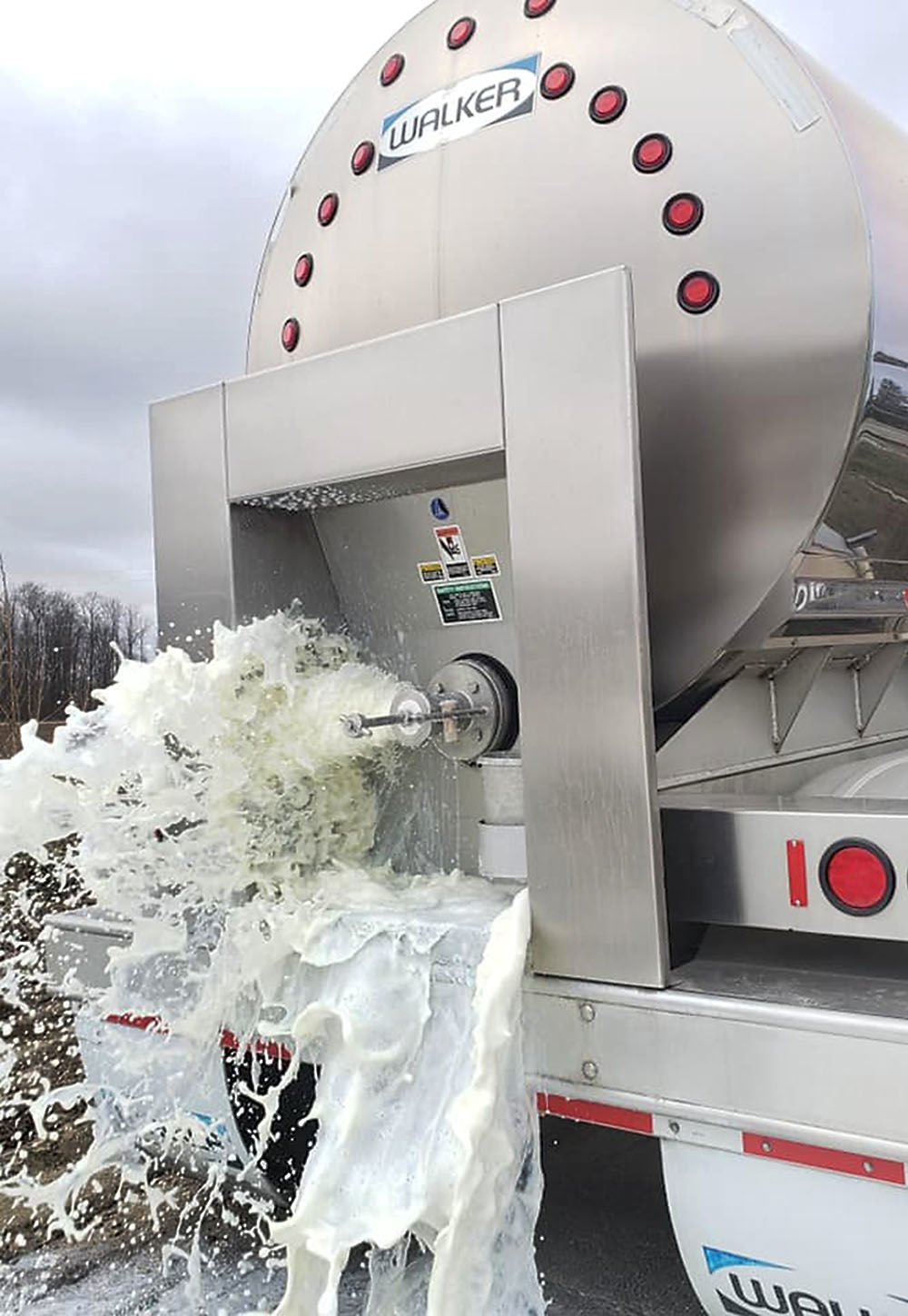 Milk at Golden “E” Farm in Fredonia was dumped starting March 31 after the Elbe family was asked to dump it amid market concerns during the COVID-19 pandemic. 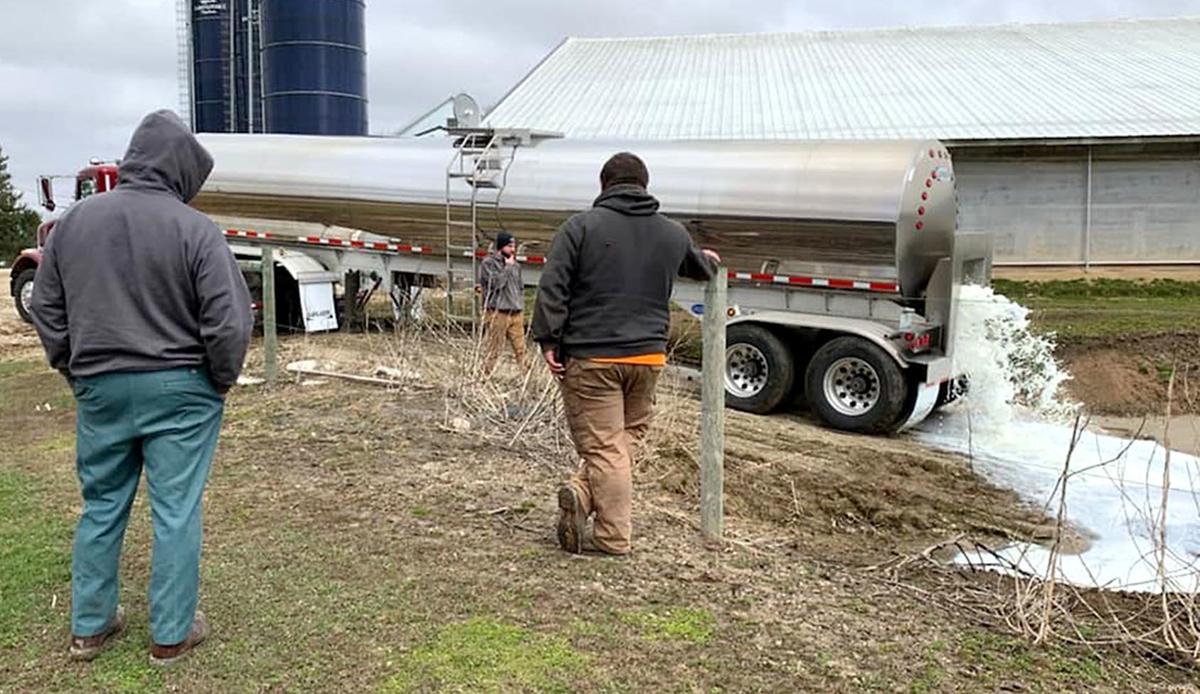 Members of the Elbe family in Ozaukee County watch as 220,000 pounds of milk was dumped from their milk truck on Tuesday.

Milk at Golden “E” Farm in Fredonia was dumped starting March 31 after the Elbe family was asked to dump it amid market concerns during the COVID-19 pandemic.

Members of the Elbe family in Ozaukee County watch as 220,000 pounds of milk was dumped from their milk truck on Tuesday.

Wisconsin dairy farmers who are members of the cooperative Dairy Farmers of America received news this week that no dairy farmer ever wants to hear: that they should consider voluntary dumping of milk amid market concerns during the COVID-19 pandemic.

Kristen Coady, vice president of corporate communications at Dairy Farmers of America, said in a statement that demand for dairy products is changing during the pandemic, ultimately resulting in an overall surplus of milk.

“While we initially saw increased demand at grocery stores as consumers stocked up on many products, like dairy, in anticipation of potential quarantines and shelter-in-place orders, the retail demand is starting to level off,” she said.

Additionally, there has been a reduced need in the food service sector, specifically schools and restaurants.

The sudden changes in demand are forcing some dairy manufacturers to cut or change production schedules as many are already operating at capacity. And in some circumstances, like the one at Golden “E” Dairy Farm in Fredonia in Ozaukee County, some farmers have been asked to voluntarily dispose of raw milk on their farms.

Ryan Elbe, who farms with his parents and siblings, was informed two weeks ago that milk dumping was a possibility and was asked if the farmers would be willing to do it. They agreed, and their DFA central region manager later made the official request for the voluntary dispersal of milk.

“It’s not some — it’s all of it,” Elbe said. “All the milk that was loaded on March 31 was dumped that day, and we’ve been dumping every day since then.”

Elbe has been asked to continue dumping milk from his farm until the middle of next week, disposing of 220,000 pounds of milk every day.

“I don’t know whether or not they’ll have us continue. We should know by Monday if it’s prolonged,” he said. “I hope not, but anything is possible at this point.”

About 10 other larger dairies in southeastern Wisconsin also have been asked to voluntarily dump milk by DFA. Elbe believes that DFA strategically selected larger dairy farms to ask as they have the capabilities to properly dispose of fluid milk and are producing at a larger volume.

“It all happened so fast — we’re still in disbelief that it’s happening,” Elbe said.

Elbe was told that the farm will be reimbursed for the milk it had to dispose of; however, Elbe is unsure if that reimbursement is coming from DFA or from the federal government. He has been keeping close track of all the pounds going down to drain for when that time comes.

As of Thursday, UW-Extension Dairy Outreach Program manager Mark Hagedorn said factors like infrastructure, transportation and processing networks and the lower volume of milk producers in the western part of the state meant that, thus far, farmers being asked to dump milk were primarily fluid-milk producing dairies located in the eastern and southeastern parts of the state.

Tammy Smith Schroeder of Bears Grass Dairy in Augusta said she is thankful they haven’t been asked to dump milk yet on the Eau Claire County farm she owns with her husband, Gary Schroeder, his brother, Don, and their nephew, Donald Honadel.

The family and employees milk about 400 cows twice a day.

“It’s scary. Milk prices are dropping down to where it’s impossible to survive, but it’s better to get something for it than nothing,” Smith Schroeder said. “Employees still have to be paid. The cows still have to be fed.

“Every day, I breathe a little bit easier when I see the milk truck come up the driveway.”

Hagedorn said the volatility of everything surrounding COVID-19 makes it difficult to predict what the impact on the dairy industry will be from one day to the next.

“This is one of the most rapidly evolving and changing situations I’ve seen in the 35-plus years that I’ve been involved with the dairy industry,” Hagedorn said. “I’ve never seen anything like this. It’s difficult to be proactive. And even when you are proactive, you end up coming off looking reactive. That is really very frustrating.”

John Umhoefer, executive director of the Wisconsin Cheese Makers Association, said the biggest hit to his industry comes from the inability to move cheese through food service; about 44% of all U.S. cheese sales are filtered through food service, including schools, restaurants, universities, destinations and institutions. And with 75% of Americans following a shelter-in-place order, “gains made in retail are not able to make up for losses of the closure of hundreds of thousands of restaurants,” Umhoefer said.

The Wisconsin Cheese Makers Association, along with other dairy organizations, submitted a letter to the U.S. Department of Agriculture urging the federal government to provide direct assistance to farmers and to expedite the purchase of additional dairy foods amid unprecedented disruptions in supply and demand.

“Direct relief to dairy farmers and a substantial purchase of dairy commodities by USDA can ensure our industry will remain fiscally able to function in its primary role of feeding the nation and the world,” the letter said.

“People in the processing industry are working non-stop and everyone is talking with everyone to make sure milk stays flowing in the state,” Umhoefer said. “It’s devastating to see milk that doesn’t get processed so when we can reach out, like we did to the USDA, that’s very important.

“I just want people to know the industry is working tirelessly here to get the milk processed and to cooperate with each other to make sure we can get the milk into the system and into great dairy products.”

The Wisconsin Department of Agriculture, Trade and Consumer Protection, under the direction of Gov. Tony Evers, also penned a letter urging the USDA to step in and support the dairy industry amid concerns about milk disposal during the COVID-19 pandemic.

“With agriculture’s massive $104.8 billion impact on Wisconsin’s economy, it is critical that all of us in this industry work together to navigate this new territory,” said Randy Romanski, DATCP interim secretary. “DATCP has been in constant communication with people in all parts of the industry and hearing their concerns, including concerns about milk disposal. That’s why we’re urging the USDA and Wisconsin’s congressional delegation to take immediate action to keep the supply chain flowing and get product in the hands of people who need it most.”