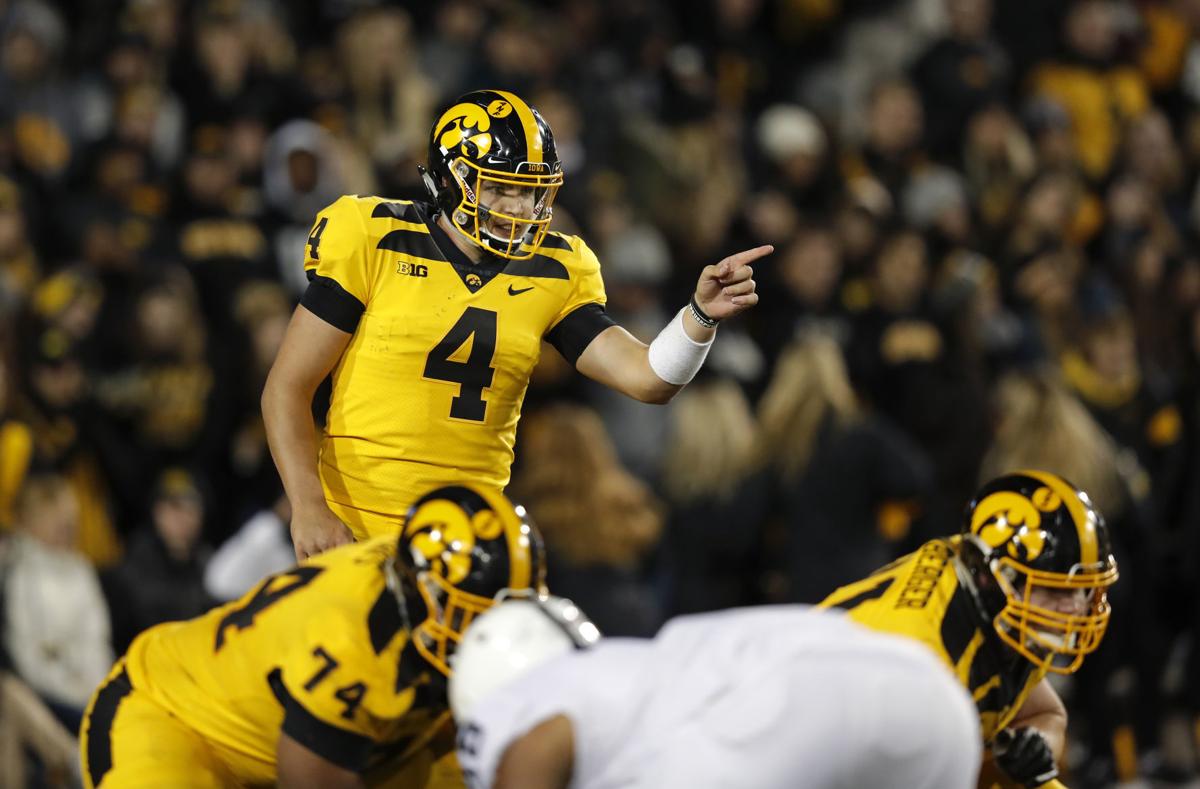 Iowa quarterback Nate Stanley, a Menomonie native, directs the offense during a game against Penn State on Oct. 12, 2019, in Iowa City, Iowa. 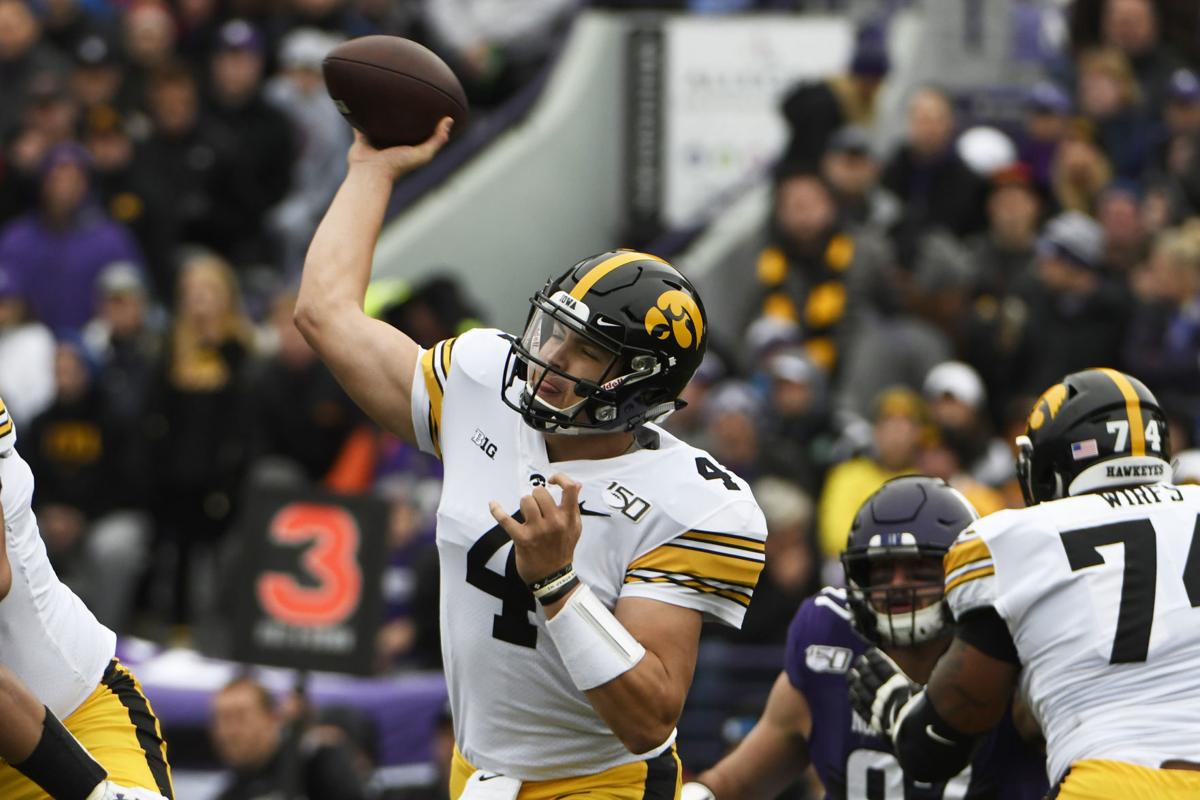 Iowa quarterback and Menomonie native Nate Stanley passes against Northwestern during a game on Oct. 26, 2019 in Evanston, Ill.

Iowa quarterback Nate Stanley, a Menomonie native, directs the offense during a game against Penn State on Oct. 12, 2019, in Iowa City, Iowa.

Iowa quarterback and Menomonie native Nate Stanley passes against Northwestern during a game on Oct. 26, 2019 in Evanston, Ill.

The signs were there early on. This could be something special.

Nate Stanley’s potential manifested from a young age. Whether it was on the football field, the basketball court or the baseball diamond, you could see.

“He was always ahead of a lot of the other kids,” said Menomonie football coach Joe LaBuda, who also coached Stanley in Little League. “You could see the potential he had even at that age, playing youth baseball. He was a pretty gifted young man even back then.”

Flash forward 10 years or so, and that man is set to showcase a different kind of potential.

This time Stanley’s not just impressing a handful of spectators in the bleachers. He’s looking to wow the world’s most prominent football minds and earn a spot among the best in the business.

The Menomonie native, fresh off a standout career as Iowa’s quarterback, is expected to be picked in this week’s NFL draft.

“It’s pretty cool,” Stanley said at the NFL scouting combine in February. “I can’t think of many other players, quarterbacks in particular, that have went on from Wisconsin to play in the NFL.”

Where the quarterback might be taken is anyone’s guess. Mock drafts have him being selected anywhere from the third round to the late rounds. NFL.com grades him as a projected fifth-rounder.

But however the chips fall, ultimately, everything indicates that Stanley will become a professional football player in the coming days.

It will bring a lifetime spent around the game full circle.

That much was clear during his three years as Iowa’s starting quarterback.

Stanley ranks second in Iowa history in career touchdowns (68) and passing yards (8,302). He’s one of only two Hawkeyes quarterbacks to ever post a 3-0 record in bowl games.

He earned the starting job as a sophomore and never looked back.

On top of his noted leadership ability, he brings a lot to the table for NFL executives to consider.

There’s the rocket arm that helped him throw for five touchdowns in a stunning upset of sixth-ranked Ohio State in 2017. He’s got the size that scouts look for as a 6-foot-4, 235-pound presence in the pocket. And he’s durable, never having missed significant time with injury while at Iowa.

Off the field, his score on the Wonderlic test — an assessment which measures cognitive ability and problem solving skills — is sure to impress. Bob McGinn of The Athletic reported Stanley scored a 40, which was the best result by any draft-eligible quarterback this year. It’s also one of the more notable results from an NFL player in history. Few have ever been reported to score higher than 40, and only one has ever reported a perfect score of 50.

And Stanley’s character will never be off-putting, according to LaBuda.

“He’s a non-risk (character-wise),” the member of the Wisconsin Football Coaches Association’s 2020 Hall of Fame class said. “Sometimes you have a player like Johnny Manziel where you know they’re talented, but you worry about their character issues in the past. (Stanley) has a zero-factor as far as ever getting in trouble or having character issues. He’s one of those guys that’s always going to do what’s right. He was raised right.”

Stanley still has doubts to overcome between the sidelines though. Many reports reference a concern about throwing accuracy, something Stanley acknowledged he has been working on.

“I felt that I had decent touch earlier in my career as well, but it really was more of a focus after my sophomore year,” he said at the combine.

Given the state of the world under the coronavirus pandemic, Stanley has needed to be a lot more strategic about showcasing himself to NFL teams than those in the draft classes of the past.

His scheduled pro day was canceled, but he was able to get in front of scouts at the combine. There, he ran a 4.81-second 40-yard dash, which put him eighth among the 13 quarterbacks to participate in the drill.

But beyond the combine, he’s needed to send teams video of his workouts in Menomonie to give them more to analyze.

“Basically what they’ve done is FaceTime a lot of NFL teams and quarterback coaches. But that’s still not replacing the pro day,” LaBuda said. “I think he has enough of a resume with what he’s done as a three-year starter in the Big Ten. That should carry him through, and he had a good combine.”

He was able to meet with teams informally early in the draft process. Recently, the number of teams he has regularly spoken with has been 10 to 12, Stanley told the Des Moines Register in mid-April.

“One thing I’ve told the NFL people,” Iowa coach Kirk Ferentz said on The Doug Gottlieb Show in early April, “is that you’re not going to find a better guy who is so conscientious, work harder, and he’s got a great mental toughness and poise. Just all the things you’re looking for in a quarterback.”

It sounds similar to what LaBuda has said.

“People don’t realize how hard he works. He is relentless,” LaBuda said. “And one of the things that’s really impressed me about his whole journey here is that he’s the same person he was in high school. He’s a great Christian young man, and he has not changed who he is one iota. He’s not arrogant, he’s a very humble young man. And he’ll remain that way. That’s who he is.”