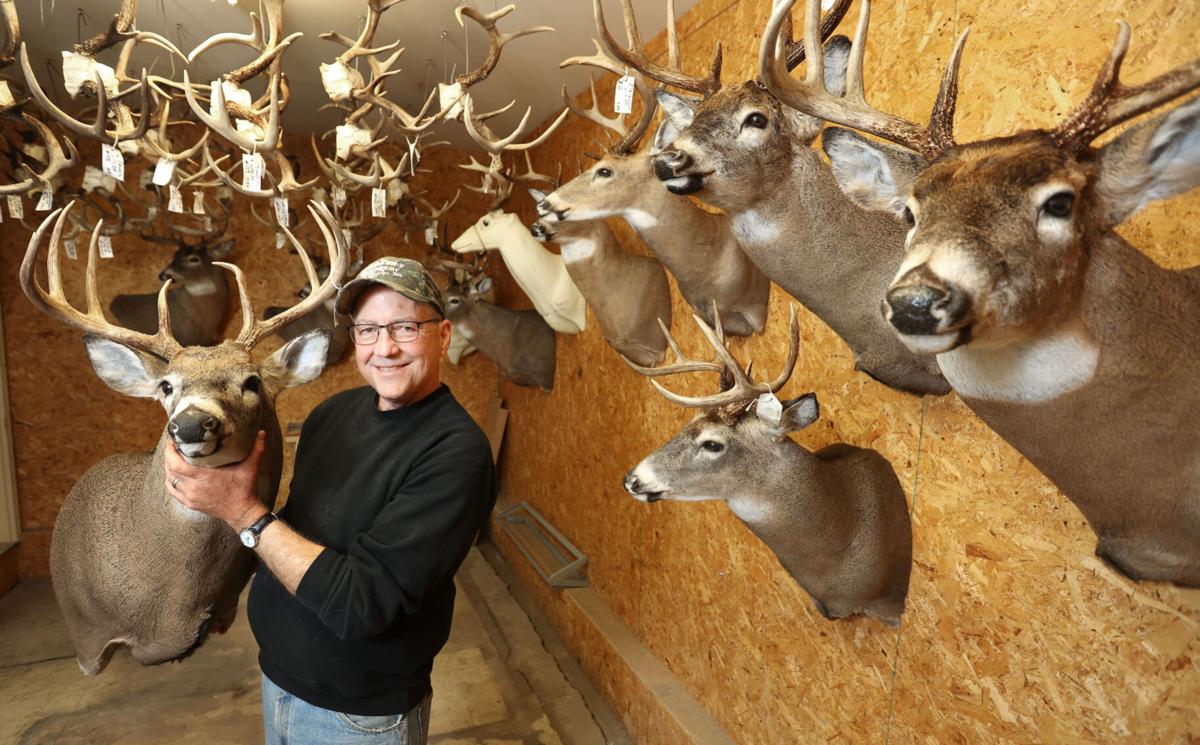 Mike Buroker, owner of Buroker’s Taxidermy, Bait & Tackle on Birch Street for the past 36 years, plans to close the shop later this month and continue only his taxidermy work from home. View more photos at LeaderTelegramPhotos.com. 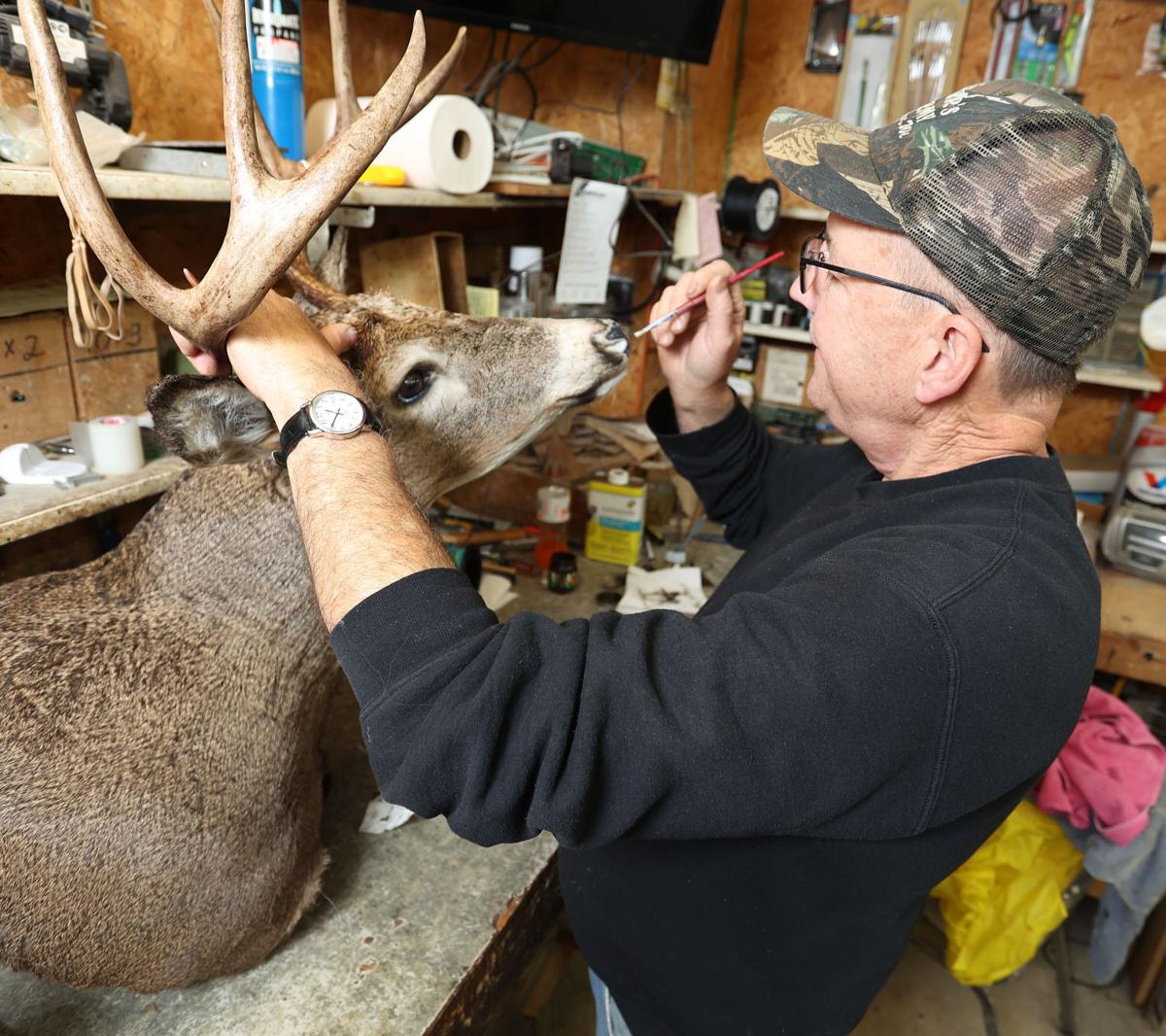 Mike Buroker works on a deer mount recently at his shop, Buroker’s Taxidermy, Bait & Tackle, which he expects to close this month.

Mike Buroker, owner of Buroker’s Taxidermy, Bait & Tackle on Birch Street for the past 36 years, plans to close the shop later this month and continue only his taxidermy work from home. View more photos at LeaderTelegramPhotos.com.

Mike Buroker works on a deer mount recently at his shop, Buroker’s Taxidermy, Bait & Tackle, which he expects to close this month.

EAU CLAIRE — Anglers who visited Buroker’s Taxidermy, Bait & Tackle over the years always knew they would get a little something extra with their purchase of minnows, hooks or fishing line.

The bonus might be a fish story, advice about lures to target a certain species or a tip about the latest fishing hot spot.

It’s the kind of personal touch people have come to expect from a neighborhood bait shop and something that soon will be missing from Eau Claire. The last of the city’s once-prevalent mom-and-pop sport shops closes later this month.

Owner Mike Buroker launched the small business as a taxidermy shop on South Barstow Street in 1977 and has operated Buroker’s Taxidermy, Bait & Tackle at 1721 Birch St. since 1985. After 44 years of running the solo operation, Buroker said it’s time to cut back. He plans to close the shop in mid-May but continue to operate the taxidermy business out of his home.

“It’s bittersweet,” Buroker said. “I’m looking forward to some time off, but I will miss the people. The people are what makes it go.”

It’s clear from comments on the shop’s Facebook page, where he recently announced the closing and an inventory clearance sale, that his customers will miss him as well. Dozens of customers raved about Buroker’s service and bemoaned the impending loss of a community icon.

Brook Jorgensen wrote that the shop has been part of her life for many years. As a child growing up in the neighborhood, she used to love stopping by to look at the minnows, and then as an adult she often has visited to get fishing line respooled, buy tackle or use the bait vending machine after hours.

John Kreiner of Eau Claire said in an interview he’s been going to Buroker’s for 21 years, typically stopping to buy minnows every other week during ice fishing season and always appreciating the chance to chat up the owner.

“Mike’s store and his service have always been top-notch,” Kreiner said. “He knows where the fish are, where they’re biting, how thick the ice is and what guys are using. It’s just so refreshing to be able to go to a bait shop like his. I’m going to miss it.”

Aaron Zillmer of Eau Claire told the Leader-Telegram he has been a regular at Buroker’s for more than 20 years because of the personal service and the proprietor’s love for the outdoors.

“When you would go into his shop and tell him your war stories about battling the lunker largemouth, you’d see him light up and really engage with his clientele,” Zillmer said. “He made sure you knew what you were buying. It never felt like a business model stepping into his bait shop. He always had a way of making it seem personal to you. That’s something that no retail giant can ever bring to the table.”

For Buroker, like many small-business owners, it has been increasingly difficult to compete with large discount stores and other national and regional retailers.

Customers sometimes complain that he charges a bit more for a scoop of minnows than a chain store, but the markup is necessary to make a profit, he said.

“I can’t afford to sell things cheap like the big stores,” Buroker said. “You’re just a one-man show and they all want me to be Walmart.”

Such business realities are a sign of the times — and a key reason a city that once had several small bait shops is about to lose its last one.

“They all went the way of the dinosaur,” Buroker said. “If I didn’t do taxidermy, I would have gone that way too.”

The taxidermy aspect of the business is stronger than ever, he said, explaining that the influx of new hunters and anglers seeking outdoor refuge during the COVID-19 pandemic led to more people having success and wanting to preserve a record of their trophy buck or muskie with a mount.

“My business has been absolutely nuts,” Buroker said. “I had my best deer mounting season in 44 years. I quit taking fish until September because I have all I can handle right now. I have 50 now and I turned away 25 more.”

As a result, he stressed, “It’s not like I’m retiring. I’m taking a full-time job home with me.”

The national surge in fishing gear sales also came with drawbacks, such as the inability to obtain merchandise to restock the shelves last summer.

In the shop’s final days, Buroker faces the opposite challenge. No longer acquiring inventory, he is seeking to sell every last item before he closes the doors for good, vowing, “I’m not taking one piece of it home with me.”

Zillmer said the closing signifies more to the community than most people realize.

“It’s the ending of an era. It means no more personal touch to a very heartfelt tradition that many of us are passing on to our children,” Zillmer said. “While I selfishly ponder my emotions around his closing, I am beyond grateful I was able to have him and his passion for the outdoors at my fingertips. He will be missed, but he will also be remembered by many of us as a guy trying to make a living doing what he loves.”