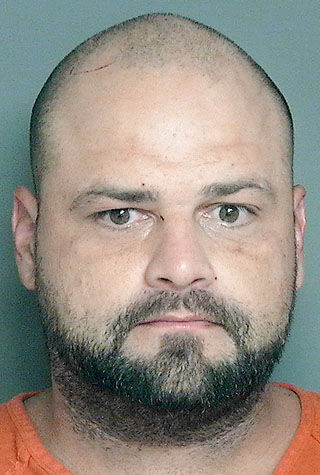 An Eau Claire man will spend four years in prison for his third felony methamphetamine-related conviction within six years.

As conditions of supervision, Blomberg cannot drink alcohol, enter taverns or have contact with known drug dealers or users.

Blomberg must also undergo an alcohol and drug assessment, and any recommended programming or treatment.

An Eau Claire police officer was sent just before midnight on Sept. 25 to the Kwik Trip on Black Avenue on a report of a car that drove over the curb and nearly struck the gas pumps.

The officer arrived to find the car in the east end of the parking lot, away from the gas pumps.

The vehicle was running and Blomberg was in the front passenger seat.

Blomberg’s eyes were closed as if he was sleeping, but his arms and legs were moving around in the passenger seat.

Blomberg, who had a backpack on his lap, was awakened by the officer. He was dazed and disoriented.

Blomberg could not get out of the car and had to be pulled out.

He was handcuffed and placed in a squad car, where he immediately fell back asleep.

Officers searched the vehicle and found a large number of clean gem packs, which are typically used to store illegal drugs.

Blomberg was taken to the Eau Claire County Jail, where a used hypodermic needle was found in his right front pocket. The needle contained a small amount of brown liquid.

Blomberg was convicted of felony counts of methamphetamine delivery in June 2014 and September 2016, both in Eau Claire County.