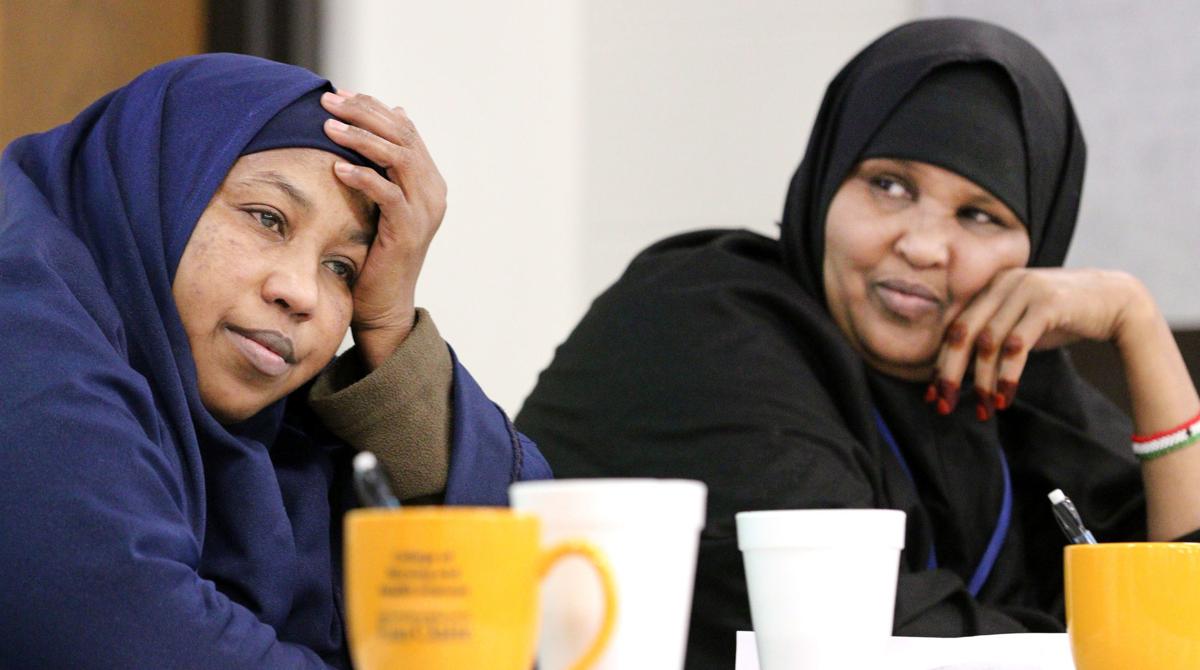 Hawa Hassan, left, and Fadumo Hassan of Barron paused while an interpreter explained how their children have not been reunited with them after years of waiting. They spoke during “Refugees & Immigrants in Barron County: The Voices of Despair & Hope” Thursday at UW-Eau Claire. View more photos at LeaderTelegramPhotos.com. 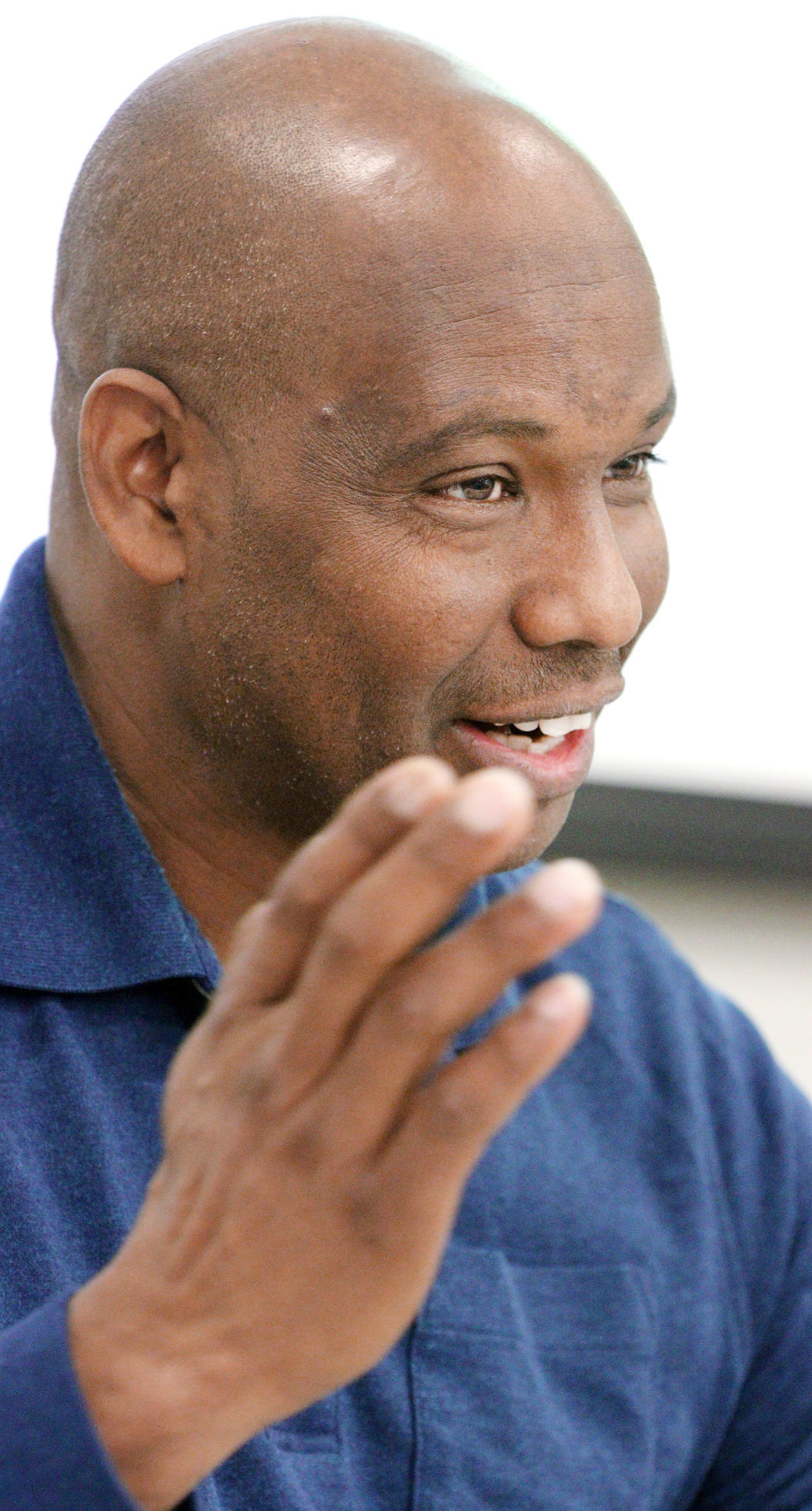 Abdinasir Abdi spoke about life in Barron as a refugee during “Refugees & Immigrants in Barron County: The Voices of Despair & Hope” Thursday at UW-Eau Claire.

Hawa Hassan, left, and Fadumo Hassan of Barron paused while an interpreter explained how their children have not been reunited with them after years of waiting. They spoke during “Refugees & Immigrants in Barron County: The Voices of Despair & Hope” Thursday at UW-Eau Claire. View more photos at LeaderTelegramPhotos.com.

Abdinasir Abdi spoke about life in Barron as a refugee during “Refugees & Immigrants in Barron County: The Voices of Despair & Hope” Thursday at UW-Eau Claire.

Some Somali-Americans in western Wisconsin have been separated from their children and family members for several years, and stricter immigration policies have made reunification harder, several Barron residents said Thursday at UW-Eau Claire.

Barron is home to hundreds of Somalis. Many fled war and conflict in Somalia in the late 1990s and 2000s.

Though the refugees have made homes in Barron, some having become American citizens, many are still waiting for word of their families.

Some don’t know where their children are. They also don’t know how long they’ll wait to be reunited.

“When I came to the U.S., I was thinking my children would join me in six months,” Hawa Hassan said Thursday at UW-Eau Claire through an interpreter, Barron resident Abas Moalin.

But Hassan hasn’t seen her three children for six years, since September 2013.

Hassan and three other Somali-American Barron residents, who are or are in the process of becoming U.S. citizens, spoke Thursday in a presentation, “Refugees & Immigrants in Barron County: The Voices of Despair & Hope,” hosted by faculty members of the UW College of Nursing and Health Sciences.

A several-country travel ban and what President Donald Trump has called “extreme vetting” has made family reunification for Barron Somalis a longer process, said Nancy Pike, a member of bipartisan group Immigration Advocates of Barron County.

Despite stricter immigration rules during Trump’s administration, the Barron residents who spoke Thursday said they were grateful to the U.S. and the Barron community.

Fadumo Hassan, who runs Bushra Fashion Shop in Barron, estimates there are over 600 Somalis in the city.

After the presentation Thursday, Pike rattled off directions to Fadumo’s store: It’s off U.S. 8, turn left after the Dollar General. Fadumo nods and adds: “Next to the mosque.”

Fadumo, who’s lived in the city for seven years, has two sons; she’s waiting for them to join her in Barron.

Another Barron resident, Abdinasir Abdi, has lived there for four years. He’s a native of Somalia but was a refugee in Malta before traveling to Wisconsin; his family hasn’t joined him yet. He has 10 children, he said.

During his 2016 campaign Trump championed an “extreme vetting” process for would-be United States immigrants. In 2017 Trump tweeted that he had ordered the Department of Homeland Security to “step up our already Extreme Vetting Program.”

Vetting for refugees seeking asylum has been stepped up since then, Pike said, adding that some refugees who had passed medical interviews and were preparing to buy plane tickets to the U.S. were bounced back to the beginning of the process.

The travel ban does have an allowance for “close family” members; but that doesn’t mean Barron Somalis’ children’s asylum requests will be automatically approved, Pike said.

A friend of Pike’s with four teenage children living in Kampala, Uganda’s capital, didn’t have a way to speed up the teenagers’ requests when the teens’ caretaker died.

“There’s no formal apparatus created … there’s no way to file for a waiver, you just have to kind of hope that your case gets pegged as being appropriate for an exception,” Pike said. “It’s a really tricky situation in so many ways.”

Would-be immigrants often have two options, Pike said. An existing refugee or someone who was granted asylum can file an I-730 petition for a spouse, and/or children under 21, to join them in the U.S.

A more expensive option is the I-130 petition, a petition to allow a family member of a citizen or U.S. lawful permanent resident to immigrate to the U.S.

But high costs can be a barrier to many immigrants, especially those with large families, Pike said.

The I-130 petition carries a $535 nonrefundable filing fee, according to U.S. Citizenship and Immigration Services. Families also have to pay for DNA testing, provide proof of health insurance and buy plane tickets, Pike said: “That’s another really hard way to get people here.”

Somali-Americans in Barron take pride in supporting themselves and their families financially, and they are a core workforce at the city’s Jennie-O turkey processing plant, said Pamela Guthman, a UW-Eau Claire assistant nursing professor, who co-organized the presentation Thursday.

“I don’t know how they’ve done what they’ve done,” Guthman said, praising their “resiliency and independence.”

Nearly 3 million Somalis are displaced, either within the country itself or registered as refugees in Africa, according to UNHCR, the United Nations Refugee Agency.

“We thank the U.S. government for helping us … we really love our U.S. cities … they give us help when we need help,” Abdi said.