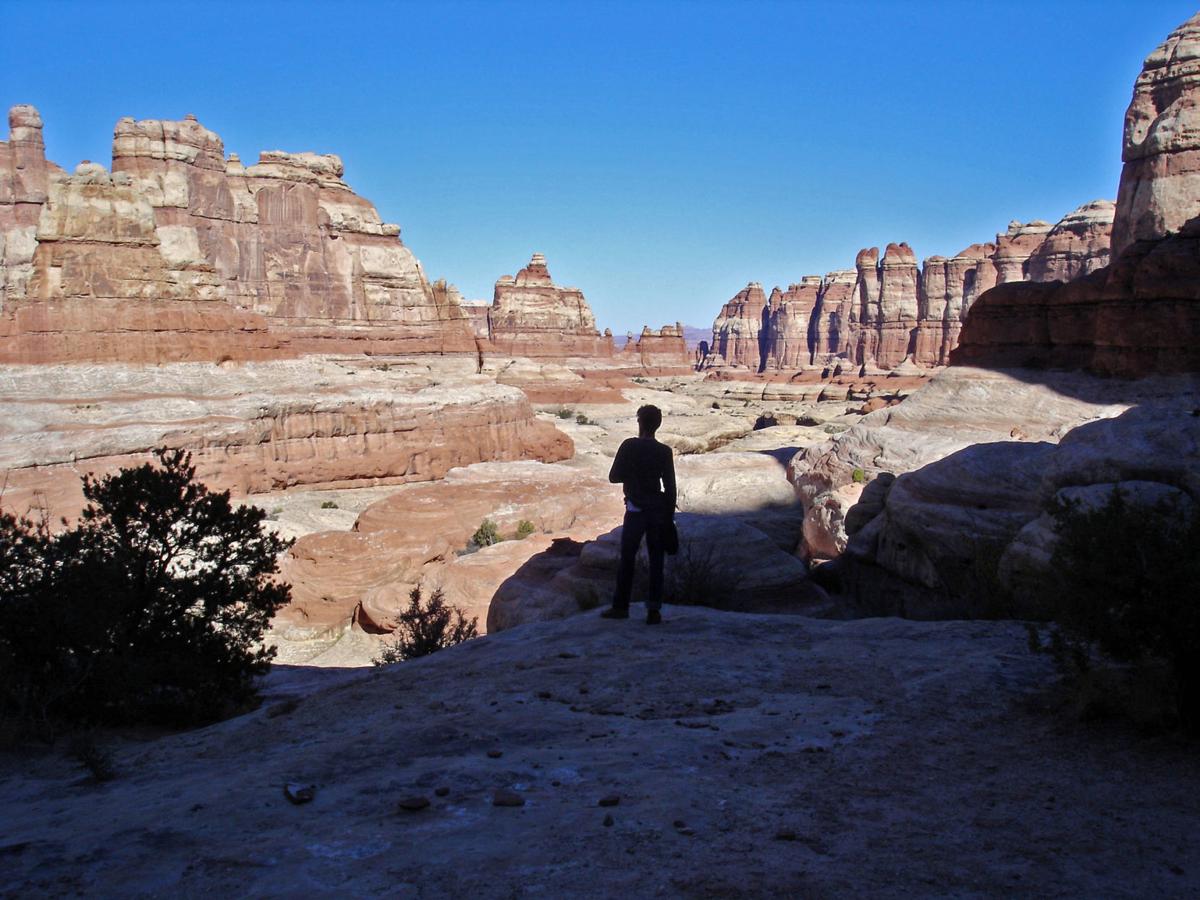 Top: Davyd Betchkal looks into Elephant Canyon in Canyonlands National Park, Moab, Utah, on a camping trip with his father and brother. 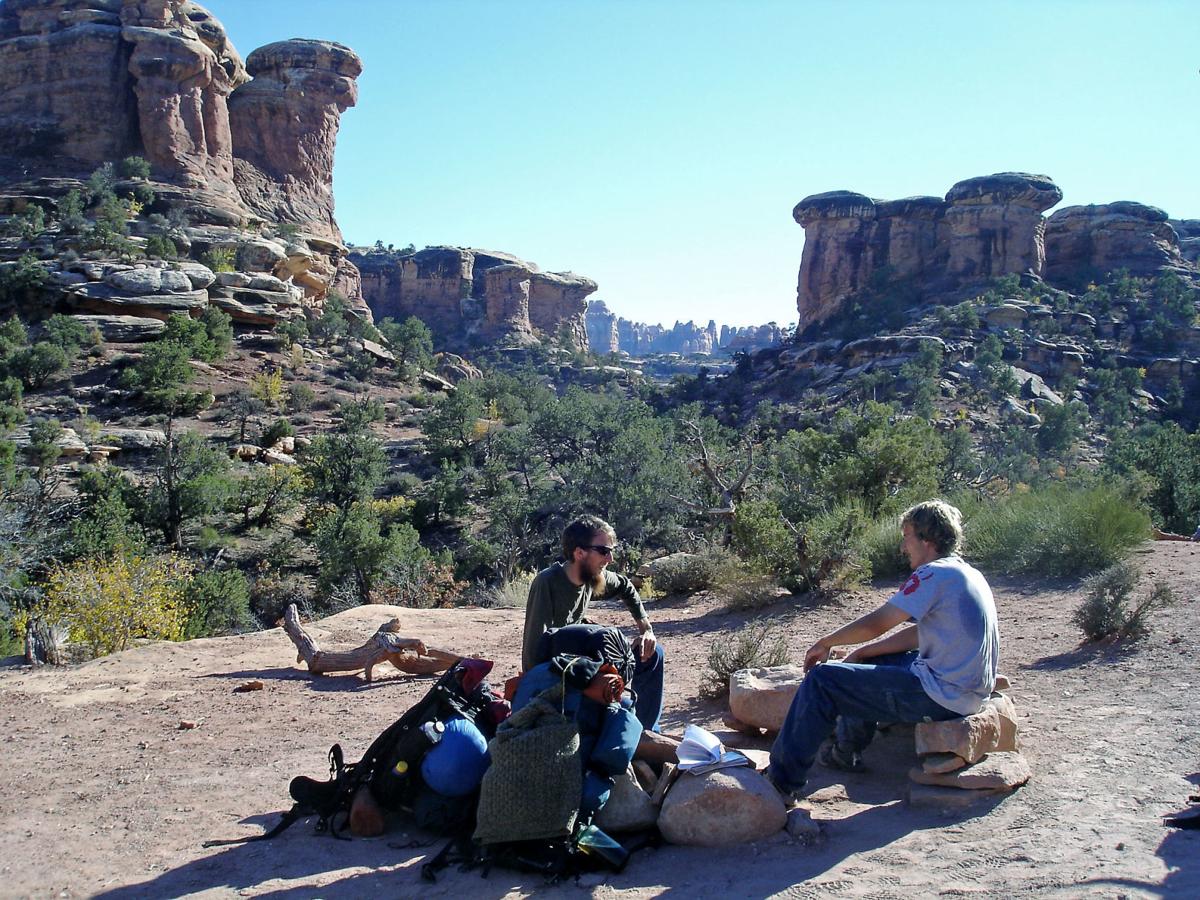 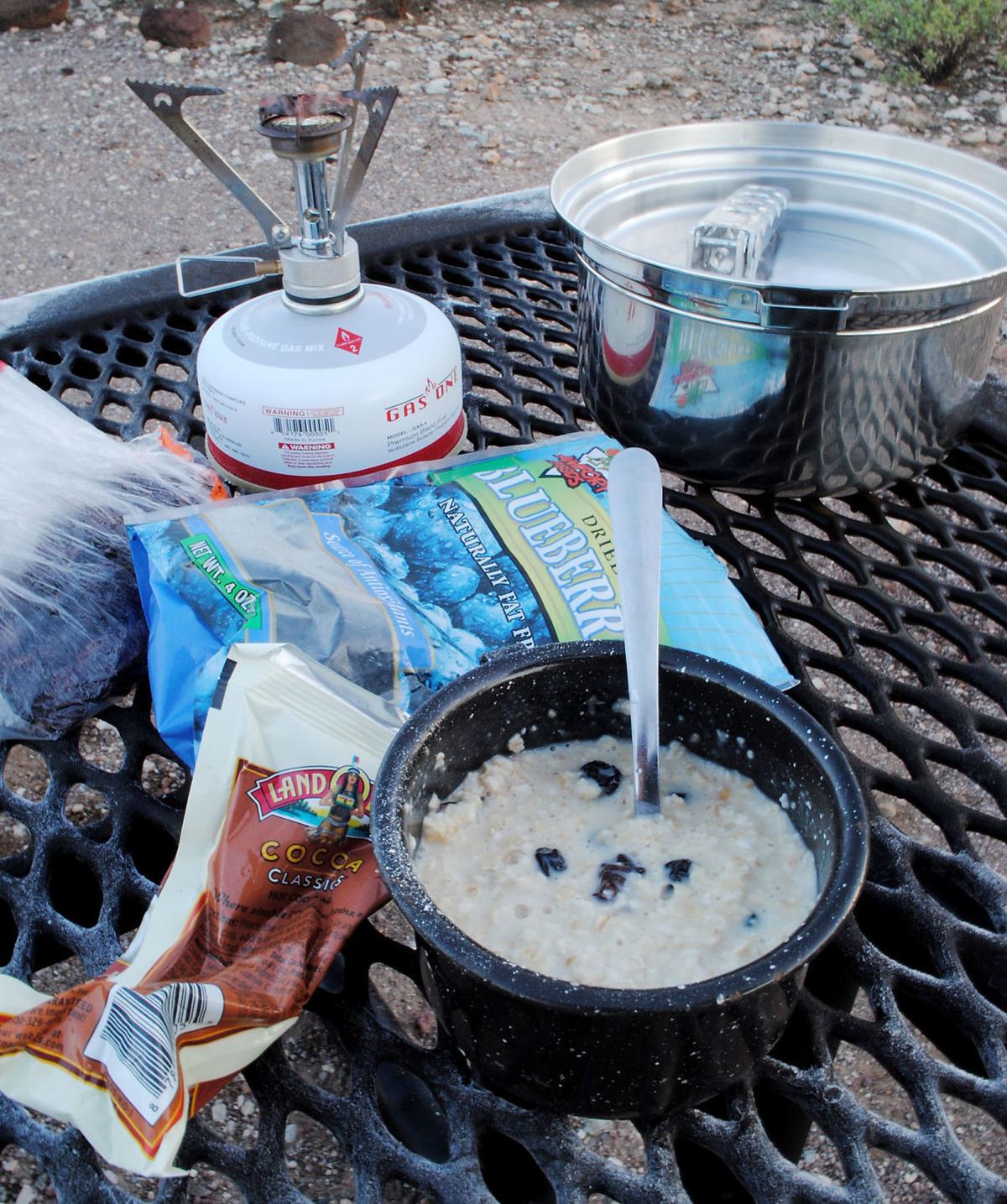 Camping is about making adjustments along the way, including meals.

Top: Davyd Betchkal looks into Elephant Canyon in Canyonlands National Park, Moab, Utah, on a camping trip with his father and brother.

Camping is about making adjustments along the way, including meals.

It was late and feeling later when we turned off Highway 191 into Arches National Park, in Southeast Utah. We’d been driving for seventeen hours — the last five in the dark — and all my two sons Davyd and Emerson and I wanted was to shed the cramped car. We followed our headlights groggily around the sweeping curves searching desperately for the Devil’s Garden Campground. Creeping through the black desert night at 25 mph, it felt like we’d never get there.

The moment we pulled into site No. 26 we had our energy back. We’d reserved the site — just to play it safe — but the campground was empty as a forced apology. Davyd had made us supper — a pre-cooked batch of chili. We started a nice fire for warmth and lit the backpacking stove. In minutes we were enjoying the sustenance of hot food and cold beer.

After eating, the next item of business would be getting to sleep. As we unloaded the gear, Davyd lingered behind, rummaging through the trunk.

Emerson and I stared blankly at him. It was 10 at night. The stars were out, but the wind was blowing hard. It was already so cold that it was difficult to leave the comfort of the fire.

For the second time that evening I felt panicky. Initially. Then experience and reason kicked in.

You see, forgetfulness is a Betchkal tradition.

There are too many incidents to list, I promise you, but allow me to provide — for the sake of entertainment — a few examples while the three of us search the car more thoroughly….

There was the time we forgot a bag at the Miami airport and caught the shuttle to pick up our rental vehicle. When we finally discovered the bag missing and returned to the terminal, it was sitting right where we left it — on the curb outside the baggage claim — guarded by two taciturn and very surly police officers and a bomb-sniffing dog.

“Oh! Thank you, officers!” Julie said as she wheeled the cart away and the two glared at her. The rest of our visit to Key West was delightful!

There was the time Julie and I drove the 1.5 hours to the Minneapolis airport for a flight to Phoenix. When we checked into the hotel, I discovered I’d neglected to pack my ID. So, I did what forgetful people do; I drove the hour-and-a-half back to Eau Claire, found my wallet right where I’d left it, and drove 1.5 hours back to Minneapolis where I crawled into bed next to my wife. We ended up having a lovely time in Arizona!

There was the time we left home for a family reunion in Racine and forgot to close the rear hatch on the Ford Escort. We were 10 miles from home when we began to wonder why the wind was roaring with the windows closed. I consulted the rearview mirror and was surprised to see our belongings jettisoning onto the interstate.

There was the time Davyd forgot his shoes — any shoes — on an overnighter to Milwaukee.

There was the time I failed to show up for the bird hike I was supposed to be leading, or the time I forgot to pack a videotape for the TV interview I was directed to record in Menomonie. I drove back to Eau Claire and then back to Menomonie only to realize I’d forgotten the tape a second time. I’m not making this up!

To imply that I have the memory of an elephant would be … wait … what was I going to say?

So, of course, it’s also a Betchkal tradition to forget a key camping component. There was, for example, the time I left all the dining supplies at home. That night, at Castle Mound State Park, back in Wisconsin, Emerson and I had used crushed gray cardboard boxes as plates. We’d stopped at a gas station convenience store to “borrow” a few plastic spoons and knives. It was steak and corn on the cob for supper, so we didn’t need any pots or pans. We dug a shallow bowl in the ground, laid a tarp in it, then filled it with water. We dumped packets of salt (also courtesy of the gas station) in the water, soaked the corn for a bit, and roasted it on the fire ring grill. Food never tasted better!

My family might remember the campout where I forgot to close the trunk of the car when we went to bed. You know — the trunk of the car — where all the food was stashed. When we got up the next morning I realized my mistake. But ironically, the raccoons had left everything but the M & M-laden gorp completely intact. We had a wonderful campout!

There have been times when I’ve forgotten tent poles, tent pole joiners that had to be replaced with aluminum cans, and even the tent itself. Miraculously, we’ve managed to survive every time.

So we helped Davyd search the car thoroughly. No sleeping bag. Nada. And that’s where genius covered forgetfulness’s butt.

Fortunately, Emerson’s and my bags were accounted for, and we had an extra bag along to use as ground padding. The spare bag, unfortunately, had non-functional zippers. Fortunately, I had a cotton sleeping bag liner and a few safety pins. Positioning Davyd between us, we pinned the bag “closed” with the liner inside, bungy-chorded a stuff sack around his feet, and made a Davyd sandwich of him with functional bags on each side.

While lying on my back I watched five shooting stars streak the light-pollution-free sky over southeastern Utah. The wind blew in a late moonrise. The temperature that night dipped to 33 degrees. No one died.

Betchkal is a freelance writer from Eau Claire.