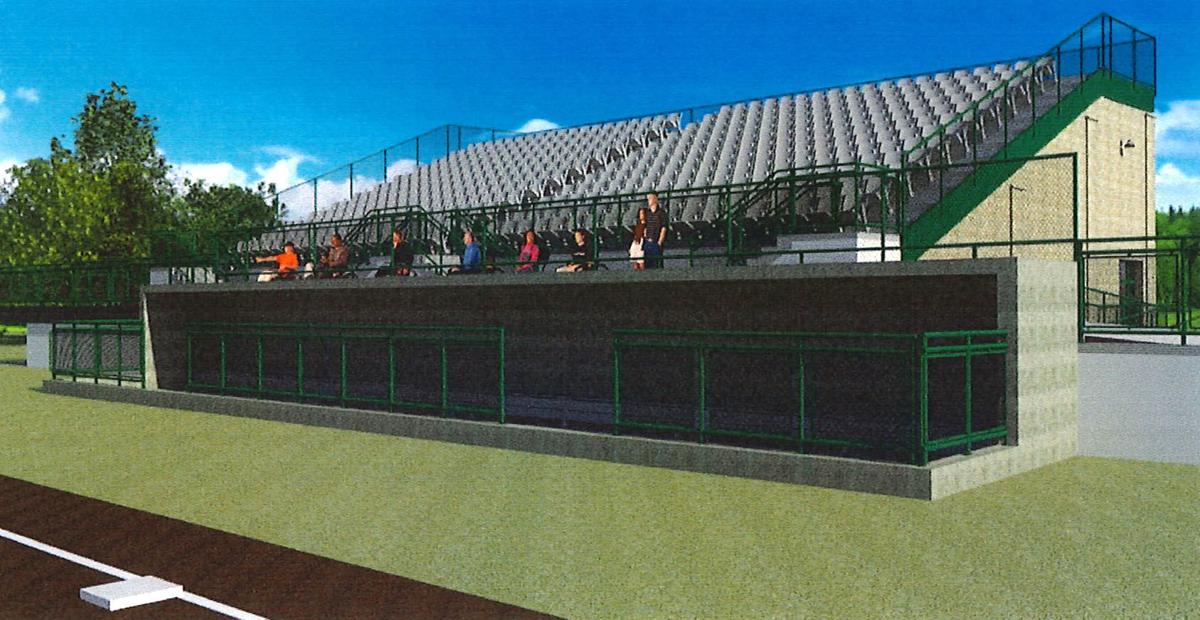 An artist’s rendering shows the design of upgraded permanent bleacher seating planned at Carson Park baseball stadium. New bleachers along the first- and third-base lines are included in a planned $3 million renovation of the stadium.

An artist’s rendering shows the design of upgraded permanent bleacher seating planned at Carson Park baseball stadium. New bleachers along the first- and third-base lines are included in a planned $3 million renovation of the stadium.

Carson Park baseball stadium may be steeped in history, but the venerable venue where Hall-of-Famer Hank Aaron made his professional debut also is showing its age.

That’s why city officials and baseball backers are putting their rally caps on and seeking to raise $800,000 to finish fundraising for a $3 million renovation to the 83-year-old ballpark.

The city of Eau Claire already has earmarked $1.5 million for the project, and the Eau Claire Community Foundation has received cash and in-kind pledges totaling $700,000.

“This is a historic ballpark, and we need to preserve that for the next generation,” said Jeff Pippenger, the city’s community services director.

The planned upgrades include adding permanent bleacher seating along the first and third base lines, larger dugouts, climate-controlled restrooms, expanded viewing areas for fans with disabilities and new concession and apparel areas.

The stadium, built in 1936, is the site of home games for the Eau Claire Express, the Eau Claire Cavaliers, the Eau Claire Bears, American Legion baseball, four high schools — North, Memorial, Regis and Immanuel Lutheran — and the planned return of UW-Eau Claire baseball in 2021. It also hosts the city’s annual Fourth of July celebration, the Shrine Circus, concerts and other community events.

In June, officials said they anticipated fundraising efforts for the stadium falling short after the first pitch and unveiled plans for a scaled-back project mostly funded by the city. But a volunteer fundraising group of baseball enthusiasts asked for more time to try to hit the mark, sparking a comeback attempt starting this week.

If the campaign is successful, officials hope to start construction in August and unveil the improvements in time for opening day in spring 2021.

“These improvements would bring us up to standards,” said Express manager Dale Varsho, adding that several of the team’s Northwoods League opponents have stadiums with better amenities than Carson Park. “It would be a huge, huge improvement for everybody that’s viewing the game.”

The renovation would improve facilities to the level people would expect when visiting a nationally known ballpark where baseball legends such as Aaron, Joe Torre and Bob Uecker got their start, Varsho said.

“If we complete some improvements, it will be one of the best parks, if not the best, in the state of Wisconsin,” he said.

The bleacher upgrades are the centerpiece of the renovation, as permanent, enclosed structures would replace temporary metal bleachers installed in the 1960s that are shuttled back and forth annually between the baseball and football stadiums in Carson Park. The existing bleachers present somewhat of a safety concern because they have gaps between the rows that some fans fear small children potentially could fall through, Pippenger said.

The new bleachers, designed to have a textured block facade intended to complement the historic Dunville stone grandstand, would have restrooms, concessions and storage areas built into the structures. Plans call for seating capacity to remain about the same.

The face-lift also would solve a problem in which the city can’t turn on the water in restrooms until May — and thus must rely on portable toilets for the beginning of baseball season — because of the risk of frozen pipes, Pippenger said.

Larger dugouts also should improve safety by stopping players from spilling out onto the field of play during games, he said.

Varsho said the improved fan experience resulting from the renovations has the potential to increase spectator turnout and even boost player recruitment for the Express.

“If you have a great ballpark, people will really want to play there,” Varsho said.

Mark Faanes, head coach of the Eau Claire Pizza Hut/Post 53 American Legion baseball team and chairman of the project’s fundraising committee, said he is optimistic community members will support what he called the “much-needed improvements” enough to help the effort reach its goal.

The fundraising campaign is coordinated by the Eau Claire Community Foundation.

“It’s just a wonderful way to bring the city together for a great pastime,” said Sue Bornick, interim executive director of the foundation.

Bornick acknowledged the community has a lot of major fundraisers competing for attention but said donors will give to what they love.

Pippenger said the project represents an opportunity for community residents to take care of one of the city’s iconic landmarks.

“Eau Claire is a baseball town. It’s in the DNA of Eau Claire,” he said. “The baseball stadium is over 80 years old now and many generations have come before us and made sure we’ve been able to play on that historic ball field. This is the time for our generation to step up and make sure that future generations can have the same type of ball-playing amenities and live that history.”