A combine harvests a field of industrial hemp near McVille, N.D. Corn and soybean farmers shouldn’t need to invest in any new equipment in order to grow hemp. 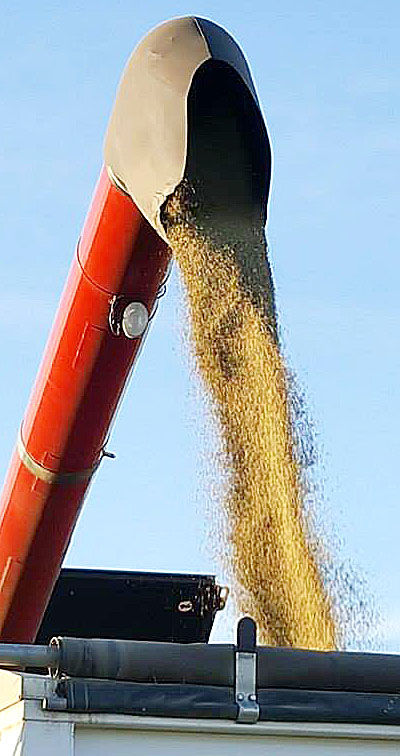 Hemp grain flows out of a combine into a truck in North Dakota. The grain is used in food pro­duc­tion, including snacks, gluten-free flour and ce­re­als, and hemp oil can be pressed into cos­met­ics, deck sealants, lo­tions and oint­ment. Stalks can be used in an­i­mal bed­ding. Some com­pa­nies have ex­pressed in­ter­est in us­ing it in cheese. 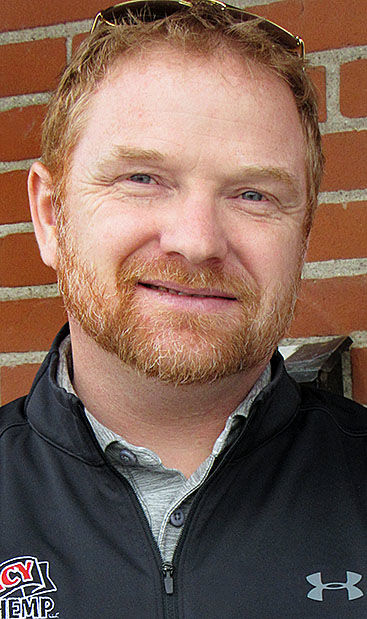 A combine harvests a field of industrial hemp near McVille, N.D. Corn and soybean farmers shouldn’t need to invest in any new equipment in order to grow hemp.

Hemp grain flows out of a combine into a truck in North Dakota. The grain is used in food pro­duc­tion, including snacks, gluten-free flour and ce­re­als, and hemp oil can be pressed into cos­met­ics, deck sealants, lo­tions and oint­ment. Stalks can be used in an­i­mal bed­ding. Some com­pa­nies have ex­pressed in­ter­est in us­ing it in cheese.

PRESCOTT — If Ken Anderson has anything to say about it, Wisconsin farmers will emerge again as national leaders in industrial hemp production, and it won’t take long.

“The forward-thinking individuals and farmers in Wisconsin are very refreshing,” said Anderson, president and founder of Legacy Hemp, who has led the fight to bring industrial hemp production back to Wisconsin after a 60-year hiatus.

The Prescott entrepreneur’s vision got a big boost last month with the state Legislature’s passage of a bill permitting industrial hemp to be grown again. Wisconsin — the first state in which a hemp bill has unanimously passed in both the Senate and the Assembly — is the 34th state to allow production of industrial hemp.

The state Department of Agriculture, Trade and Consumer Protection has 90 days from Gov. Scott Walker’s Nov. 30 signing of the bill to create rules for growing the crop before farmers can apply to participate.

“I plan on Wisconsin leading the country in hemp production once again, and it won’t take that long at all,” Anderson said. Considering the overall conservative political climate in Madison, “what just happened in Wisconsin is bigger than what Wisconsinites know.”

Anderson gives much of the credit for this watershed moment to the early support hemp received by the Wisconsin Farm Bureau Federation. Anderson and North Dakota hemp farmer Neil Reiten were well-received in a workshop this month at the organization’s convention in Wisconsin Dells. But getting here hasn’t been easy.

“The push, for my company, is to bring hemp into the ag realm rather than the niche market advocacy realm it has been stuck in for so long,” Anderson said. “The ag crowd is on board with industrial hemp; that’s why things are changing.”

The atmosphere for hemp now is a far cry from a decade ago, when few farmers were interested in jumping on the hemp bandwagon unless their father or grandfather had raised it back in the 1940s and 1950s, he said. “They had the conflation issue of marijuana and industrial hemp,” but more people have come to understand that industrial hemp — which has a lower level of the high-inducing compound THC, than marijuana, another type of cannabis — is not a drug crop.

“When the farmers are on the side of hemp, that’s when you win,” he said. “You can’t just push them off as the lunatic fringe.”

Anderson is hopeful that hemp can jump one more major hurdle: A narcotics license is still needed to grow industrial hemp, but federal legislation to remove it from the Controlled Substances Act list has been proposed; that would bring it out from under the Drug Enforcement Administration’s thumb to the oversight of the U.S. Department of Agriculture.

Wisconsin’s rapid, uncontested passage of a hemp bill is proof that “the tide has turned,” Anderson said, adding that he rarely has to explain the difference between industrial hemp and marijuana anymore. “I used to walk into a hostile environment; people thought I was just pro-marijuana,” he said. “It’s like a light switch was turned on.”

Legacy Hemp, with locations in Prescott, Albert Lea, Minn., and McVille, N.D., was established in 2015 and is the first — and so far only — domestic provider of certified hemp cultivars in the U.S. The company aims to provide the infrastructure to deliver hemp to developing markets and does all bulk wholesale, with no product branding. Legacy Hemp has sold most of the certified seed planted nationwide, according to Anderson.

He began working with hemp in 2009, when he collaborated with a housing developer seeking a new “dream technology hempcrete,” which is a biocomposite made of the inner woody core of the hemp plant and a lime-based binder. At the time, no industrial hemp seed was available in the U.S., and it had to be imported.

Chippewa Valley could get plant

UW-Extension hemp variety trials could begin in Wisconsin next year, and Anderson expects more than 4,000 acres of industrial hemp to be planted next spring in Wisconsin. Anderson also vows to bring a processing facility to the state by next fall that will employ about 16 full-time workers. Legacy Hemp is eyeing four sites — Prescott, Vernon County, Rock County, and between Menomonie and Eau Claire.

“Now that we have the markets and financial capabilities,” he said, “we need processing set up so we can process Wisconsin grain here.”

Most of the initial focus in Wisconsin will be on certified organic grain production, he said. De-hulled organic hemp seeds — high in protein and omega-3 and omega-6 and easily digestible — are widely used in food production.

“The largest market growth and profitability is in organic hemp,” he said.

It may be tempting to build Wisconsin’s hemp industry quickly, he said, but it’s important do this right from the start. That’s why he wants to work with “real farmers” who already know how to produce other crops.

“I don’t want to educate you on the basics of farming,” he said. “I want to take your expertise and put another very profitable crop in your hand.”

Not wanting to put the cart before the horse, Anderson strongly urges farmers to have a contract in hand before planting hemp because having farmers with bins full of hemp that they can’t sell would give the burgeoning industry a black eye before it even gets off the ground.

Prices fluctuate wildly — depending on grade, about 52 to 56 cents per pound for conventional hemp and $1.08 to 1.18 for organic — but stability will come once the crop is better known, he said. Organic hemp farmers can net as much as $1,000 an acre. Legacy Hemp will assume the risk in these early stages, he said.

“Farmers’ risk is the crop insurance part. We’re the ones taking the gamble when we contract,” Anderson said.

Hemp production will expand, he said, but only with contracts from more large-scale buyers like Post, he said. Grain can go into protein powders, snack foods, gluten-free flour, cereals and more; oils can be pressed into cosmetics, deck sealants, lotions and ointment, or sold as is. Stalks can be used in animal bedding. Some companies have expressed interest in using it in cheese.

“Finding out what we can do with this crop is exciting,” he said. “Wisconsin will figure out how to use this whole plant and put in products we’re not even thinking of right now. ... It’s a lot bigger than a few granola bars.”

While much of his recent time has been devoted to advocacy, Anderson said, he most enjoys working at the grass-roots level, with farmers.

“If I can make a farmer profitable without any subsidies and I’m making them more profitable than they are with crops that are heavily, heavily subsidized ... I feel good about it,” he said. “The economics of industrial hemp farming are very good for farmers.”