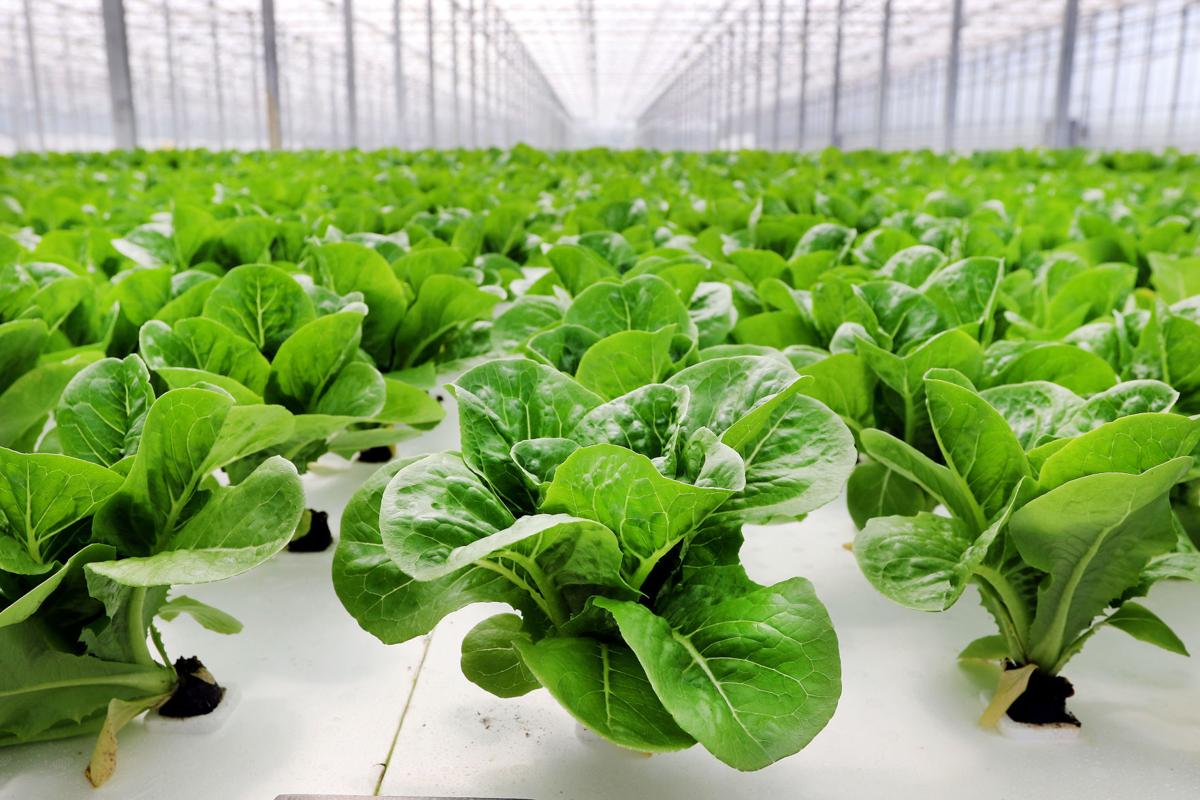 Heads of lettuce grow in the greenhouse during the grand opening of Superior Fresh on Thursday in Northfield. The aquaponics facility is one of the largest in the world that takes nutrient-rich water collected from raising fish and uses that water to fertilize and grow leafy greens. View more photos at LeaderTelegramPhotos.com. 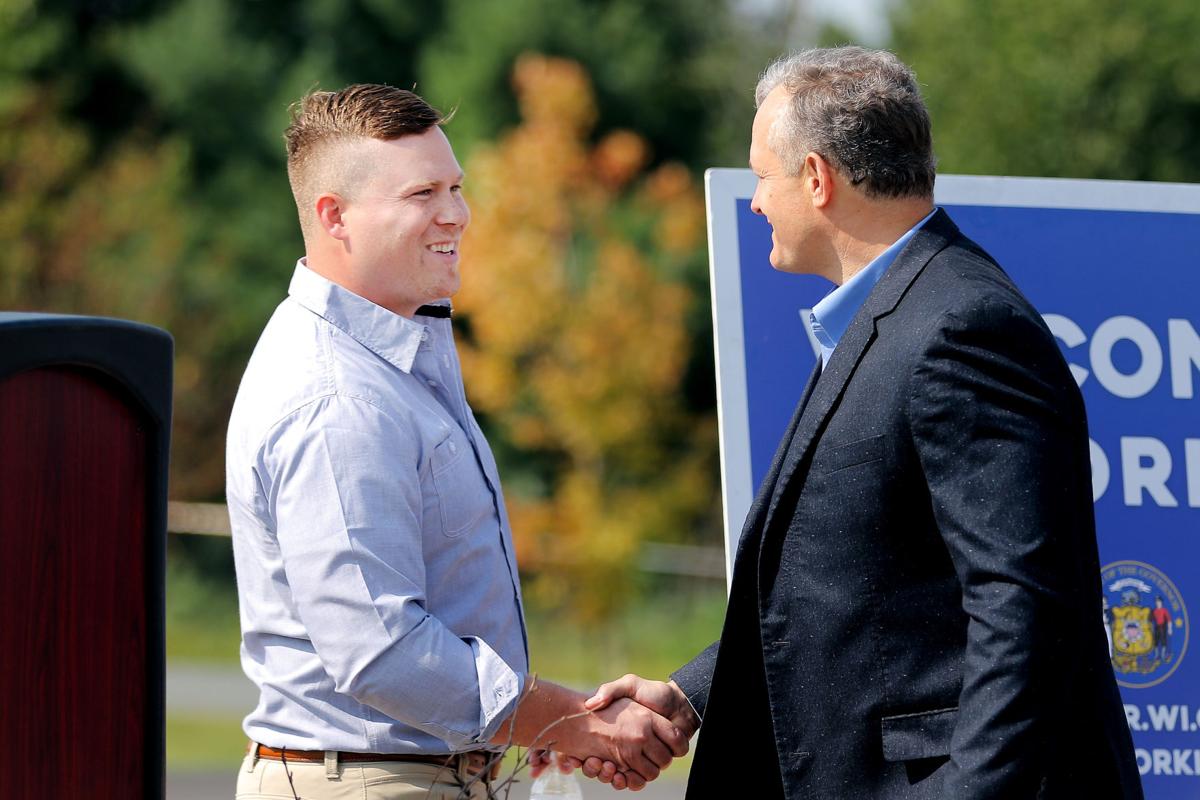 Chief operating officer Brandon Gottsacker, left, introduces Steven Summerfelt, one of the facility’s engineers and the director of aquaculture systems research at Freshwater Institute based in West Virginia, during the grand opening of Superior Fresh on Thursday in Northfield.

Heads of lettuce grow in the greenhouse during the grand opening of Superior Fresh on Thursday in Northfield. The aquaponics facility is one of the largest in the world that takes nutrient-rich water collected from raising fish and uses that water to fertilize and grow leafy greens. View more photos at LeaderTelegramPhotos.com.

Chief operating officer Brandon Gottsacker, left, introduces Steven Summerfelt, one of the facility’s engineers and the director of aquaculture systems research at Freshwater Institute based in West Virginia, during the grand opening of Superior Fresh on Thursday in Northfield.

NORTHFIELD — Atlantic salmon that once required a 4,000-plus-mile journey to the plates of hungry Midwesterners will feed those a little closer to their home in western Wisconsin.

A game-changer for the seafood industry, fish farm-greenhouse enterprise Superior Fresh, in the Jackson County town of Northfield, celebrated its grand opening Thursday as the first indoor Atlantic salmon farm in the country.

The operation is proving sustainable too, as the nutrient-rich water created by the Atlantic salmon and rainbow trout is shuttled underground to a nearby greenhouse, where it fills pools 12 inches deep, helping to grow leafy greens.

“The goal is to prove that we can build a facility like this anywhere in the world,” said Superior Fresh chief operating officer Brandon Gottsacker. “Whether it’s the city or desert where water is scarce, whether or not the regulation is difficult, this still feels good. We know how sustainable it is.”

The opening of Superior Fresh — the largest aqua-hydroponics system in the U.S. — earned praise from Gov. Scott Walker, who visited the site ahead of a state tour to promote his recognition of Thursday as Supper Club Day.

“The best way to be green is to make green or save green, and you’re doing exactly that here. You’re both being environmentally sound but economically sound as well,” Walker said.

Large distributors will work with Superior Fresh to carry the product to Midwestern restaurants and grocery stores, Gottsacker said.

When growth is abundant, leafy greens are donated to Feed My People Food Bank in Eau Claire.

At full production, the farm will put out 120,000 pounds of Atlantic salmon and 40,000 pounds of rainbow trout annually and grow about 2 million pounds of fresh greens each year.

That model will save tons of water.

“We’ve gone a whole ’nother step further by capturing that waste from the fish and using that nutrient rich water to grow the plants,” Gottsacker said. “What that does is allows us to use a whole lot less water.”

He said that if the aquaculture systems ran alone, they would use 50 to 60 gallons per minute. With its marriage to the greenhouse, about 4 gallons of fresh water is used per minute.

“But we also capture all that water in an irrigation pond and irrigate on 22 acres of land,” he said.

The system holds about 1.4 million gallons of water between the 123,000-square-foot greenhouse and the 1-acre fish farm.

Hoping to supplant even a small portion of the 96 percent of salmon imported from countries such as Norway and Chile, the hatched eggs, delivered from Iceland, aren’t exposed to any pesticides or harsh elements such as mercury.

In about two years, the salmon will go from weighing about 2 grams to 10 pounds.

“We all know what we’re doing,” said Nick Zaccaria, aquaculture systems manager. “If you forget what you’re doing, you’re reminded of it by the outsiders who tell you how cool it is.”

Once operations evolve to include processing of the salmon and produce on site, and a possible expansion to grow vine crops is underway, Gottsacker said, he expects to employ more than 100 people on-site.

“This is definitely the future of food production. We’re never going to feed the whole world this way, but we’re giving people more access and more options to better food,” he said.

The enterprise required a nearly $20 million investment, Gottsacker said, noting the entire production was five years in the making. Ground broke for the facility in July 2015, and the first seed was planted in the greenhouse in May.

“If a picture is a thousand words, this is a novel, and this isn’t science fiction,” said Steven Summerfelt, one of the facility’s engineers and the director of aquaculture systems research at Freshwater Institute based in West Virginia. “This is the future of environmental-controlled agriculture.”

Gottsacker, who received an education in aquaculture from UW-Stevens Point, was motivated to start the project after learning successful models for raising fish in such a system didn’t exist yet.

He partnered with his distant relative Karen Wanek and her husband, Todd Wanek, who serves as president and CEO of Ashley Furniture.

The site chosen to house the facility had already been cleared of many invasive species, with much of those efforts led by Karen Wanek. Native species were planted on the site in their stead.

While many sites were evaluated for the operation, Gottsacker, who refers to himself as a farmer, wanted the complex in familiar territory.

“We want people to know this is a farm,” he said. “We’re in farm country.”