Jamf, Minneapolis-headquartered software company that was founded in Eau Claire, had its initial public offering on Wednesday and now appears on the Nasdaq. Company executives and employees appeared on an electronic sign outside of the stock market’s building overlooking Times Square in New York. 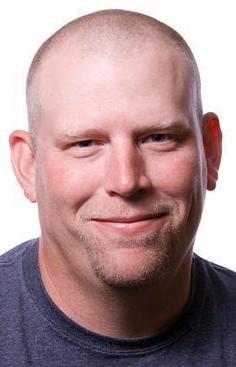 A software company born in Eau Claire made its debut Wednesday on the Nasdaq stock exchange and began trading higher than it was expected to fetch on its first day.

Jamf, whose executives and employees are working from home during the coronavirus pandemic, rang a virtual opening bell on the stock exchange with images of them appearing on a billboard outside the Nasdaq building in New York.

Currently the business’ longest-tenured employee, he has been with Jamf since 2006, seeing it grow as a small startup to the global company it has become.

Worldwide, the company has 1,300 employees — 300 of them working in Eau Claire, where the company occupies an office building next to Phoenix Park.

For many months the company has been making preparations to go public, Wudi said, which Jamf views as its best path to continue to invest, grow and support customers in the growing market of software related to Apple products.

“Being public answers the question of is Jamf going to continue to do what it is doing,” he said.

The company makes, sells and supports software that manages Apple-brand devices — iPhones, iPads and Mac computers — used by businesses, educational institutions, health care providers and other workplaces. Its customer base has continued growing, even through the COVID-19 pandemic, and had exceeded more than 40,000 by the end of June. Apple, the top 10 largest U.S. banks and many companies that rank high on the Fortune 500 are among Jamf’s customers, according to a filing with the U.S. Securities and Exchange Commission that announced the company’s intent to go public.

Jamf, which is headquartered in Minneapolis, had expected to get $26 per share for its initial public offering, but opened $20 higher than that on Wednesday morning.

In the days leading up to the initial public offering, expectations for the stock price had risen. Last week Jamf had forecast shares would be bought between $17 and $19, according to a filing with the SEC. On Monday, that had grown to $21 to $23.

Jamf expected net proceeds of about $319.7 million from shares the company sold in the IPO, according to a news release. Of that, $205 million would be used to pay off existing debt, the company stated in an SEC filing. The rest would be for general corporate purposes, including working capital.

“We may also use a portion of our net proceeds to acquire or invest in complementary businesses, products, services or technologies. However, we do not have agreements or commitments for any acquisitions or investments at this time,” stated a filing made by Jamf to the SEC.

Jamf was founded in 2002 by Zach Halmstad and joined by co-founder Chip Pearson the following year. Halmstad led Jamf as the company grew and became a larger player in the software industry, but he stepped away from it a few years ago. Dean Hager was hired to be CEO in June 2015 and continues to lead the company.

Texas-based private equity firm Vista Equity Partners acquired a majority share in Jamf in 2017 for $733.8 million. Vista will remain in control of the company, owning about three-quarters of its outstanding common stock, according to a filing with the SEC.