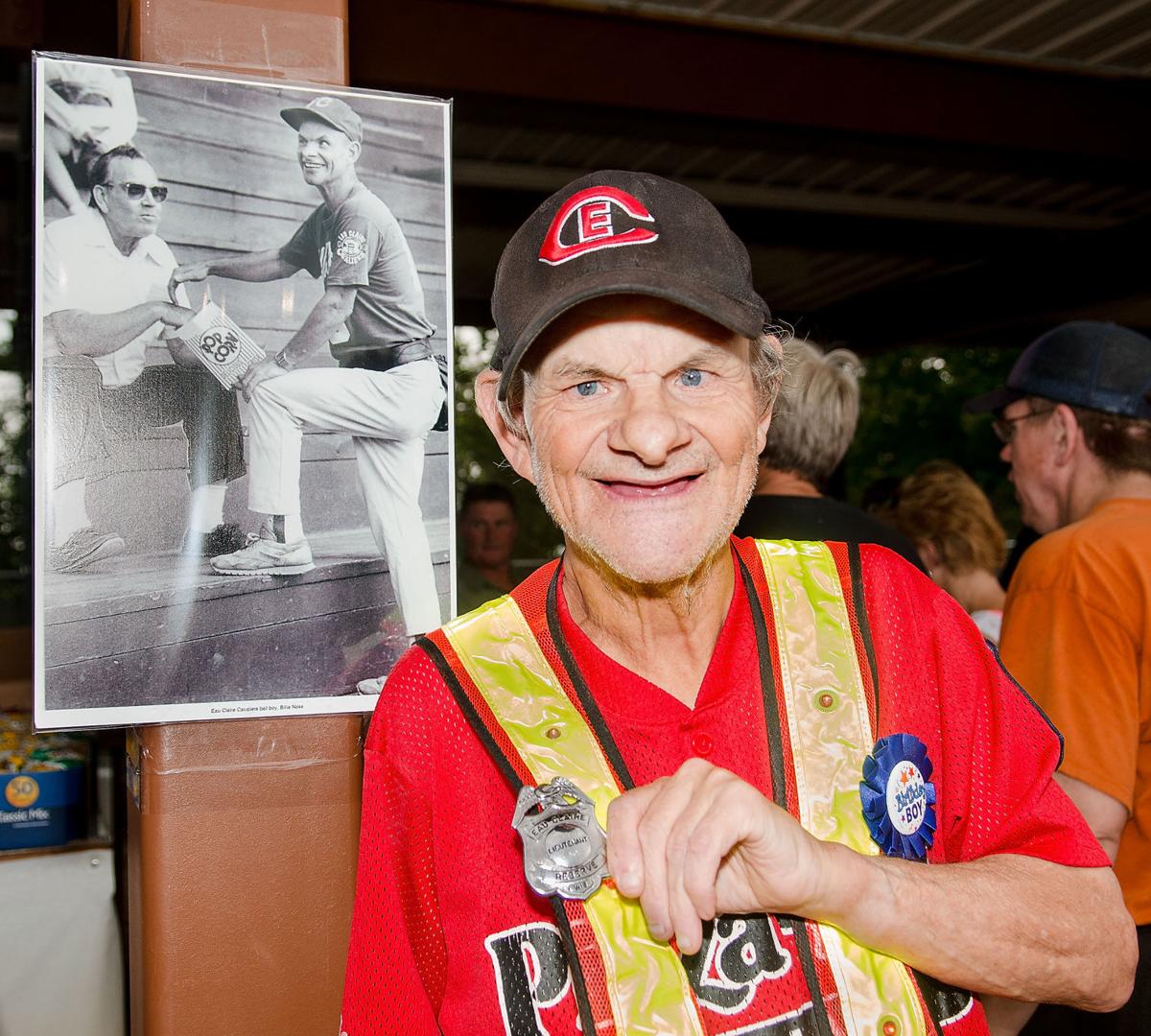 Billy Noss proudly displays his new, honorary Eau Claire Police Department badge presented to him on July 10, 2014, during a surprise 75th birthday party for him at Carson Park. A photo of a younger Billy is behind him. The longtime city resident and Carson Park baseball stadium fixture has died at age 78. 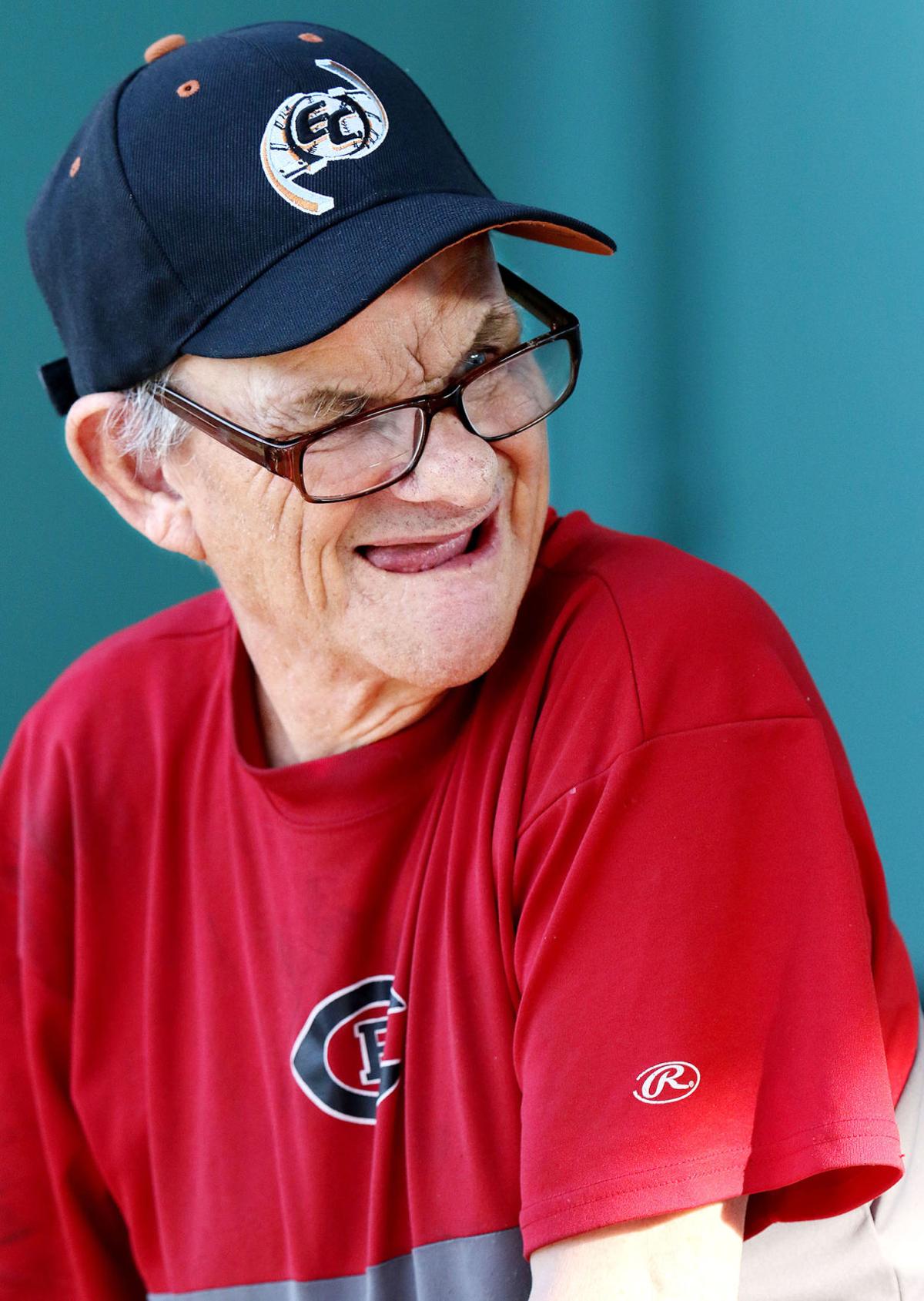 Billy Noss was a common sight at the Carson Park baseball stadium in Eau Claire, where he shagged balls and did other work for a number of local teams. 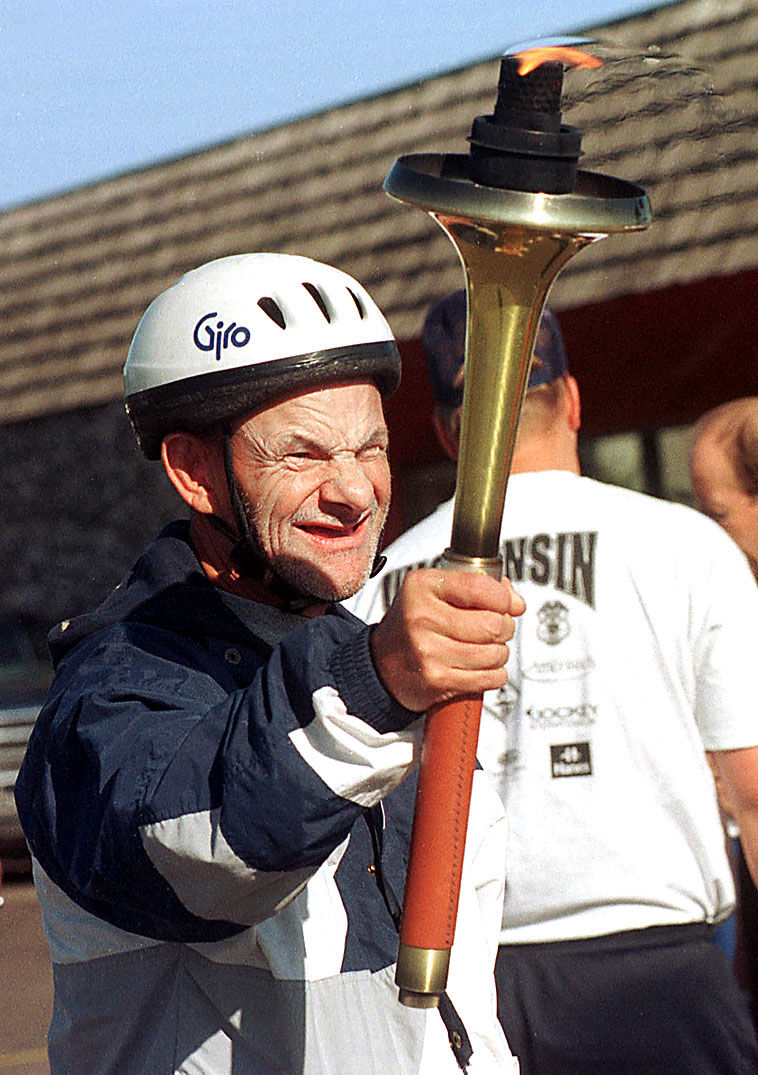 Billy Noss proudly displays his new, honorary Eau Claire Police Department badge presented to him on July 10, 2014, during a surprise 75th birthday party for him at Carson Park. A photo of a younger Billy is behind him. The longtime city resident and Carson Park baseball stadium fixture has died at age 78.

Billy Noss was a common sight at the Carson Park baseball stadium in Eau Claire, where he shagged balls and did other work for a number of local teams.

For decades, Billy Noss was a fixture at the Carson Park baseball stadium during summer afternoons and evenings, shagging balls hit out of play by members of the Eau Claire Bears, the Cavaliers and numerous local high school baseball teams.

Others knew about Billy after spotting him at high school and college basketball games at gyms across the region, where he often accompanied local sports radio announcers Dave Hanson and Hayes Callaghan.

Billy sightings also were commonplace on the sidelines at football games, and he could be found helping with security at the Country Jam USA music festival and other events in the Eau Claire area, simultaneously strictly enforcing the rules while excitedly interacting with anyone and everyone in his vicinity. And he was a Special Olympics athlete.

Billy, known for his enthusiastic demeanor and his visibility in the community, has died. He was 78.

Callaghan got to know Billy years ago, when Hanson became Billy’s legal guardian. The broadcast duo who covered high school sports games across the region became a trio.

“Everybody knew Billy,” Callaghan said. All the coaches, all the people everywhere we went, they seemed to know who he was. And after games, Billy would have more girls hanging around him than the athletes.”

Billy’s popularity was due to his energetic personality and kind heart, Callaghan and others who knew Billy said. Callaghan credits Hanson with ensuring that Billy led a meaningful, healthy life.

“His energy and his kindness, it totally trumped any kind of disability he had,” Callaghan said of Billy. “He was so energetic that nobody could believe he was 78.”

Billy’s visibility in Eau Claire and his impact on the community were evident by the many tweets and Facebook postings by a broad range of people and organizations as they learned about his death Tuesday. Groups and residents from across Eau Claire sent out social media messages remarking on their affinity for Billy, a Wausau native.

“Today is definitely a sad day in Eau Claire baseball,” a Facebook post by the Cavaliers baseball team states. “(Billy) truly touched the lives of everyone you met, and baseball games, especially Bears games, will never be the same without you.”

Billy received an honorary lieutenant designation, which included an official police badge, from the Eau Claire Police Department on July 10, 2014, for his 75th birthday. That honor was a recognition of Billy’s service to Eau Claire, officers said.

Billy had an affinity for law enforcement, those who knew him said. He often wore brightly colored security gear and sometimes a badge.

“Here he was, up there working, just wanting to be a part of this community,” Staniszewski said. “He is the perfect example of someone with a disability who wants to help.”

Many said they will miss Billy’s honest demeanor, his social nature and his dedication to local sports teams. Patrick Boughton said he got to know Billy during the past three years, when he has coached the Regis High School girls basketball team.

Billy showed up early to help at sporting events, Boughton said, and took part in everything from helping a local sports radio crew set up to directing traffic.

“He always had a smile on his face, and when you were around him, he could make you a little happier,” Boughton said. “We would come up from the basement locker room before the game, and Billy would be right there and say, ‘Hey Guy!’ just clapping away.”

When Regis football coach Bryant Brenner took the job a decade ago, he inherited Billy.

“Billy came with the team, just like the Rambler mascot,” Brenner said.

Billy had a special dedication to Regis football and took pride in keeping balls dry during games, Brenner said. “Billy was a great example of the idea that no matter how simple or mundane your job might seem, it is important to the success of the team. Billy always took his job seriously, no matter what.”

With Billy’s passing, his absence will be notable. Brenner will miss trips to Burger King with Billy. Staniszewski will miss seeing Billy directing traffic this July Fourth. Callaghan and Hanson will miss the third member of their broadcast team.

“It’s not going to really sink in until our right-arm man isn’t there at our games,” Callaghan said, “but we’re sure going to miss him.”